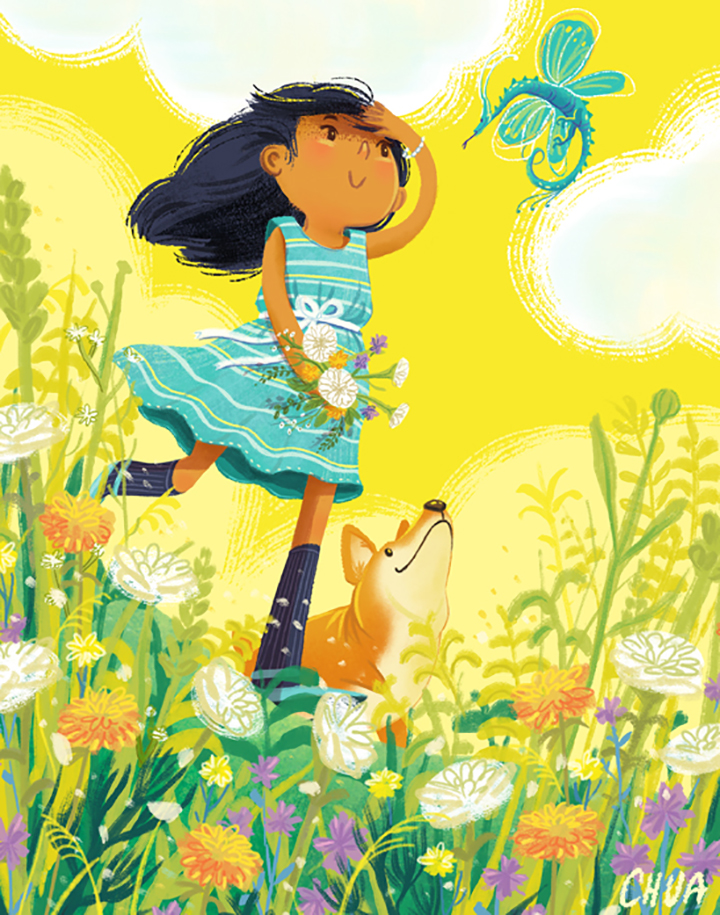 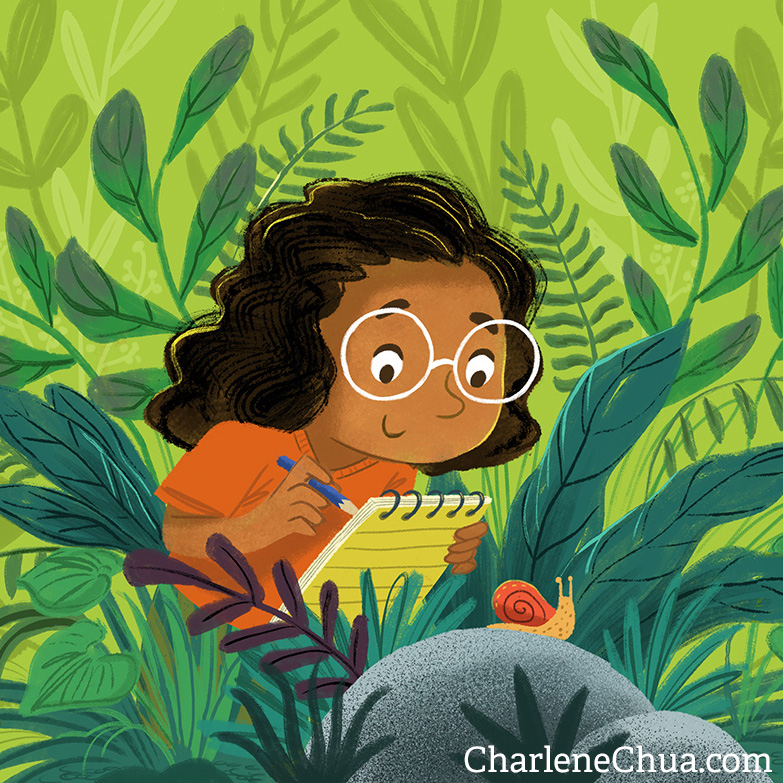 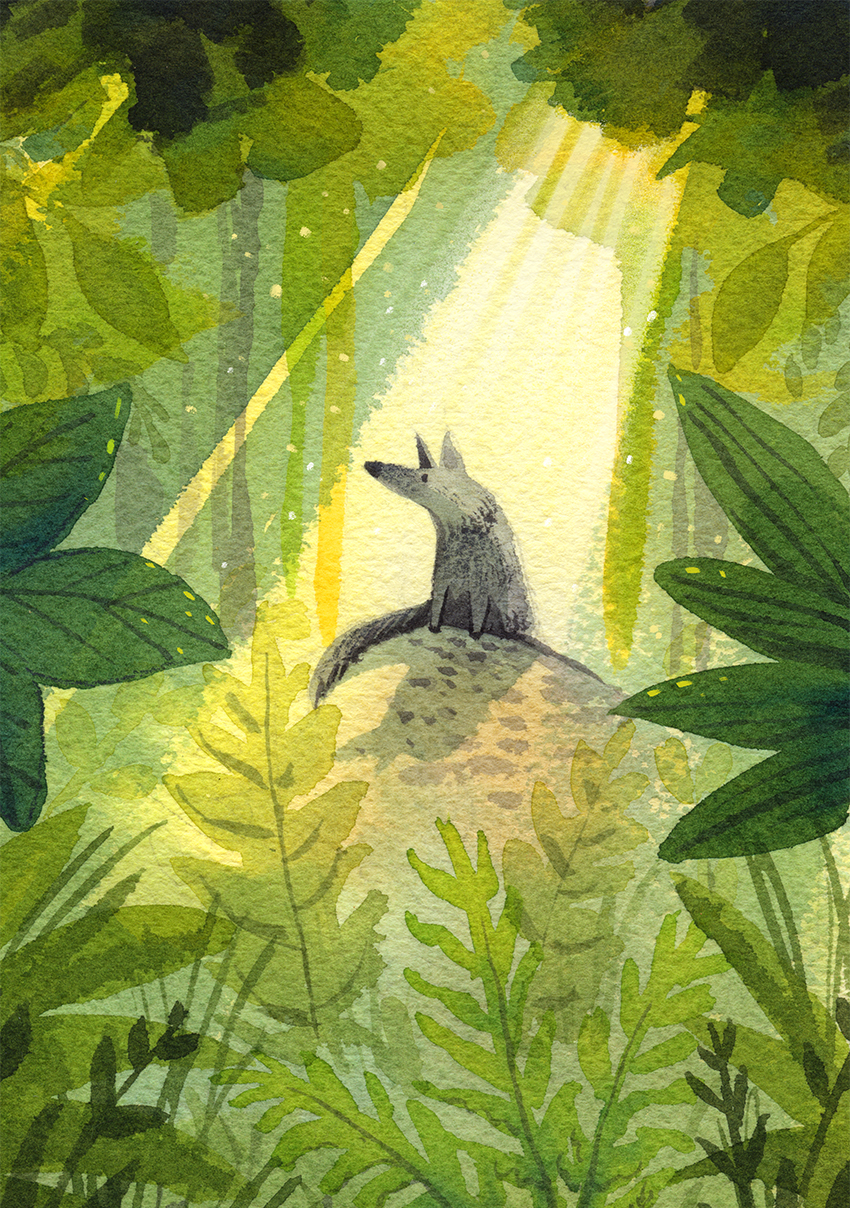 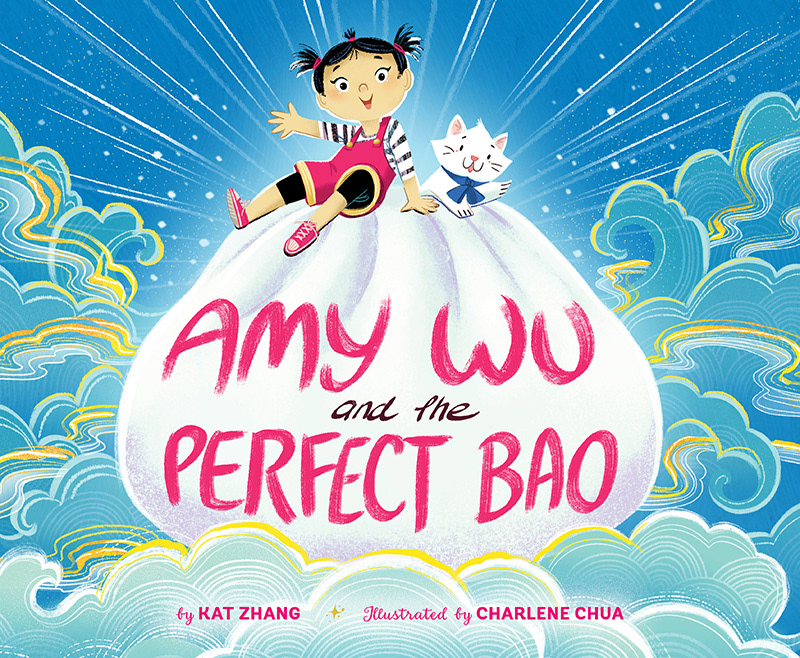 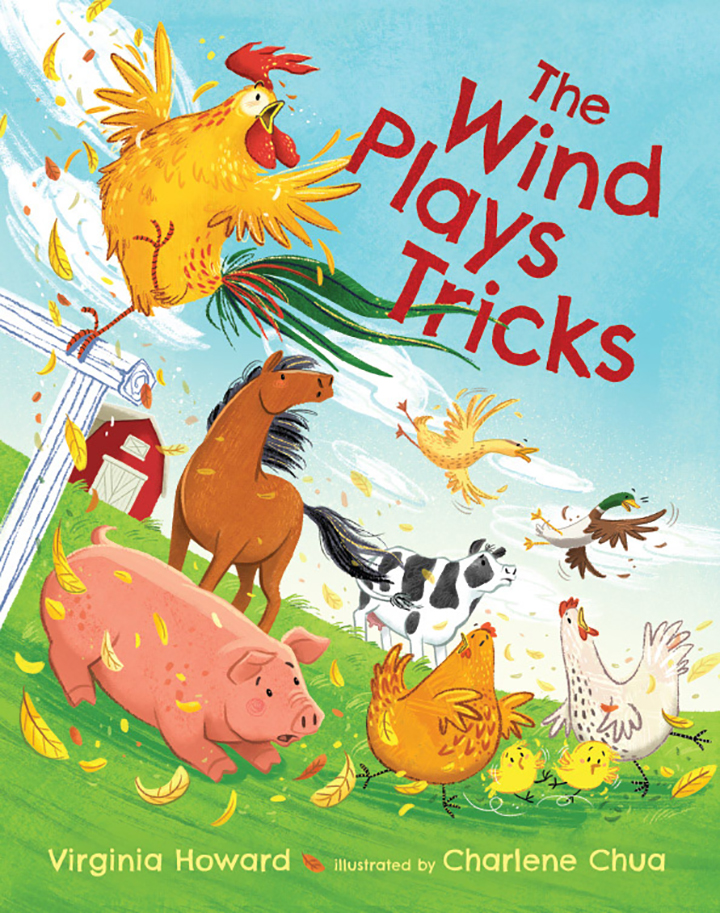 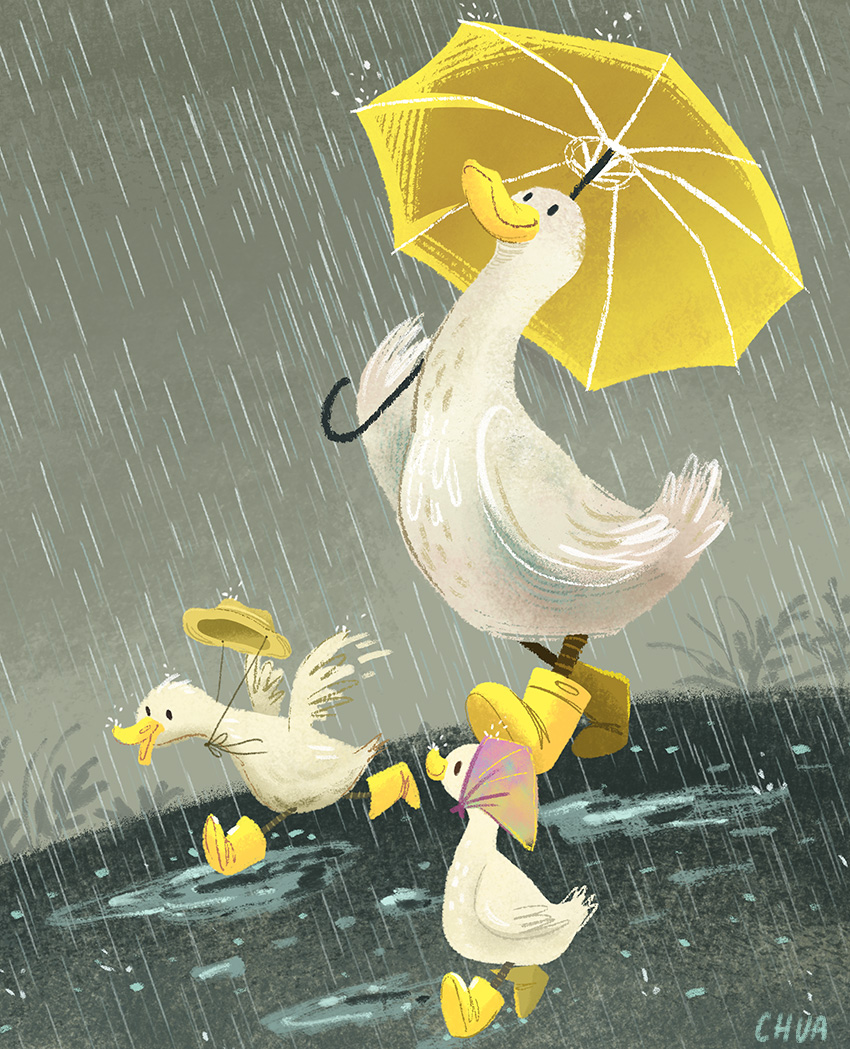 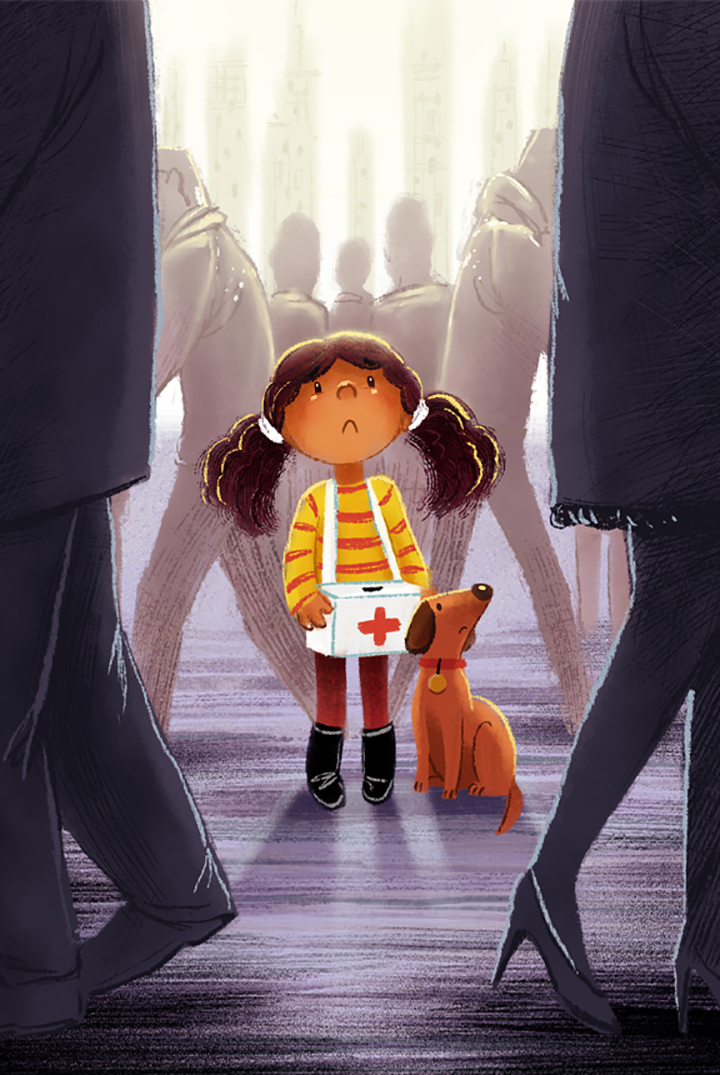 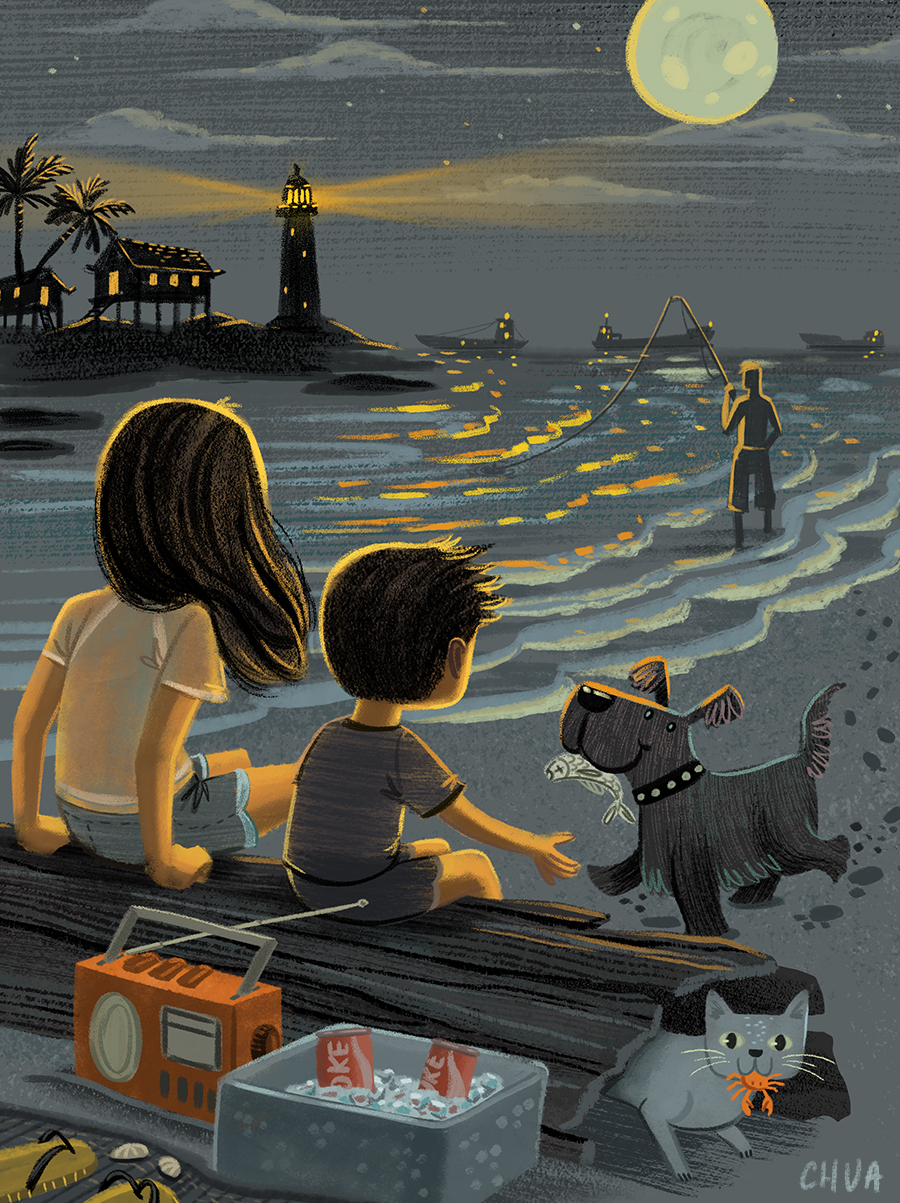 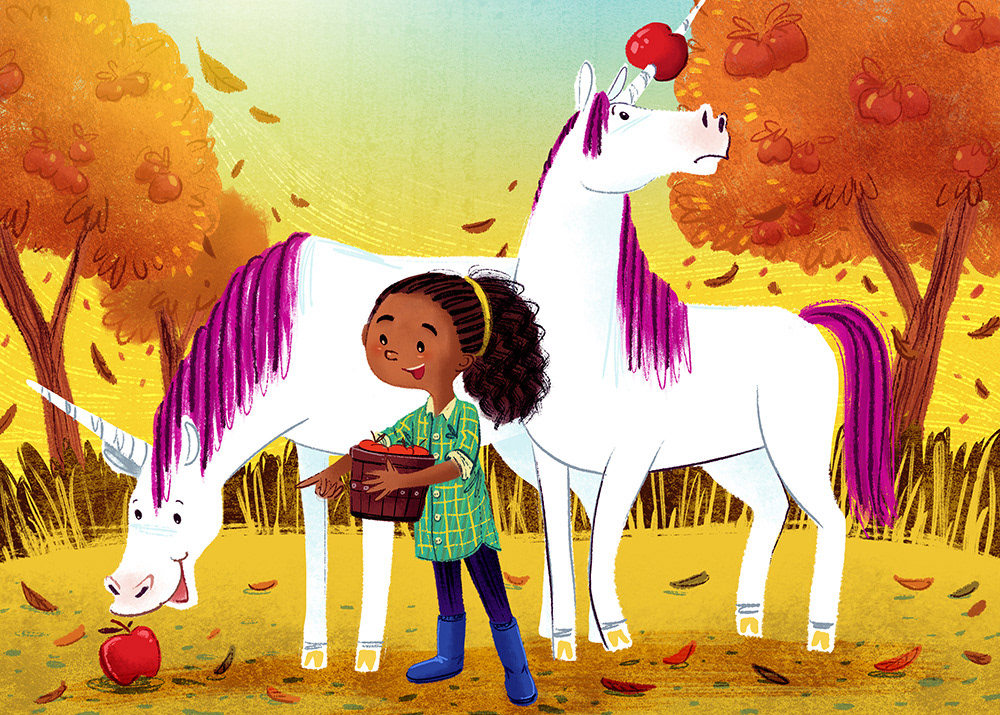 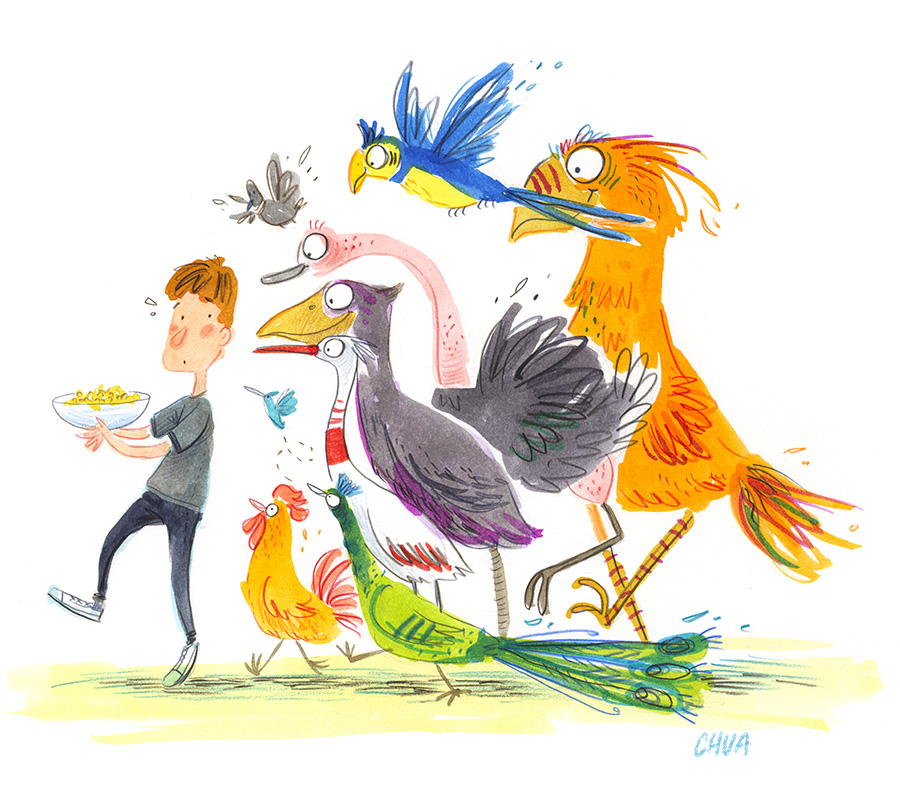 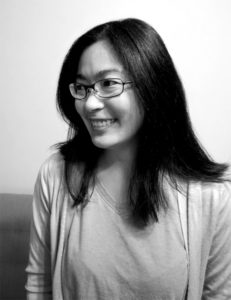 Hi! My name is Charlene, and I am a children’s illustrator. I have been a full-time illustrator for well over 10 years, working on various projects with different clients. A few years ago I decided to focus on the children’s market, and now I primarily illustrate for children’s books and magazines.

I currently live in Hamilton, Ontario. Hamilton has long had a reputation of a steel town and has been compared to Detroit in the US. However, what’s less known is that Hamilton also has a lot of green space, and is also the “Waterfall Capital of the World”. It’s also recently been a stand-in for various locations in movies and TV shows, including Umbrella Academy, Shazam!, The Handmaid’s Tale, American Gods and many others. There’s a pretty active music scene and some nice arts events.
I grew up in Singapore, and then lived in Toronto for 5 years, so in comparison, Hamilton feels like a smaller and quieter city to me. Sometimes I miss the bustle of bigger cities, but for the most bit, Hamilton’s pace is quite nice for me now. I live near a nice park and when the weather is not cold, I enjoy going there for walks with my husband. It’s an easy walk and usually, there aren’t many other people at the park, despite it being downtown and on the waterfront.

Sometimes I miss the bustle of bigger cities, but for the most bit, Hamilton’s pace is quite nice for me now.

The best thing is probably its location; Hamilton is not that far from Toronto, Canada’s biggest city, and is well connected to it by bus and train. At the same time, it’s far enough away that there isn’t quite the same crowding and pressure to keep up as there is in Toronto.
The worst thing is… kinda also its location! Hamilton is not that far from Toronto – so sometimes it can feel like all the cool stuff bypasses Hamilton in favor of Toronto. Hamilton seems to always be living in Toronto’s shadow, and I think the city (and by extension, its residents) sometimes have a bit of a complex about it.

Room to breathe.
When I moved to Hamilton, it was much more affordable than living in Toronto. Over time, that has made a difference for me and my husband, and I think we have both been able to develop our creative careers better thanks to it. Sadly, the cost of living in the whole Golden Horseshoe area (a semi-circular region in Southern Ontario consisting of various urbanized towns and cities) has gone up, and now Hamilton, while still comparatively affordable, is not quite the budget paradise it used to be.

I always liked drawing, and when I was a kid I wanted to either be a paleontologist or an illustrator (or more precisely, a comic book artist). Eventually, I studied Visual Communications in Singapore but did not complete the course. I got a job anyway in the tech industry, and worked in that for a few years doing design and later, project management work. It was an interesting time, but I missed making art. So I tried to get into illustration by cobbling together a portfolio and trying to get in touch with local magazines. I did get some illustration work but not enough to live off, so I got another full-time day job as a designer. Gradually I got more illustration gigs, and my partner secured a part-time job. Together, that gave me the chance to quit the day job and focus on illustration, and I have been illustrating ever since.

Generally so. If anyone had serious objections, they never voiced it to me. I think everyone was a bit concerned when I started freelancing full time. However my parents were also self-employed at various points, so perhaps it wasn’t a huge surprise for anyone that I also decided to go down that route.

I don’t really have any big goals and ambitions for my work anymore. When I was younger I had a list of things I wanted to achieve; some of it I checked off. Others I gave up on, changed my mind about, or simply lost interest in. It would be nice to win some book or illustration awards, but that’s not really the main goal when I work on a project, particularly a book project.
I guess if there’s an ongoing goal, then it’s that the books I work on make a positive difference in someone’s life.

I guess if there’s an ongoing goal, then it’s that the books I work on make a positive difference in someone’s life.

Hm… busy? I don’t know a single woman who is not busy with something or other. Most are busy juggling a career and relatively young children.

Not that I can think of offhand. I grew up in Singapore in the 80s and 90s; perhaps the only local female artist I vaguely knew about was a painter named Georgette Chen (due to her being included in a compulsory course in either art or history). When I was a kid, my dad was a photographer, and all his assistants were guys. When he talked about his art director or creative director clients or friends, they were also men. So my impression growing up was that while women did work in advertising and such, they weren’t the ones trusted with making the creative decisions.

I think illustration is thought of as one of the less gender-biased occupations. But that’s not to say the bias does not exist.  According to one survey, women make 32% less than men in the creative economy. It is difficult to find information specific to illustrators, but since we belong to the creative economy, I would not be surprised if those findings also apply. Certain types of illustration work have also long been heavily skewed towards male illustrators. Thankfully this has been changing, and I think it’s for the better as it allows for a wider variety of art styles to be applied to a greater number of things.

Look into yourself to see what you really like to do, and then take a good look at the available kinds of jobs.

Illustration can be difficult – formal education is expensive, and potential earnings afterward comparatively low. However, there are more opportunities for illustration opening up, and some companies seem to be hiring illustrators on staff. Look into yourself to see what you really like to do, and then take a good look at the available kinds of jobs. There’s no shame in supporting yourself with a non-illustration job while you try to build your client list; many illustrators start out or continue to hold jobs as designers in order to make ends meet.