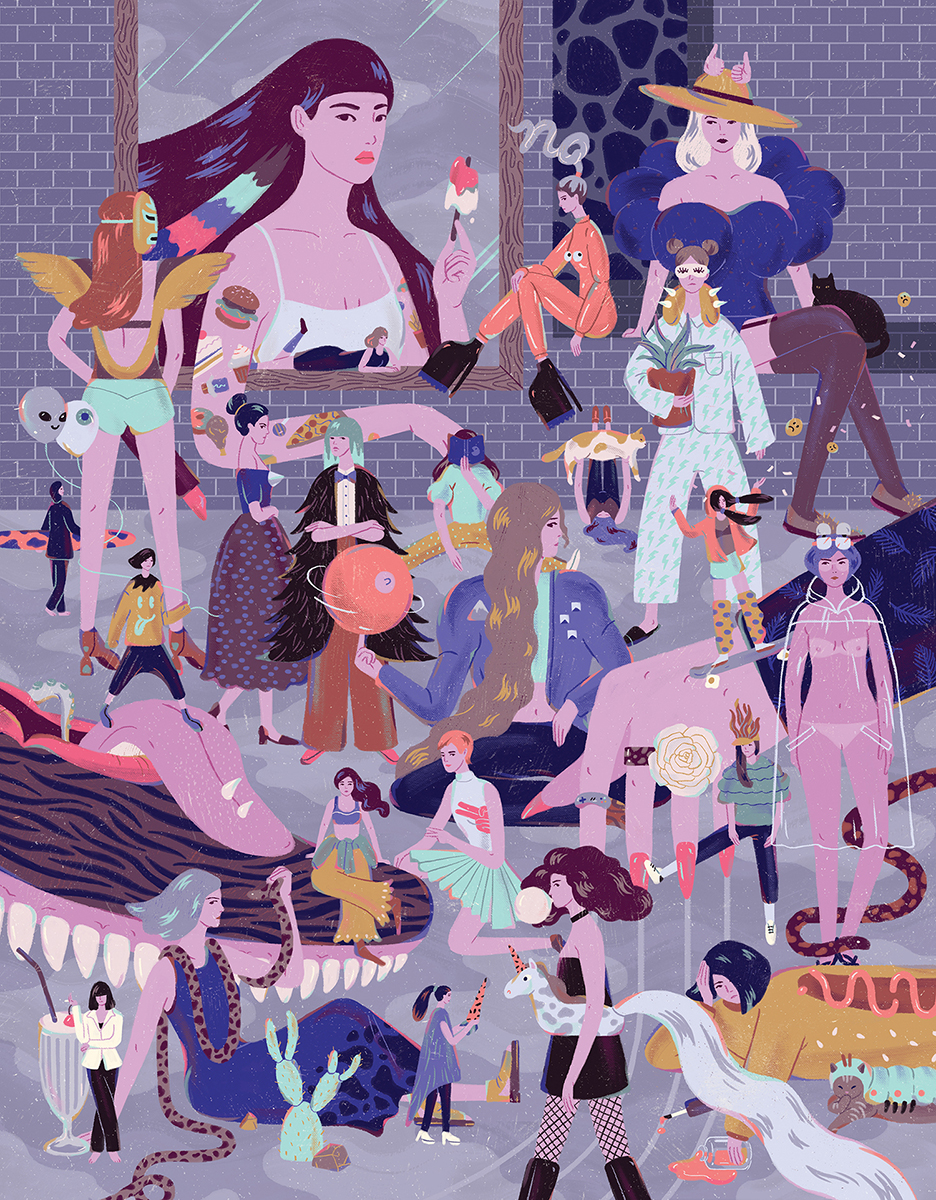 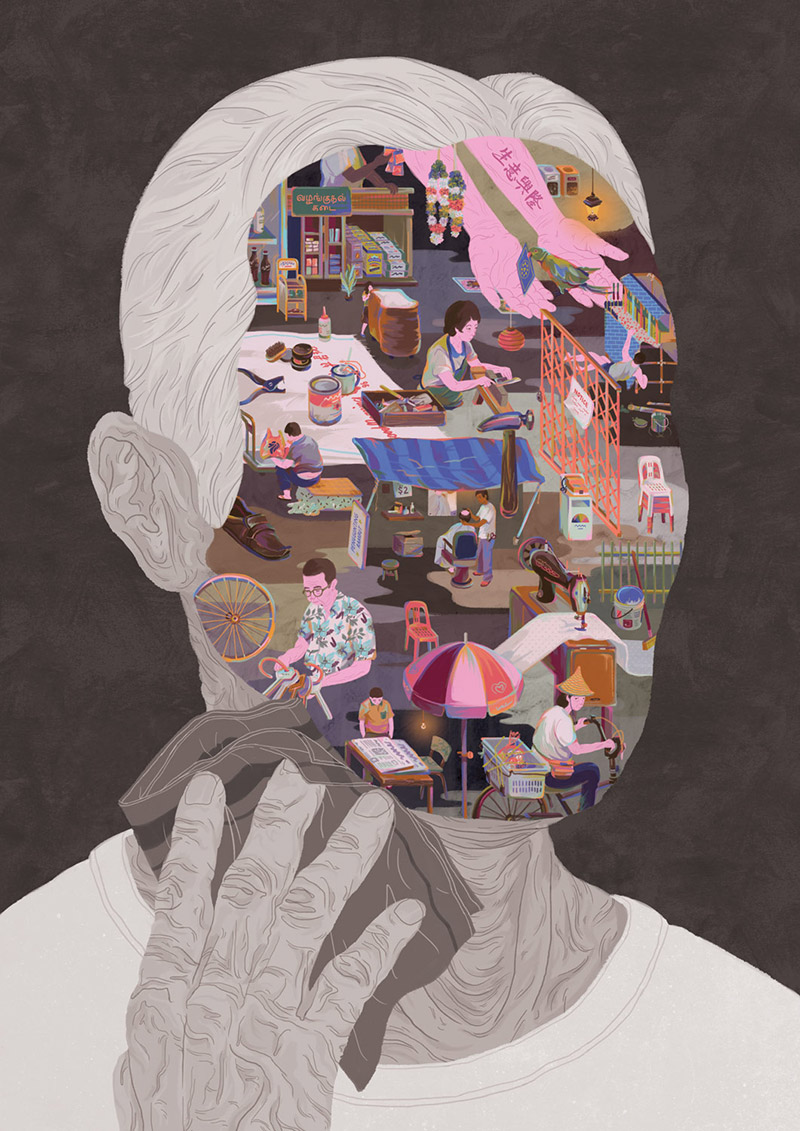 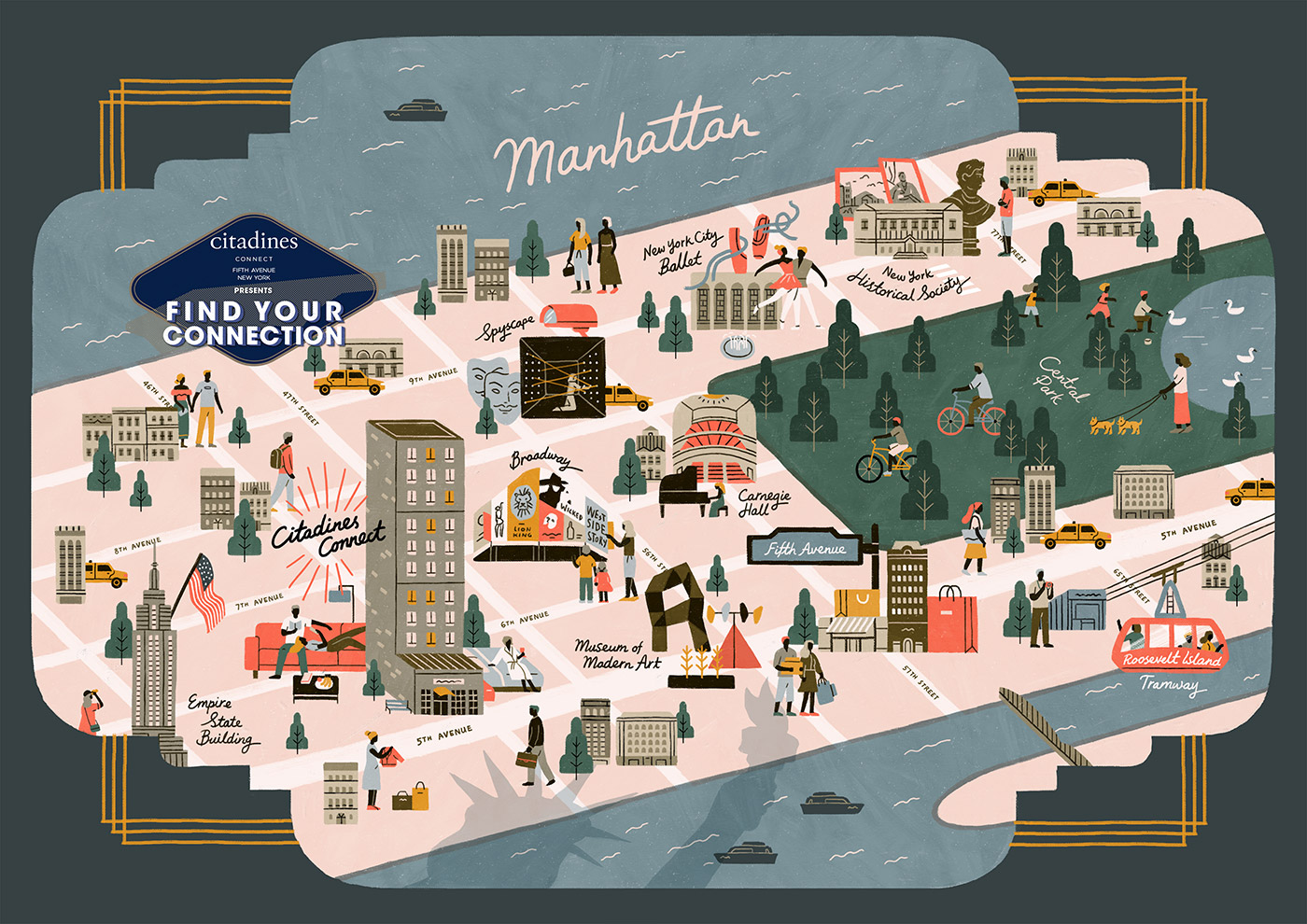 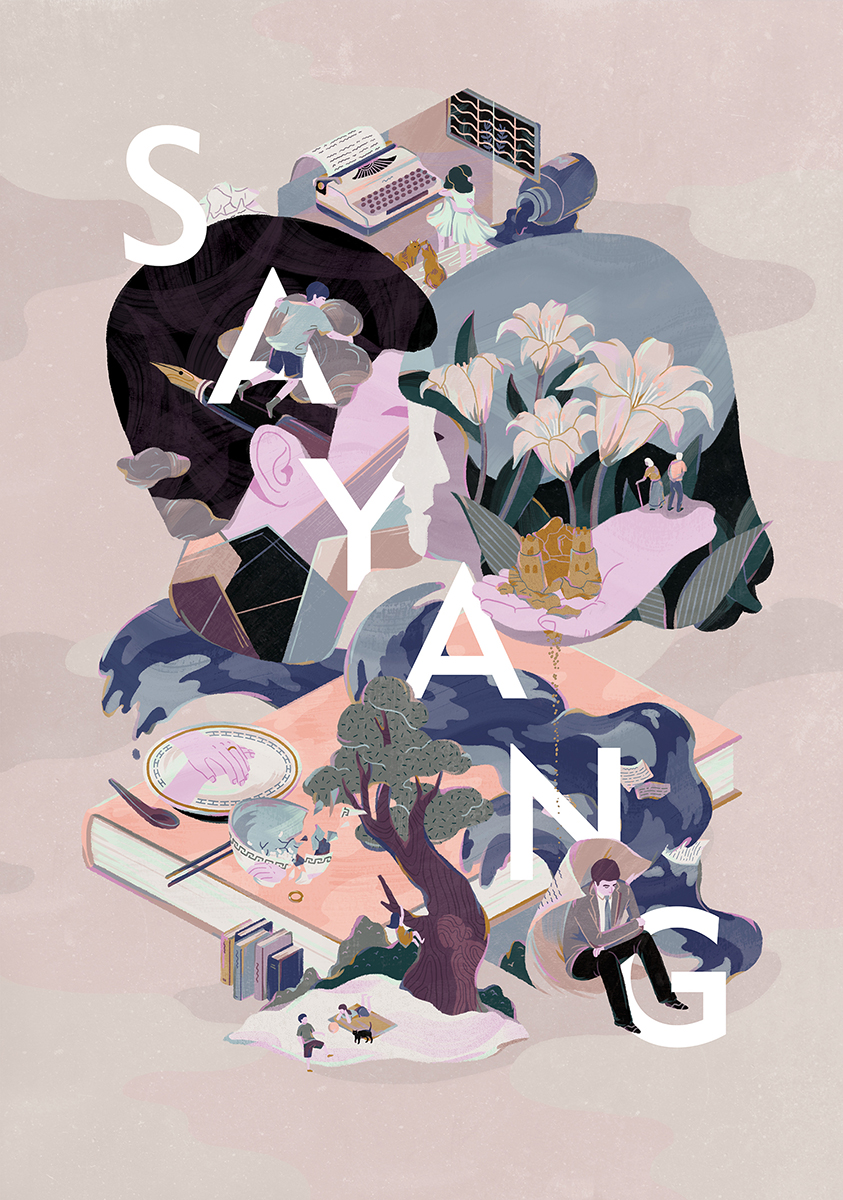 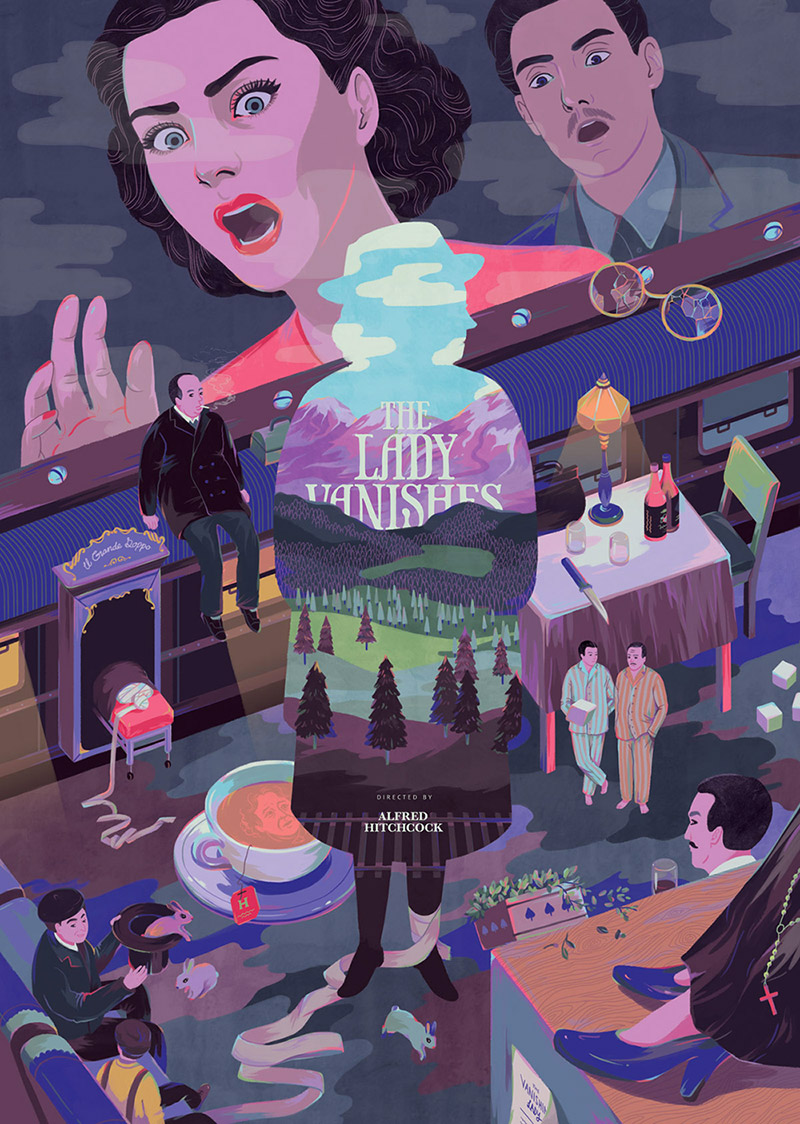 Since I was young when asked what I wanted to be when I grew up, the answer was always ‘artist’. Creating has always been a natural process to me, like an inner drive that pushes me to explore ways to try my hand in everything art and design – from making animations with Powerpoint, designing websites, painting murals, crafting brochures and banners for school, experimenting with photography, to obsessing over digital paintings and animated gifs. In a way, I consider being a creative a huge part of my identity.

Singapore has been my home for my entire life and I’ve never gotten tired of the local food, especially since we have plenty of options. Because we live in the tropics it’s hot and humid most times of the year with abundant rainfall so I’m thankful to be able to work from a home studio, making it bearable at least. In terms of the design scene, there are lots of opportunities for illustration work for local clients in a growing industry as evident in the many Singapore-related projects I have done over the past few years.

Singapore has been my home for my entire life and I’ve never gotten tired of the local food, especially since we have plenty of options.

The best thing is that Singapore is small and accessible thanks to the public transport systems and highways. Everything just feels like a stone’s throw away, which makes eating out, attending meetings, visiting museums and art events, meeting up with friends and family, and commuting, in general, a breeze.   Conversely, the small land mass means there’s only so many places where you can escape to when city life gets overwhelming, at least for me. Singapore is known as a ‘garden city’ with iconic green spaces such as the Bukit Timah Nature Reserve and Botanic Gardens which is a UNESCO World Heritage site, but personally, I would take cycling in the countryside or hiking a forest trail in Japan over these any day.

Having graduated from design school, I landed my first job as a digital designer at the amazing design agency, Kinetic. Back then I was already familiar with digital illustration so I jumped at every chance I had to incorporate my art into projects at work – particularly for Maki-San, a branding project in which I was highly involved. From there I was able to develop my illustration style using a mashup of psychedelic colors while maintaining a degree of realism in the subject. Hugely enticed by the idea of making a living from illustration, I left the company to work independently and have been doing so for over 4 years now.

For people of my parents’ generation, there is definitely a stigma on kids choosing a creative career or even majoring in art or design, as being a path with bleak future prospects, but I’m extremely grateful and lucky that my parents were fully supportive of me. They’d let me know that whatever decision I made they would stand behind it, even to the extent of offering financial support when it was tough when I started freelancing.

For people of my parents’ generation, there is definitely a stigma on kids choosing a creative career or even majoring in art or design, as being a path with bleak future prospects, but I’m extremely grateful and lucky that my parents were fully supportive of me.

Professionally I would like to make time for personal work, reinvent my illustration style, experiment with different mediums, work with clients from all over the world (hopefully traveling being a part of it) and push for creative freedom in otherwise mundane commercial projects. If an existing client returns to commission new work, I would already consider our collaboration a success so I’m hoping it will happen often.

I’m a huge fan of aesthetics, prop design and cinematography in movies so it would have to be a filmmaker of course. And the first name that comes to mind is none other than Wes Anderson.

Apart from my mum, the women I choose to surround myself with – close friends, schoolmates, a couple of friends from the same industry – embody great qualities. They are fiercely protective of people in their lives, selfless, supportive and I feel reassured knowing that they truly have my back as I have theirs.

Not while growing up, only because I hadn’t been very aware of the creative scene then, but one of my biggest inspirations when I first thought about becoming an illustrator was (and still is) MessyMsxi, an immensely talented, well-established and humble artist, whom I eventually befriended. Her work never fails to fascinate me. I would describe it as beautiful, insightful and heartfelt. She also very kindly reached out and introduced me to other local illustrators back when I knew no one else!

As a female creative, though much less so than in other male-dominated industries, there have been times when I felt I was not being taken seriously and that my opinions didn’t matter. If there’s a silver lining to this, it’s that I could see it as a lesson to grow my confidence and hone my creative intuition. Just so I can prove them wrong.

As a female creative, though much less so than in other male-dominated industries, there have been times when I felt I was not being taken seriously and that my opinions didn’t matter.

– Figure what you want in your career, plan the necessary steps to get there and work relentlessly towards your goals.
– Showcase only your best works, or the kind of projects that you want potential clients to commission, on your portfolio websites. On the other hand, Instagram is great for sharing your process and other experimental work.
– When it comes to dealing with clients, don’t be afraid to speak your mind on the creative direction or if something isn’t working for you. It’s also good practice to offer an alternative solution to the problem.