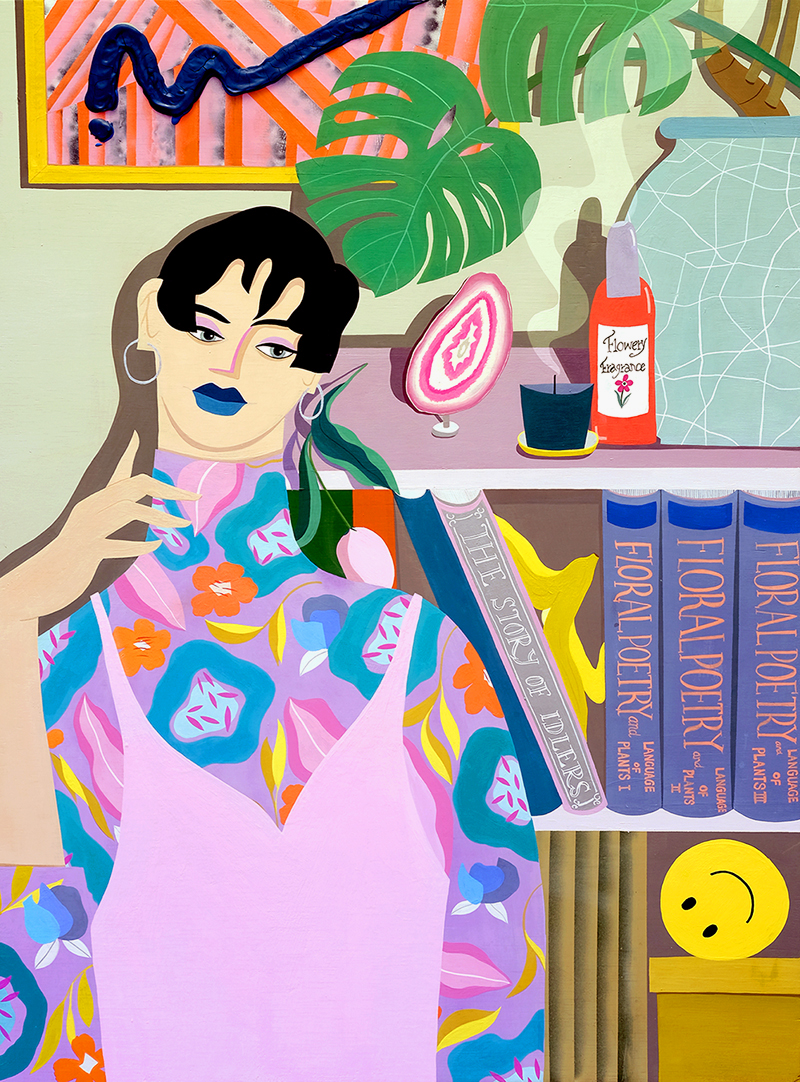 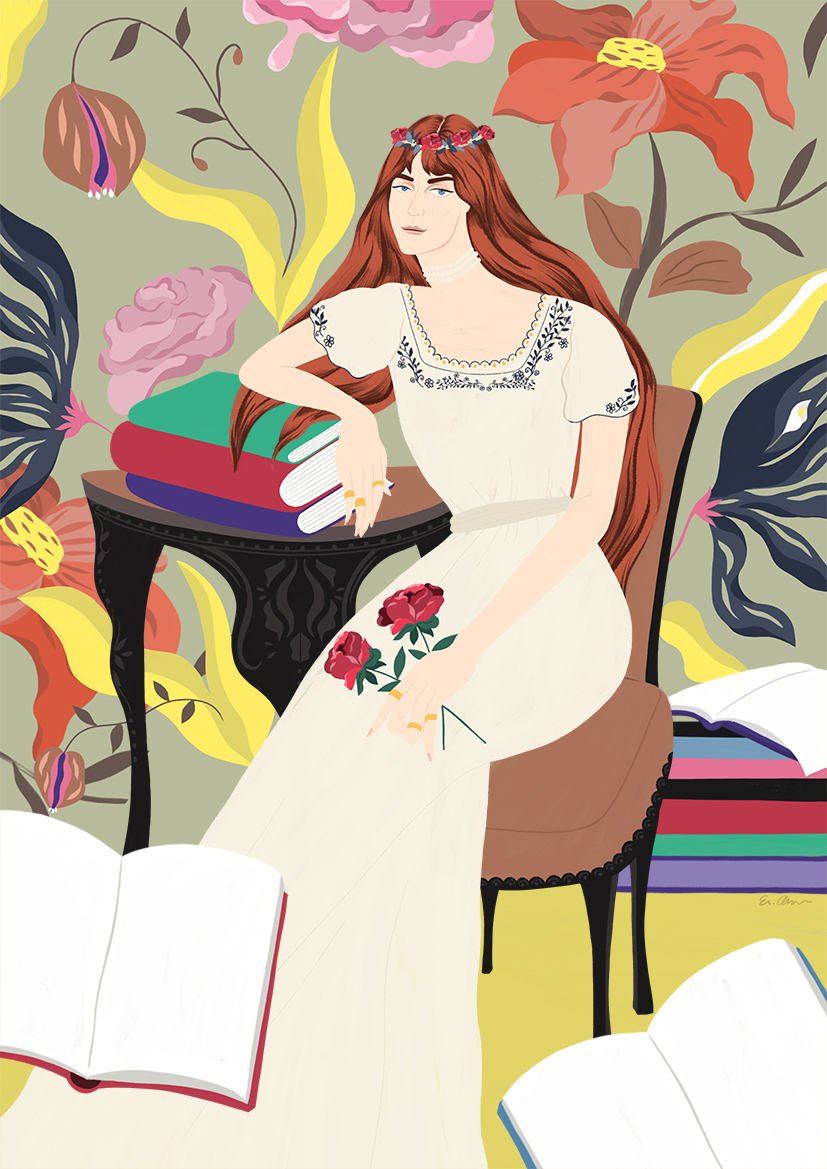 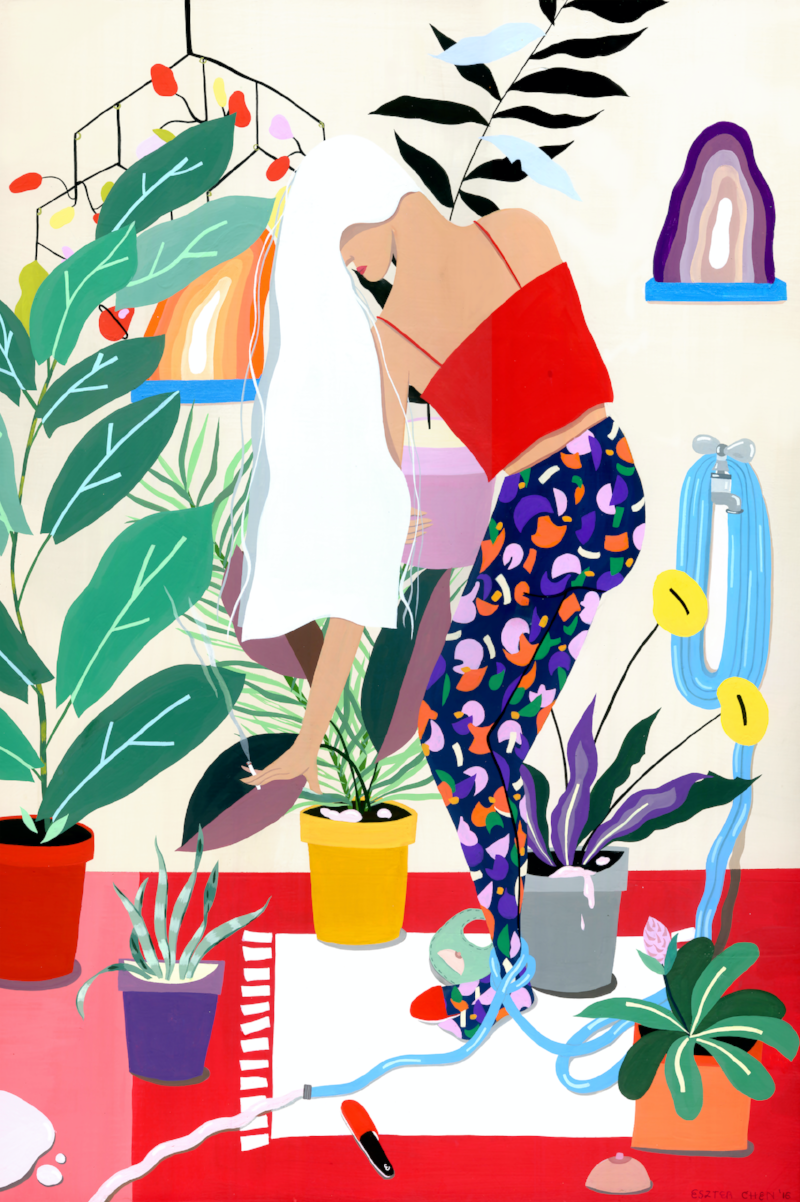 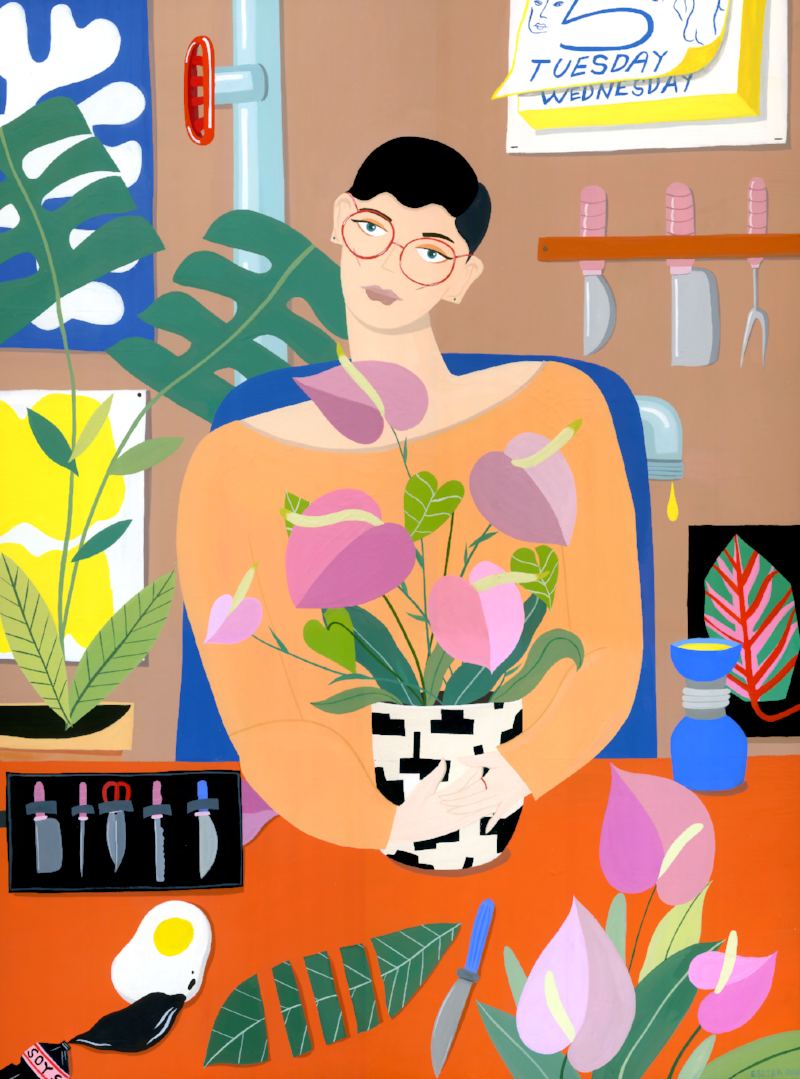 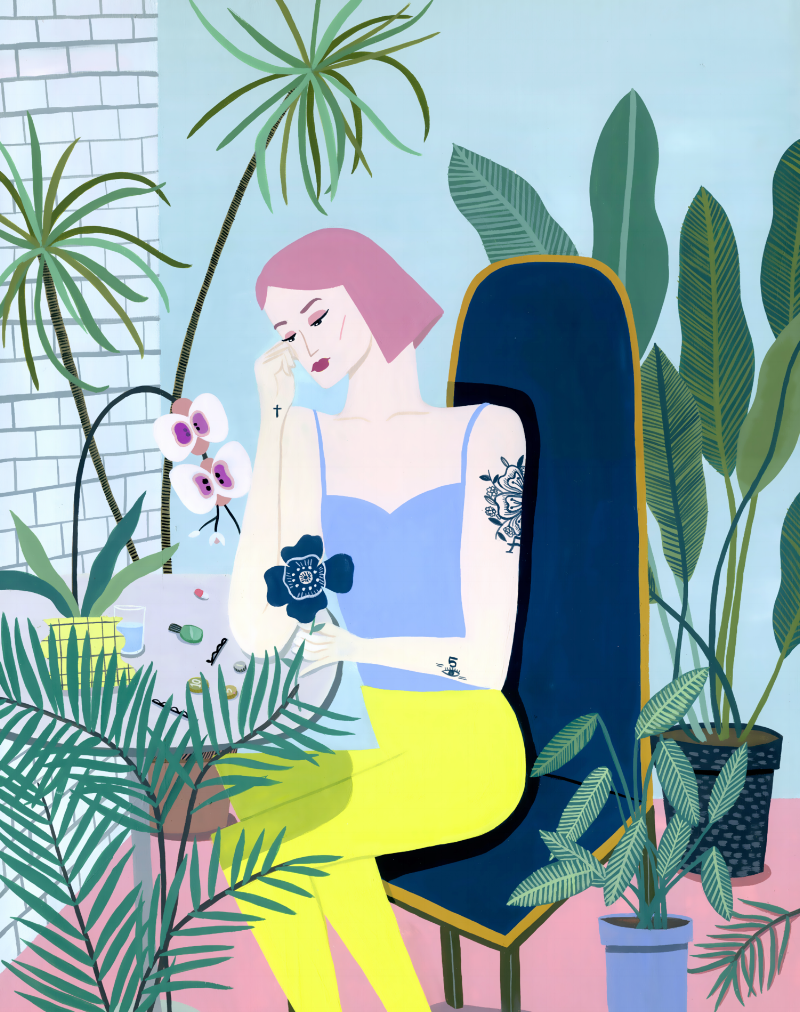 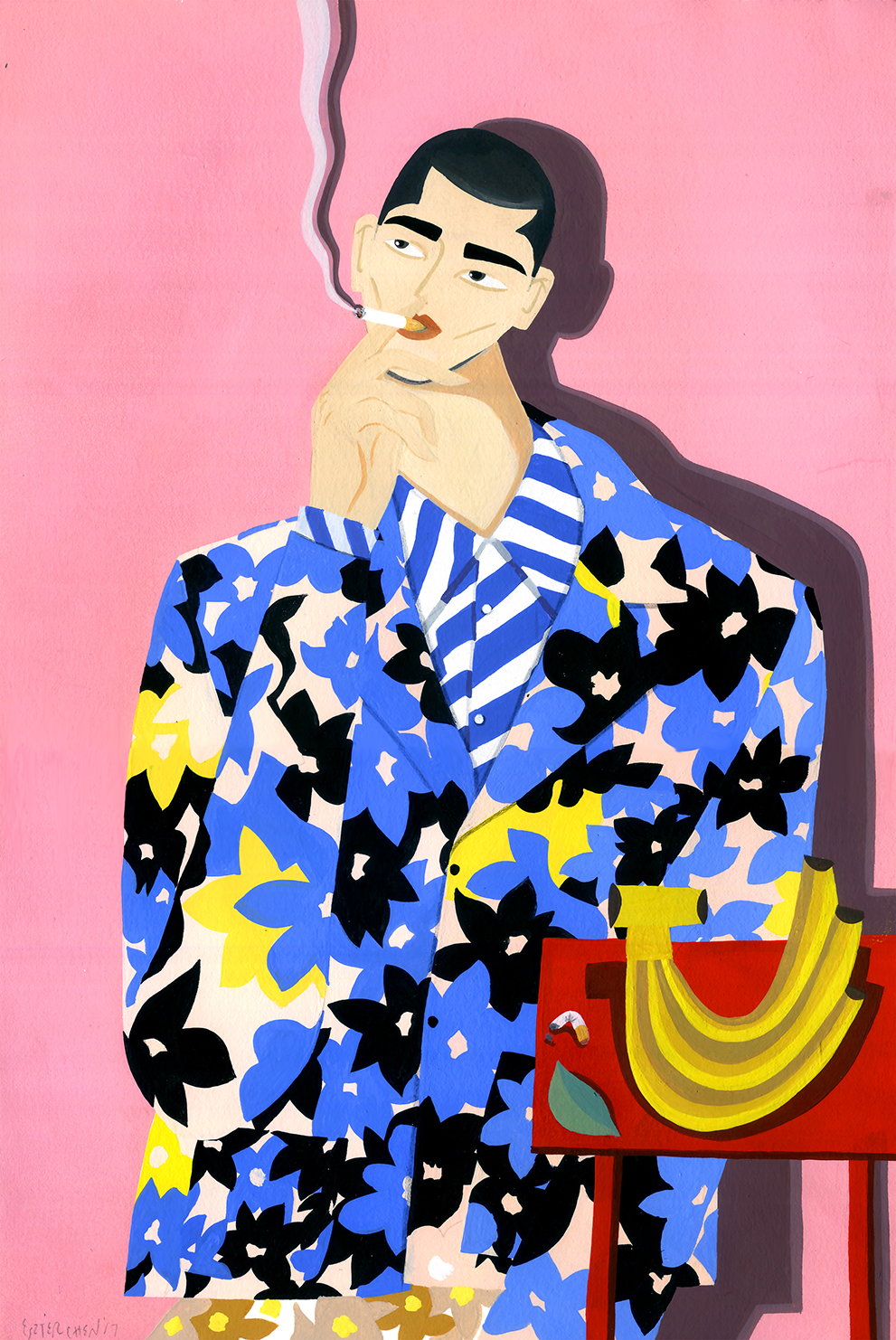 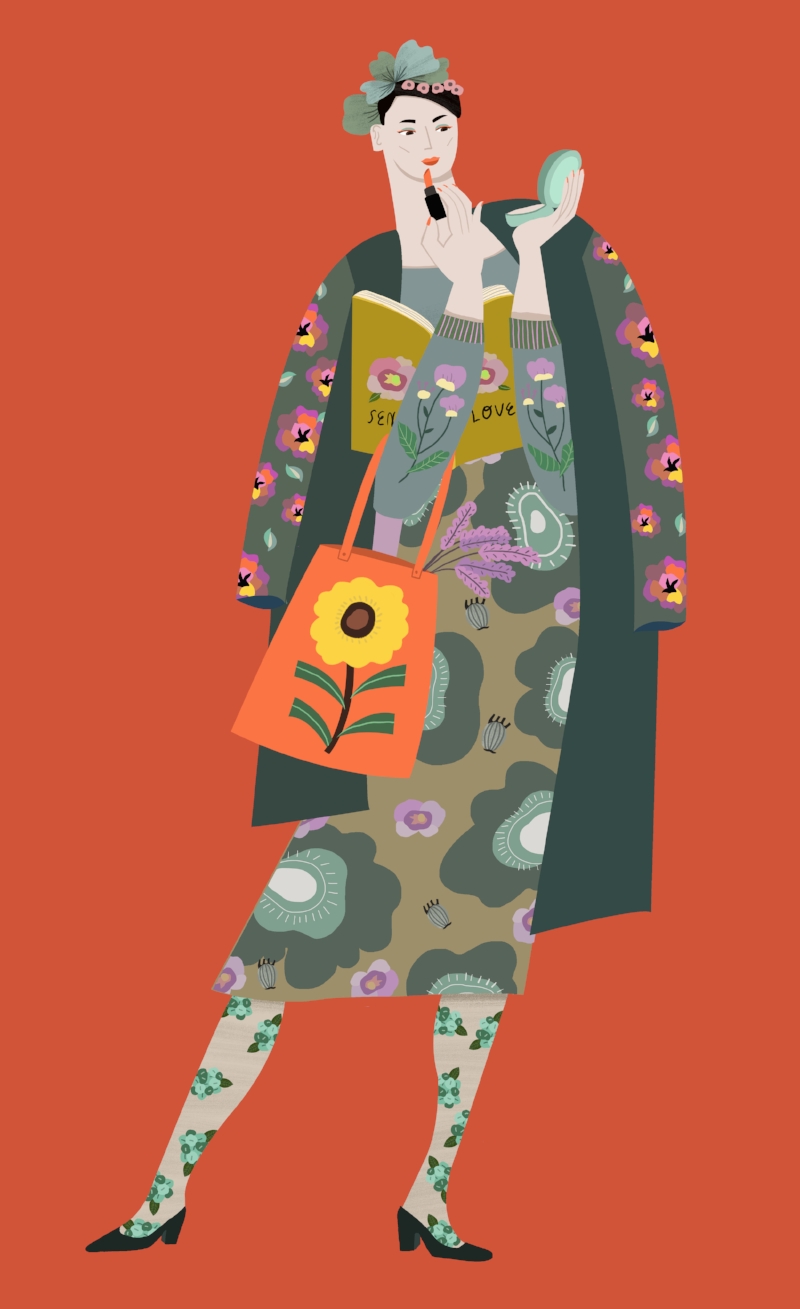 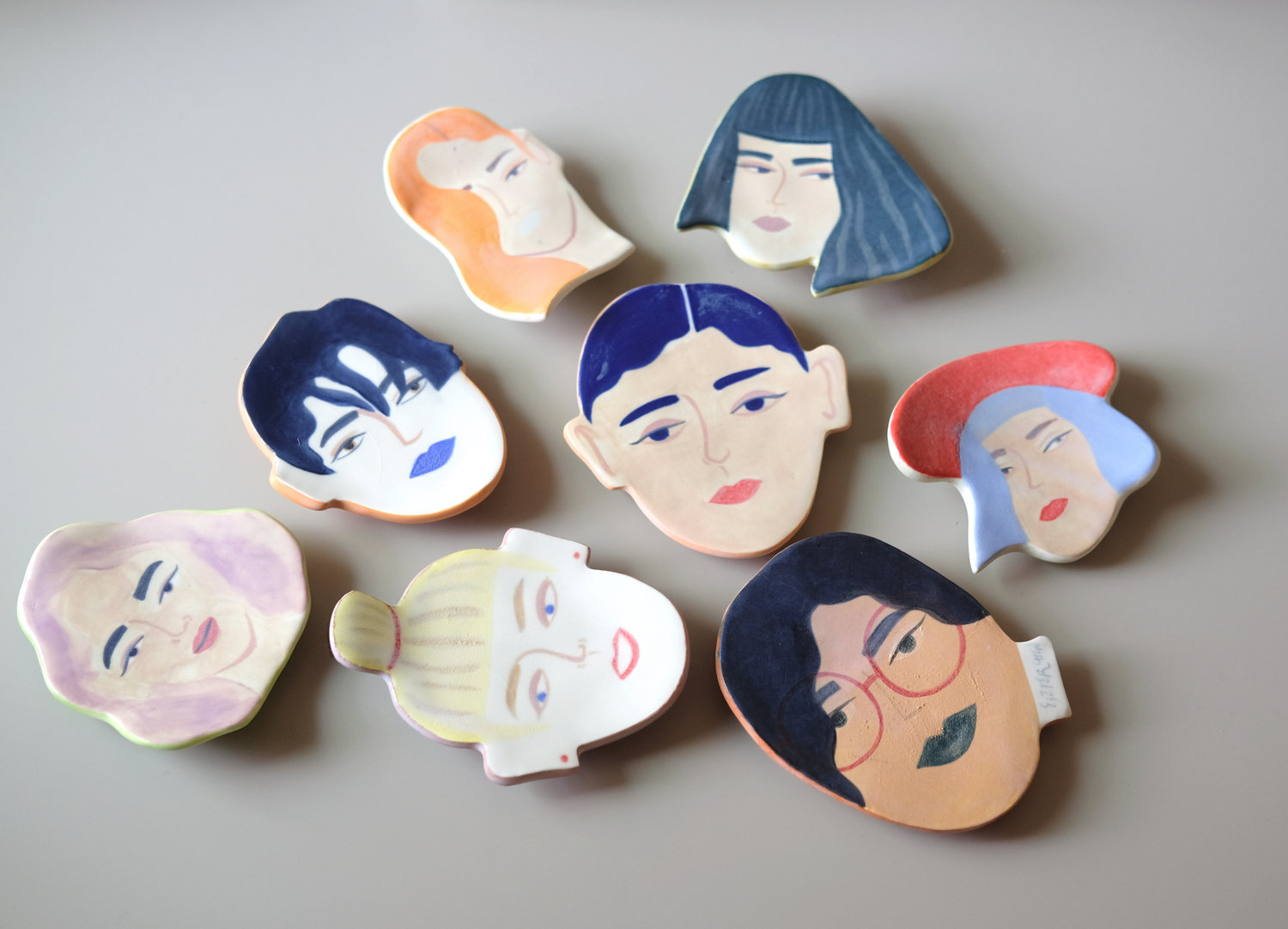 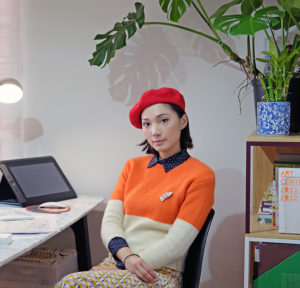 I’m Eszter, I’m an illustrator from LA and now is based in Taipei. I was born in Taipei and raised in L.A. I went to art college for illustration major and worked as a textile and print designer. I moved to Taipei 4 years ago and now I live with my husband, two Italian Greyhounds, and one baby girl is coming along. I used to work at my studio, doing commissioned work, painting, ceramics, surface pattern design, and embroidery, pretty much anything in creative that I want to try. Now I work from home during my maternity period.

Taipei is a mixture of old and young, traditional culture and new design city. The city has a lot of traditional cultures, local lifestyle, pop culture, and young creative energy. People are nice and friendly to locals and foreigners, a lot of food choices at an affordable price. It’s a safe city, small but with good enough space, not as fast-paced as Tokyo, and a super convenient place to live.

Taipei is a mixture of old and young, traditional culture and new design city.

The best part about living in Taipei is the variety and freedom, more young people get to try things they want to do and there are platforms from them to showcase. Living in Taipei or even in Taiwan is really convenient, you can get things done and be at your destination quickly by taking public transportation and they are so clean and comfortable.  The worst part I would say is the weather. It just rains often during four seasons, humid and hot during summer but nice during the winter.

I went to Art Center Pasadena in LA for illustration major. Becoming a professional illustrator would be my ultimate goal so I worked on a lot of projects to train myself during school. But after I graduated I found I would need a fulltime job to pay my bills so I worked as a textile and print designer in the fashion industry for a while. After I moved to Taipei, I started thinking about going back to painting and doing illustration and then became a freelancer. Now I’ve worked on many projects from different fields including advertising, packaging, editorial, fashion and more. I feel grateful and happy doing things that I’m able to enjoy also make money.

After I moved to Taipei, I started thinking about going back to painting and doing illustration and then became a freelancer. Now I’ve worked on many projects from different fields including advertising, packaging, editorial, fashion and more. I feel grateful and happy doing things that I’m able to enjoy also make money.

I would say half and half. Firstly both my parents are not familiar with the creative field so they were not sure about what the future would be like. However, I insisted to go to the art education and I would be responsible for my decision.  My sister was the one who always supported me during college mentally and physically, she was cooking and doing housework for me when we lived together in LA. My husband was always feeling confused about my profession since he does not work as a  creative, but he would ask me questions, listened to my plans and goals when I started up my freelance path, but now he is fully supportive and appreciates what I’m doing as a creative.

I have so many goals that I want to achieve. I separated them into personal and freelance.

As for my personal goals, I hope I will finish the series of paintings that I’ve been working on and have a great exhibition of them; making a children’s book based on the stories I want to tell; to grow my surface pattern label and make good products out it. As a freelancer’s goals for commissioned jobs, I wish I would reach more international clients and bigger brands and company to collaborate with. I’m working on finding an agent which I can fit in their artists’ group. I hope I will be lucky enough to work on some awesome projects globally and attending some of the world competition. There are many things I want to work hard on and the list keeps adding on, even though there are only a few I crossed out by the end of the year, but listing down my goals brings my motivation to move forward. Besides these practical achievements,  I hope to be an example and teach my children to think freely as a creative, be independent, and plan things well when they work on something. Even if they enter some other profession, we can respect and learn from each other.

I hope to be an example and teach my children to think freely as a creative, be independent, and plan things well when they work on something. Even if they enter some other profession, we can respect and learn from each other.

There are too many people I wish to collaborate with. Name three, Alessandro Michele, Vivetta Ponti, and Olympia Le-Tan.

I didn’t grow up with creatives around, I had looked up many cool and alternative celebrities and stars on TV and magazines, telling myself I want that hair, I want that dress and I want to be able to look like her, doing things like her… stuff like that when I was growing up, but not a specific model. I guess that was also a process of building up my aesthetic as a woman and learned how to select things I liked. Until I went to art college, I studied and got inspired by many great female creatives from history.

I feel I’m lucky to be born in this generation that society has changed the image of females in most of the modern countries compared to the past. In my country, most of the females in their working industry are feeling eminent based on their profession.  As a female creative working in my industry, I earn a lot of respect and courage. The only challenge that I will face is giving birth and family. Because becoming a mother is like another profession and job to start and learn no matter what industry you are, and people still think women have more responsibilities for family care. Especially, working as a freelancer I have to really plan my working schedule, nursing schedules and family time. Time is not as critical as you want to be like working in the office so that will affect my efficiency and production.

Don’t be shy, speak out for your passion and ideas. Be nice and gentle but strong.

Don’t be shy, speak out for your passion and ideas. Be nice and gentle but strong.