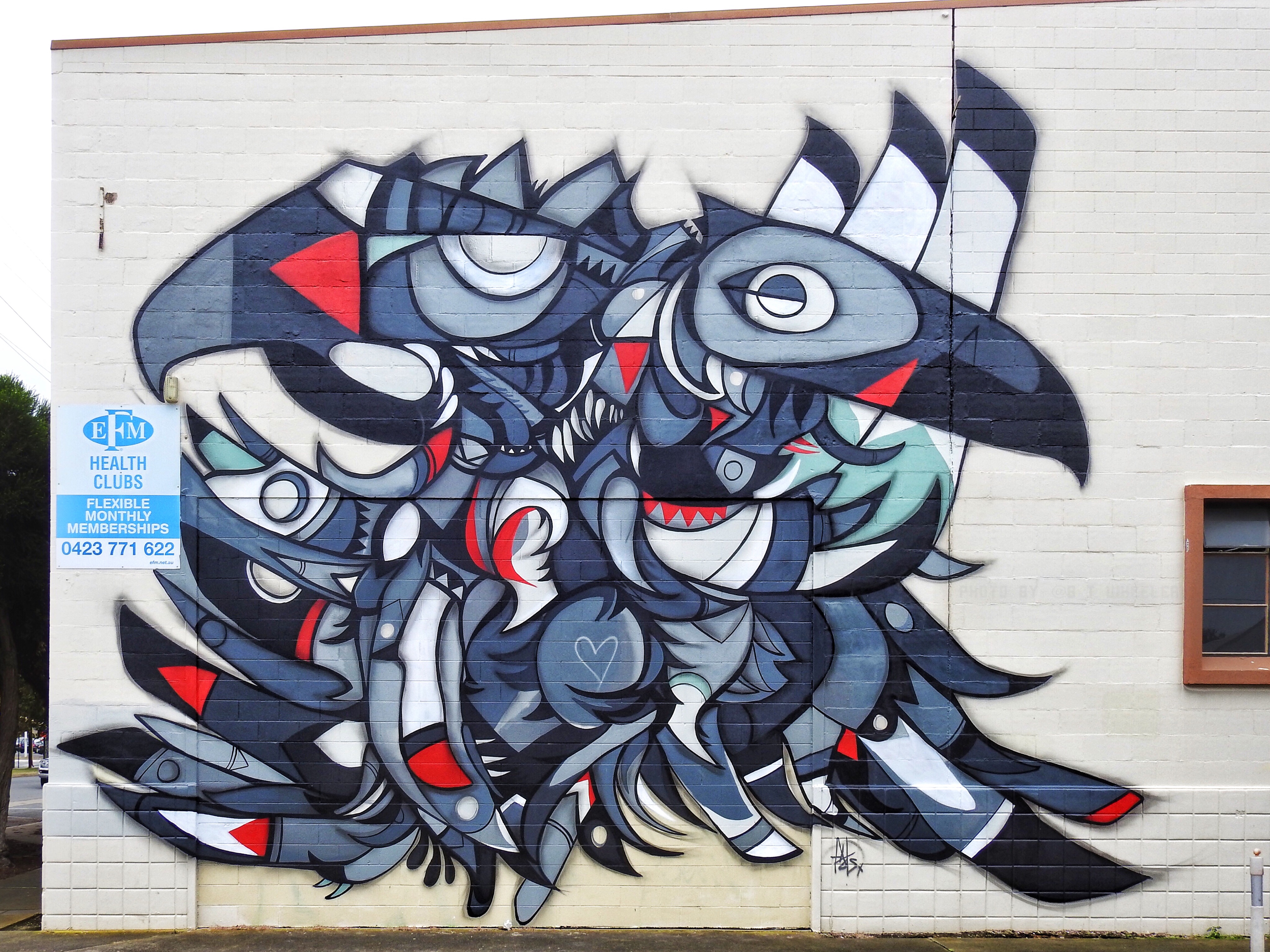 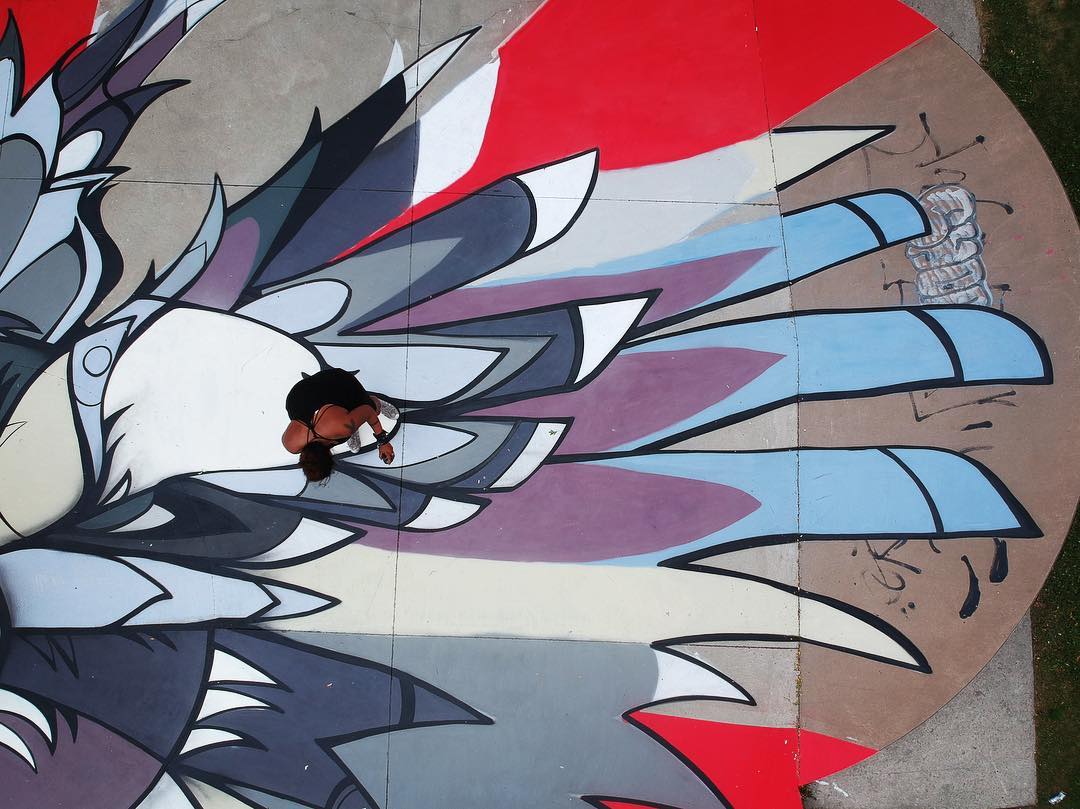 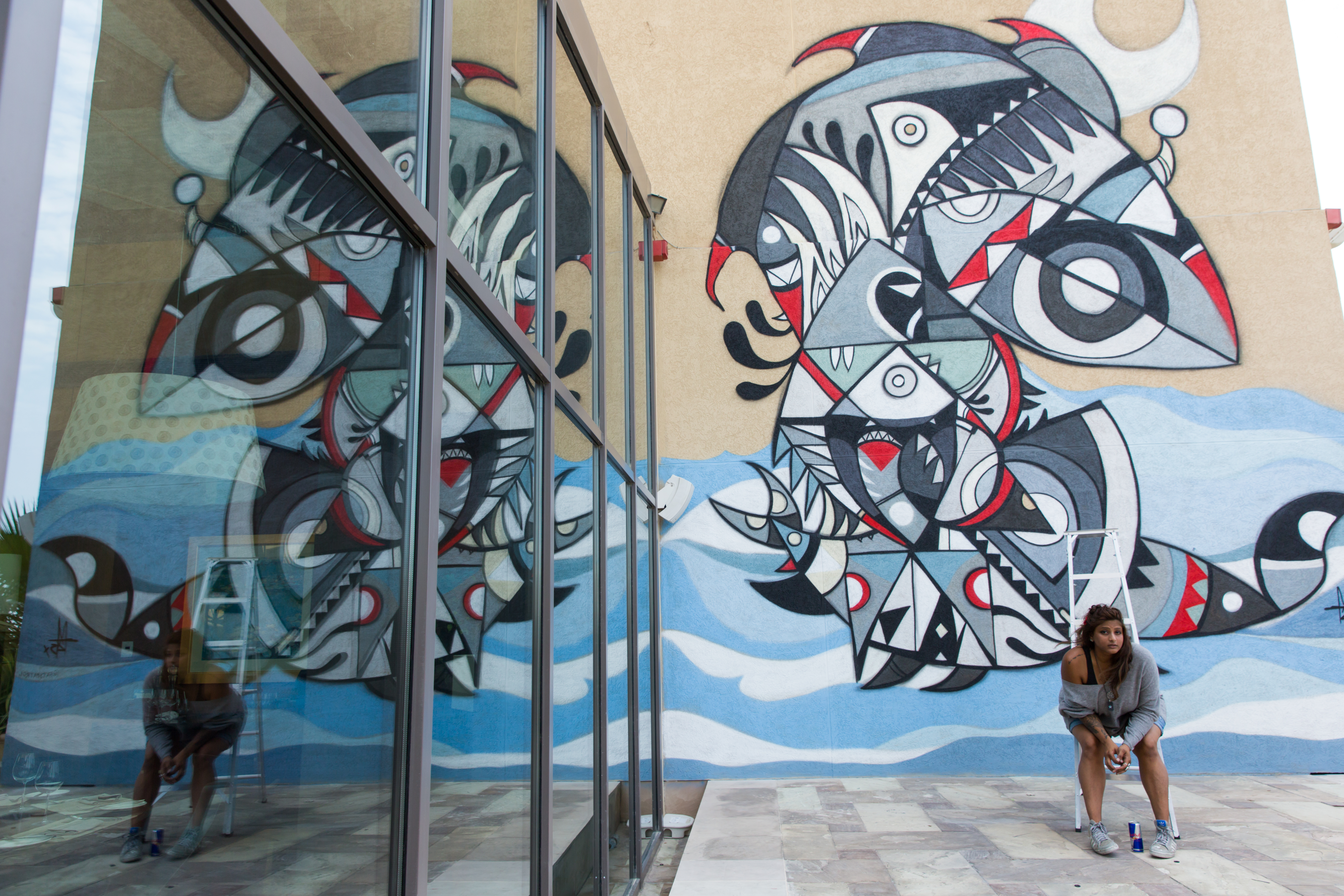 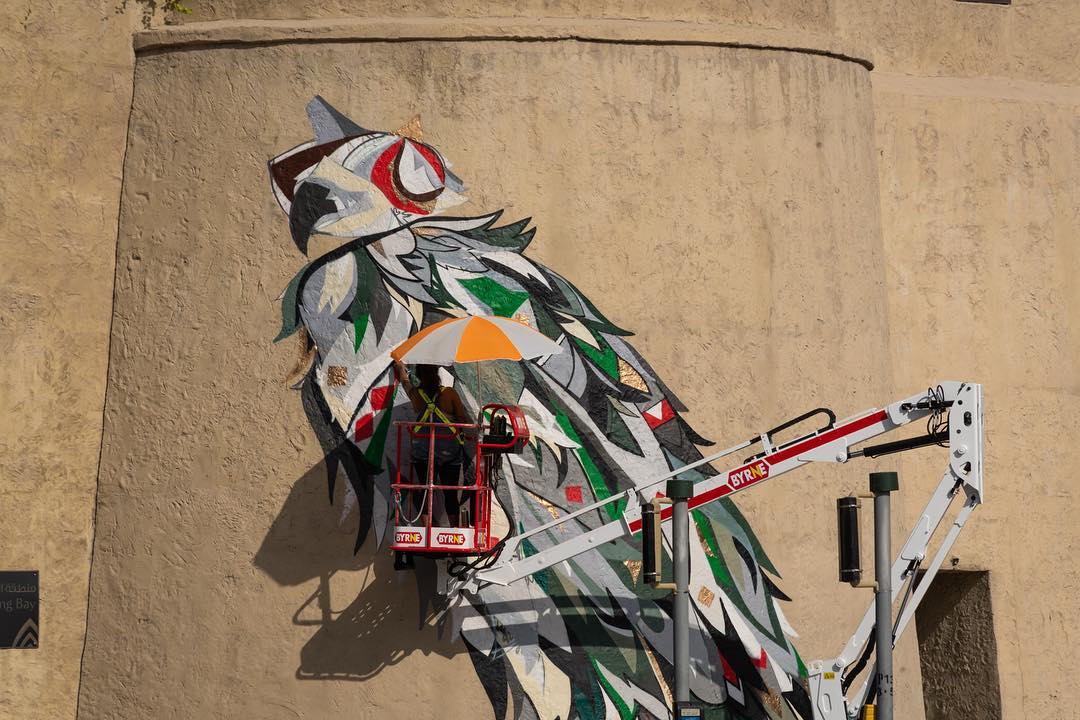 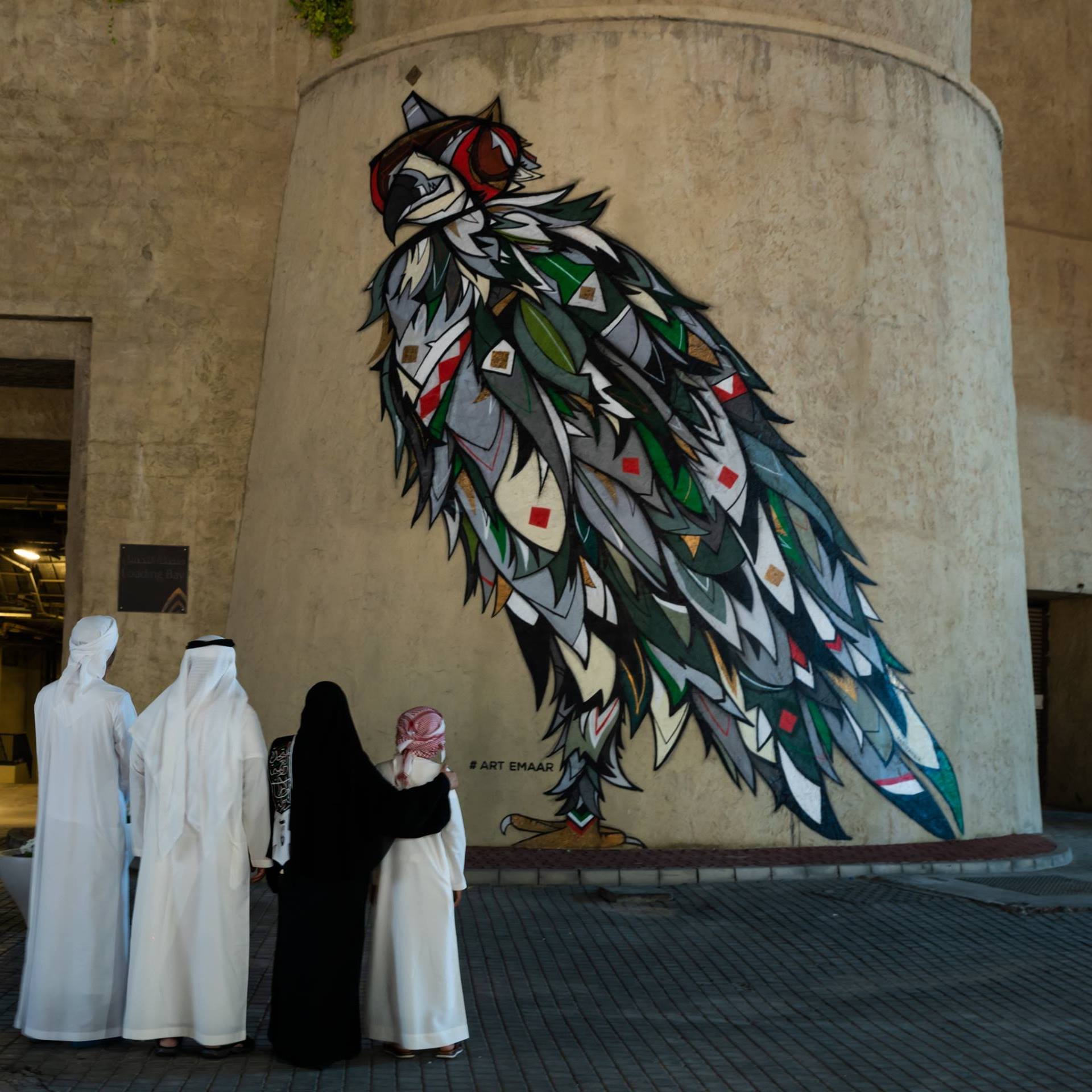 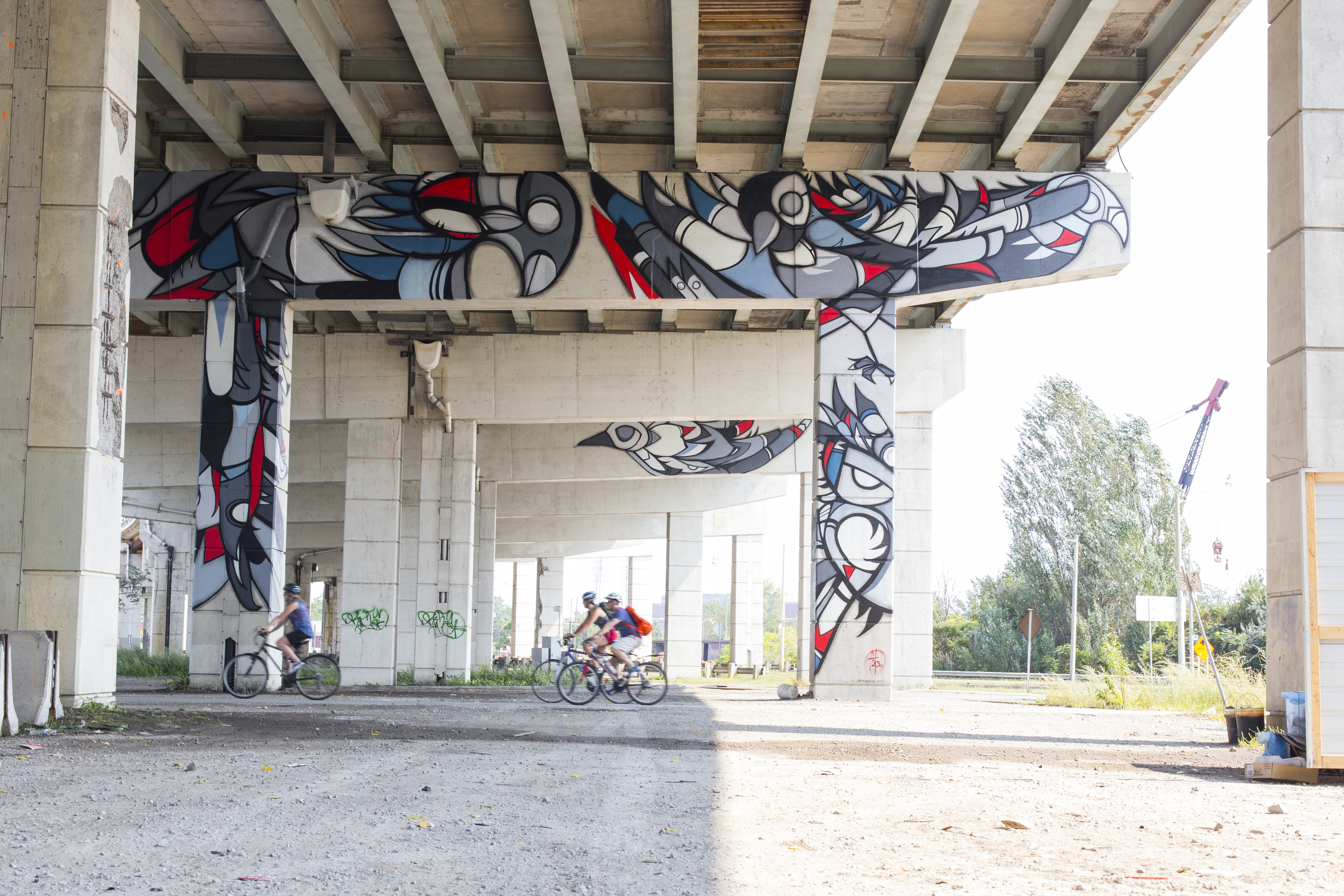 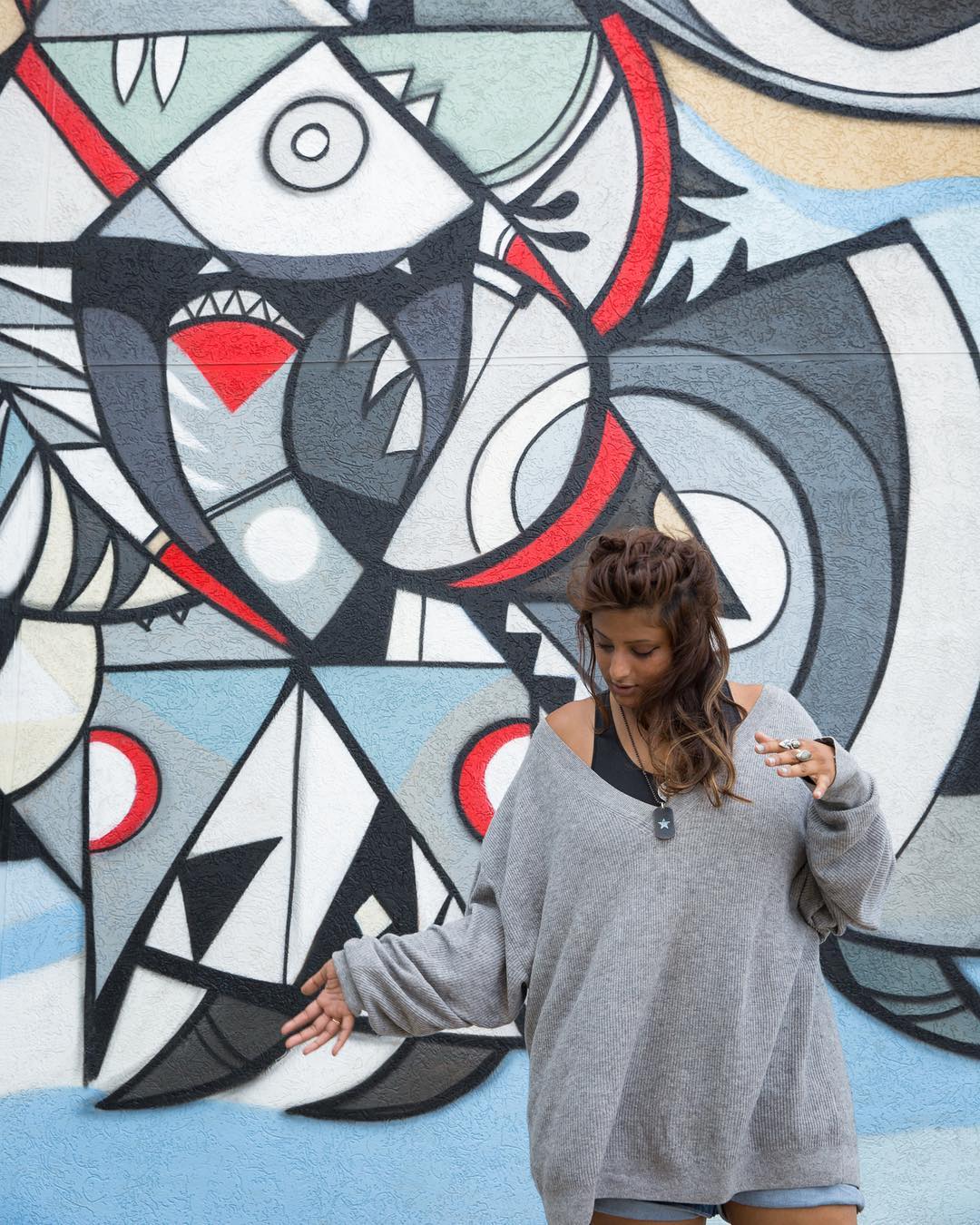 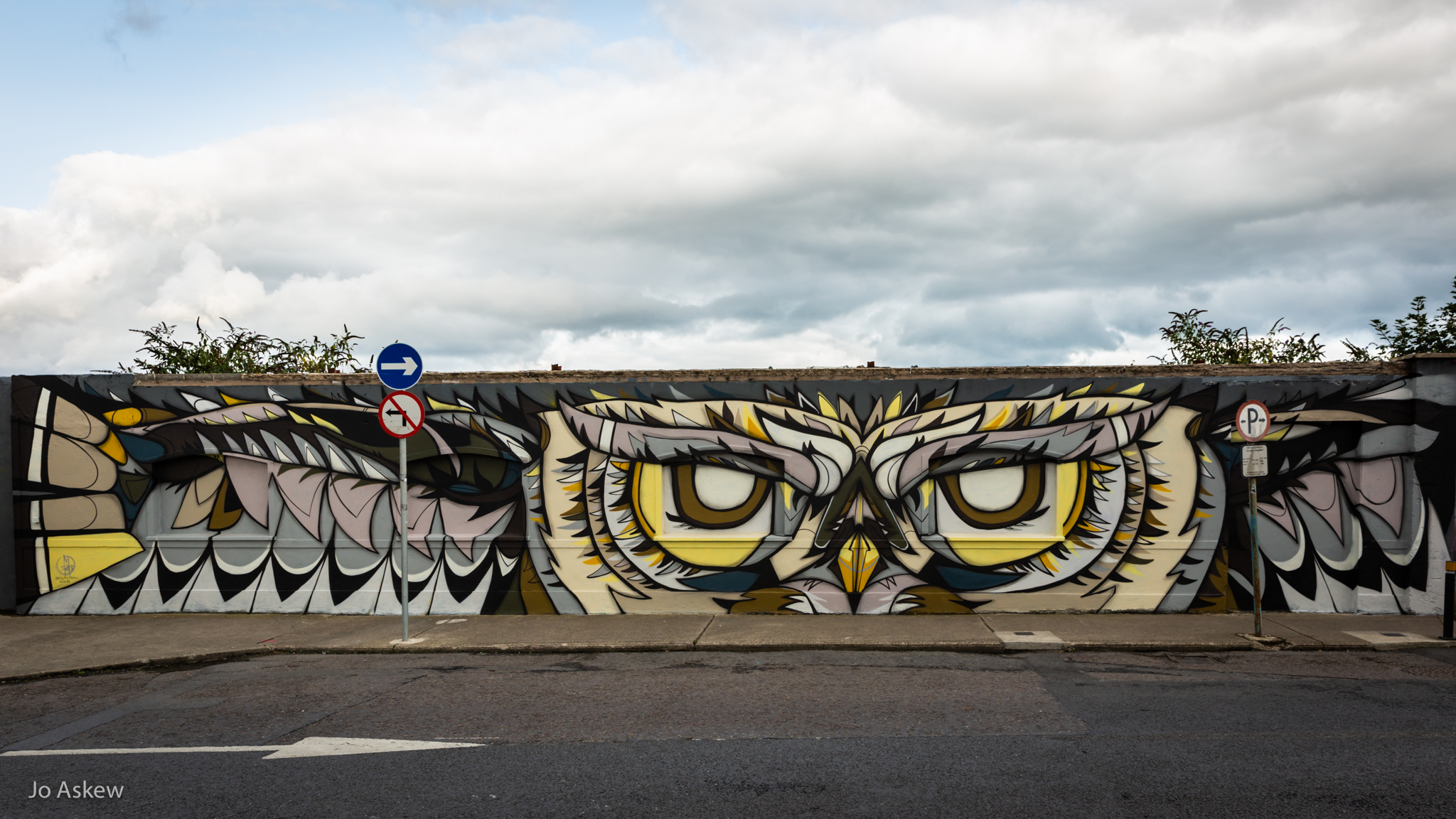 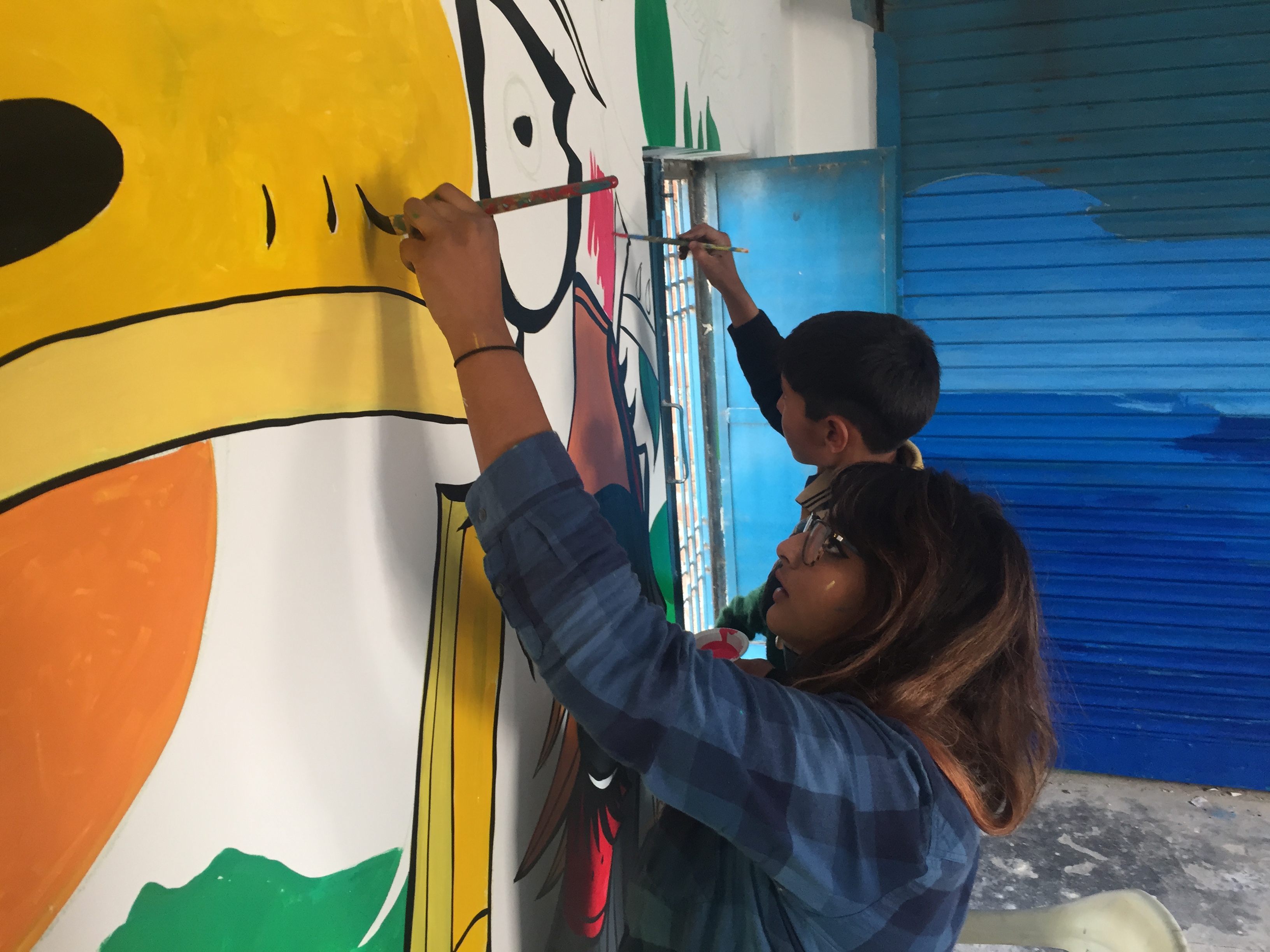 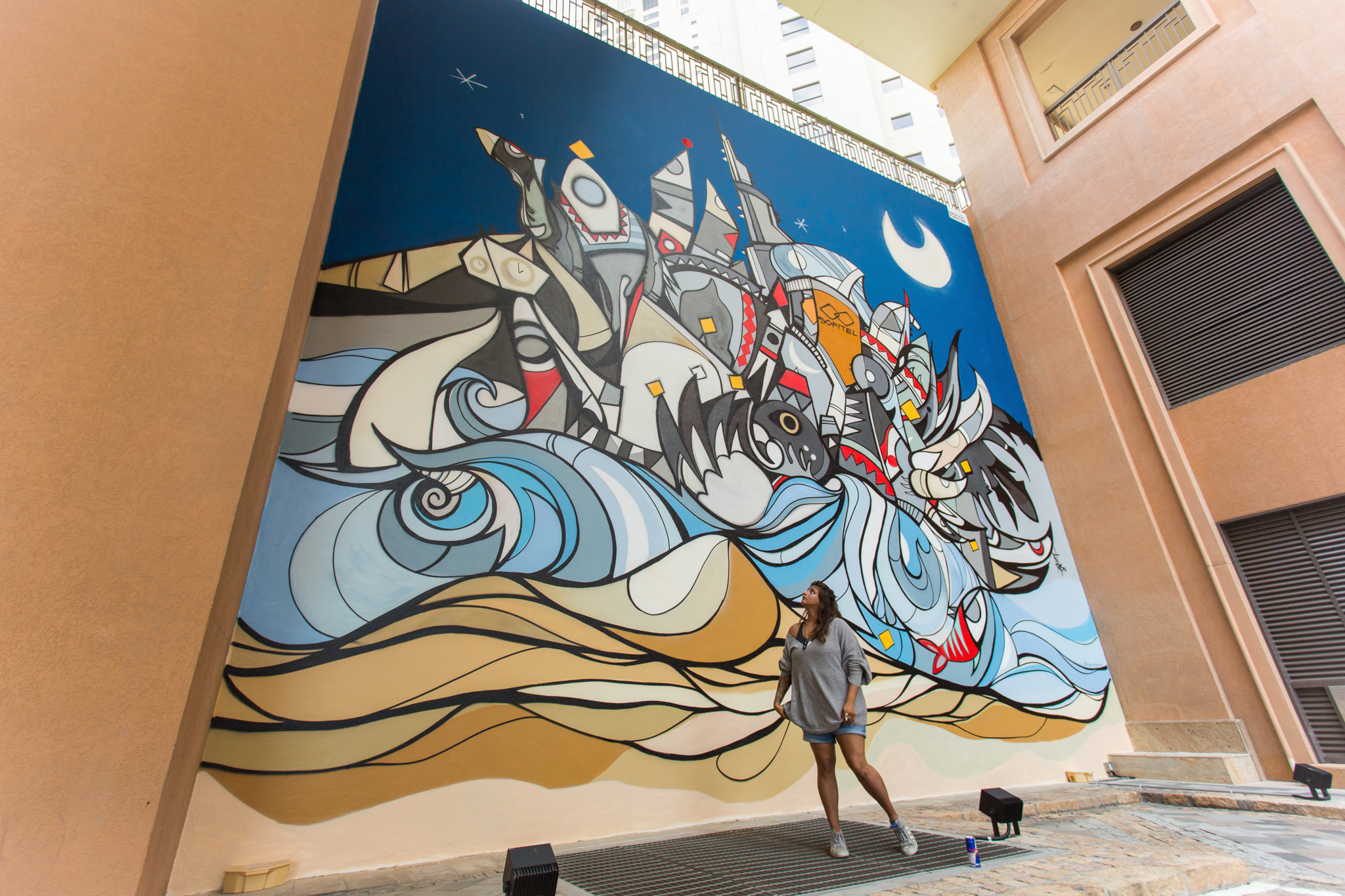 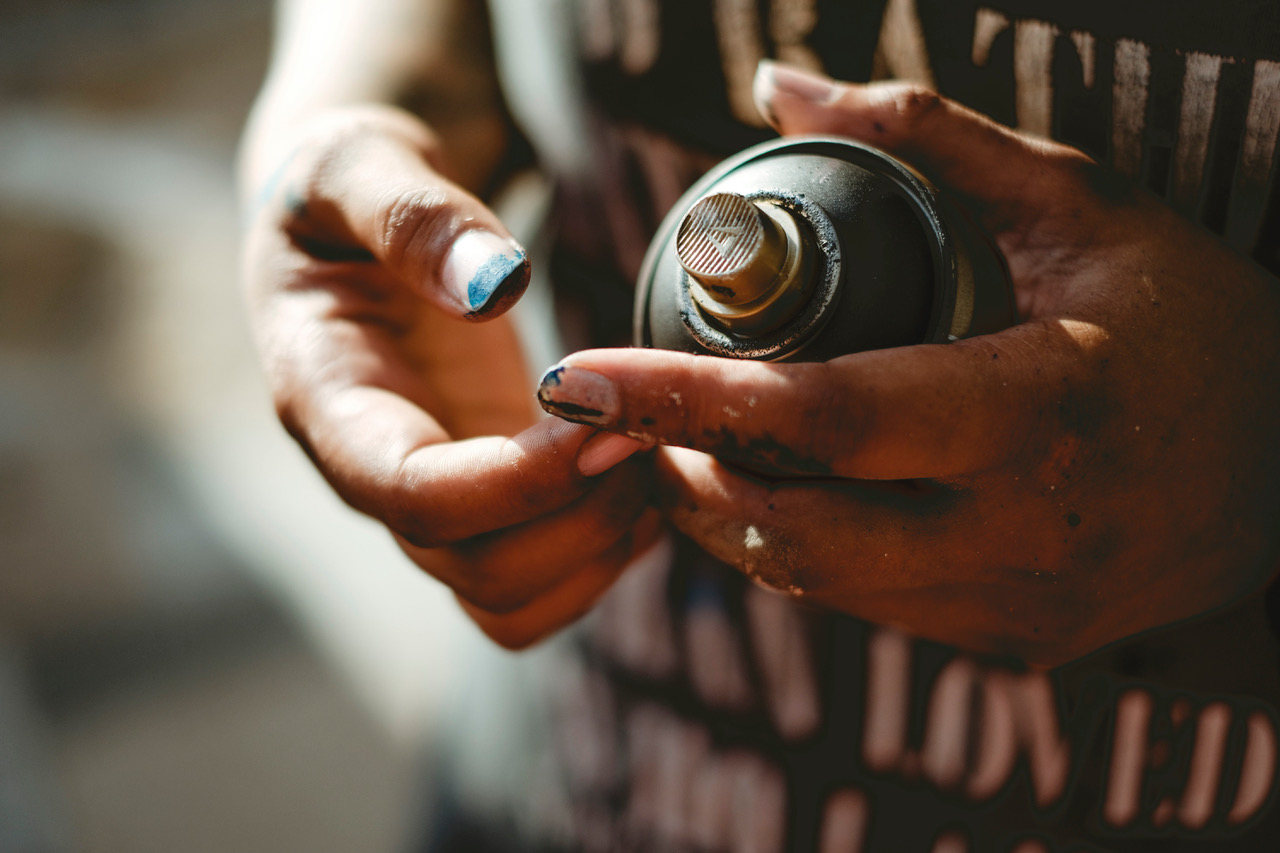 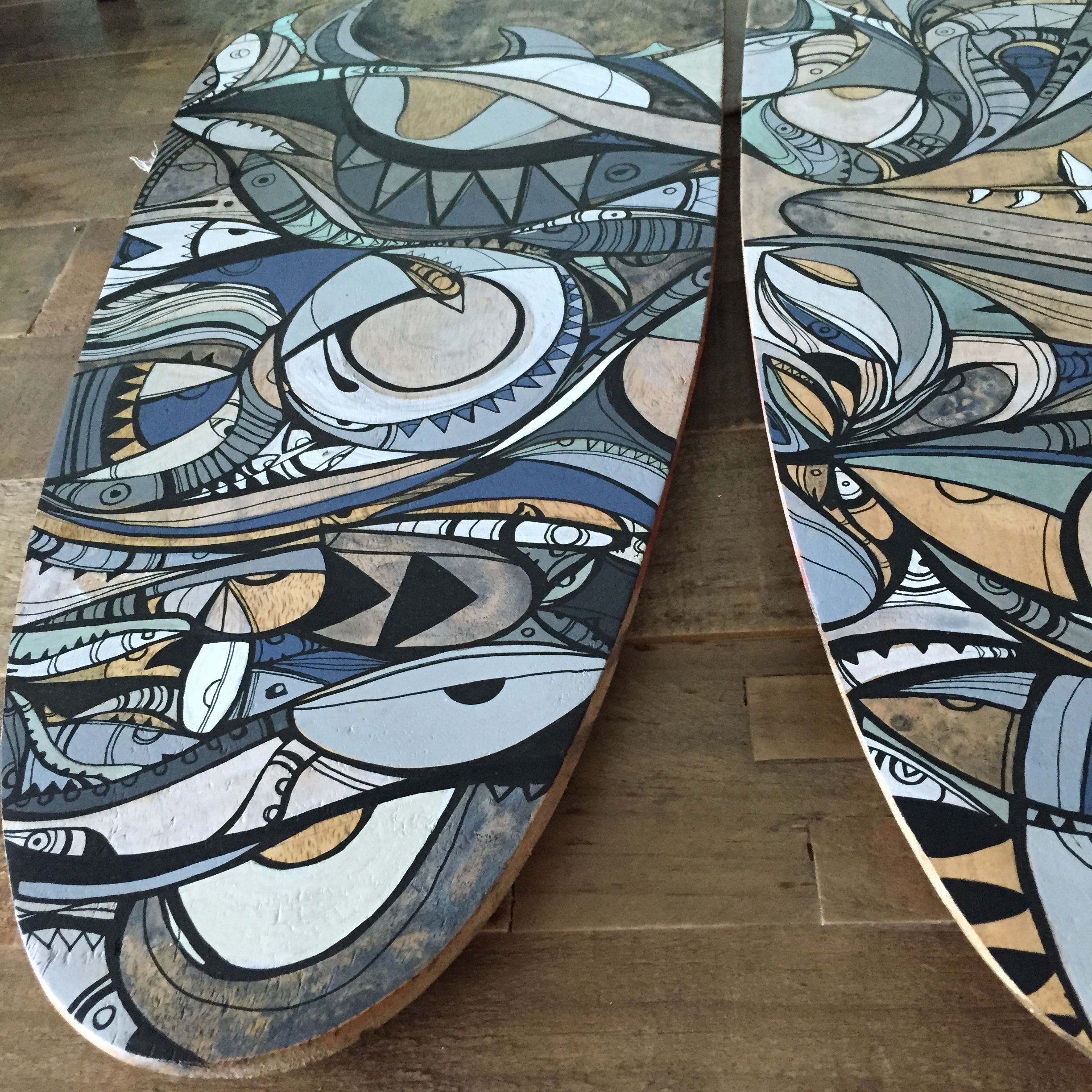 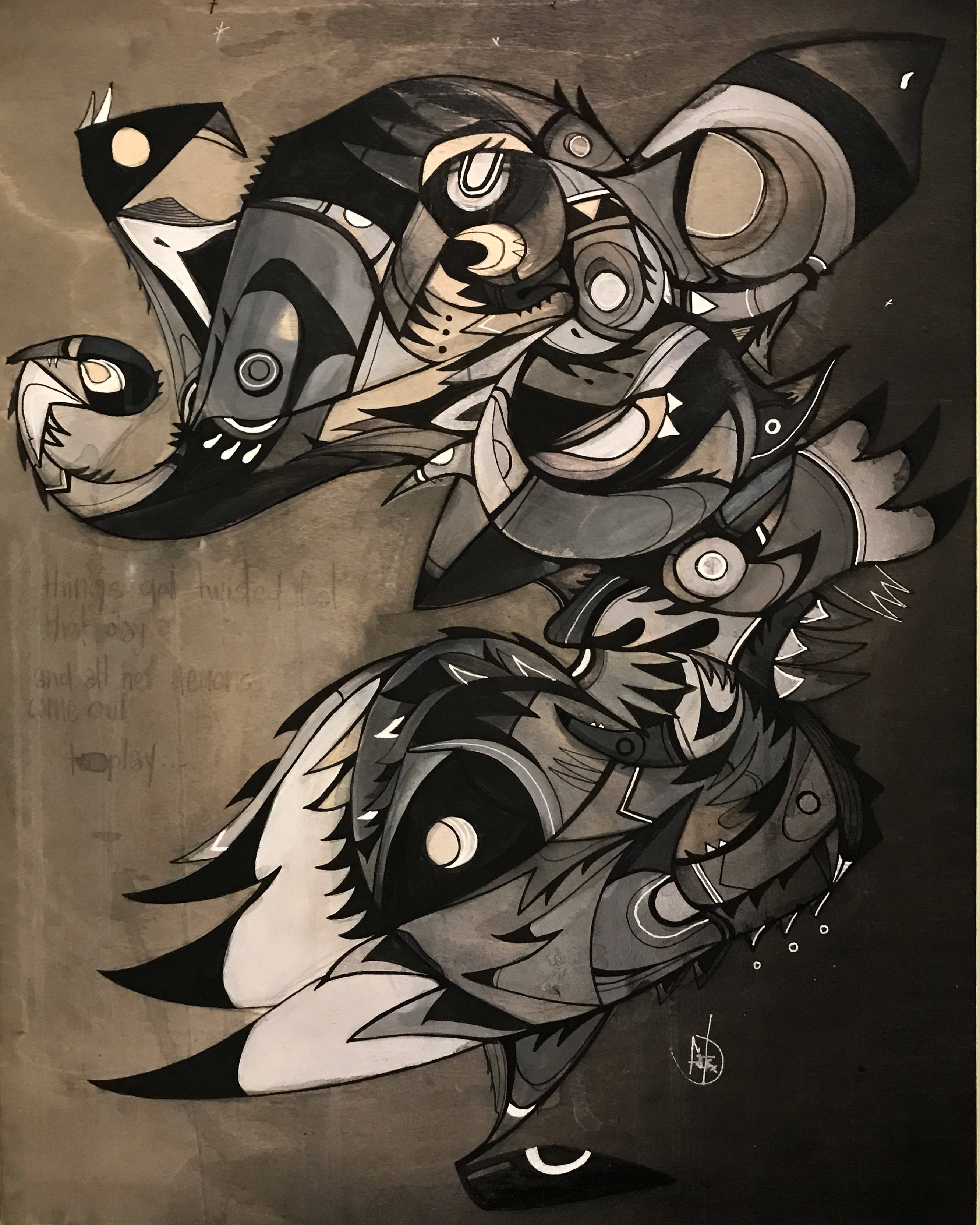 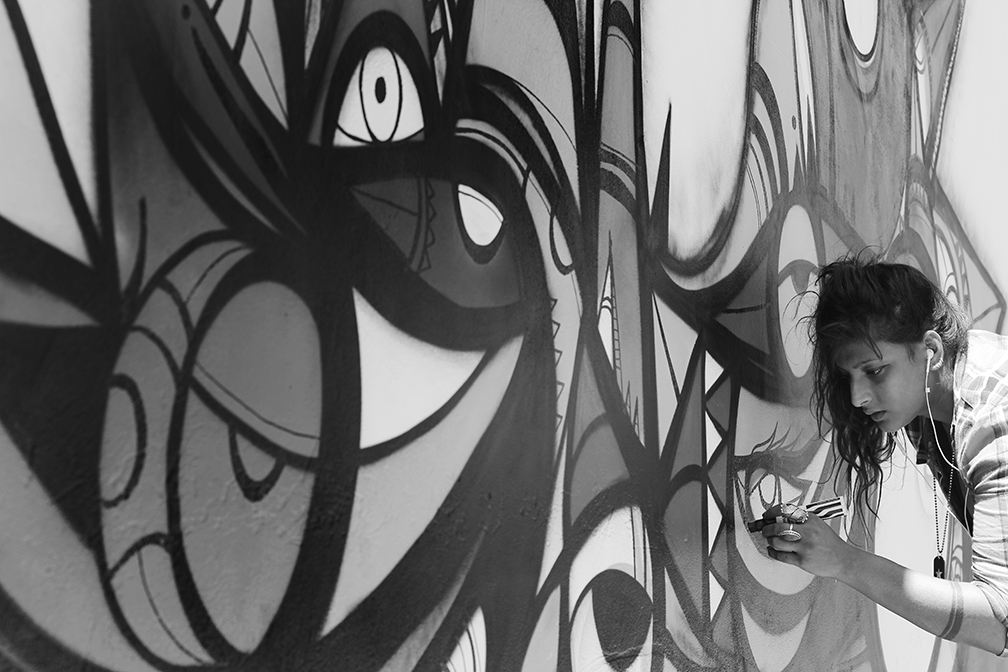 Meet street artist based in Dubai and Toronto, Fathima. 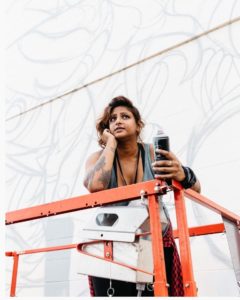 My parents are from Hyderabad, India. They moved to Dubai a few years before I was born. I’ve spent my life between Dubai and Toronto and a short stint in London as well.
I grew up as a real third culture kid in Dubai immersed in loads of cultures and not really belonging to one. Art has been a part of life forever. My brother is a cartoonist. We both started drawing young and kept it with us through our lives. Art for me has always been a constant. I’ve had to deal with a fair few tough spots in my personal life and it’s always been an important aspect of my survival, my identity, and existential ponderings, and career.
I immigrated to Canada when I was 17. Did my degree in Toronto in studio art and culture. Moved to England. Did my masters in sociology. Along the way fell in love with studying how art benefits people, communities, and society in general and gravitated towards street art and wrote my thesis on it. Then I moved back to Dubai to start my career managing an art gallery and eventually starting a little platform called The Domino in 2011 after winning a young artist award. These days I go back and forth between Dubai and Toronto and I’m trying to focus mainly on my own artwork. I’ve been fortunate to travel to and paint in a few countries over the last few years. To have been supported and encouraged by organizations like the British Council and Red Bull UAE. I try to do outreach work when I can with a sense of social responsibility. I’ve done little art projects with youth in challenging situations in India and Toronto and Jordan.
I care about art and I think in a time when things are so chaotic and impersonal and often dehumanized, it’s an important tool and force in the world.

What’s been achieved in Dubai in such a short time is remarkable and inspiring and perhaps that’s where I get some of my drive and ambition.

Dubai:
I was born and raised here. I have a challenging relationship with it for a number of reasons. For one, even with a birth certificate, I’m not eligible for citizenship so I have strong conflicts about where I really belong and come from. To not be a ‘local’ after 27 years living there is tough. That said it was a wonderful place to grow up. To experience community and a really unique type of multiculturalism. The culture is rich and nature is beautiful. It was safe. But the memory of how it was when I was a kid also makes it difficult to live there in the present. It’s changed so dramatically. And what’s been achieved in Dubai in such a short time is remarkable and inspiring and perhaps that’s where I get some of my drive and ambition. It is also a society motivated by commercial gain, achievement and image and sometimes it’s difficult to find and express a value system in that. But there are pockets of authenticity that are quite wonderful in Dubai, should you choose to seek them out. Dubai feels safe and gives you access to travel and the means to experience the world as well as to, as a 27-year-old, turn an idea into reality as I did with The Domino. I’ve made some of my life long friends there and been able to be a part of an art scene that was starting from scratch.
Toronto:
I came to Toronto on my own when I was 17. The only person I knew was my brother who’d started university 3 years before me. I got a whole new taste of what freedom really means in the world. In terms of expression and censorship and social restriction (compared to Dubai) and being who you want to be and not feeling obliged to fit in or fit into a mould. That was something I’d found hard in Dubai. I have a real love for Toronto because it gave me that freedom to explore and decide what it is I care about and who I want to be. It taught me to value more than money and image and to care about people, community, the environment. etc. and to see what an inclusive society looks like. I was also confronted by some of the harsher realities of the world that you don’t necessarily see in Dubai. Homelessness, crime,  politics, taxes (!), gentrification, treatment of Indigenous people, etc. It’s definitely a more challenging world. It’s harder to have the career of your dreams, there’s taxes, there’s more paperwork. It’s a different government system from what I was familiar with and all of that hasn’t always been the easiest to adapt to.
But it gave me a place to belong and call home regardless of where my parents came from or what my birth certificate says. And I appreciate that every day. I think the two best things I found in Toronto were streetlife and nature.

I actually painted my first mural with an organization called Mural Routes in Toronto when I was 18. I never had the confidence or self-belief to think I could be a full-time artist so I kind of did everything but that in the arts over the next 15 odd years. It was through The Domino that I built up some confidence as an artist in Dubai and finally after a really rough patch in my life 4 and a half years ago when I really got thrown into a situation where I needed to make art to cope and survive emotionally, that I decided to pursue a career as an artist. Up until that point I had worked in community arts, outreach, galleries, curation, commercial art, etc.

You know it’s not something I ever really stopped to check. Once I set my mind to something I’m pretty adamant about doing it regardless of what anybody thinks.
I think for a conventional Indian woman it was a bit of challenge for my mum because being a creative, in my case, came with a lot of acting out! I was a really difficult teenager, a lot of outbursts, and then later the tattoos and expressive language and brutal honesty in public, traveling the world alone, notions of free-spiritedness, rebelling against her culture and religion, etc. and all the parts of my personality and lifestyle that contribute to my being a creative, I think, were the parts that she found difficult. It’s not that she wasn’t supportive of my choices, it’s that she always wanted to make sure my head wasn’t too far in the clouds and I never got complacent.  I think my brother being a creative too helped!

Once I set my mind to something I’m pretty adamant about doing it regardless of what anybody thinks.

I’ve always wanted a little store! My mum used to take me to this store in Hyderabad that just had beautiful things in it, mostly hand made. Like block printed fabrics on chairs and little clay objects and just stuff. Loads of art objects. And I’ve wanted to open my own store ever since. So who knows!
In general, I’d like to start working more site-specifically I think in less conventional spaces. Start transitioning into installation that is drawing based. That sort of thing.

One of my top-top favorite artists is Roa. I think I got interested in wildlife and positioning it in urban spaces and street art partly because of his work. So that’s one artist I’d love to work with.

I’d say my art teachers actually. They were always women. And I think seeing women working in the arts, not being super conventional definitely played a part in me feeling like art was something accessible to me as a life choice and a career.

I think it’s the fact that people ask you that question that makes you have to question your career, if that makes sense.
Men probably don’t have to question if they are being paid the same as women, for instance, or whether their gender is a challenge in their industry. But women do have to ask themselves that question because someone is asking them that question, and that’s where we are in the world. When it becomes a non-issue it won’t matter anymore. So I think if anything it draws my attention to the fact that it hasn’t always been fair, it still isn’t always fair and I should be questioning where we are and what my role is in progress.
That said, yes there are some challenging aspects:
I think because you’re female, people also expect your work to be feminine. My work is not about being a woman. It’s not about being Indian or Canadian. It’s about being a person who inspite of their circumstances is looking for truth and hope in a way that resonates universally across genders, races, etc, etc.
I think on some level, not just because of my industry, I have in the past resented being a woman because of the social/physical vulnerability it can involve. It’s almost impossible to not question if you’re safe. Especially when you’re working on a site alone in a foreign neighbourhood and in that become aware of your vulnerability partly because you are a woman.

But I think the most confronting experience I recently had was in a meeting where I had been invited in to potentially be painting a large outdoor area for a project. I was told, by one of the men in the meeting, that they had found me on Instagram and then proceeded to joke about how there were many photos of my ‘rear’/ ‘behind’ on Instagram.  I did at that moment feel like that was very much about me being female. I don’t think (I could be wrong) a man would receive the same remarks about photographs of them just up on ladders painting walls. So that made me uncomfortable. And of course there’s always comments about how they didn’t expect it to be a woman who was up there painting that wall. Other times people only call you for projects because you’re a woman and they’re trying to tick a political correctness box. That bothers me as well.

So as much as I try to separate gender from my work, I’ve also learnt that I’m part of a bigger picture and process and I need to own that as well.

I think because you’re female, people also expect your work to be feminine. My work is not about being a woman. It’s not about being Indian or Canadian. It’s about being a person who inspite of their circumstances is looking for truth and hope in a way that resonates universally across genders, races, etc, etc.

Don’t wait for validation.
This whole idea of being good enough or legit enough or can I really call myself an ‘artist’ enough is a waste of time. You’ll learn as you do and you’ll grow as you do. You determine your worth, so don’t undersell yourself before you’ve even started.