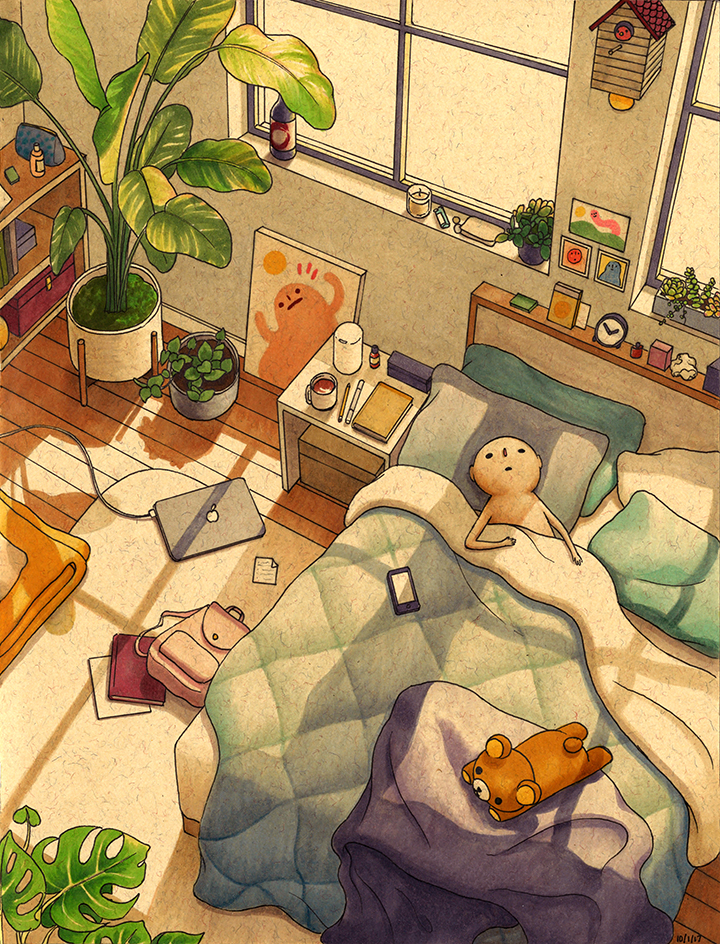 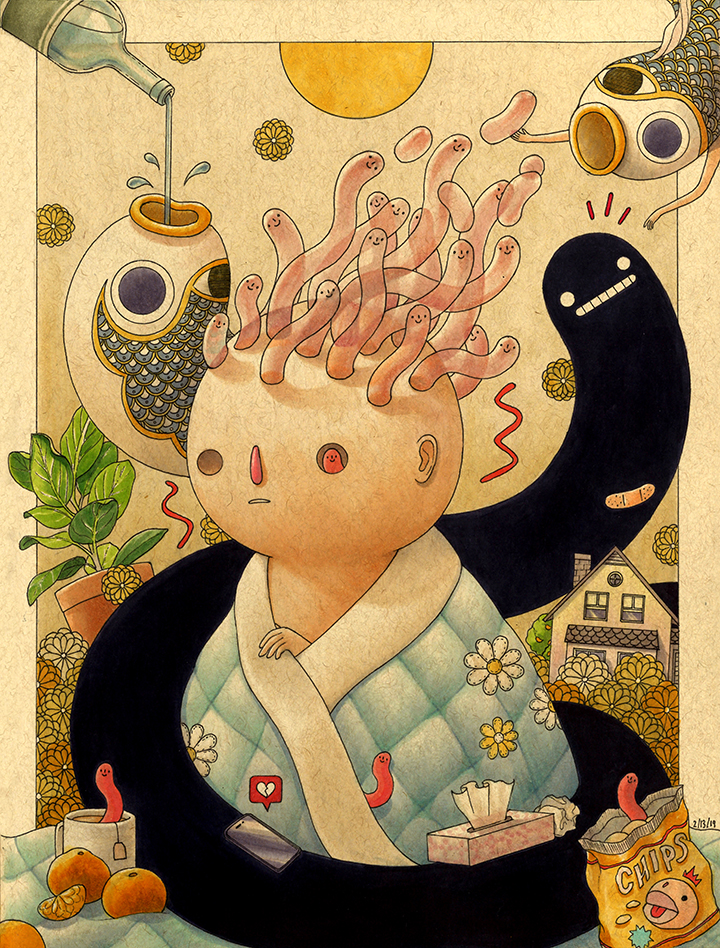 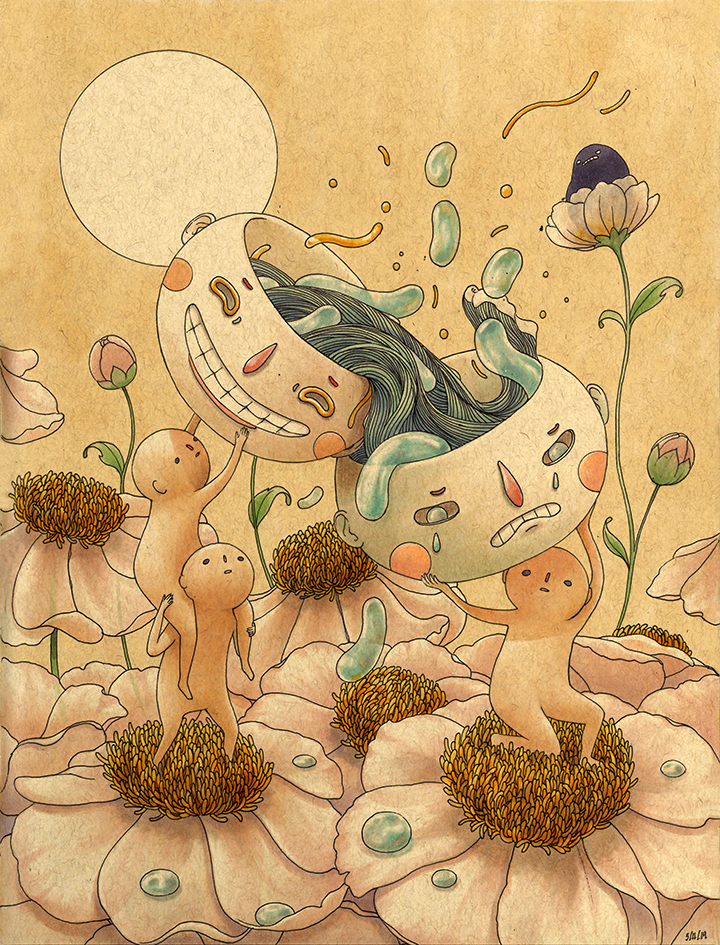 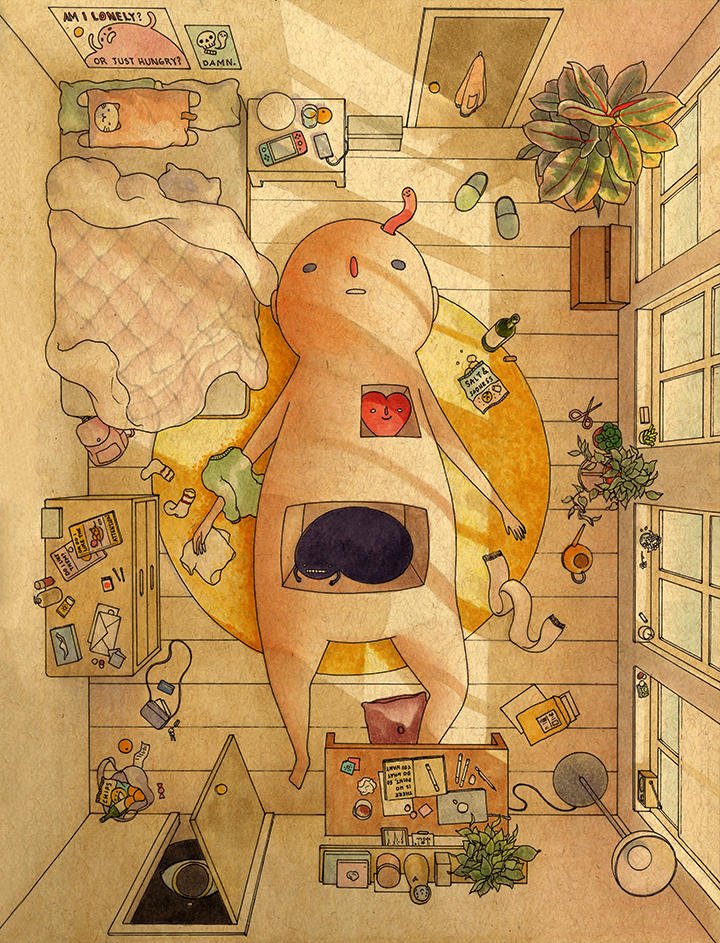 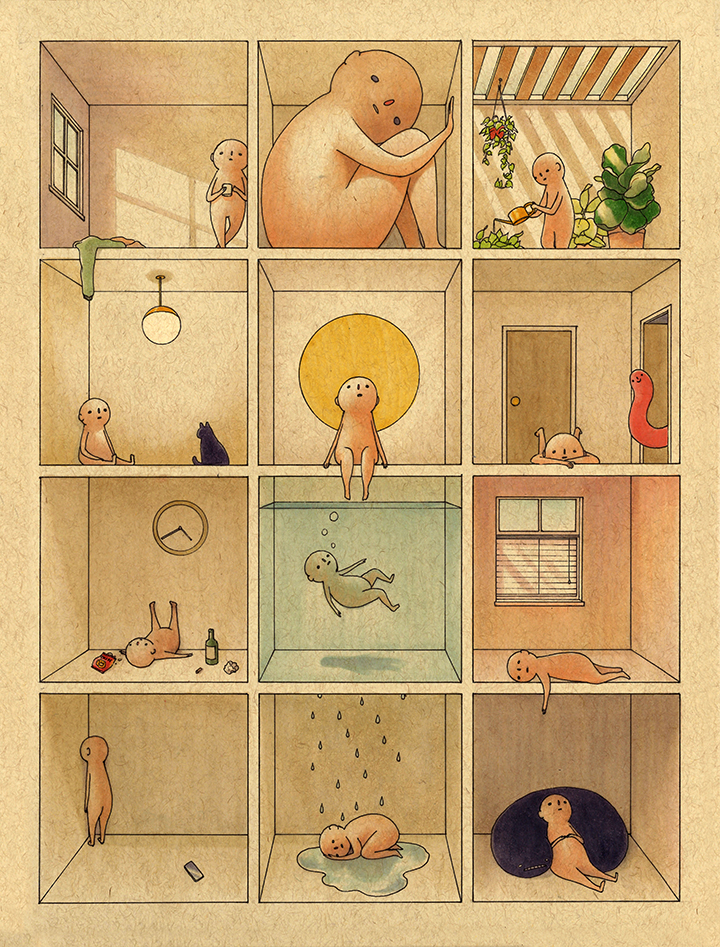 I’m really bad at this. Ok, let’s see…this comes as a surprise to most people but I actually work full time as an industrial designer and just do illustration mostly for fun. I work for a consultancy based out of San Francisco and focus mainly on designing for the food industry, which basically means I travel and eat a lot for a living. It’s great. I can’t really complain, but it does make it challenging to keep my illustration work up on the side sometimes. I’ve always drawn for fun so I’m hesitant to freelance or do illustration as a job because then it might become a chore. It’s always been the best outlet for me and I would hate to lose it. As far as background goes, my parents moved to the US from Taiwan and they had my older sister and me in Texas. I was born in Austin and grew up in Sugar Land (basically Houston) in a strangely large Asian community, so I didn’t have an Asian kid identity crisis until probably college. I graduated from the Rhode Island School of Design as an industrial designer and dabbled in the toy industry for a hot second before switching to food work. All the while I’ve been trying to fill a sketchbook a year with full-page illustrations. I haven’t quite managed to do each one in a year because life is hectic, but for 2019 I’ve been doing a drawing a week pretty consistently. Each drawing takes about 10-20 hours on average so it’s a real commitment! Outside of creative work I really enjoy cooking and taking 4-hour naps as often as possible.

I mean, where do I even start with San Francisco? It’s an absolutely gorgeous city with incredible weather and a great food scene. I can get almost anywhere without a car and for the most part, everyone is relatively laid back and happy. I’ve made some incredible friends and I feel very comfortable here. On the other hand, it has one of the worst issues of homelessness in the country while also having the highest density of billionaires in the world. The thought does tend to leave a bad taste in your mouth, especially when you’re paying some of the highest rent in the US which cripples you financially while also feeding into gentrification. So…I guess you could say living here is controversial.

Best: I know this is lame but honestly the weather keeps me pretty happy here. It’s almost always in the 60’s and sunny and I work best when I’m comfortable.

Worst: My rent is insane. Thinking about how much I pay in rent gives me heartburn.

I’ve been drawing almost my entire life and selling random things here and there, but I got my first real job as a toy design intern at a consultancy in California. Eventually, when I graduated I moved to Ohio for a job at a toy company, hated Ohio, and went back to the design consultancy in California but this time I joined their Design for Food team. All the while I’ve been making illustrations in sketchbooks outside of my design career and that has been blowing up on its own. A lot of opportunities have come in for me through my Instagram or Tumblr and I’m starting to see my illustration work grow beyond just a super intense hobby. I was the resident artist for Dirtybird records in 2018 which was incredibly fun, and I also have a collaboration with Denik where they use some of my art on the covers of sketchbooks and notebooks. You can find one of my covers in Black Art Materials now, and a bit of the profits go toward building schools. It’s really cool! They both found me through my social media presence so I think I owe my start to these online platforms illustration wise.

All the while I’ve been making illustrations in sketchbooks outside of my design career and that has been blowing up on its own. A lot of opportunities have come in for me through my Instagram or Tumblr and I’m starting to see my illustration work grow beyond just a super intense hobby.

Hmmm for the most part yes. My mom always encouraged me in my creative endeavors when I was growing up and I was allowed to take art classes and buy supplies, but my parents definitely were not stoked when I decided I wanted to go to art school instead of studying to become a doctor or accountant or something. They still let me go though despite their doubts so I guess that’s what matters. I definitely had a lot of anxiety during my school years to prove myself. I felt like I had to be the best and the most successful in order to show that letting me go into the creative field wasn’t a huge mistake. I can’t remember what anyone else thought about it though because I don’t think I cared.

I’m definitely going to keep doing what I’m doing as long as it continues to bring me satisfaction. I truly draw for no other reason than the fact that I love it and I need to do it to stay sane, so even if nothing ever came out of it I would still be doing it. I do see my illustration work overtaking my design work at some point in the future and I think I could be ok with that though. The main issue is I really don’t like being told what to draw so I definitely couldn’t freelance regularly. Ideally, the hope is I can maybe get more licensing opportunities or work with really cool people. My full-time design job lets me be picky with what work I want to take on in my illustration life so I feel very fortunate to only do the things I want to do.

I’m definitely going to keep doing what I’m doing as long as it continues to bring me satisfaction. I truly draw for no other reason than the fact that I love it and I need to do it to stay sane, so even if nothing ever came out of it I would still be doing it.

I honestly don’t have a specific person in mind, but I’ve always thought it was really cool that David Chang has James Jean pieces and murals in all of his restaurants. That kind of covers both of my interests (food and art), and if I could find something awesome like that I would love it. Asian creatives, makers, chefs, etc. are really having a moment in pop culture and media and I really think we should be supporting one another, so I would love to collaborate with and support other Asians in that way.

My team at work is predominantly women which is not the norm for the rest of the company, so I feel very fortunate to have strong female coworkers and an all-women leadership team to guide me. Most of my friends have historically been men (industrial design is a male-heavy field) but recently I’ve been making an effort to make bonds with more women. The lady friends I have made so far are some of the coolest, most inspirational people I am fortunate enough to know, and I need more of that kind of support in my day to day. Also, I can’t forget the OG woman in my life, my mom. She’s the realest; super talented and independent and I’m realizing just how much I’ve learned from her as I try to navigate adulthood and what that means for me.

Not really. I grew up in a very Asian community in the suburbs of Texas so art and creativity weren’t really a focus for life. I didn’t know any female or male artists really, and I definitely didn’t know art could be a career for most of my childhood. I really just made things because it felt good and I think that’s still true for me now. My sister did art in high school and my mom would make great drawings every now and then but it was never anything super serious.

As far as illustration goes, I honestly draw by myself in the middle of the night on my bed. It’s a very solitary activity. I post the drawings online once a week and that’s about it. I haven’t noticed an issue with being female but I’m also not super engaged with the industry since I don’t really work too often in it. The character that shows up in my drawings a lot is also genderless so it’s not a topic that comes up in my work either.

The design industry is largely still white and male, but I am really good at my job and I don’t let anyone mess with me. At most, it’s a nuisance when I can sense someone doubting my abilities when I enter a machine shop or something, but once I start working I usually prove myself plenty capable and people trust me. As I mentioned earlier, I’m also a part of a team of amazing women at work so I’ve been very fortunate that the challenges I do face are not gender-based as far as I can tell.

Talent only gets you so far, it takes a lot of time and hard work to really stand out.

Find what you really like to do and run with it. Work 100 times harder than everyone else, don’t worry about who’s better or worse than you, just focus on what makes you feel good and what gets you excited. Don’t worry about always making something good either. You don’t have to share everything you make and your self worth is definitely not based off a bad drawing. Everything you make, good or bad, is practice and makes you just a little bit better than you were before. I went through 4 whole sketchbooks front to back before I even figured out my illustration style, and then it took another sketchbook to solidify that style. That’s over 300 illustrations there alone, not including all the work I did outside of my sketchbooks as well. Talent only gets you so far, it takes a lot of time and hard work to really stand out.