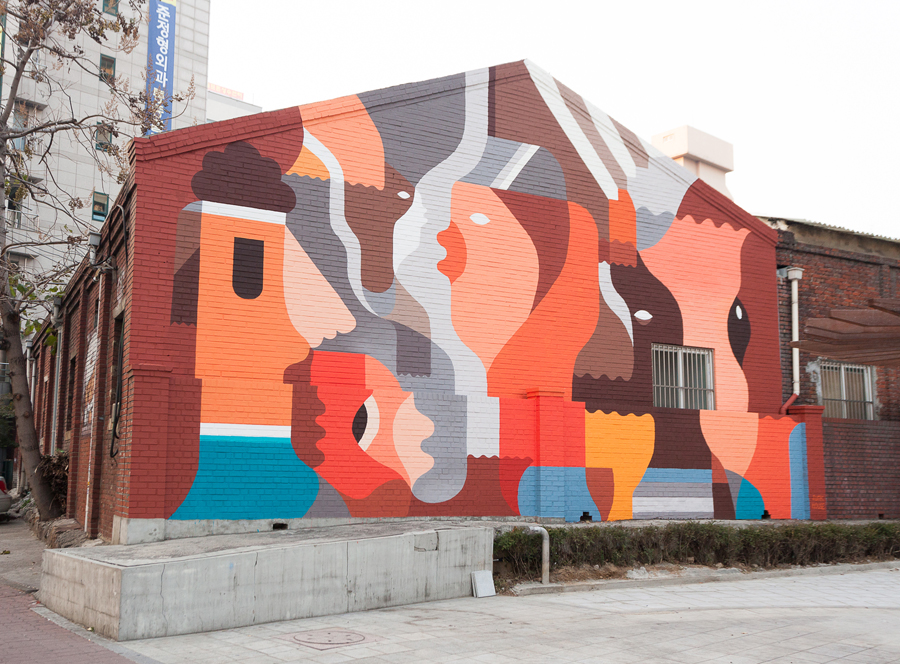 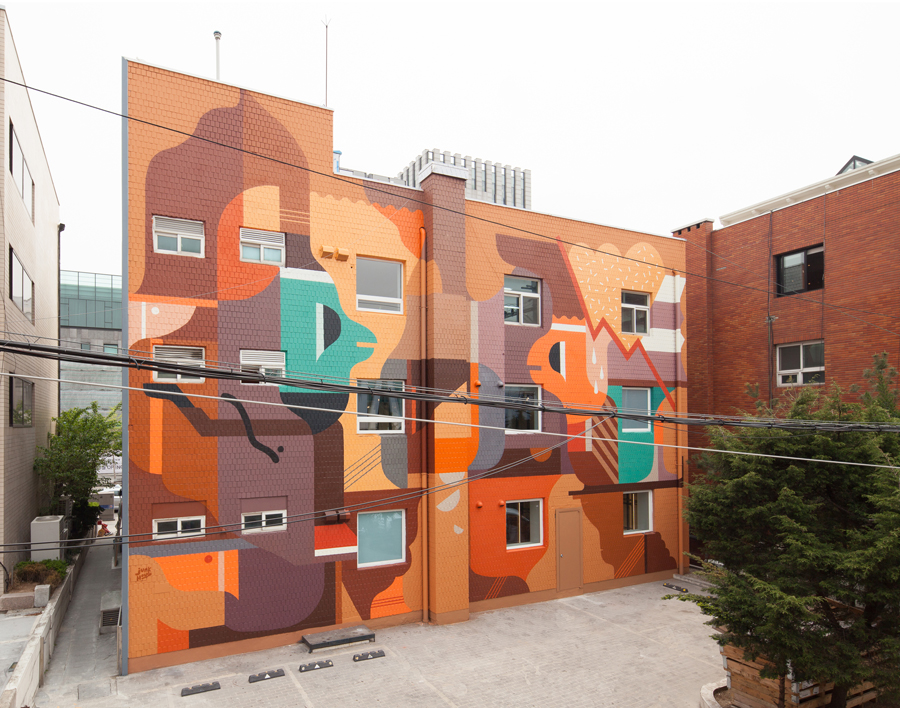 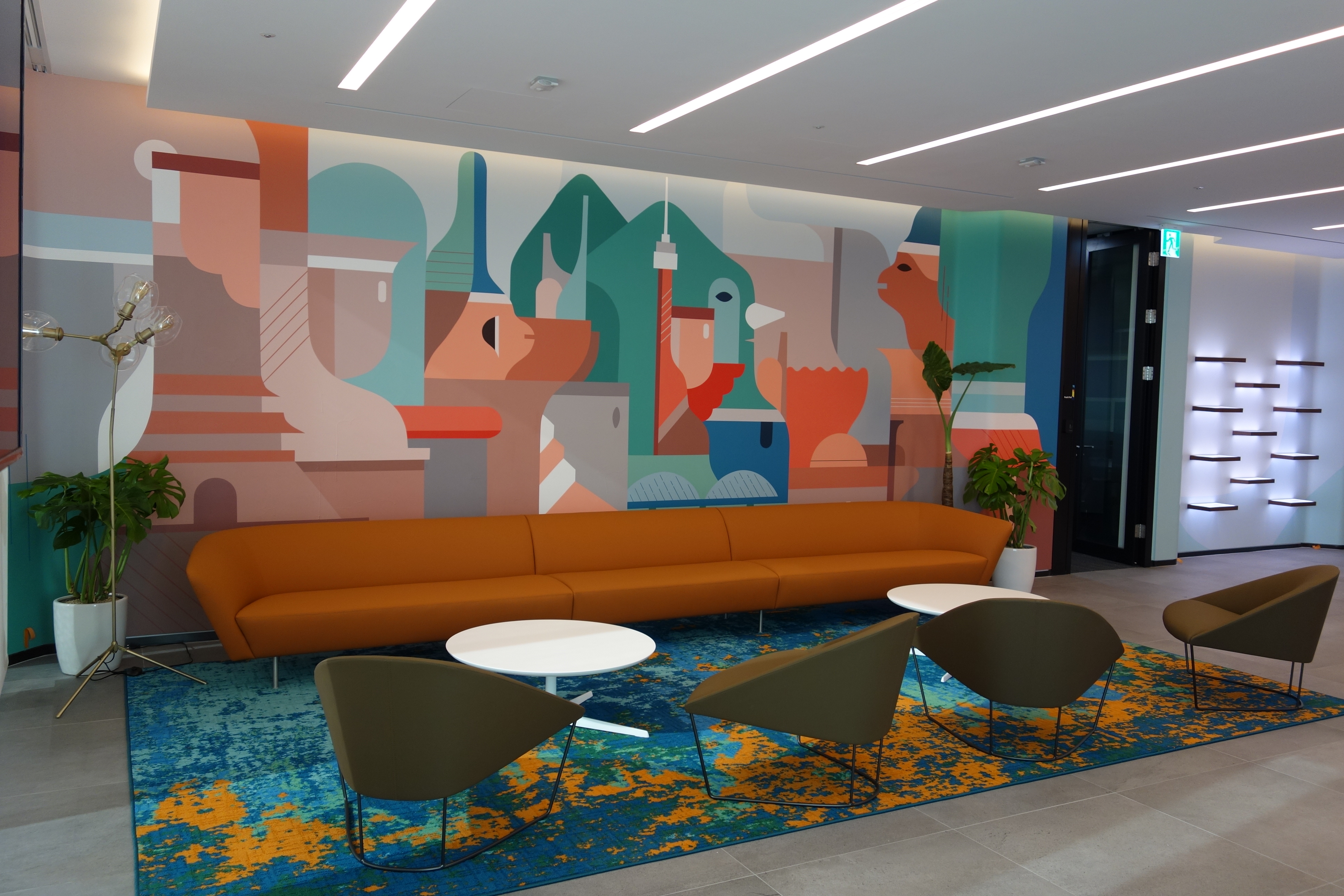 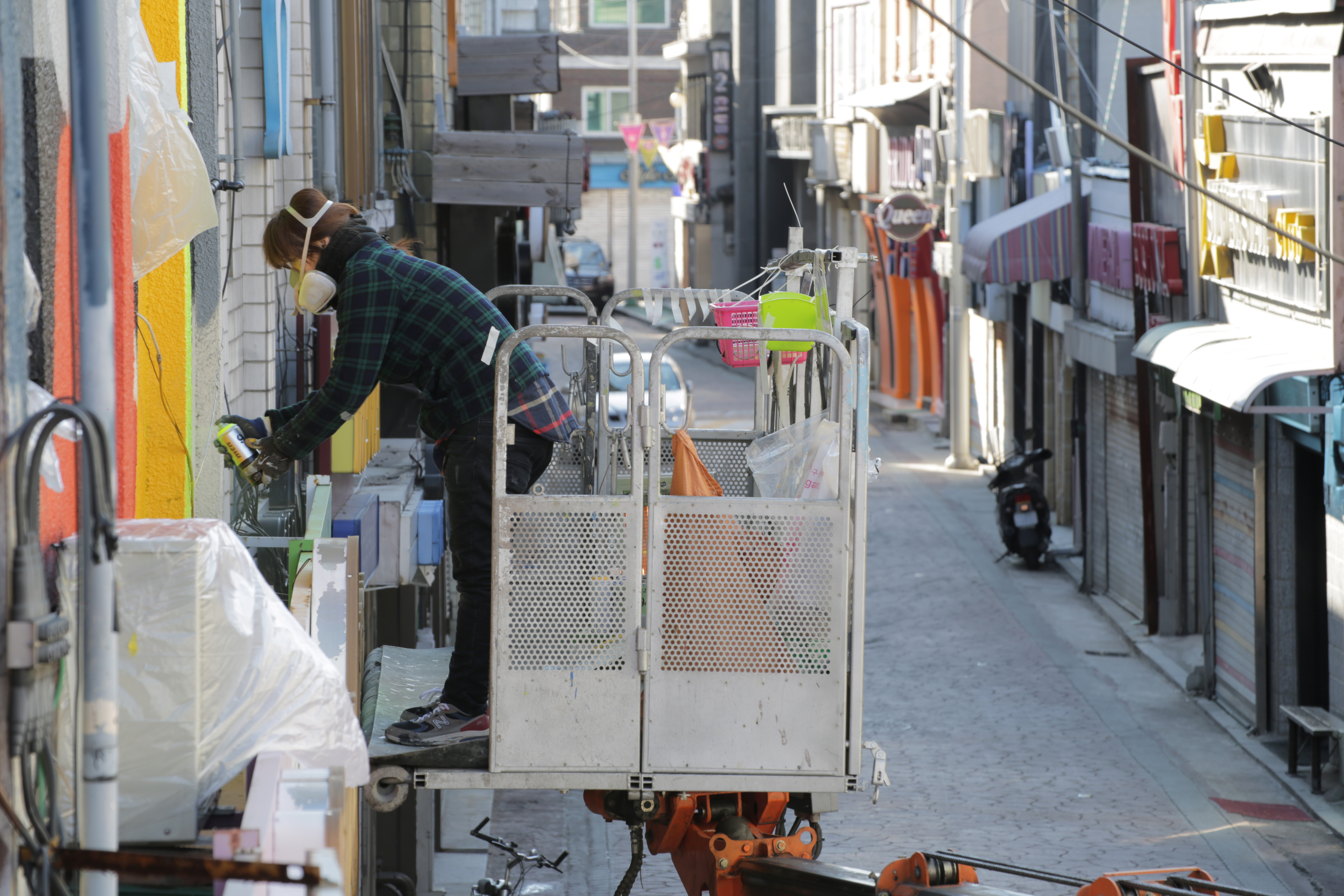 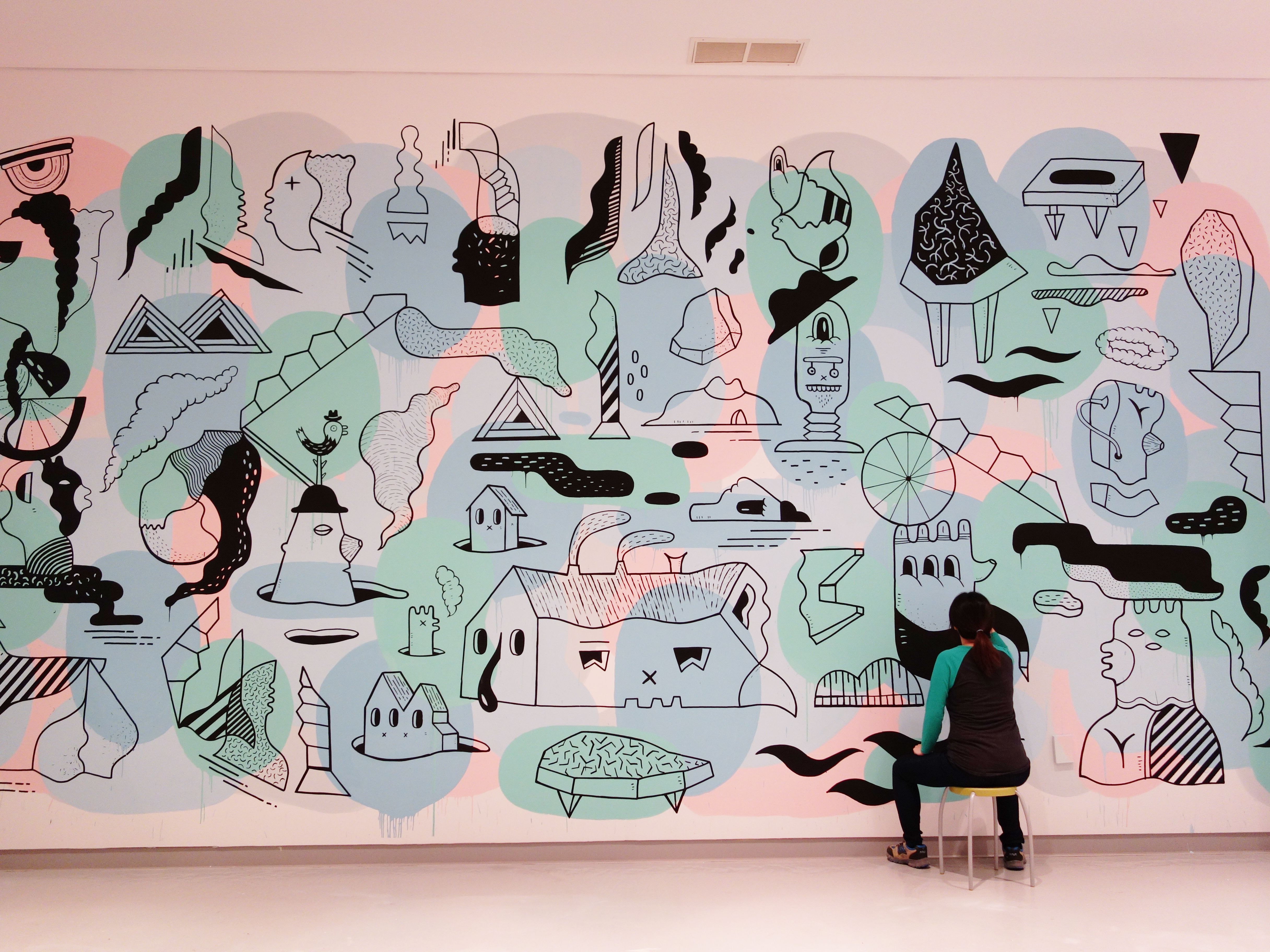 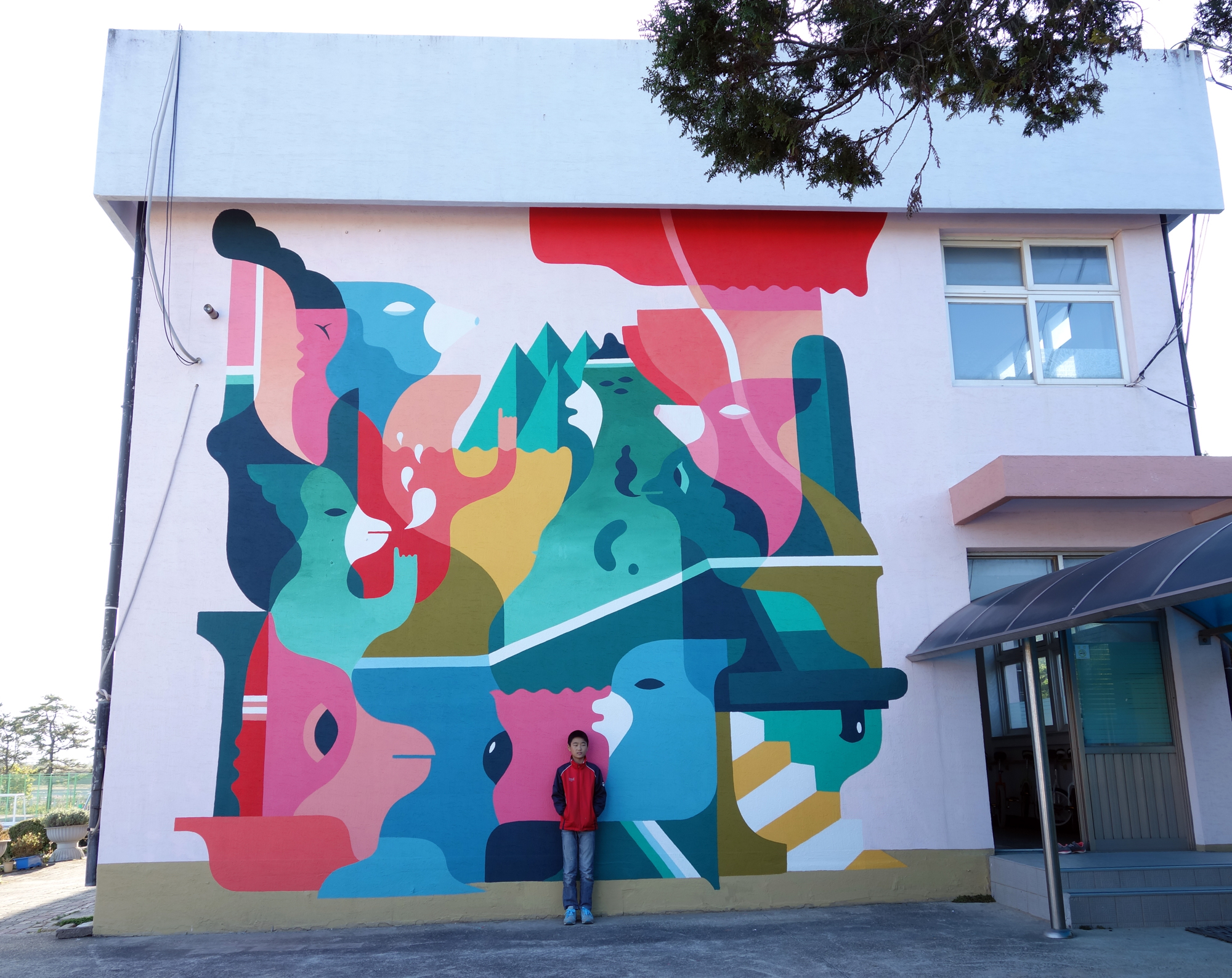 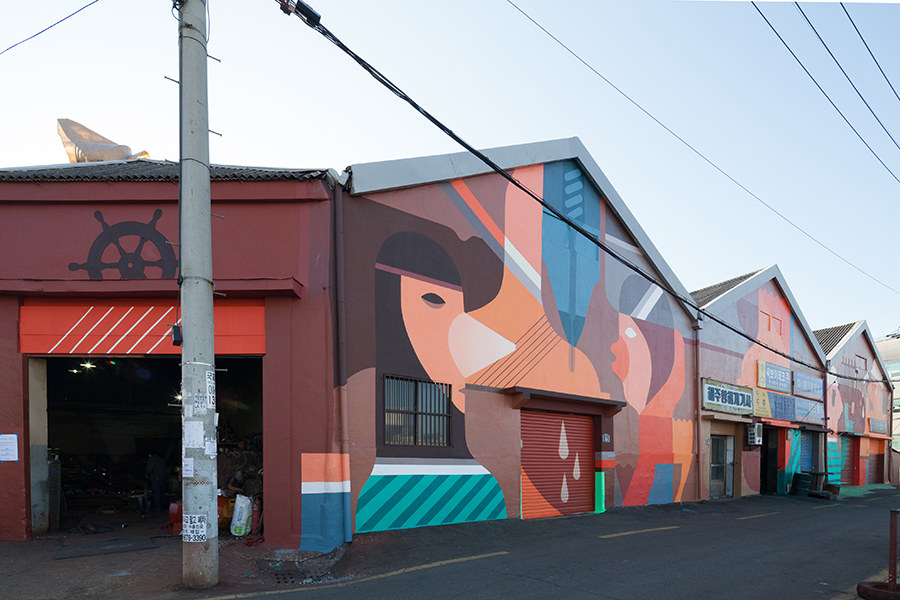 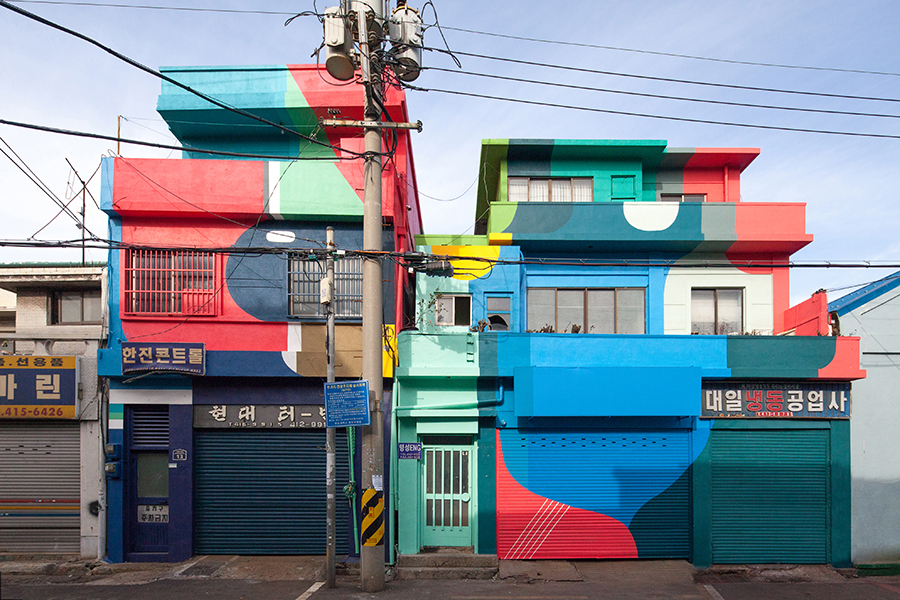 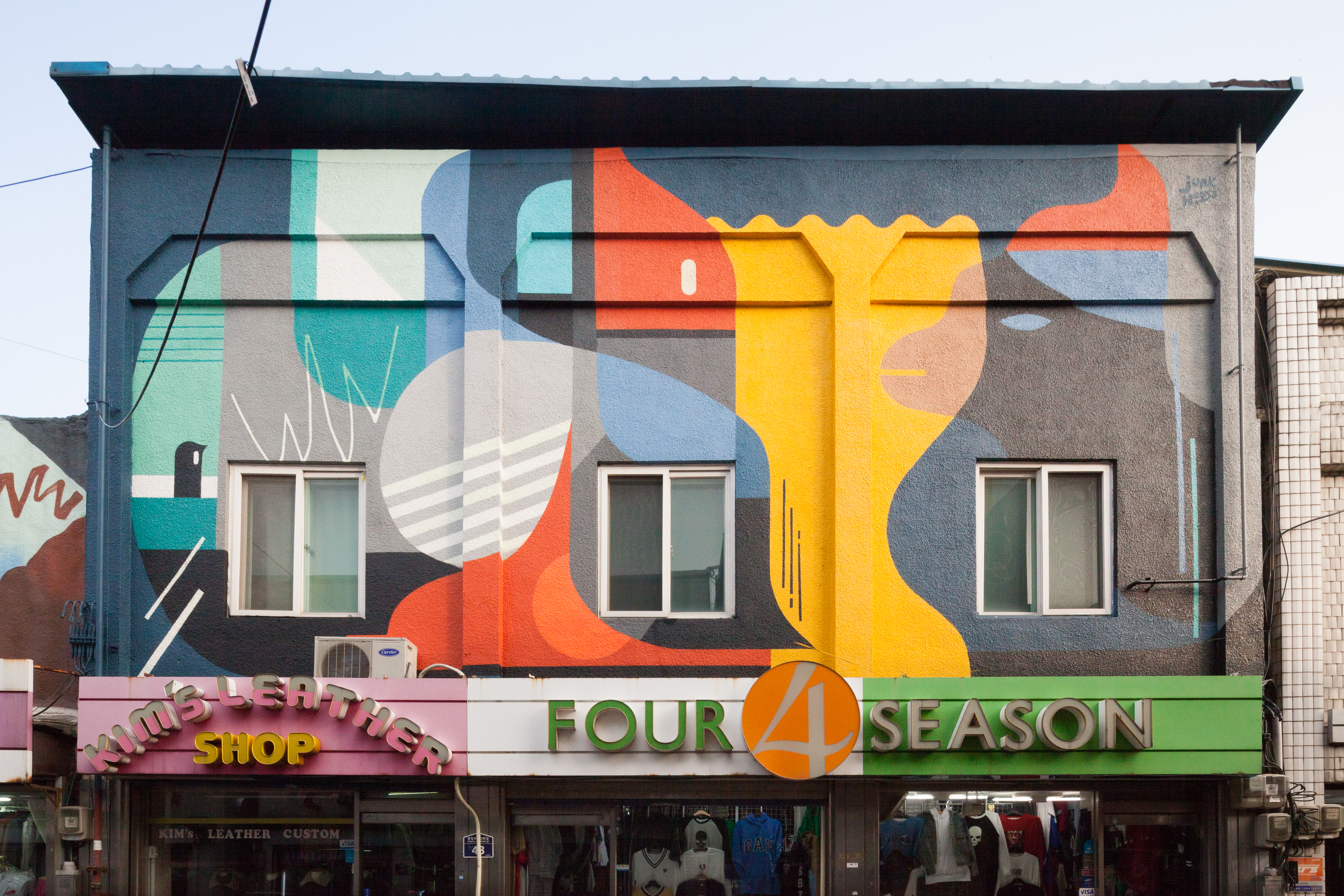 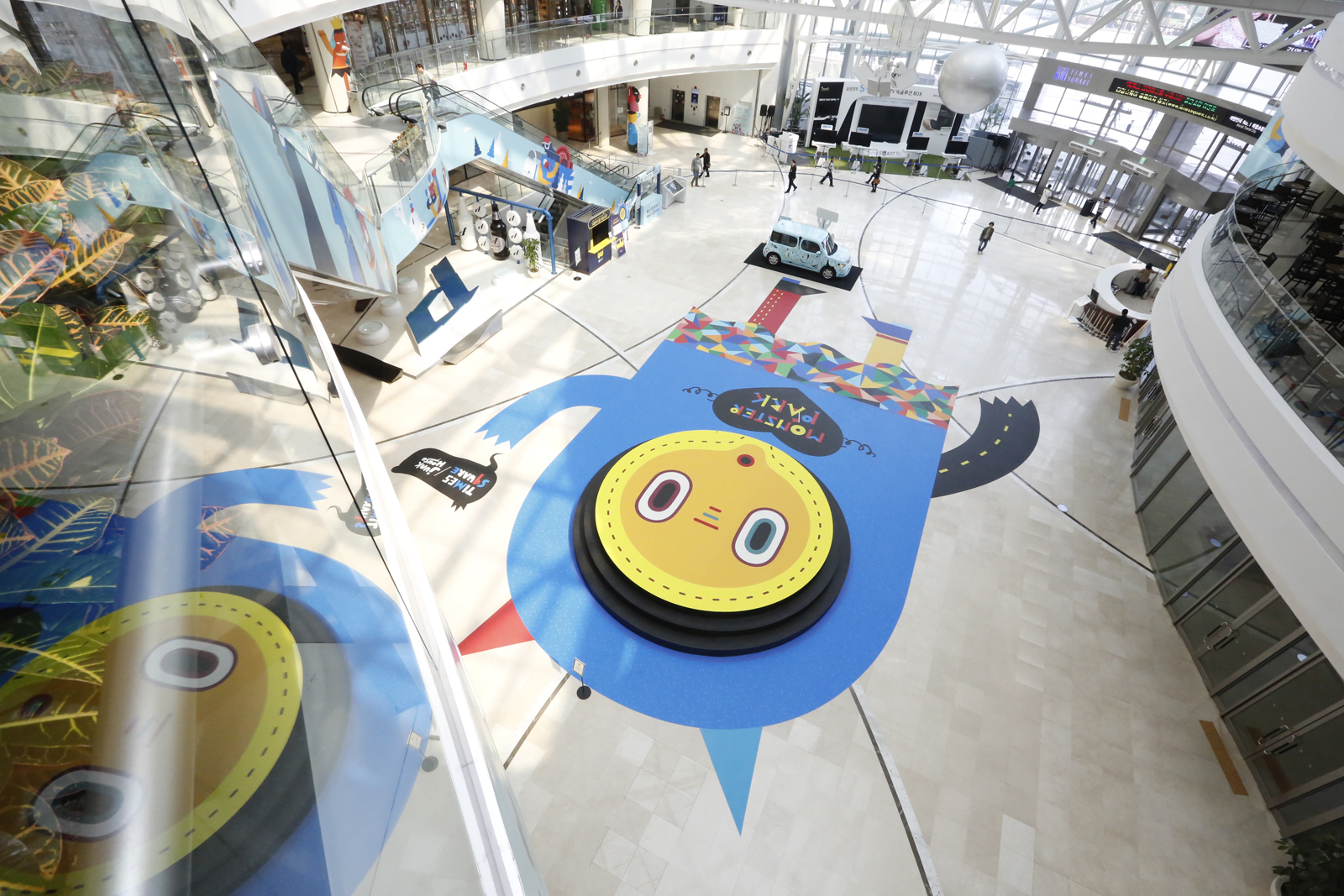 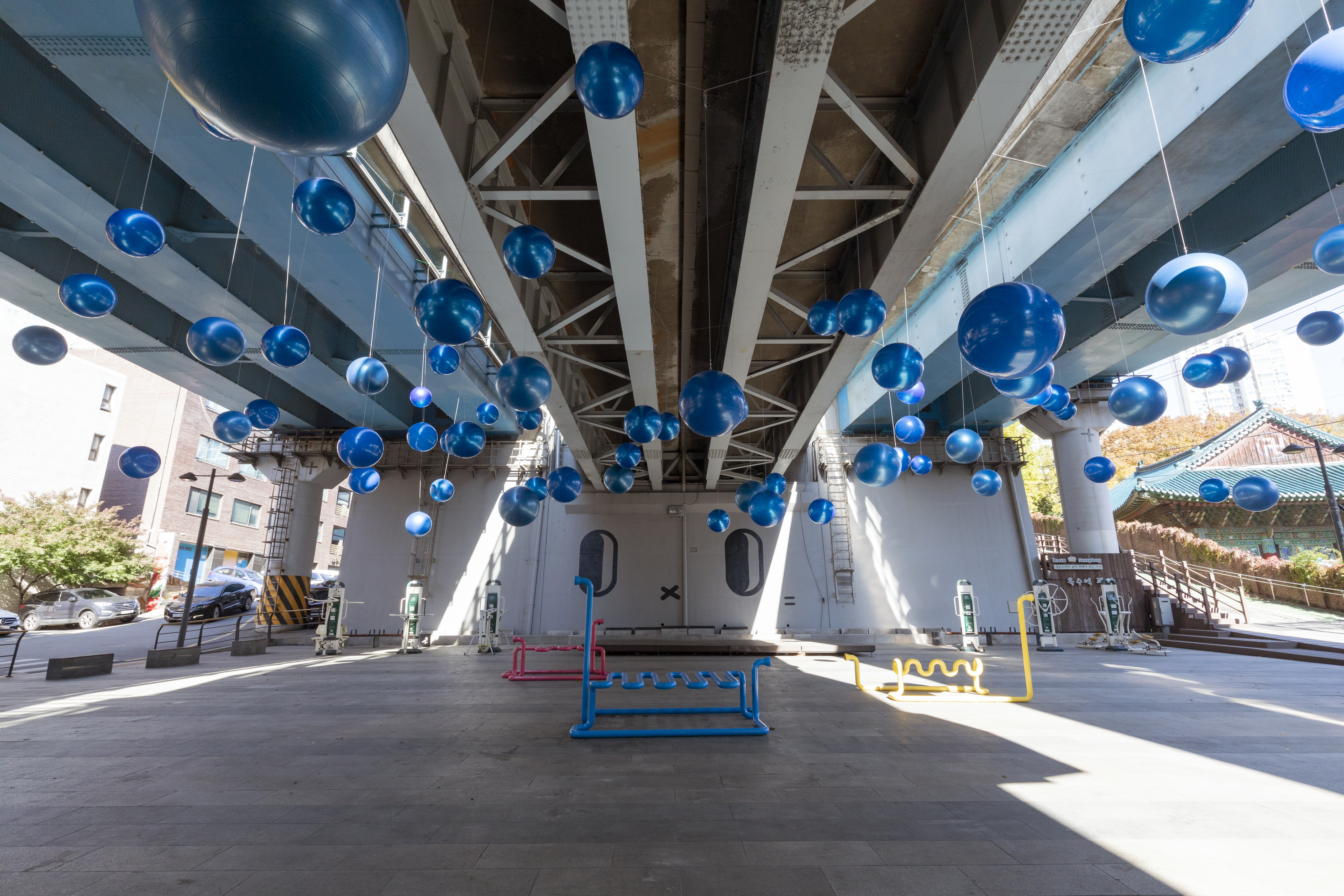 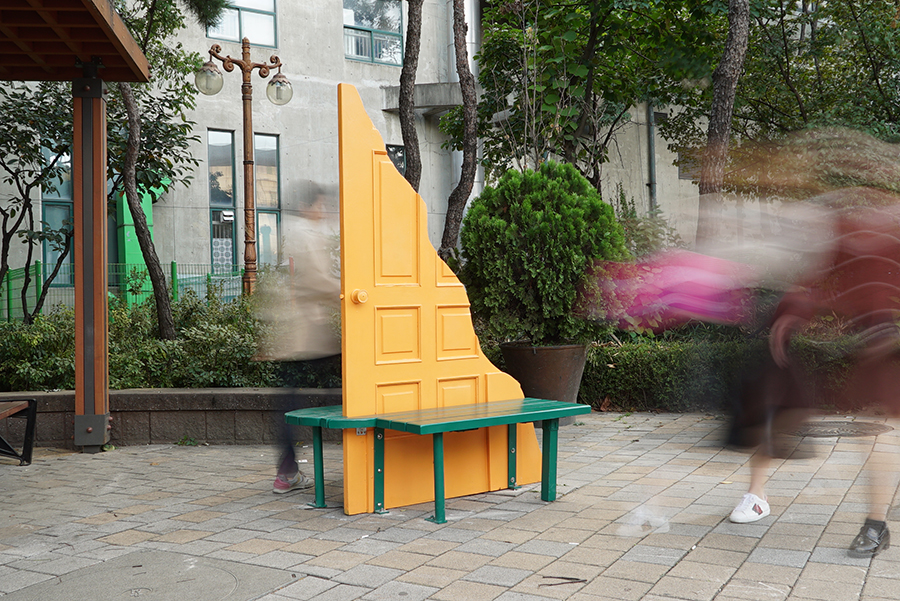 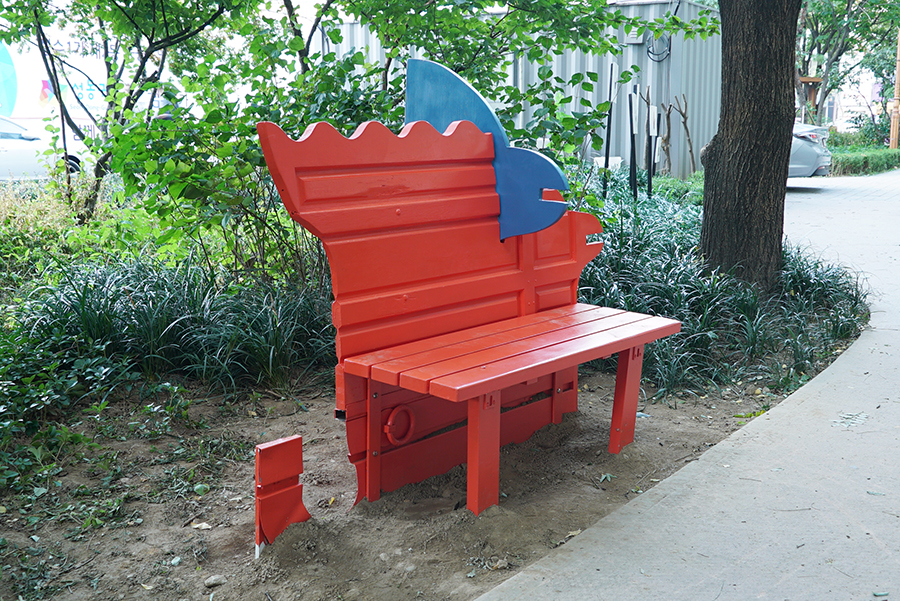 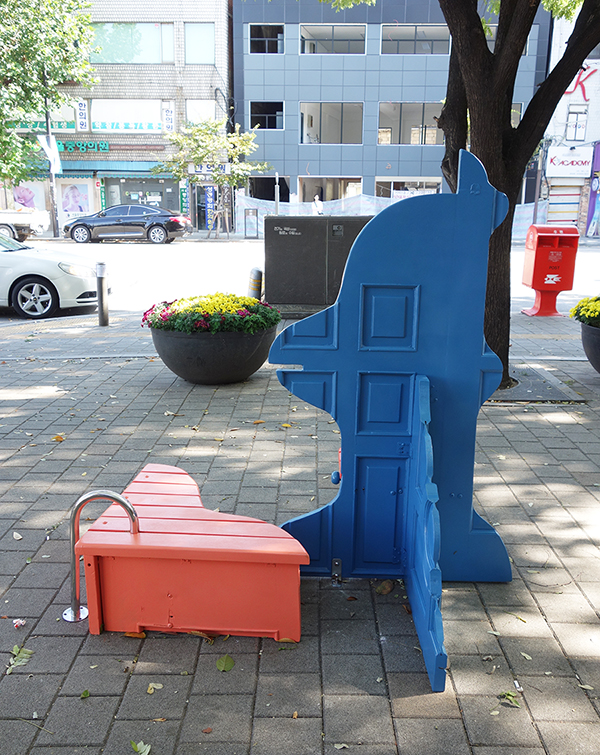 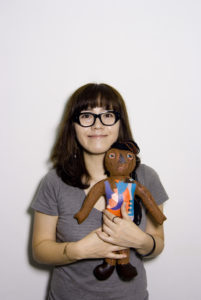 Hi. I am street artist, JunkHouse. My Korean name is, So, Su young. My English name is Sue. I was born in Seoul in 1977 and I work based in Seoul. I work in Korea without any limitations on religions and places. In the meantime, my work is inspired by the elements that make up the city as I am roaming around the city. I’m working on re-expressing those pictures on the street. Because the city and the streets are the canvas and the source of inspiration to me, depending on the ever-changing environment, my work naturally changed from monsters to mutants, and now, to a more abstract geometric form painting.

Seoul is a rapidly changing city. As I began my work, I had been exploring many parts of Seoul, especially in many redevelopment areas. I have watched the towns of the 1980 – 1990 get squeezed out to the side of history, while large-scale brand apartment complexes sprang up everywhere.

We have fast internet and fast delivery service. New hot places open all the time. Some areas are declining after a few years of boom days due to gentrification. People in Seoul are always looking for something new and trendy. It is a city where ten-year-old apartments become older than other old buildings. It is a place where people invest in real-estate due to its ever-soaring price, they’re so-called the house-poor who gave up hope of owning their houses and suffer from bank loans. The majority of the people pursue a le petit happiness by buying trendy things and eating cuisine as a way to reward themselves rather than investing in savings for the future. I also live like them.

People in Seoul are always looking for something new and trendy.

The best advantage of this city is the fast delivery system. If I order by 11 o’clock tonight, I can get a delivery box tomorrow, or I open the door in the morning to get the delivered food and goods through the overnight delivery system.

The bad thing is that the fine dust is getting worse day by day and I have to wear a special fine dust mask. Until recently, it has been severe for many days, and the appearance of a city resembling that of the end of the century was produced.

The reason why I majored in design was that I thought I could do art and creation while studying for life. I also thought that design needed further learning so I studied illustration and design in Seoul. I eventually transferred to a university in Australia to study graphic design and multimedia design. After studying abroad, I came back to Seoul and worked as a designer in an entertainment company and a web design agency. Although there were many new projects, I did not see a vision for the job as a designer due to repetitive work, night work, and the limit of the medium where I can express creativity. Because I didn’t see my vision, I didn’t have any fun; I felt I was wasting my life meaninglessly; I left the company and did my creative work to live a life as a creator. I started the project to draw ten characters a day for ten days and one character for 10 minutes every 30 days with one month left. I created more than 100 characters, and in the next year, 2004, I started posting the characters out on the street. This was the start of my street art. I have been working on my creative activities ever since.

My family, especially my mother, is still very worried. They are always pushing me to start or learn to make money to prepare for the future and the old age. I am fortunate to have modest conditions for creative work after 14 years of career. However, because there is still no guaranteed future and stable regular wages, I don’t plan anything for the future. However, my family feels frustrated with my attitude of not worrying about anything. Besides, they are not interested in art or any creative activity.

My family, especially my mother, is still very worried. They are always pushing me to start or learn to make money to prepare for the future and the old age.

I am familiar and comfortable to do creative activities in ‘public and open spaces’ while doing street art. In the meantime, I have been drawing pictures all over the city, and nowadays I am experimenting with sculpture and installation oriented works. By continuously installing experimental public arts, I intend to inspire and energize the public with large and small experimental setups in various public spaces rather than in the space of White Cube.

Dave Cooper, an American cartoonist. I was inspired by his comics before becoming an artist.  Because I was a science fiction maniac, I was influenced by the new world with animals, plants, cute and witty characters, new languages which he created in comics based on SF.  I also love his oil painting that esthetically depicted plump women in sexual fantasy.

My close friends are independent and strong women. Married friends are mostly working mothers who work and raise kids, and most of the single friends operate their own business, date, and enjoy the single life. Although they exchange light banters with me casually, they’re strong and devoted to their work. On the other hand, they are more mature friends than me who care for others, share their troubles, and find solutions when I am tired.

Because I grew up watching comics in my childhood, it seems that the comics influenced to become a creator. There were many outstanding female cartoonists such as Shin, Il-Sook, Lee, Me-Lee, Kang, Kyung-Ok, Nah Lee, Yeah-Lee, and Park, Hee-Jeong. In the 80s and 90s, I borrowed romance comics and boy comics from comics bookstore or rental stores, copy drawing the pictures, and I was always waiting for the next issue to come out. When the long waited comics came out, I used to fight with sisters to read them first. When my favorite comics came out, I would rush to the comics bookstore with a small amount of pocket money to buy them, and I made my collection. Nowadays, internet webtoon has become a new paradigm which built a webtoon paradise, and more cartoonists seem to work in a better environment and support than ever before.

Whether doing street art or large-scale public artworks, it is environmentally or physically demanding work compared to painting on the canvas in the workshop. However, I have never been treated differently because I am a woman with physical limitations. Creating a new work in a new environment is a challenging and difficult task for anyone let alone their of gender, and there seems to be no limitations or sanctions based on gender issues in artistic activities.

Creating a new work in a new environment is a challenging and difficult task for anyone let alone their of gender.

I hope they try free creative activities with no restrictions on space. No obstacles and excuses would limit them because they’re women and weak, or the work is dangerous. I can make up for my vulnerable areas by asking for help and collaboration. Just do not be afraid to do a more experimental and fresh movement.