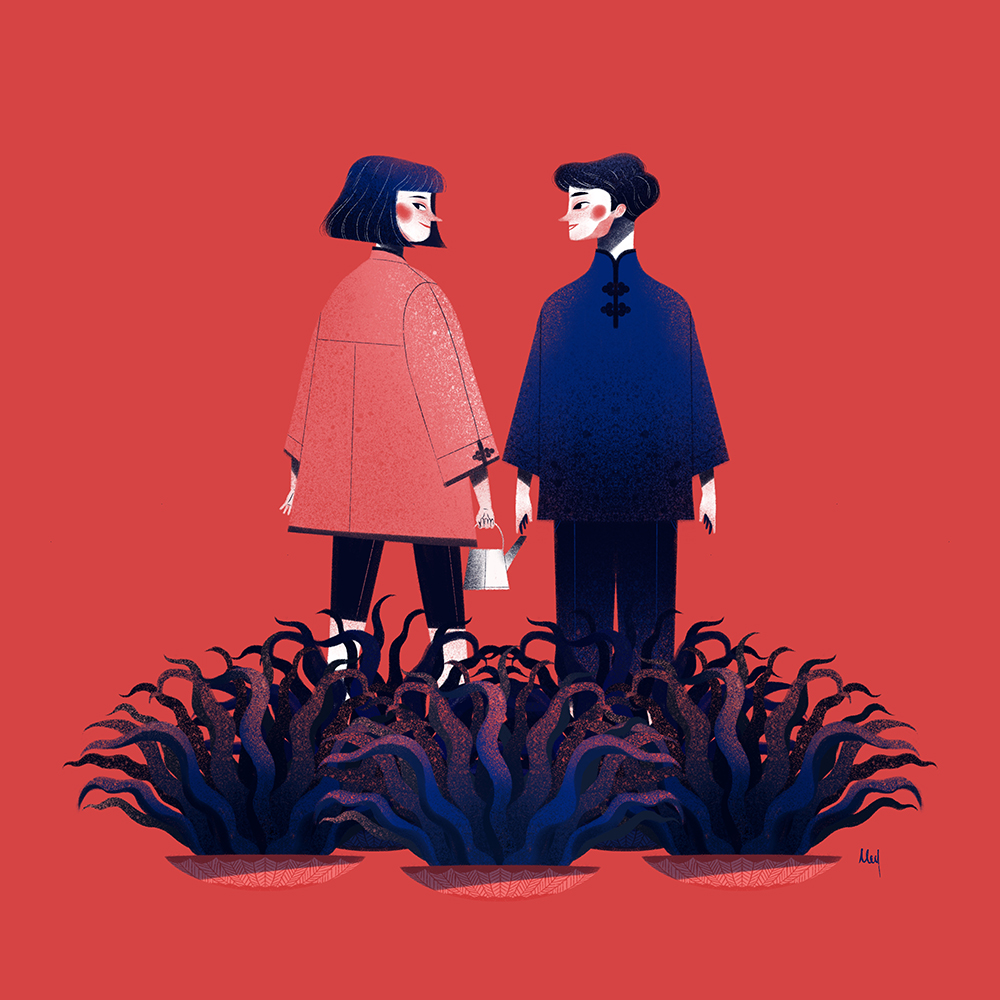 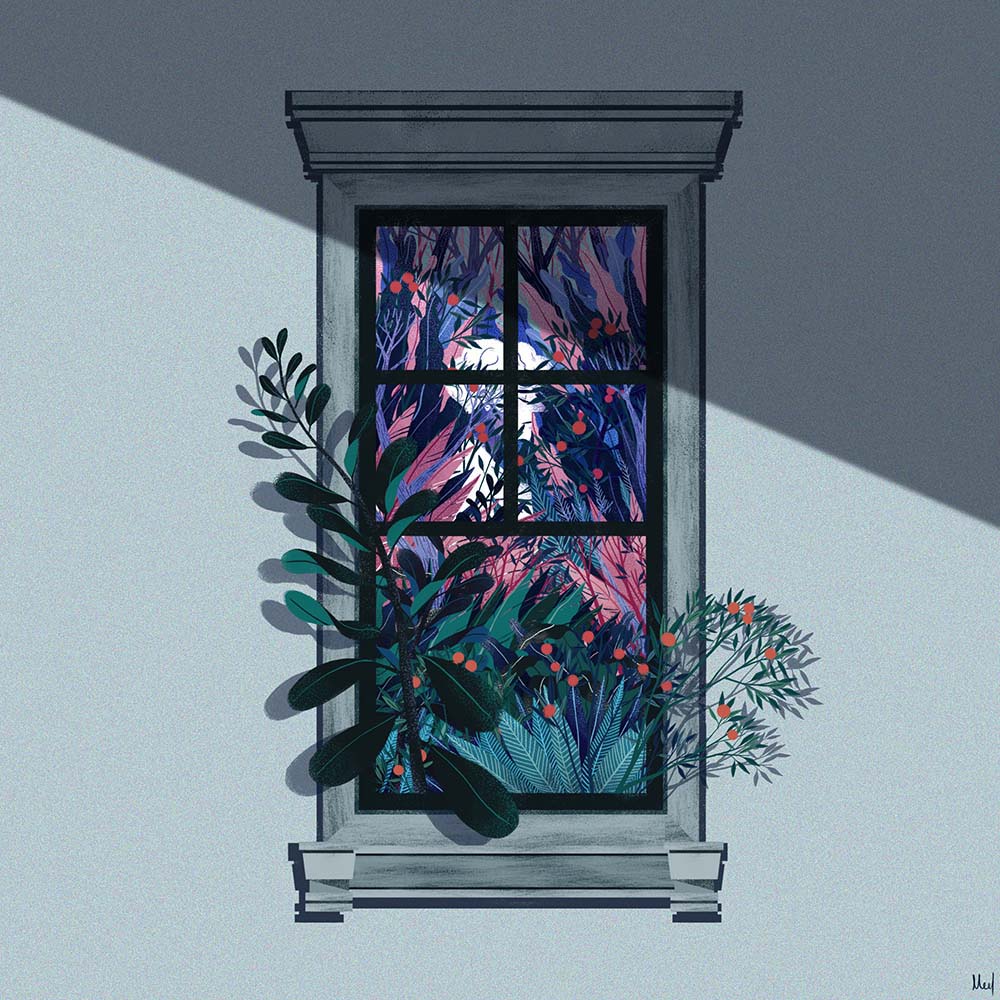 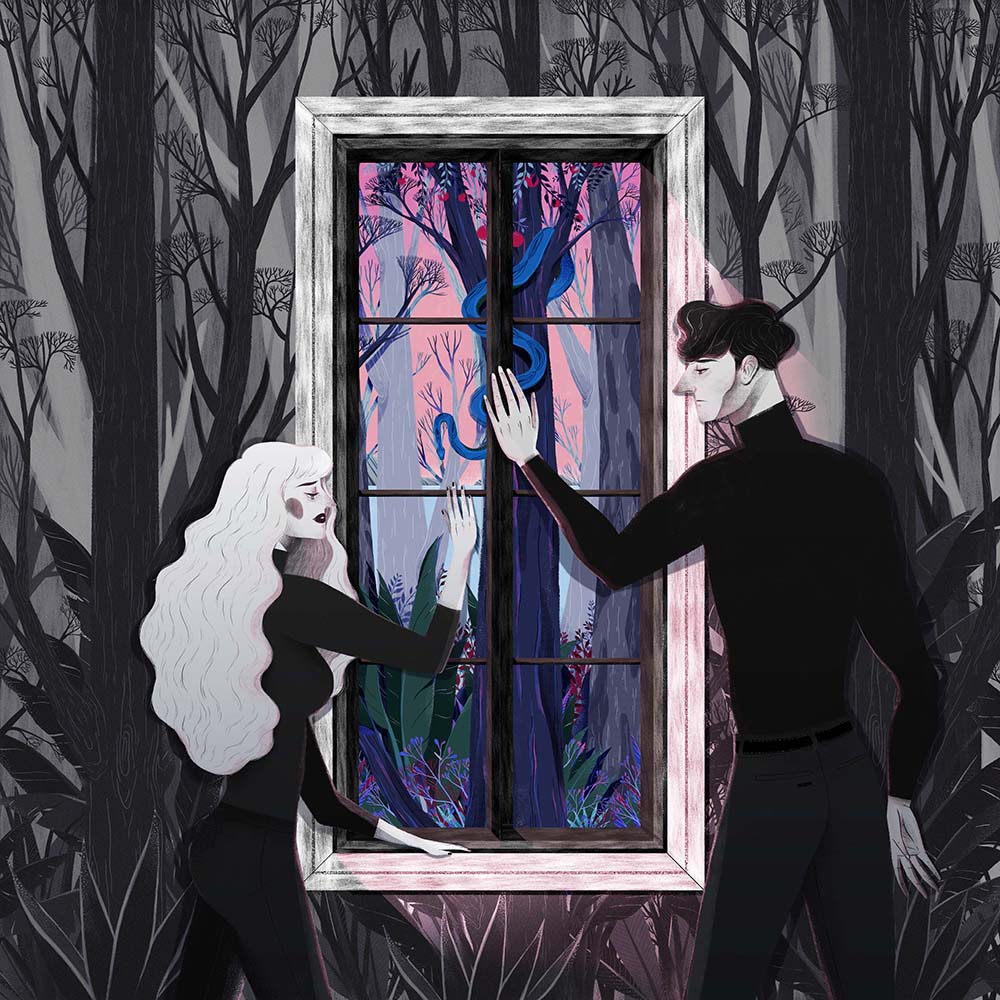 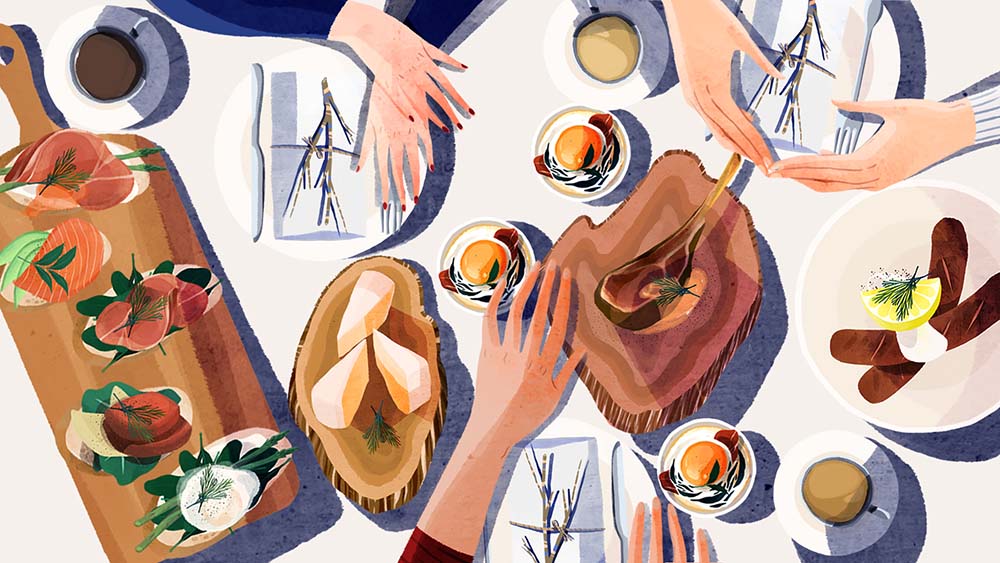 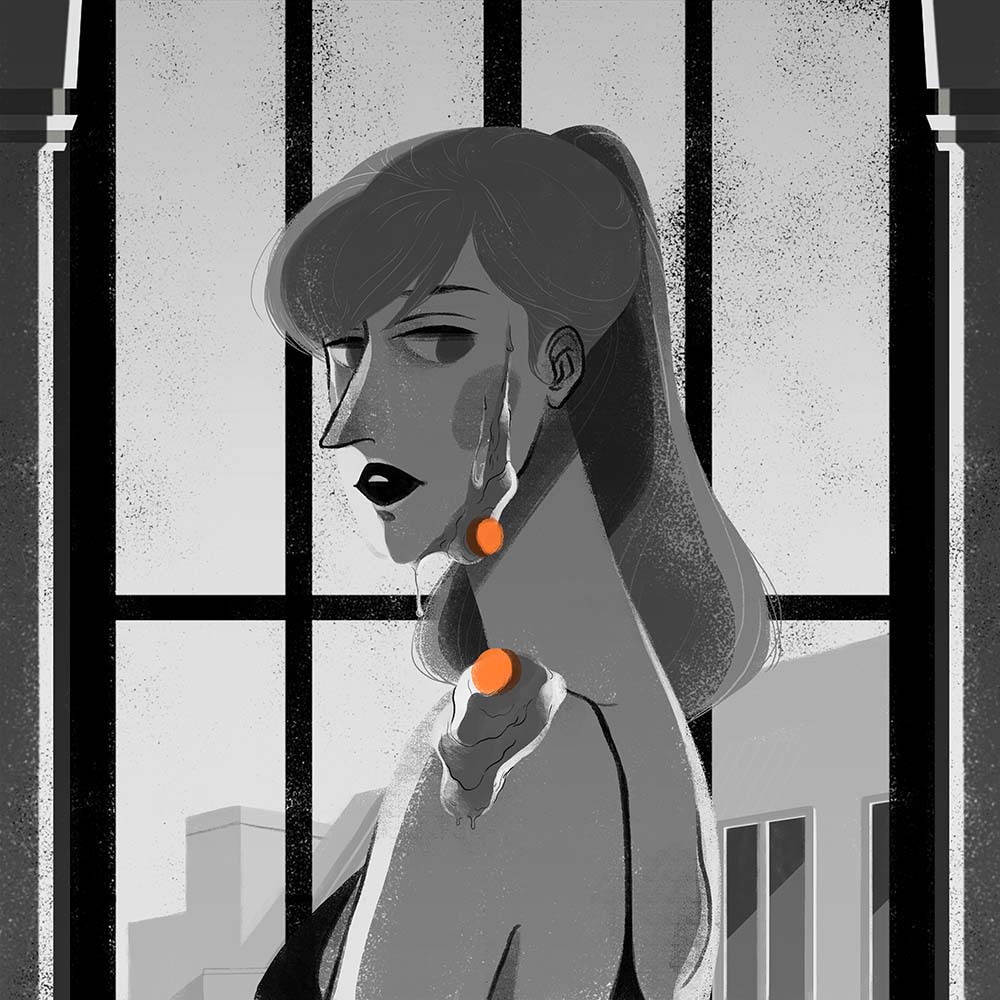 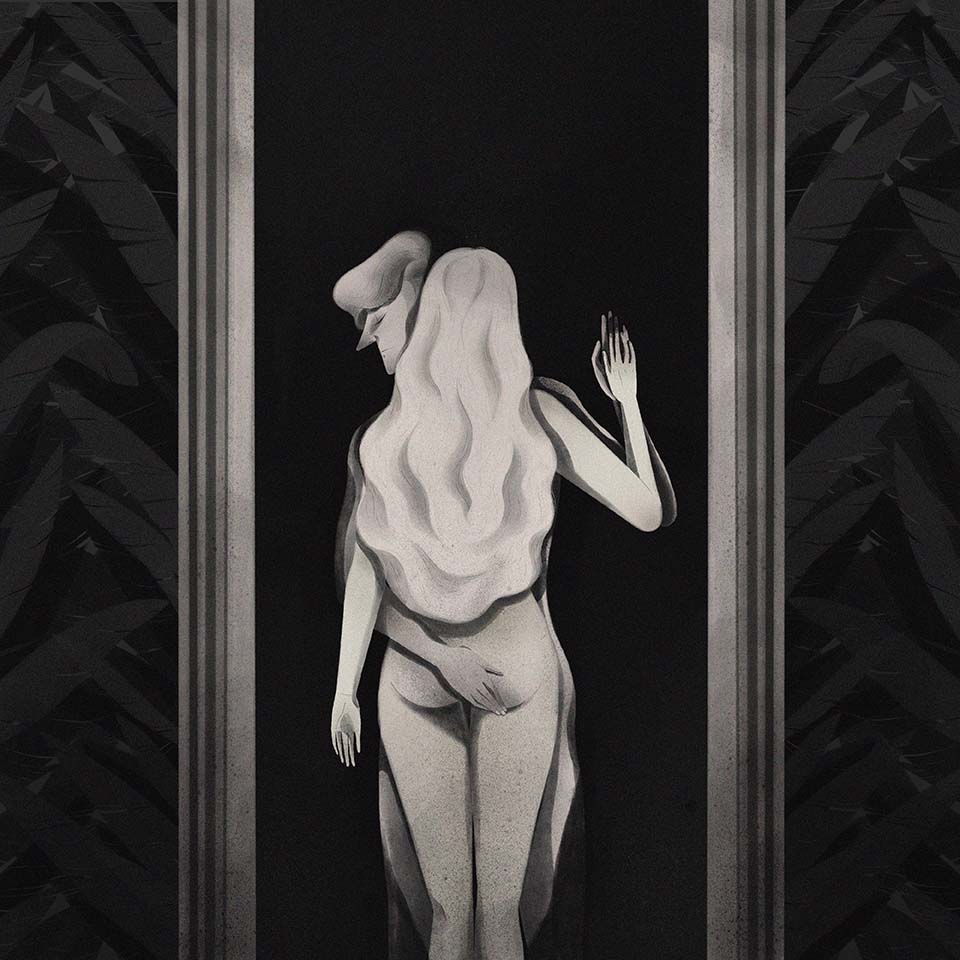 I’m Meel. I’m an illustrator and graphic designer based in Phuket, Thailand. I graduated from Faculty of Digital Art, Rangsit University in 2013. My work intends to communicate, question, and express a message, idea, and emotion. Furthermore, my work tends to depict concepts of a narrative, the surreal, a belief, portraits, continuous moods of a relationship between lovers, losing, leaving, desiring, and the unsaid.

Phuket is extraordinarily beautiful. I was born and raised here. My city has changed throughout time. Most of my dear friends and family live here.

The best thing – I love to live here. Most of my family and friends live here. I am pretty much familiar with my city. I love the beach, sand, sky, the shade of shadows, and the fishes.

The worst thing – It’s quite crowded in the city and there is traffic. I don’t like it when I’m going out during rush hour. The city is always hot during the high climate. I feel stuck here with the hot and wet weather sometimes and it makes me uncomfortable while working.

I have been working as a freelance illustrator since I was a student. I made artworks for personal projects, which was kind of a practice for my portfolio to give it variety and make it look interesting. I started working as a character designer for children’s TV shows, but the style I had then looked different than now. After that, I stopped doing freelance for a year since I got quite busy with my art thesis. It was a short animated film called “The Blanket” and it surprised me that it won many awards. Soon after, I finished university. I continued to work as a freelance illustrator with friends who I was in university with then I came back to Phuket and got a job as a graphic designer in an architectural studio. At the same time, I’m also a freelance illustrator. Last year, I got represent by Illozoo, a visual communication agency and I’m doing both positions now.

Some of them, yes, but not all of them. I was born and raised in a normal Asian family and I went to the normal Thai schools. I was taught to grow up and do ” THE REAL JOB” and that if I will be an artist, I will be poor and die. This is not true, everyone can choose their own careers. Do not get intimidated or follow other people’s expectations. Parents expect their children to grow up and be successful in what they aspire to achieve for them. I was surrounded by these types of people and at that time my decision wasn’t typically accepted. I was tortured to be a kid in their control. It was bad for me. Some of the older generations didn’t allow me to argue or explain anything, including asking questions. I quite opposed them. Actually, I always knew that I’ve done better than what they wanted for me. I had to prove to them that I can earn money and honors by being an artist. Eventually, they accepted and respected my choice. I ignore every negative comment, bias, and toxic words from others and only I only take the positive and useful comments that help me develop myself.

I always knew that I’ve done better than what they wanted for me. I had to prove to them that I can earn money and honors by being an artist.

To get more interesting, crazy, and fun projects from other areas around the world.

I was an animation student so I want to collaborate with many filmmakers and animators. Some of them are Daisy Jacob and Chris Wilder. They are British filmmakers who directed short animated films that were nominated for an Academy Award for best animated short film and won a Bafta award. They make very interesting life-sized animations which combine the ideas of 2D, 3D, and stop-motion. Having the chance to make animation is a very big opportunity for me because I used to do this. Since I finished university, I am no longer on the animation road and I miss it. I wish I may have a taste of it again someday.

I’m so lucky that all the females I know have never been violent. Sexual oppression here may not be as violent as some other countries but people here believe that males have to lead and look after the females. It made the males in our society very strong. The females are expected to be followers and to be responsible for the work in the house. Most of my friends are women. We are confident without anyone leading us and we believe we have the right to do everything that men can do.

Most of my friends are women. We are confident without anyone leading us and we believe we have the right to do everything that men can do.

There are a lot of illustrators in Thailand. I think Thai people have very good skills in drawing and in their techniques. I love Tuna Dunn her illustrations and comics are very interesting, it’s simple, clean and minimalist. I also like Kanith, an illustrator and also my friend. She’s very witty and clever, her works give criticism on people’s behavior and beliefs.

For me, it’s not about being a female in the industry. The illustration community in Thailand is very small and most of them are in Bangkok, though I have never joined them. Personally, the biggest challenge is that I don’t have many big Thai clients. Most of my clients come from friends or the company that I used to work with. My most interesting projects come from overseas, they respect my style and let me work fully.

Personally, the biggest challenge is that I don’t have many big Thai clients. Most of my clients come from friends or the company that I used to work with. My most interesting projects come from overseas, they respect my style and let me work fully.

I used to panic when nobody would hire me. In these times, I would look at myself and ask “What are the mistakes here? What does my work lack?” and I would fix it immediately. Also remember, do not disregard your gift. Don’t let anyone tear it down and never abandon it. You have to listen to your inner voice.