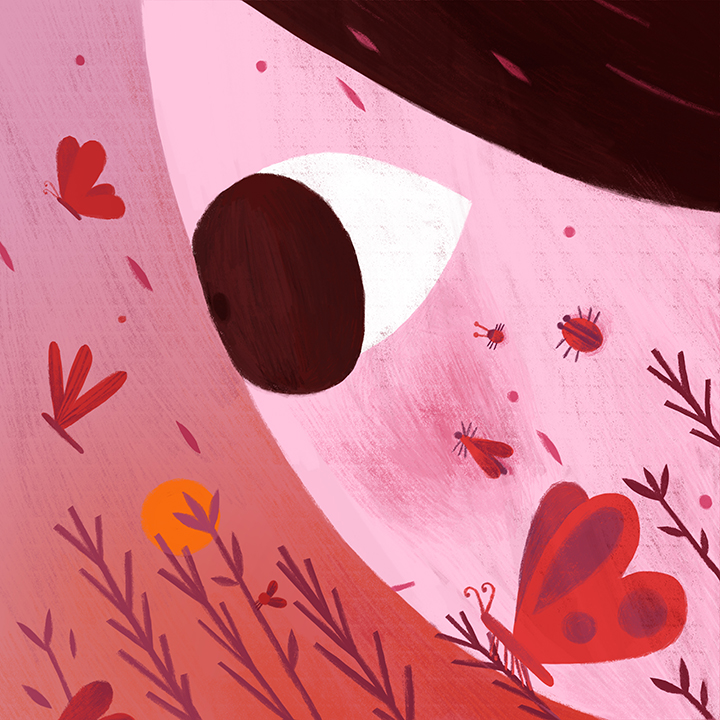 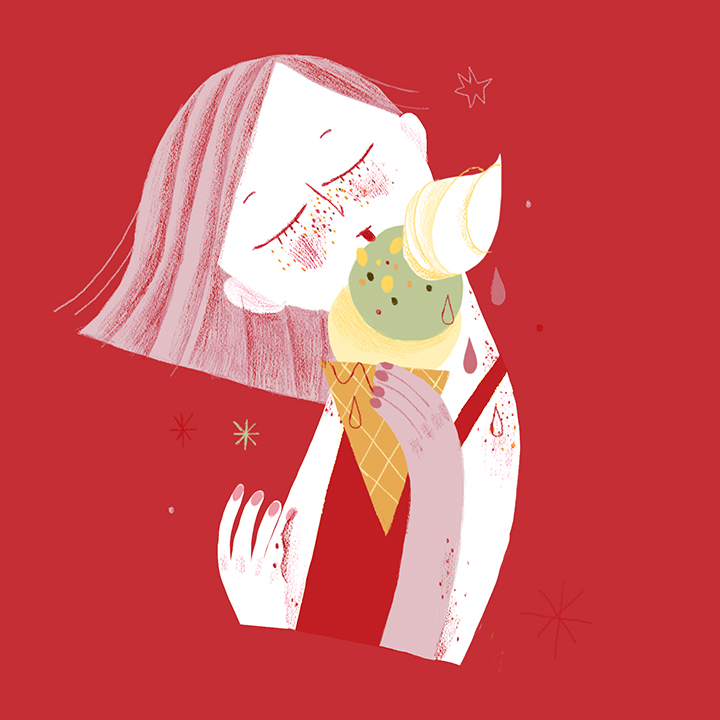 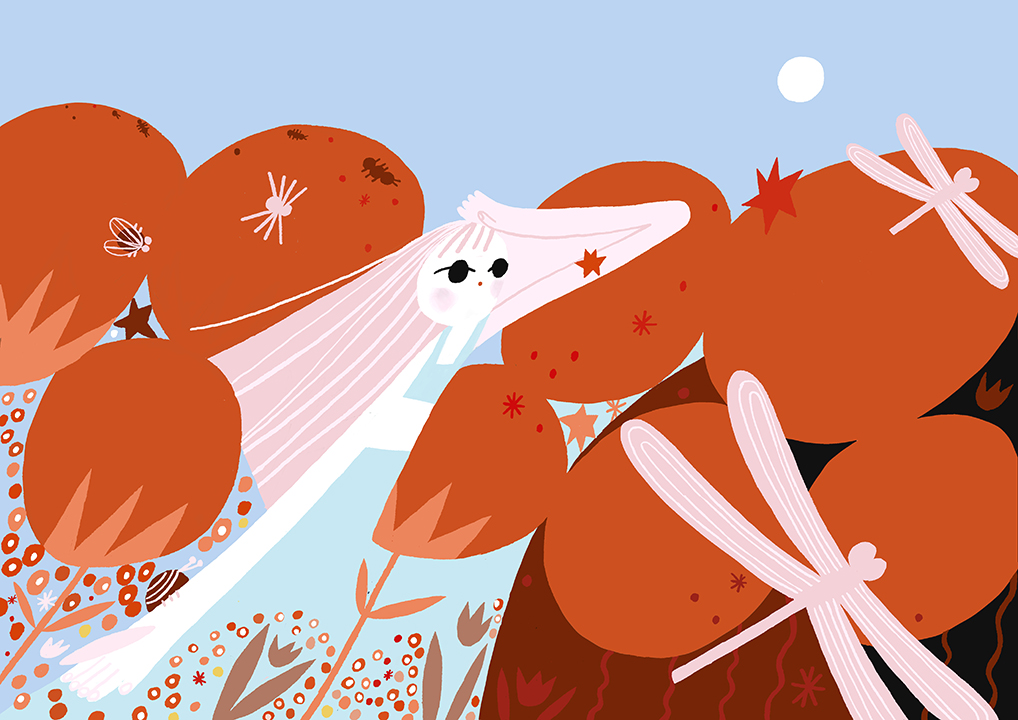 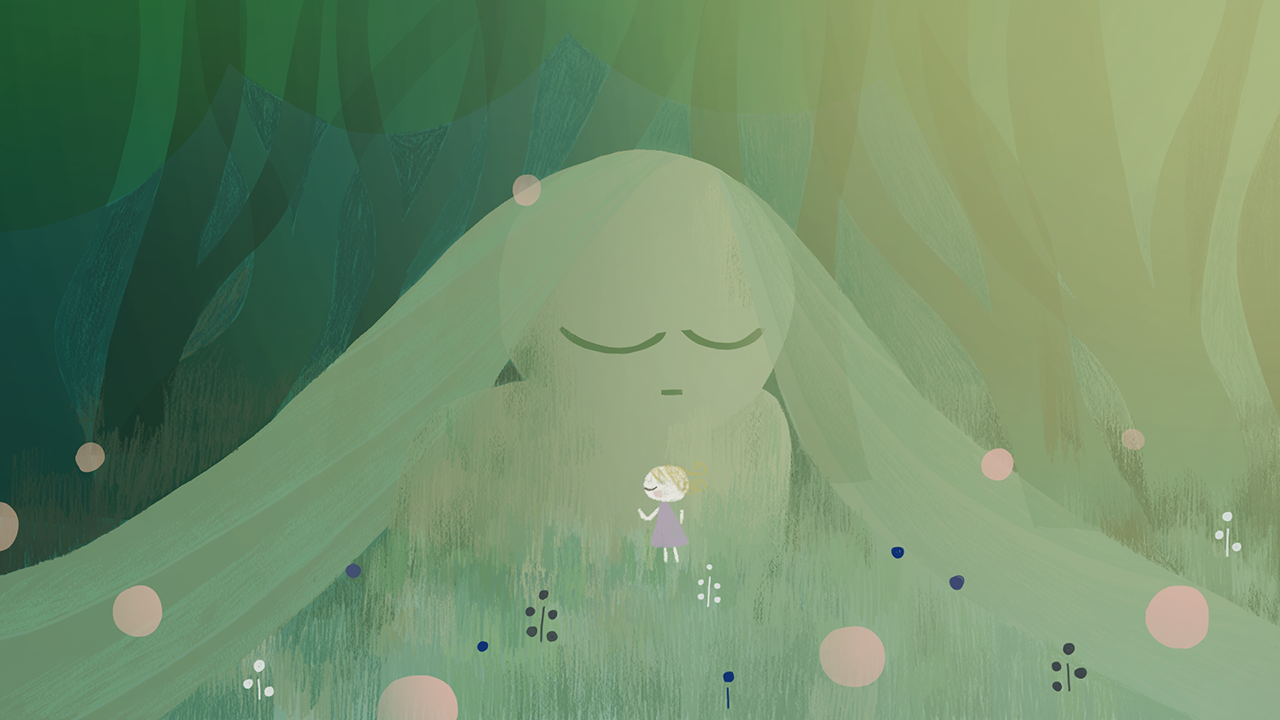 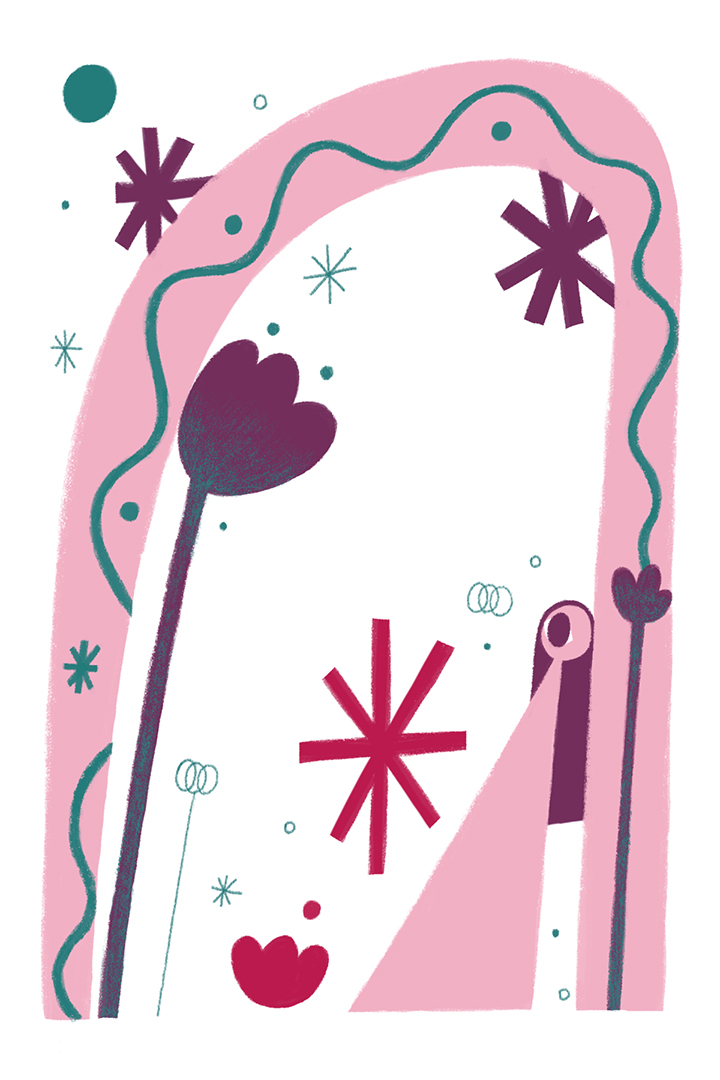 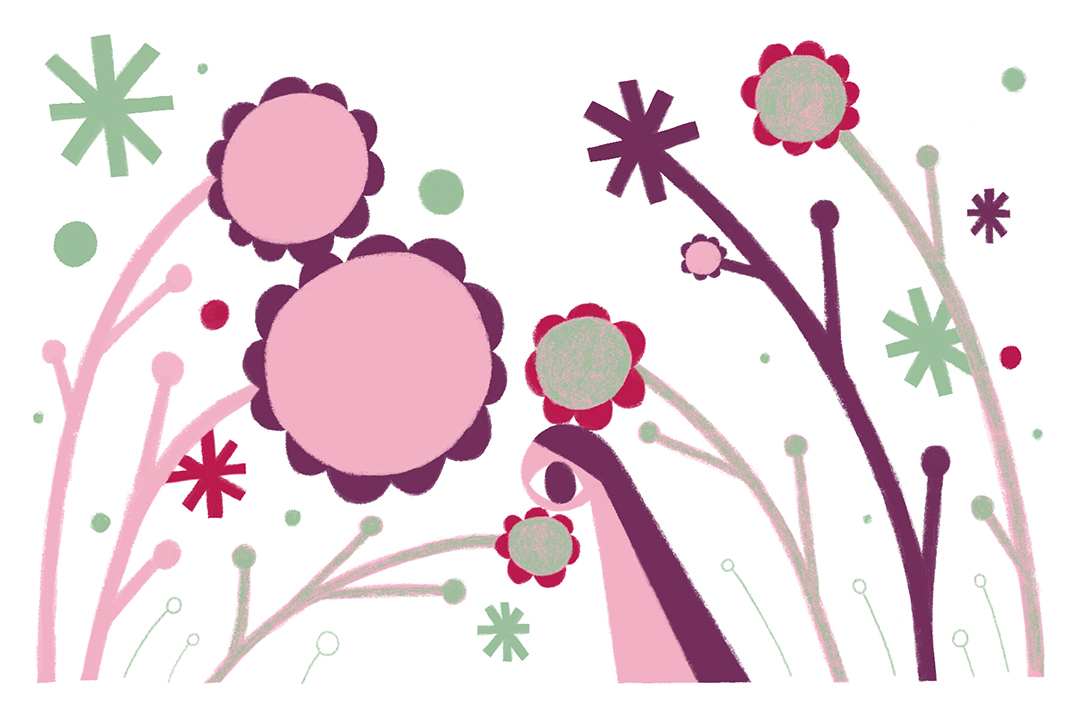 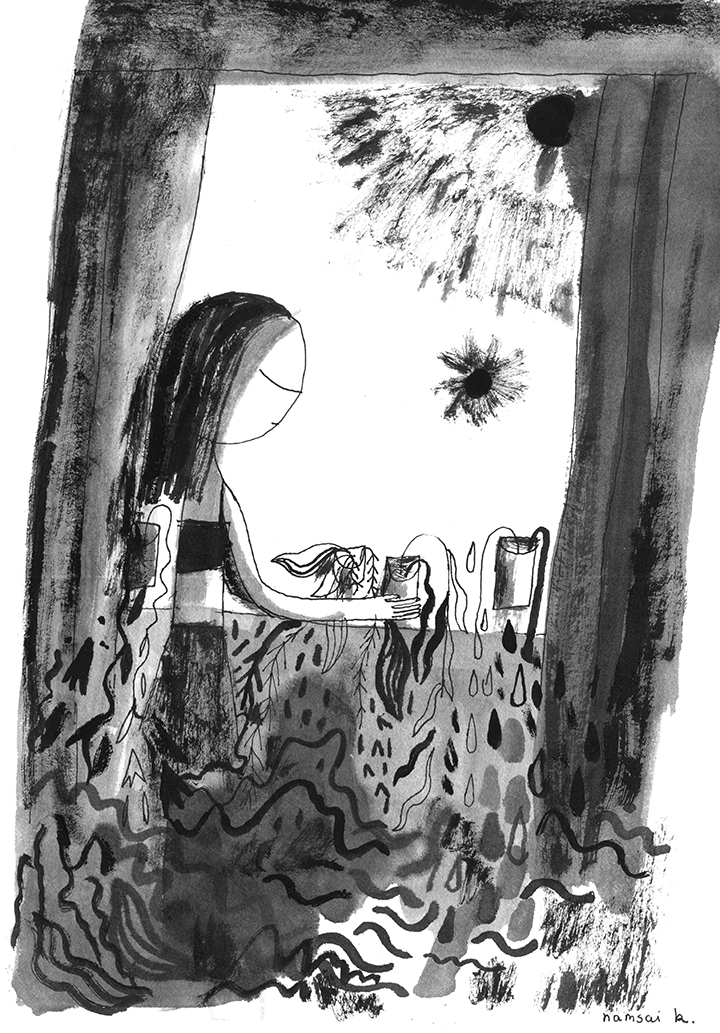 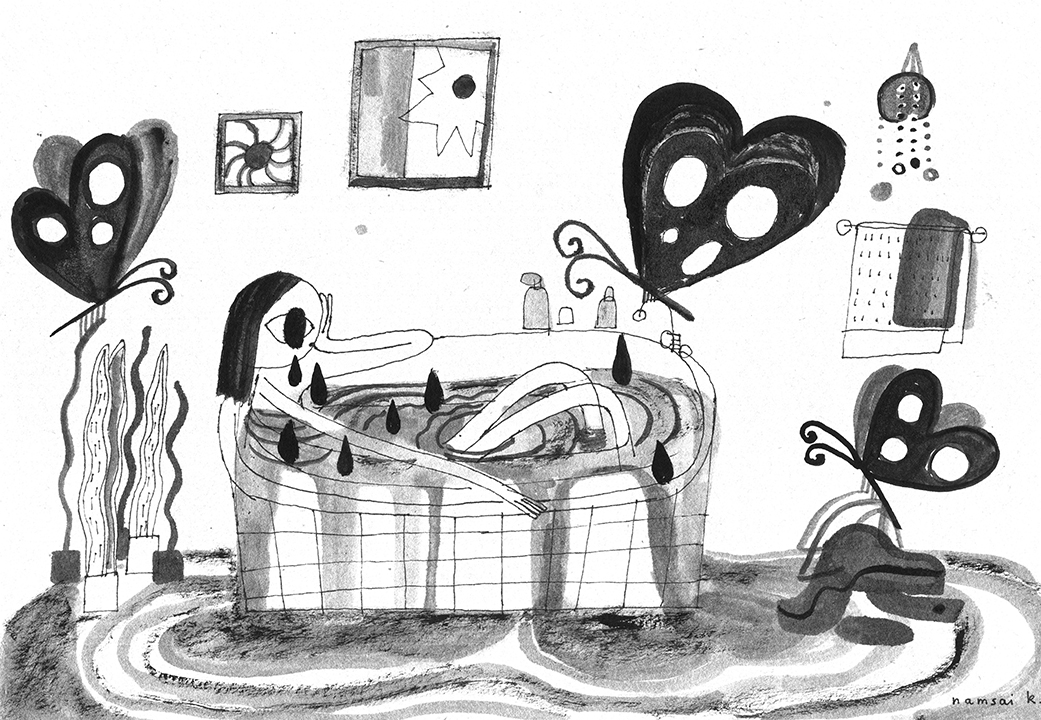 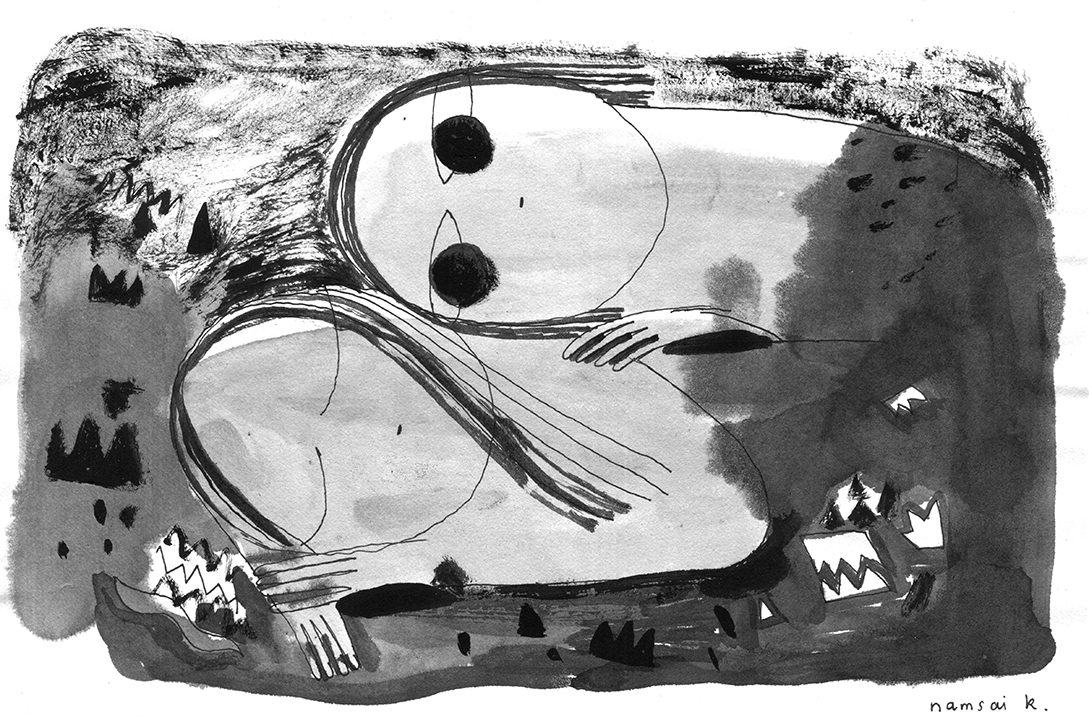 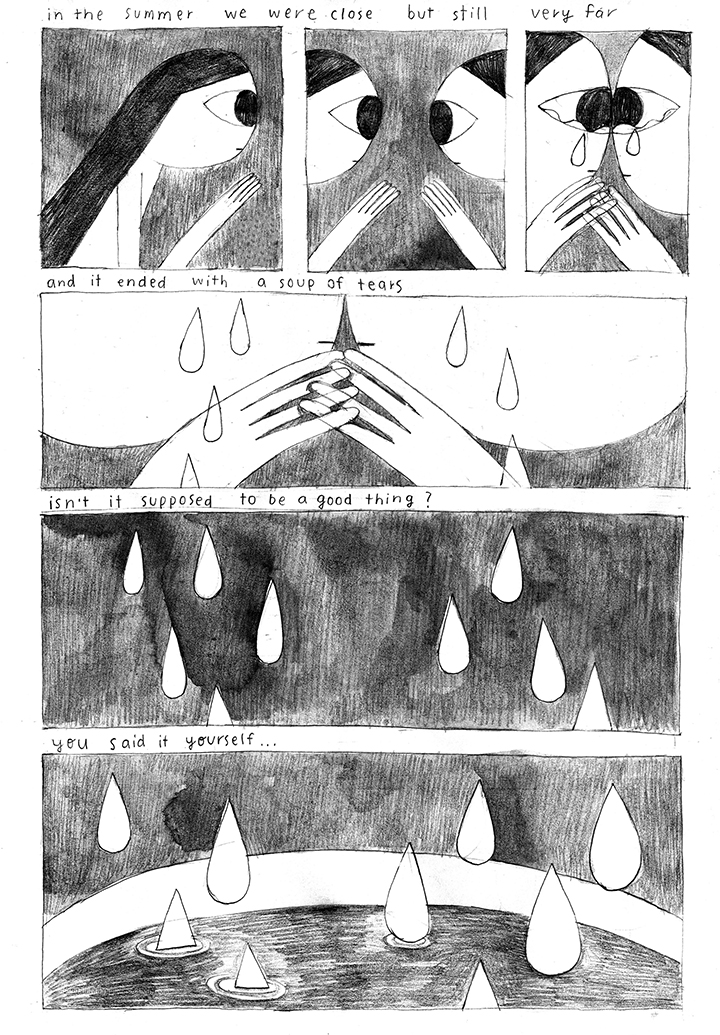 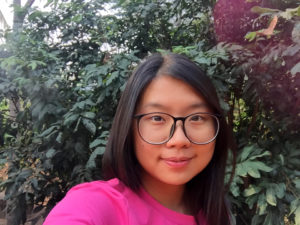 Hi, I’m Namsai. I’m a visual artist and illustrator from Chiangmai, Thailand. I like cinema, fiction, nature, good food, and nice people. Those things along with mundanity of life and human pain inspire my work. I also like to think of myself more as a creator and storyteller just to stay open to any inspiration.

I’m living in this little corner of Chiangmai called Phrao. I’ve just moved back here after a lot of traveling. Moving abroad had always been my teenage dreams. I thought I didn’t belong in my own town or country even, so I tried really hard to get out. I left home since I was 13. I’ve lived in Chiangmai City and Bangkok. I was an exchange student in the U.S. for a year. Then I spent 2 years in France for my studies. But it turns out that I feel a bit out of place everywhere I go. So I left France to settle in my hometown.
For me, this place is time, space, family, and comfort. I grew up here so it’ll always feel like home. Phrao isn’t really a ‘city’. We’re surrounded 360 degrees by mountains. There’s a lot of agriculture going on. Not a lot of young people and no art scene. Sometimes it’s good because I believe as a creative I need a good amount of boredom to fire up my imagination. There are also times that isolation is too much. Then I just have to travel to the city, see some friends, meet fellow artists, go around sketching, collecting new materials. That’s how I cope with it.

I like cinema, fiction, nature, good food, and nice people. Those things along with mundanity of life and human pain inspire my work.

As a creative, it’s the isolation. It’s both the best and worst thing. And in general, the best thing is the food and there isn’t much of a bad thing to say about it. Maybe the smog in summer.

During high school, I was inspired by a lot of artists and works in animation and that eventually led me to explore illustration, fine arts, and other things. I started off being resolute in pursuing an art career in the animation industry. I was self-taught for a couple of years after high school. Then I went to France to study animation filmmaking.
The first year I was in France, I was at a prépa in Paris. A prépa is a school that preps students for art school entrance exams. As a student there, I was given a lot of freedom to experiment and I had great mentors and feedbacks. Plus, being in Paris just exposed me to all the art and culture. I learned so much about myself as an artist, the different genres and nuances of art and more about the animation industry.
That year in Paris was pivotal for me. It sparked this horrifying idea of going on an independent artistic career path. I didn’t stick to it too much when it first came to mind. However, after my second year in France where I studied animation and did a couple of internships in animation studios, this idea became more and more vivid. Eventually, I had to accept the idea as something I truly want for myself.
Late 2019, I decided to leave school. And I’ve just settled down in Thailand as an independent artist and illustrator. It’s scary because most of the time I don’t exactly know what I’m doing as I only follow my gut. But that’s also what excites me at the moment, not knowing what to come and living life as my own person.

That’s also what excites me at the moment, not knowing what to come and living life as my own person.

Yes. My family is incredibly supportive. At first, they thought I was only doing it because it’s a ‘cool’ career. But then I proved myself with a lot of hard work. My friends have been nothing but encouraging.

I’m working mainly on illustration and painting at the moment but I’m also trying to come through with my animation film. So, hopefully, in a couple of years, I will debut as an animation filmmaker. Then I want to go back to Europe for residencies or maybe move to East Asia to explore the art scene there for a while.
And my ultimate dream, for now, is to found my own studio and illustration school here in Chiangmai. Maybe in 10 or 20 years? Let’s see what happens ^^

Hopefully, in a couple of years, I will debut as an animation filmmaker.

These days I’m so inspired by music and my current favorite artist is sogumm. She is a singer from South Korean. Her voice is like a dream and I love her writing. It’d be really cool to create visuals for her music.

I’m lucky to have always been surrounded by beautiful, independent and strong women since the day I was born. My mom has always been my inspiration. My best friends are all intelligent, capable young women. And throughout my education, I keep coming across amazing female mentors and artists who keep inspiring me.

I’m lucky to have always been surrounded by beautiful, independent and strong women since the day I was born.

When I was in middle school I was amazed by this book called ‘The Negotiable Fact’ by Narissara Pianwimungsa. I can still feel the influence it has on my present work. I also love the work from comic artist, Munin; illustrators, Pattarida Prasarnthong, Tongkarn and writer, Chamaiporn Sangkrajang. And when I was in high school, I came to know of an alumna from my school, Fawn Veerasunthorn, who works as a story artist at Disney. Her story made me realize I could achieve incredible things, too.

I think in any field of work there’ll always be a risk of running into people that judge my work or even me as a person based on my being a woman. And in the professional world, it’s often viewed as being less competent and resilient.
Women tend to be more feminine but that doesn’t mean we don’t have masculinity. Some people just don’t realize that it’s not about gender or sexuality at all. So far I haven’t personally come across any difficulty in my career but somehow I’m very aware of this.

Those who say you can’t make it are wrong.

Keep a sketchbook and a journal.
Draw a lot (like A LOT, a lot).
Time alone with yourself is essential.
Don’t be afraid to reach out to people.
Those who say you can’t make it are wrong.