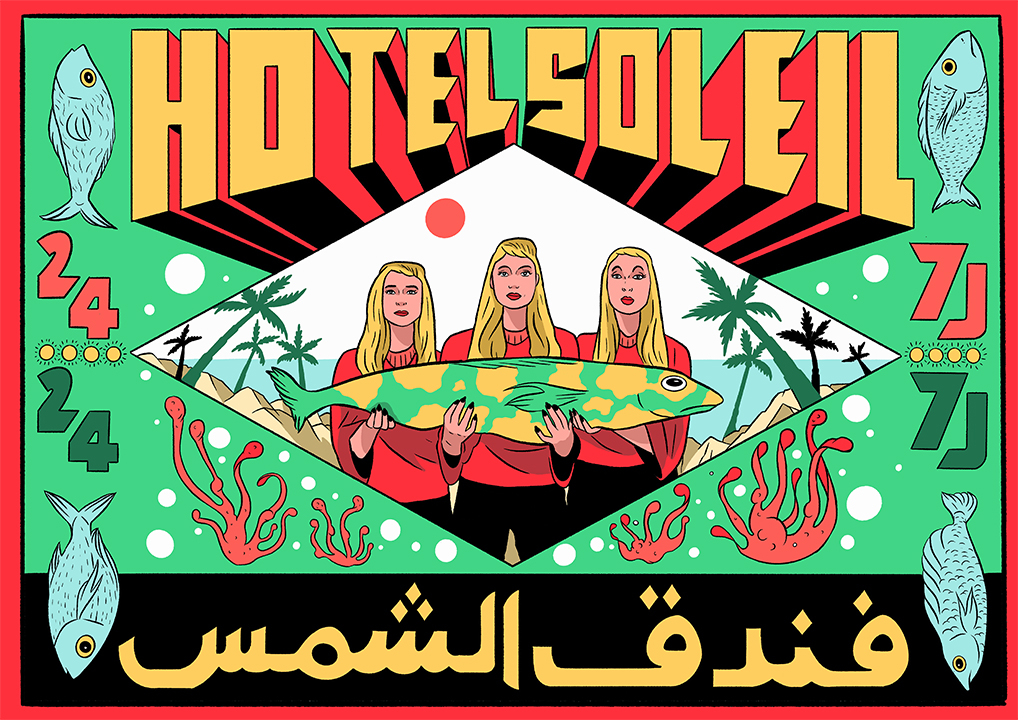 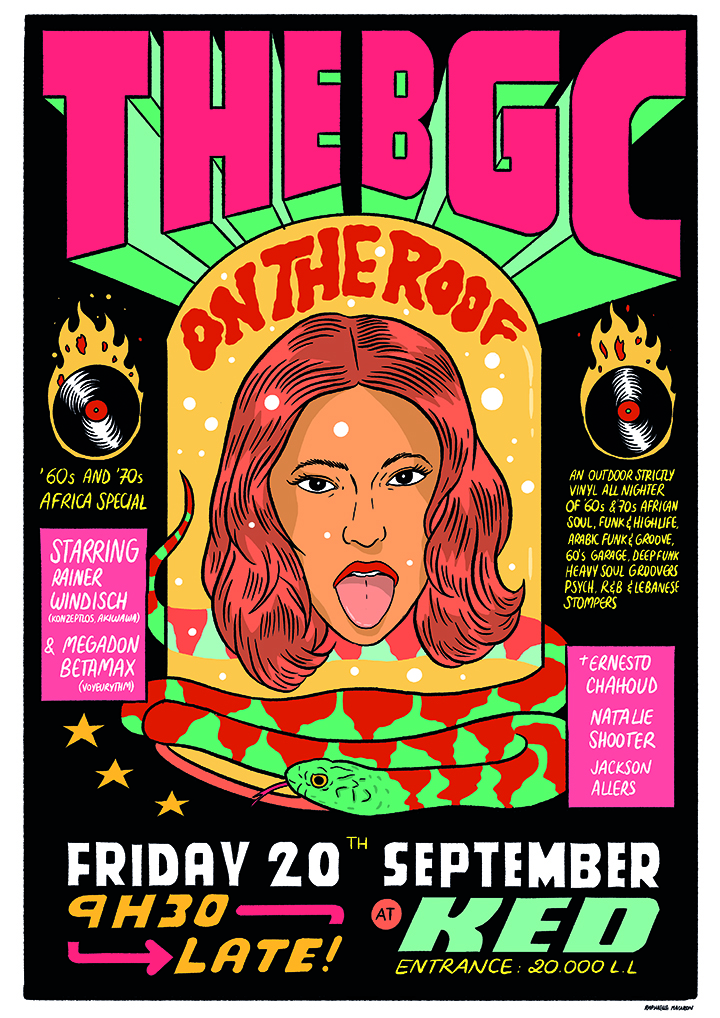 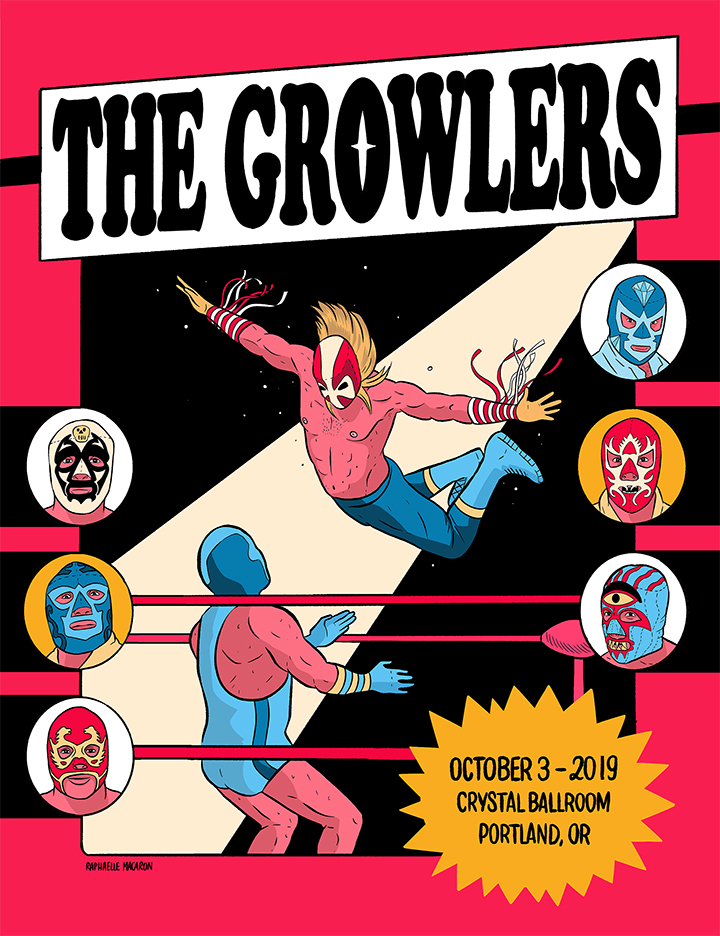 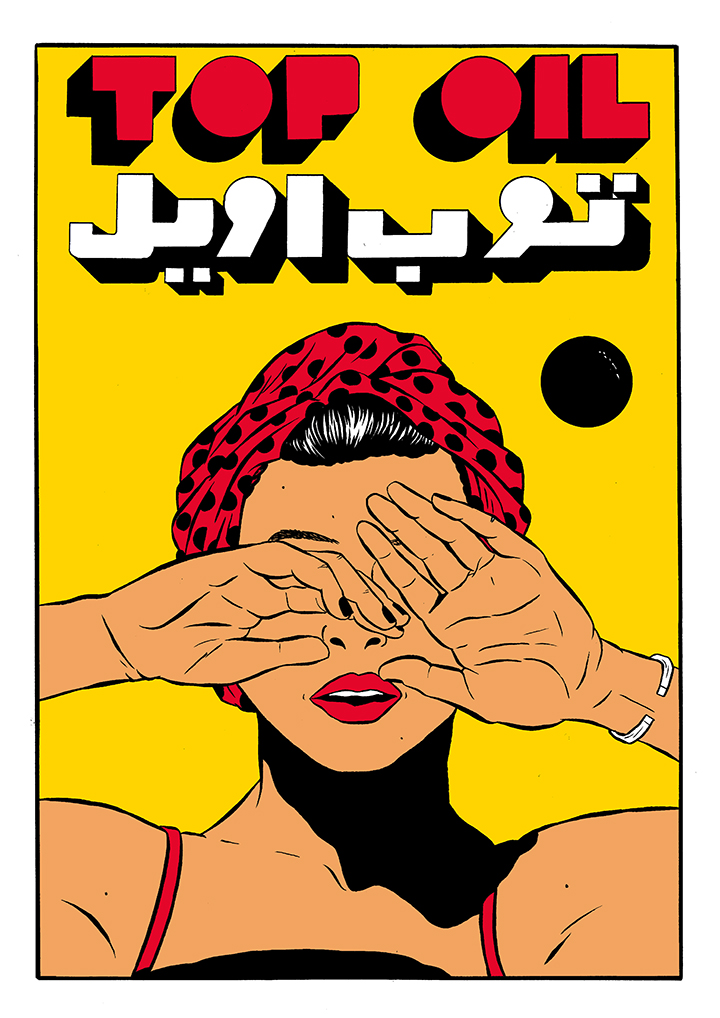 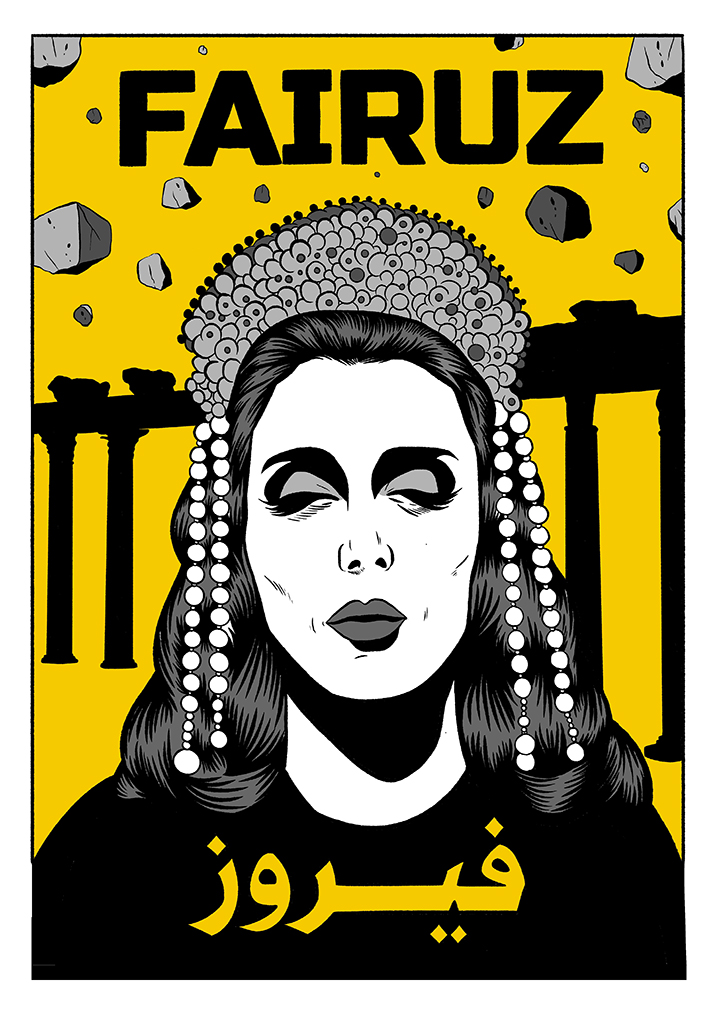 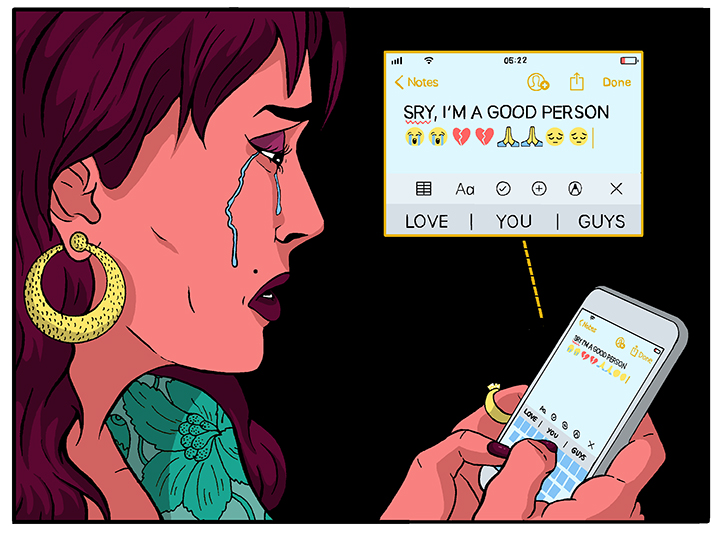 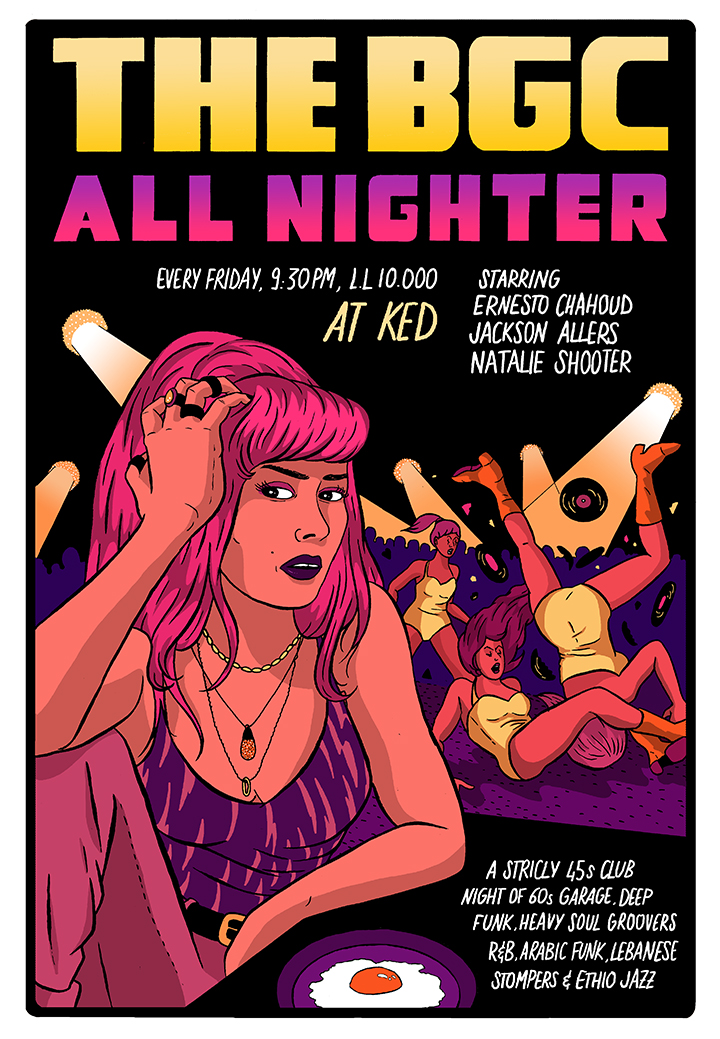 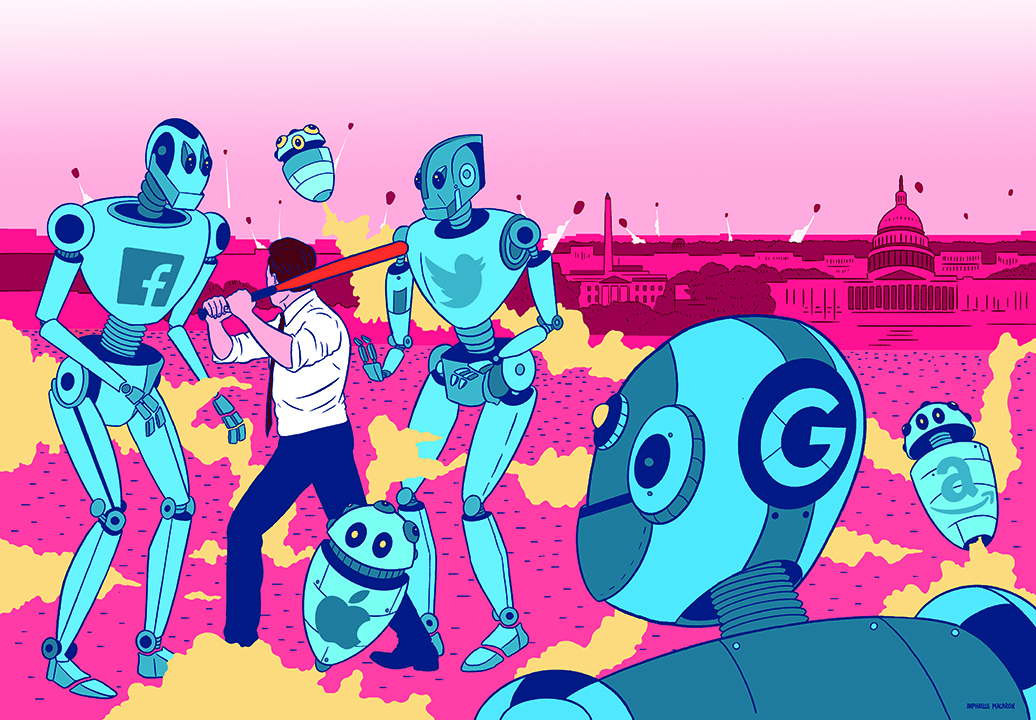 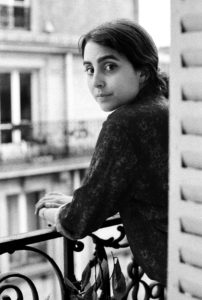 I am a 29-year-old illustrator, living and working between Paris and Beirut.

I was born in Lebanon, grew up and went to school in Beirut, where I had an MA degree in Illustration & Comics. I am also a member of Samandal Comics, a Lebanese collective publishing comics of Arab and International artists.

I am passionate about music, regularly attend gigs/concerts and collect records impulsively.

I am currently based in Paris, it’s such an inspiring city.

I work in an open-space workshop in the 10th district, which is also home to 10 extremely talented and renowned comic artists and illustrators. It’s a blessing to be surrounded by inspiring fellow artists.

Paris is a culture-capital, so having access to so many museums, galleries, concerts, festivals, and fairs is central to my inspiration.

I am currently based in Paris, it’s such an inspiring city.

I guess the best would be what I said above, about having so much access to cultural events. I moved from Beirut to Paris about 4 years ago and I am still amazed at how many possibilities this city offers.

The worst would be how expensive it is. As a freelance artist, it’s not always easy to keep up with all the bills. It can also feel like a hostile city at first. I found this to be difficult to deal with when I had just moved and felt like I was taken in a super-hectic lifestyle that was stressful and sometimes demoralizing.

I eventually found my way around this by focusing on a healthy routine and surrounding myself with positive elements.

Drawing has been a part of my life ever since I can remember. Growing up, I never believed this could be a career (at least not in Lebanon) and I thought I’d settle for something close enough like advertising or design. When I started my studies in advertising, there was an option of specialising in illustration. This led to a BA in Illustration then to an MA in Comics. Even after that, I had no idea that I would end up living entirely from drawing. Today, this is one of my greatest blessings.

Growing up, I never believed this could be a career (at least not in Lebanon) and I thought I’d settle for something close enough like advertising or design.

Growing up, everybody around me, friends and family, knew I liked drawing. This was somehow encouraged as a hobby but not necessarily considered as a career option. When I decided to pursue studies in Arts, I was met with different reactions but at first, most of them were negative.

It was hard to explain to my surroundings that this could be an actual job and having to answer to questions like Will you make any money out of this or How will you support a family. In some way, I think these questions were legit and didn’t come from a lack of support but a lack of audience for it, a lack of job opportunities. This is a complicated step to go through as it is difficult to be 100% confident that you will be able to sell and sustain your art. Convincing others about your success and your ability becomes a way to convince yourself and this is a very long and painful process.

For the moment, I am focused on working on two graphic novels that I hope will be out in the coming years. Aside from my work in illustration, comics are a big part of my life. I love storytelling and for me, comics are the ultimate medium especially for tackling social and political issues. Recently, I’ve been feeling the urgent need to put my skills to good use: speaking out against sexism, racism, homophobia, social injustice and environmental issues. I would love to be able to work on projects with important social and environmental impact.

I would also like to expand my collaborations with musicians and/or labels. This is currently a significant part of my illustration practice, and these are the projects I enjoy the most. Working with musicians is a healthy way to reconcile with the fact that I am not a rock star myself.

In the future, I aim to find a balance between commissions and personal work. As a freelance artist, this is extremely important to achieve.

Recently, I’ve been feeling the urgent need to put my skills to good use: speaking out against sexism, racism, homophobia, social injustice and environmental issues. I would love to be able to work on projects with important social and environmental impact.

That’s a tough one. I guess I’d go for a musician I admire, but picking one is almost impossible. I can name artists like Tyler The Creator for instance, as his musical universe is filled with visual references, storytelling and very bold concepts.

He also has a fashion brand and recently made an ice cream brand, so collaborating with him would definitely be full of surprises! Plus, I’m a huge fan of his music.

I’ve been very inspired by the Hip-hop/Rap universe so working with any of the artists I listen to regularly would be such an exciting opportunity.

Smart, determined and unapologetic. My mother has taught me to always be consistent with my values and principles, in a very pragmatic way. When in doubt, I often think of how she would handle a situation. She was always very supportive of my passion for art and she is incredibly caring.

My sister is a neurologist and happens to be one of the strongest women I know. She’s immensely determined, hard-working and has an amazing ability to adapt and learn. She’s rocking a male dominated field, and won’t let anything get in her way.

My aunt is also an artist and she’s been an inspiration since day 1.

Growing up, the only creative around me was my aunt. Ever since I was a child she was very invested in our creative education. She would go out of her way to organise arts and crafts activities and these moments spent with her were defining to me.

She taught me how to draw, paint and carve; I would always leave her house with my hands dirty and my mind filled with ideas. The first time I conceptualised the idea of pursuing a career in the Art, it was simply in the terms of “I will be just like her”. But even then, I thought I wasn’t as talented as her. I still think so!

Yes, but I feel they are common to many industries. It is mostly the feeling of sometimes not being taken seriously, or “being part of a female quota”. Even though it’s not easy, I try not to be affected by these things anymore.

I believe in my work and my identity as an Arab woman is my source of inspiration in many projects I’ve worked on and is now one of my greatest strength.

I’ve been given the chance of working with a medium that makes me speak out against misogyny and empowers me.

I believe in my work and my identity as an Arab woman is my source of inspiration in many projects I’ve worked on and is now one of my greatest strength.

I suppose I’d say stick to your guts. I’m far from being a mentor to anyone, but one thing I know for sure is I’m damn well happy I didn’t listen to the people saying I couldn’t make a job out of my passion.