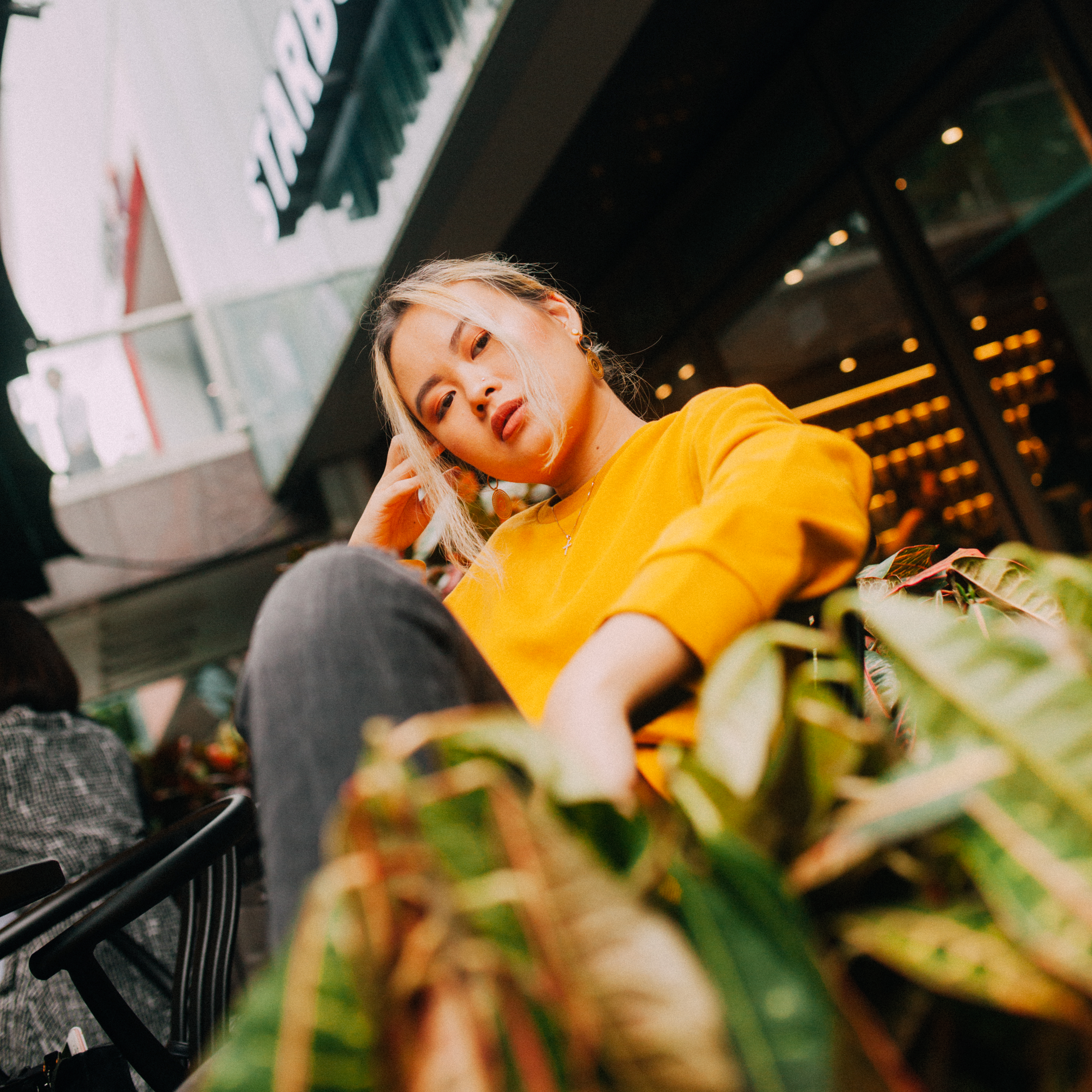 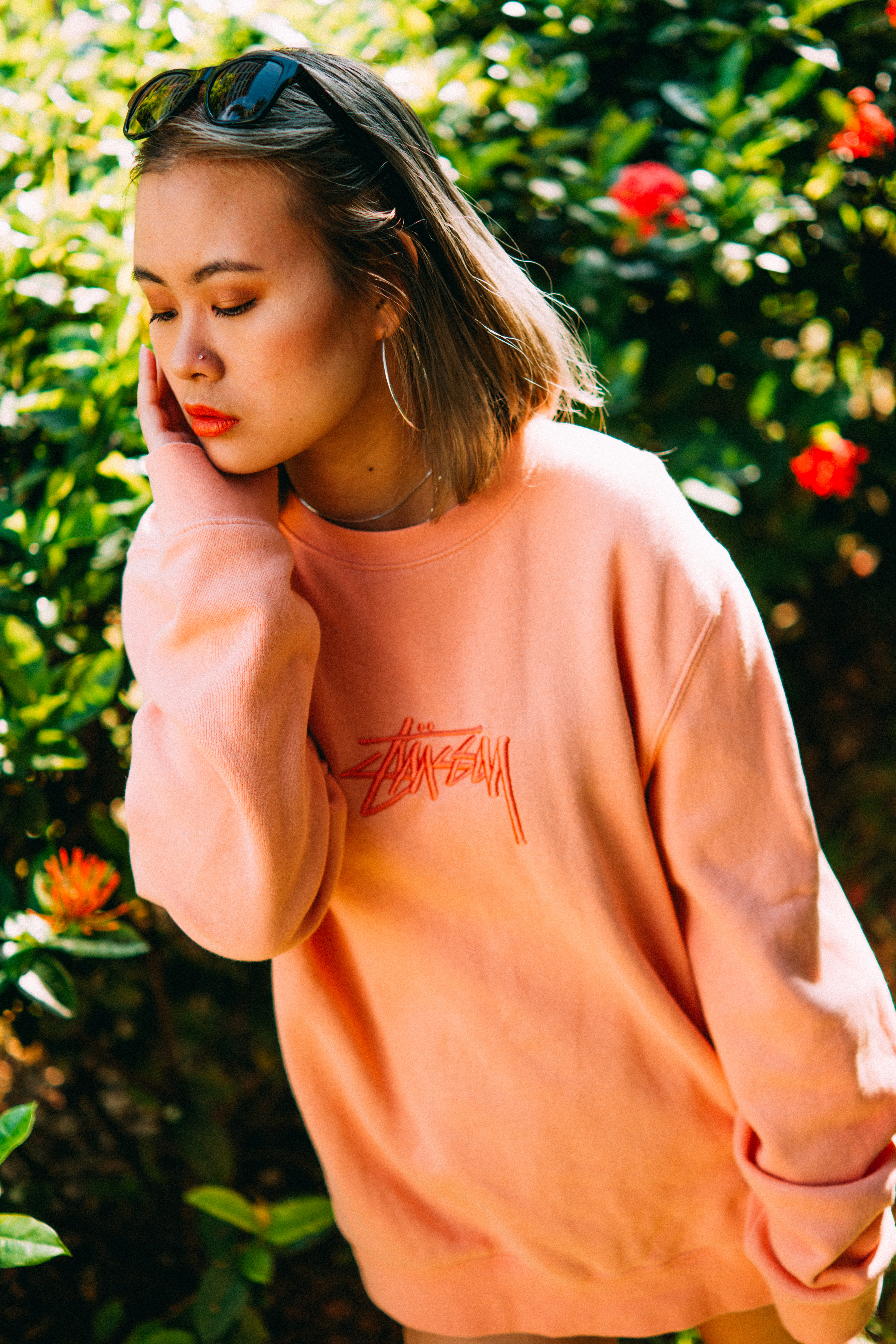 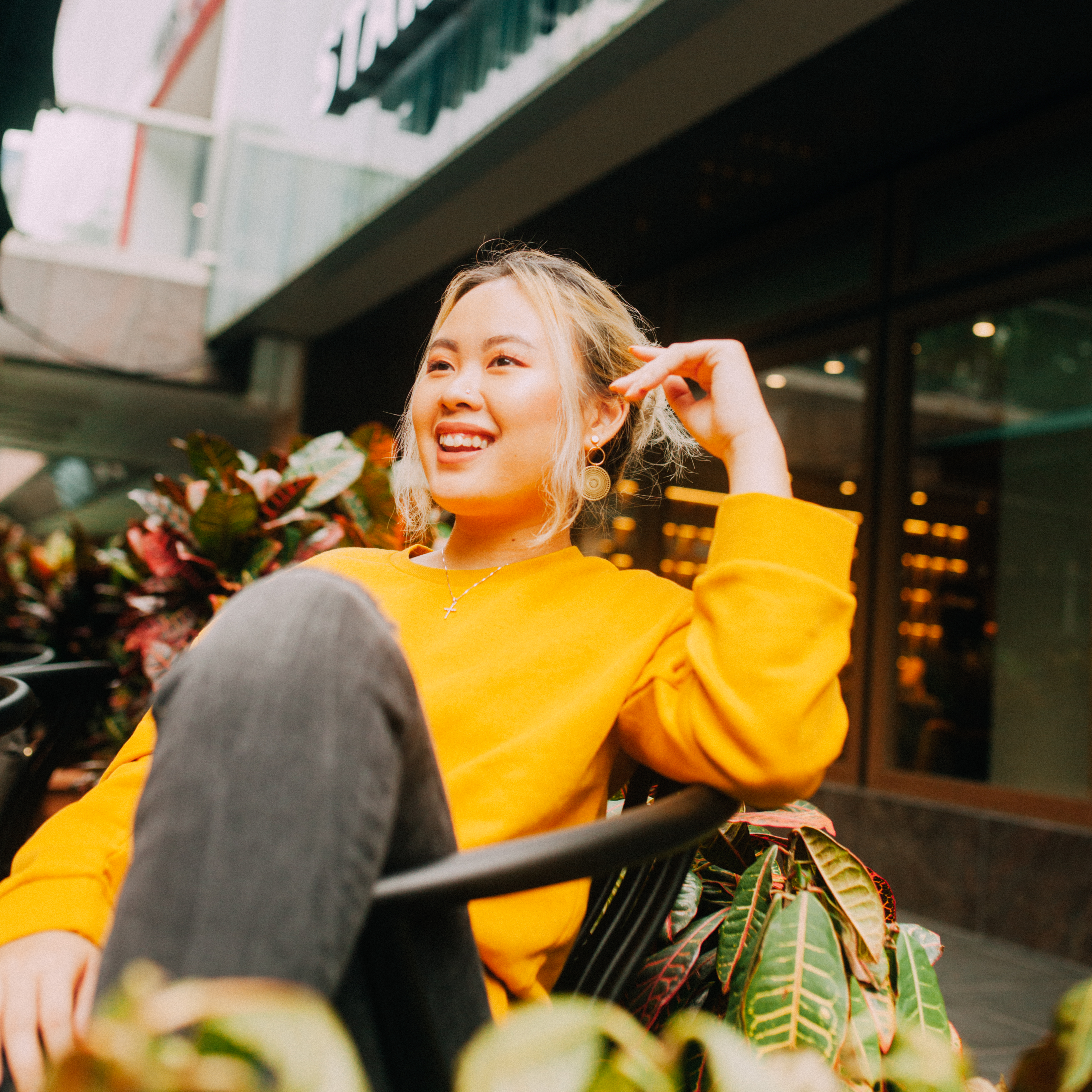 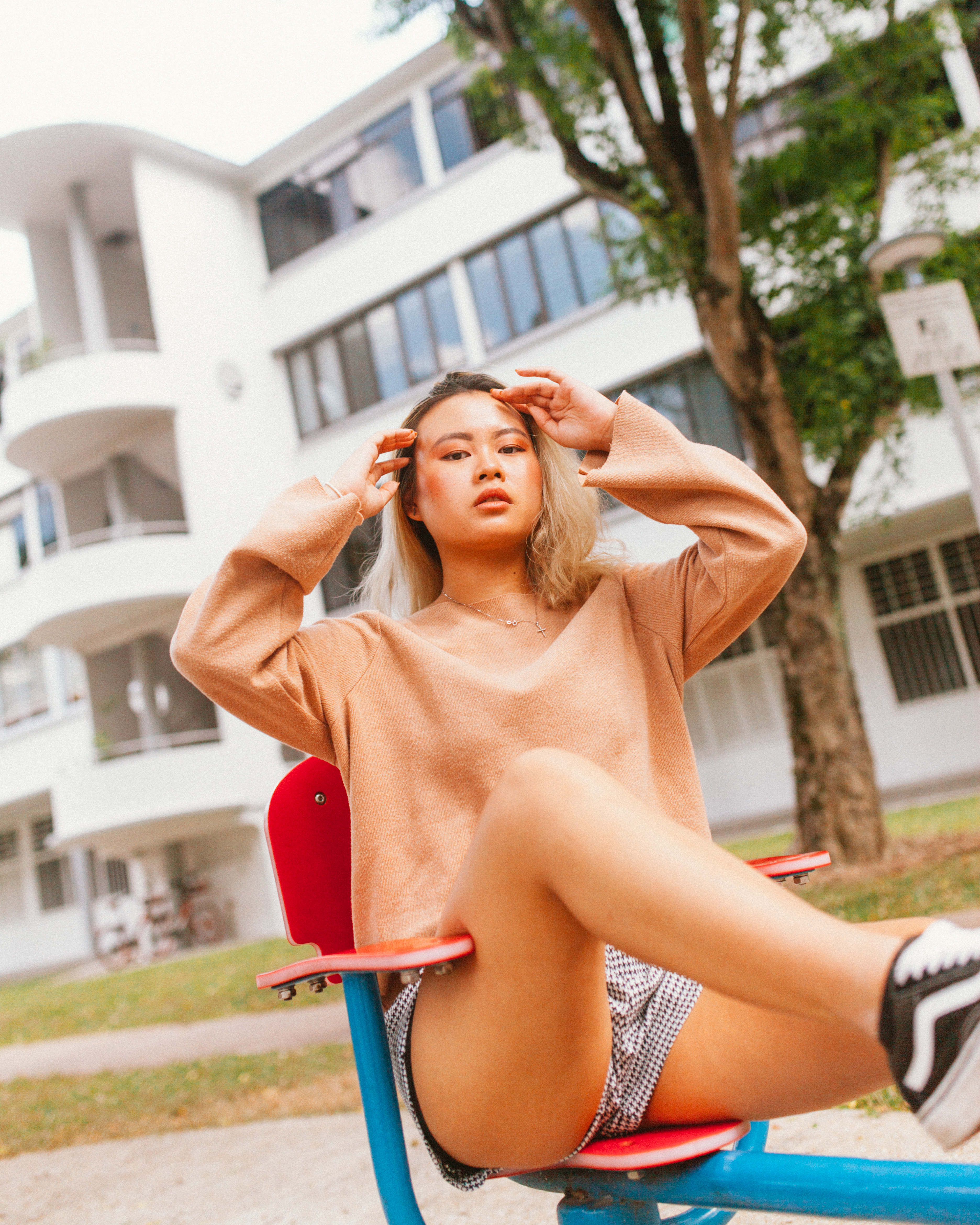 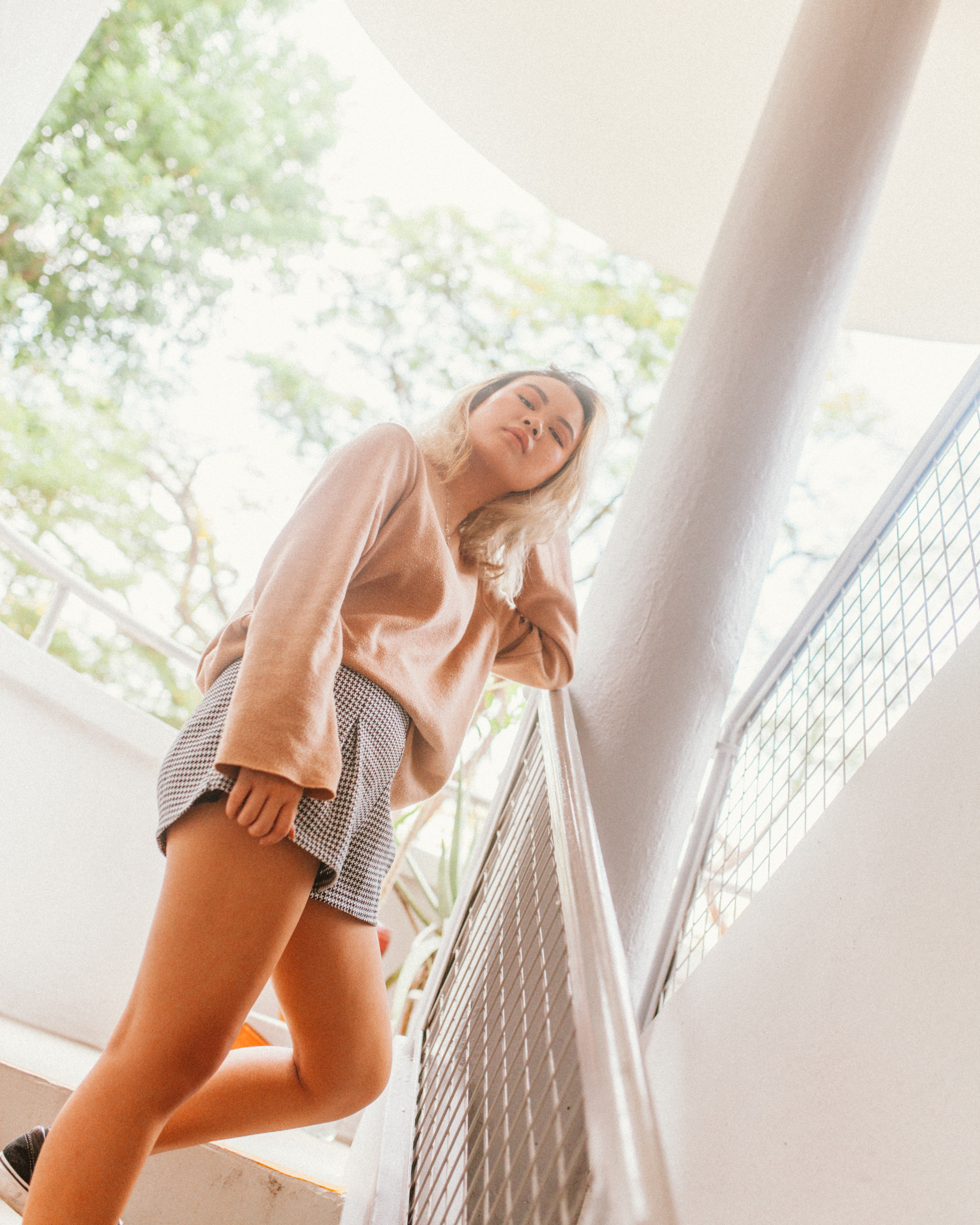 I’m a 22-year-old full-time singer-songwriter based in Singapore. I’ve wanted to be a singer since I was 5 and I think I fell in love with writing because it was the perfect way for me to put everything I felt that I couldn’t articulate into a single, immortalized moment.

I grew up in a very straight-cut, by-the-books type of city, which was really frustrating for me because I could never be compelled to fit into what was laid out for me. But I think growing up in a small city like Singapore brought a lot of opportunities; from being able to pick up instruments and get opportunities to sing — all these pushed me into doing music eventually. I think the intensity of the Singapore lifestyle can create this numbing effect, but it builds up a sort of tension in all of us that makes us look for art in our own way.

I think the intensity of the Singapore lifestyle can create this numbing effect, but it builds up a sort of tension in all of us that makes us look for art in our own way.

I remember taking a shower when I was five and telling my mom that I wanted to be a singer. When I was 16 I started writing songs and opening up to opportunities like Noise Singapore (2014) and Baybeats (2015). I met a lot of really key people who invested in me and believed in me. That made the release of my first single, Lines, possible when I was 18 years old; if not for that release nothing would have tied me to the industry and brought me back in 2017 when I, at the time, had already accepted a full-time job at a Public Relations agency. Lines was so significant because the story it told continued to follow me and I continued to get personal messages about the song for years after its release. That kept music in my heart and mind as something I would want to return to. In 2017 I decided I had written another song I really wanted to share with other people. I began working on bringing it to the finish line on top of working my full-time job. It became such a good outlet that the passion it started to generate far exceeded what I was feeling at my full-time job. Over the course of the next year, I met my manager and producer Flightsch and that brought me into momentum and under a label that gave me the confidence to take my music further. By February of 2018, I had tendered my resignation letter and decided to move into music full-time as a career. It was and is the scariest decision I have ever made because most days I feel like I’m driving blind and some days I feel like I’m not even driving/moving at all. But I think the feeling of “this is where I should be” far outweighs the fear of not knowing exactly where this “where” is.

I think the feeling of “this is where I should be” far outweighs the fear of not knowing exactly where this “where” is.

Every key person in my life has supported me from as far back as I can remember. My mom encouraged every musical endeavor I had and gave me all the opportunities she could find. My dad told me when I was 16 that if I wanted to stop studying after my O’levels to pursue being an artist I should go for it. (I should also mention that whenever he introduces me nowadays he just Googles me on his phone and shows people the landing search page, haha — it truly is the unspoken act of love that says the most). Key people in the industry also really gave me the support I needed to find confidence in my creativity; from Leonard Soosay to Evanturetime and Flightsch, people have consistently supported and invested in me. The support I feel has been both from the people surrounding me at home and from people in Singapore’s creative space. I wouldn’t be where I am now without it.

I want to create music freely and honestly. I’ve always hated pandering to anyone or anything; quitting my job was a step closer to that artistic freedom so now I’m really searching for it and digging deep to find what I truly, deeply want to build and figure out how to fortify that in my craft. Through creating honestly and freely, I’ve also always hoped to show people from Singapore that there is no one best route for success and that there is no one mold that we should have to be accountable to. Growing up I absolutely hated being told by the education system, teachers, or seniors that I had no choice or say in which road I took if I wanted to succeed. Call me stubborn but the most important thing to me was to give my life to something I wanted on my terms. It obviously isn’t a utopia in this world, but fighting for freedoms — whether artistically, academically, or in whatever area — is something I truly believe is needed to empower people to dream (and therefore live) larger. I’ve never believed in telling people to do things one type of way just because it’s prevailing. The ceiling of our generation should be the floor for the next. This can only be done when we allow them to venture where we haven’t.

Growing up I absolutely hated being told by the education system, teachers, or seniors that I had no choice or say in which road I took if I wanted to succeed. Call me stubborn but the most important thing to me was to give my life to something I wanted on my terms.

Childish Gambino. When he delivers any work of art (from acting to singing), it always seems like such a visceral experience for him. He seems so absolutely consumed by what he’s trying to create and deliver and I somehow think being able to be part of that creative experience will be game-changing for me.

The greatest measure of a woman to me is my mother. She is relentless love, unwavering grace, selflessness, and quiet strength. I struggle to be half the woman she is, but she inspires all the good in me. In this industry, the women around me are so diverse, but I think a common quality I see is this determination and drive that cannot be put out. At the end of the day, I believe the hierarchy of competence has a place to prevail in any industry and women who persist have and will move and shake history to rewrite the next chapters. We must insist.

There weren’t any because I never got to know of any local creative growing up, but all that is changing and I think our city is beginning to recognize its own. Hopefully, the generation to come will have a different answer.

I think there’s less leeway in escaping the superficial conventions imposed on us and those become very intricately tied to our success. We are assessed on so much more than competence — there are so many peripheral assessments made of women that come into play with regards to their ability to succeed. From the way we look to even having to account for how dominant we should be before we cross the line of inspiring to off-putting. These things shouldn’t come into play but there are too many conventions about women built and idealized over time that we have to work against. I will say that it’s in a much better place than it was and I’m more hopeful than I’ve been that this is something we can change.

Always let your work speak for itself so give everything you have to that.

Always let your work speak for itself so give everything you have to that. Don’t give in to the peripheral, don’t give in to playing a role or upholding an image just because it’s palatable/prevalent, and don’t ever believe that you have to do any of those things to succeed. Do it if you want to and on your own terms. The work will speak for itself.