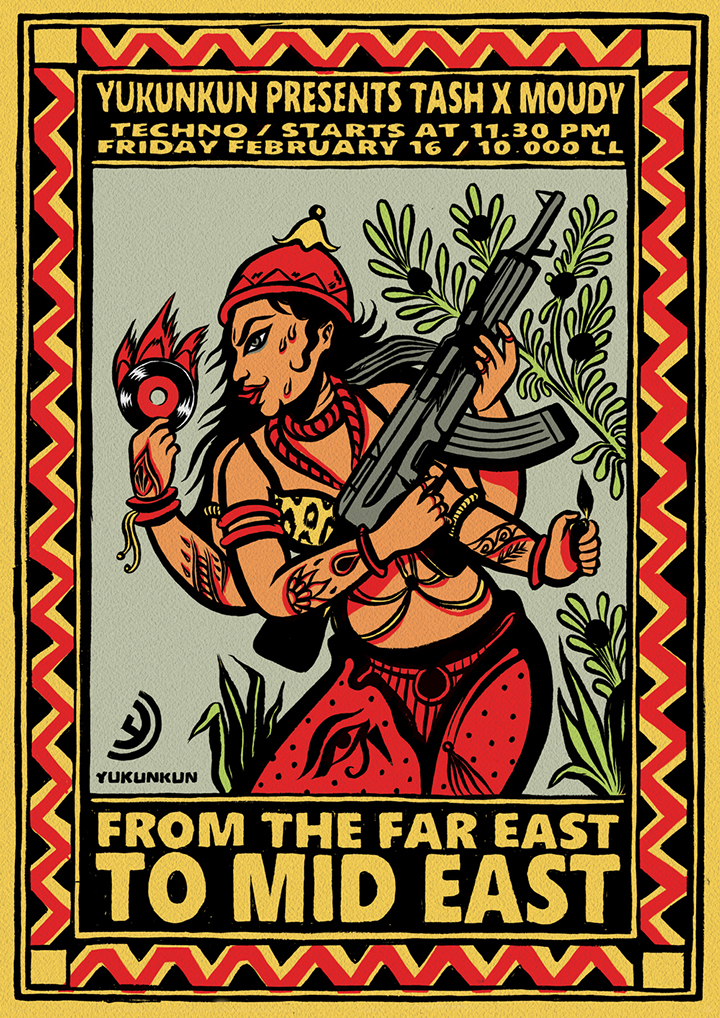 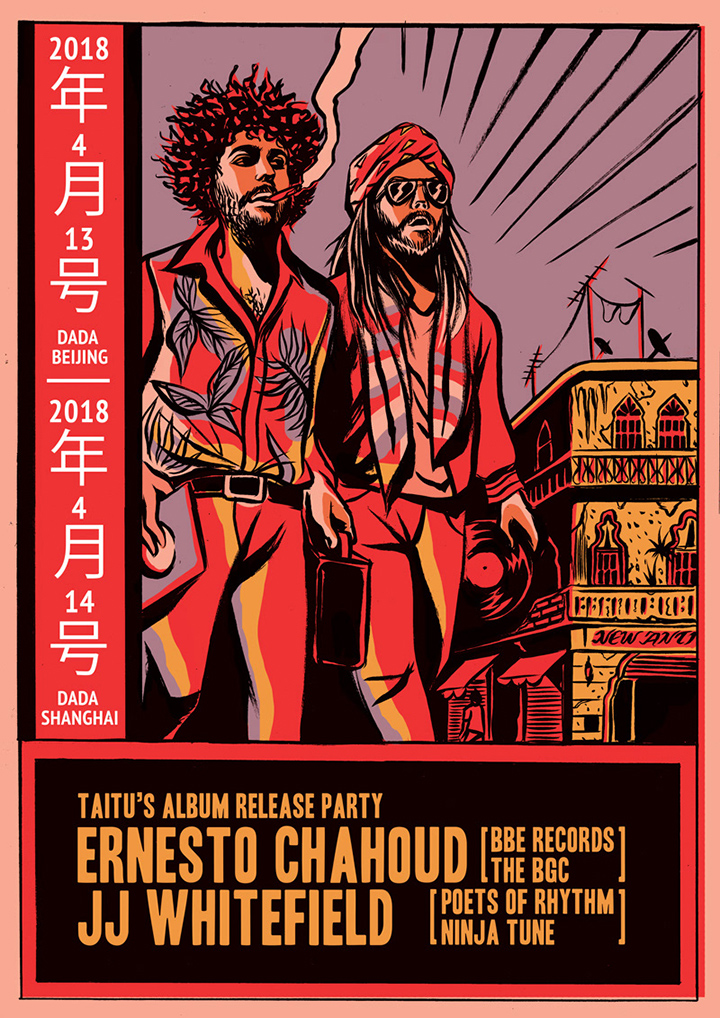 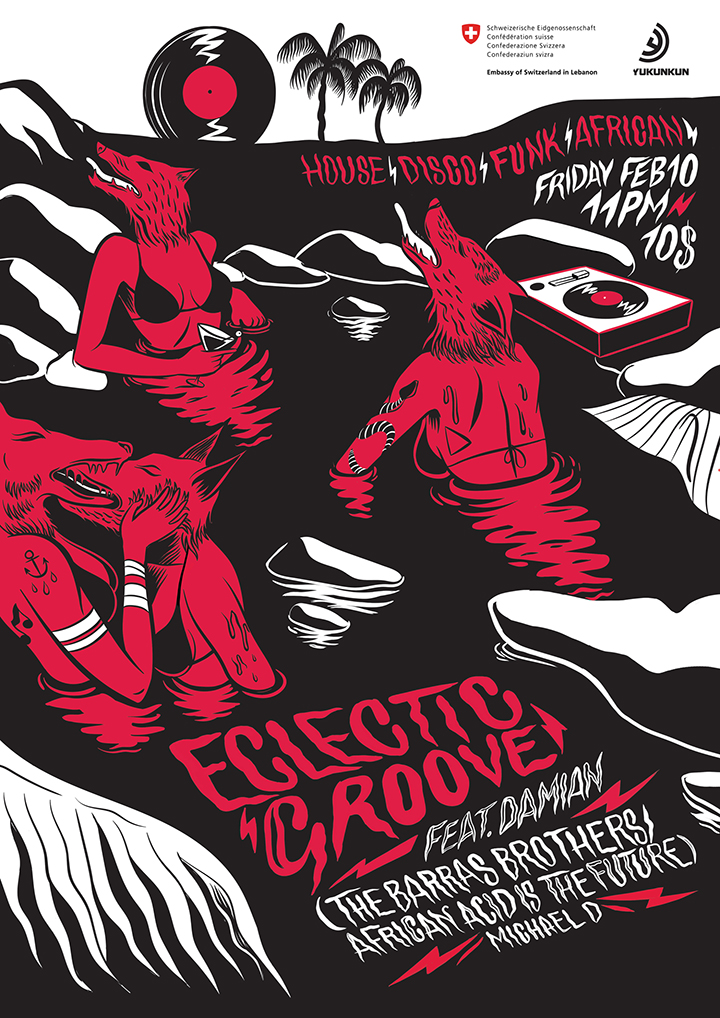 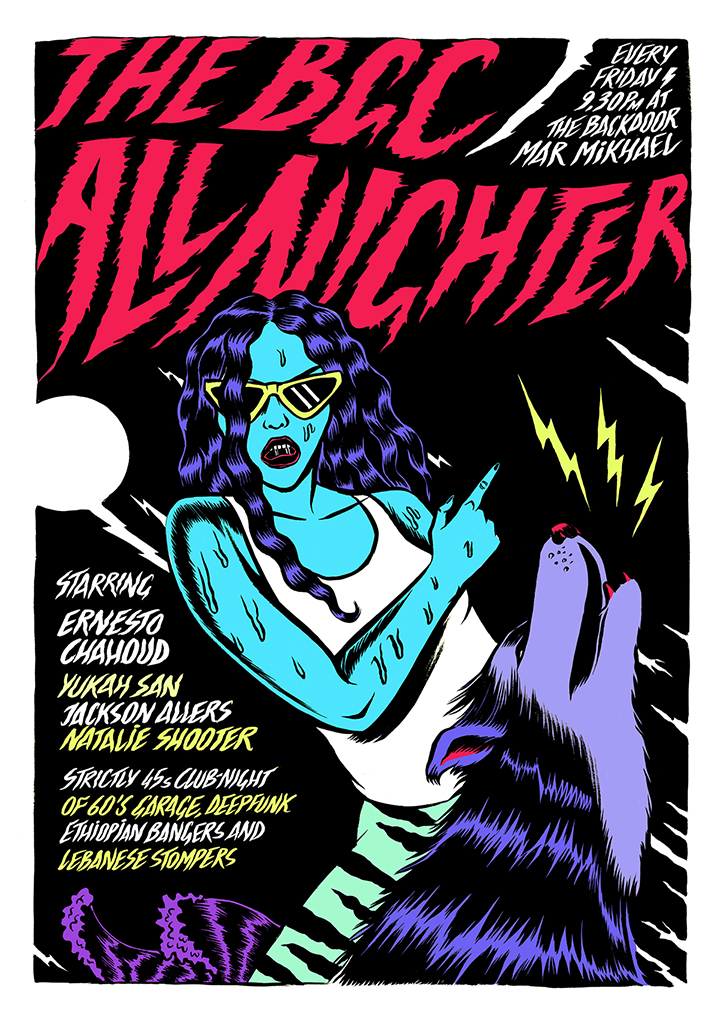 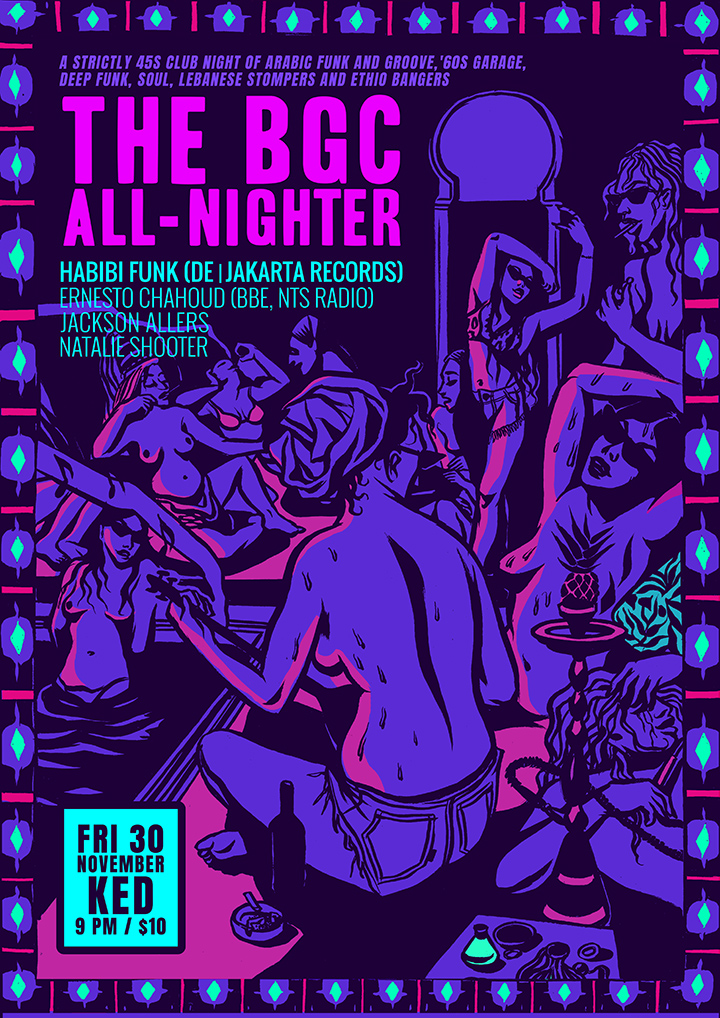 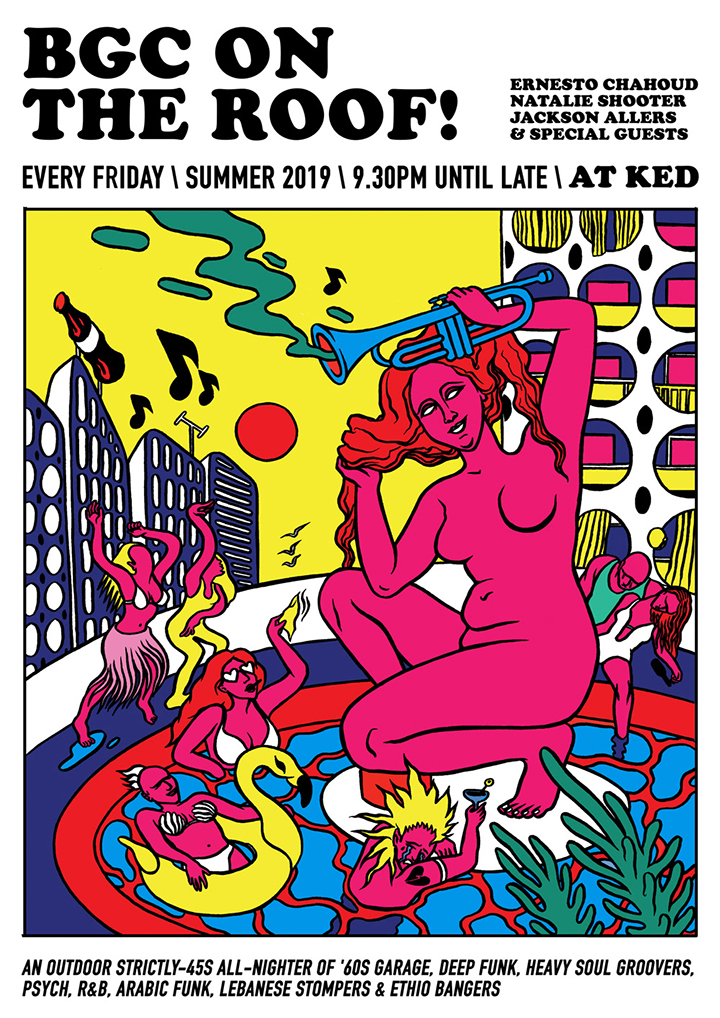 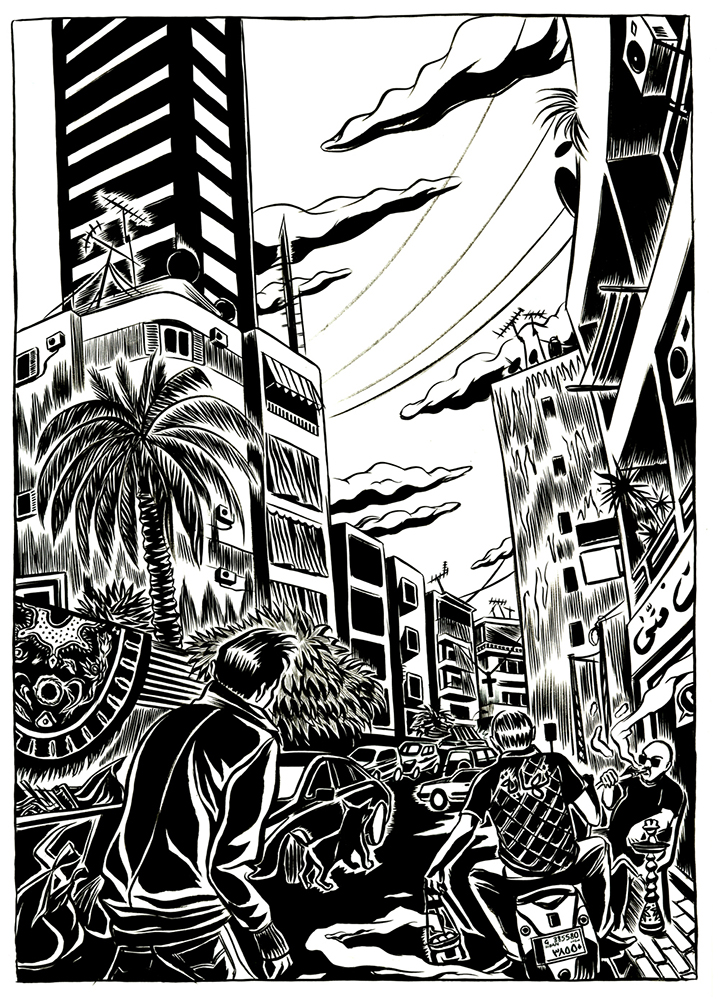 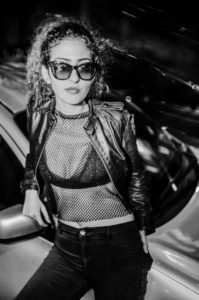 I’m Tracy, a 27-year-old comic book author and illustrator from Lebanon. My horoscope is Leo and my hair is very hard to brush. I grew up between Lebanon and Cyprus, in a very multicultural environment. Drawing is therapeutic to me, my therapist forces me to write my experiences in comics every time I see him as if I didn’t have enough work.

I like to have fun, to do and create things, to listen to music while I drive, and to experience new things all the time. I’m famous for being a big drinker here in Beirut. Other than that I’ve published a comic book called “Beirut Bloody Beirut” and a bunch of other shorter comics, in France and in Lebanon. Chaotic urban stories, dark humor and cool girls with sunglasses are a big part of my work.

Just read my book, it’s dedicated to that! I’d say it’s a very dense city with a very particular, restless energy. It’s my favorite city to draw cause it’s really punk visually. The urban planning or lack of it makes it look like some kind of wild jungle of buildings that don’t make any sense. A totally experimental city, that’s not even trying to be. A lot of different communities cohabitate in it, which makes it a very rich and interesting place to be in.

Beirut is really like an ongoing theatre, there’s always chaotic shit going on.

Beirut is really like an ongoing theatre, there’s always chaotic shit going on. For someone that likes telling stories, it’s very stimulating. But the same chaotic shit can also be draining. There’s a lot of misery and violence concentrated in the same space.

I always liked drawing, then I took up serious art classes in Cyprus when I was around twelve, copying stuff from masters and shit. Funny, there’s no way I would have the patience to do that now. After school, I had the choice to study mural painting in Moscow, but it seemed like a lot of work, so I chose comics and illustration instead, in Beirut. Fuck, why did I do that? Anyway, I was drawn to comics because it seemed like the most rich and generous form of art to me these days. I started freelancing by doing posters for almost nothing. Then I did a book for my final master’s project, which was later published in France. I got involved in illustration by making a lot of posters for local venues since then I’m very active in illustrating music-related projects. I also co-founded an alternative comics collective called “zeez”, and recently joined the excellent, restless alternative comics collective “Samandal”. Thanks to that, I’m still learning a lot of things.

I was drawn to comics because it seemed like the most rich and generous form of art to me these days.

My family was definitely very supportive, what’s funny is that my parents used to dream that I would become a comic artist and I was like no fucking way, there’s no money in that. They’re both writers/literature translators/journalists so they’re obviously passionate about that stuff. They’re usually more enthusiastic than me about what I do. I really enjoy exchanging ideas and discussing things with them.

What I like about freelancing and being in alternative comics collectives is that it’s always an adventure. I don’t have any specific goals because everything’s always so interesting to work on.

This year, I’ve done visuals for many musicians: a young rapper in Idlib, DJs in Hong Kong, one of my favorite singers, Rachid Taha, an Arab all-female rock band, etc.

I’ve tried journalistic comics, graphic recording for secret feminist activist forums, experimental zines, live drawing for concerts, working as an editor for a comics magazine, etc. I like the idea of being some kind of auto stopper when it comes to work: I just want someone to take me on an unexpected ride.

It’s always so interesting that I don’t even have the time to think of future stuff. But sometimes I do feel like I should stop a bit and just do one big project, cause it can be very tiring. I have a residency in Angouleme coming up in March, so I will probably be working on a new book there. I have three main script ideas and book projects that I’ve already started, so we’ll see how it goes. I think I do have one ambition maybe: to capture and document, even in a fictional way, something contemporary, inspired by where I’m living now.

I think I do have one ambition maybe: to capture and document, even in a fictional way, something contemporary, inspired by where I’m living now.

I don’t know who particularly but I would love to find the kind of fusional relationship that some writers/illustrators had, like for instance Hunter S. Thompson and Ralph Steadman, or Sampayo and Muñoz. Most of the writers that I love are dead, but it will come, eventually.

Very strong, loving, hard-working, passionate, creative, interesting and funny, I could go on forever with their qualities. I’m so impressed with my girlfriends, colleagues, and the women in my family. My mum went through a traumatic childhood during the civil war, and kept on pursuing her passion for translating literature, worked her ass off to give us the best life she could, she’s just pure love and strength. And I’m in love with all my girlfriends; they all have very interesting lives.

Drives me crazy that we still live in this absurdity called the patriarchy when I think of all the shit women can carry on their shoulders.

Very strong, loving, hard-working, passionate, creative, interesting and funny, I could go on forever with their qualities.

Not really anyone local, unfortunately, because most of the good stuff that was going on was pretty underground. The mainstream culture in Lebanon was so bad and projected a strange, unrelatable image of women. I really liked Peaches and Amy Winehouse as a teenager, because when I discovered them when I was around thirteen, I found them so cool and transgressive. But for local female artists, I had to wait until I came back to Lebanon, around 19, to discover what was going on in the alternative scene.

Personally I haven’t faced any, on the contrary, maybe because women have played a big role in my career. Michèle Standjofski, my teacher at art school brought me to such a fulfilling place in my practice, and my publishers in France, Hélène and Sophie, were very good to work with.

No one I’ve ever worked with has ever discriminated me for that, quite the opposite. I get encouraging messages from both men and women.

We’re at a great time now where women are gaining a lot of importance in the comics industry. Stories that are being told are much more varied than before when it was mostly just geeky men.

Just be real, be funny, annoying, or whatever, don’t take yourself too seriously.

I think it’s better to give one-on-one advice, but in general, I think you should follow your guts and do projects you love, even if you’re struggling to meet ends and stuff. It will pay off. For instance, when I was just starting to freelance I was committed to doing these underground venue posters for almost nothing.

But I loved doing them and later on, I won a prize that involved a good amount of money and comforted me in the idea that I shouldn’t listen to anyone and do whatever I feel like.

Being an illustrator is probably one of the worst jobs if you compare the amount of work with what it’s paid. I can’t believe the amount of hype, boring designers who make some pretentious/ empty collages and get paid 10 times the rate we get. Don’t become one of these, please.

Other than that, I think it’s important to back off a bit from your references and find your own voice, your own stories, characters, etc. and not try to imitate something that exists too much already. Stop trying to do things that are necessarily pleasing and very finely drawn, except if you’re a virtuoso or something, then you can do whatever you like. But most of the time when you’re just looking to please or impress it’s boring. I’m tryna sound wise but I probably still do all of the latter, ahah.

But anyway, Just be real, be funny, annoying, or whatever, don’t take yourself too seriously.