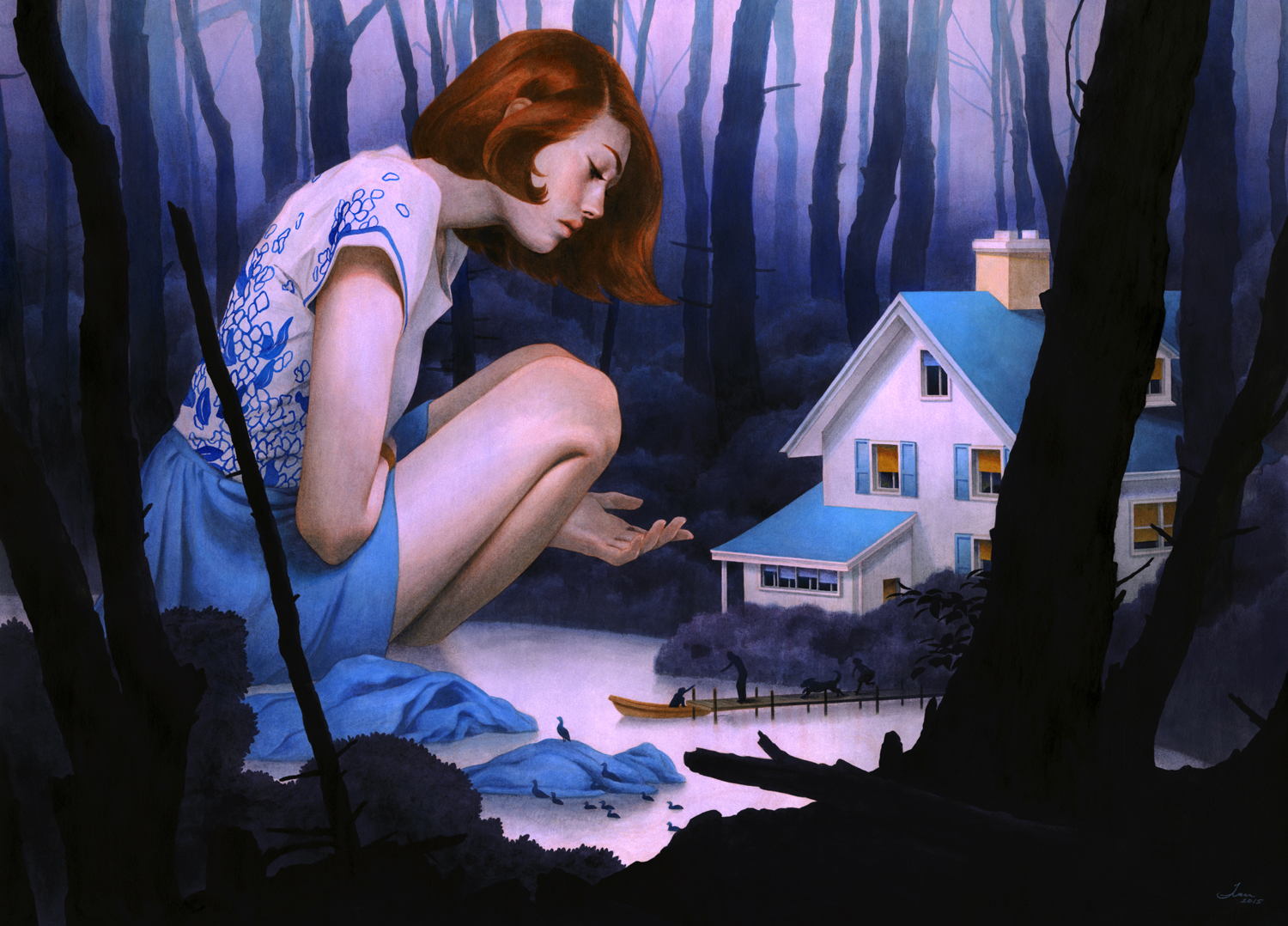 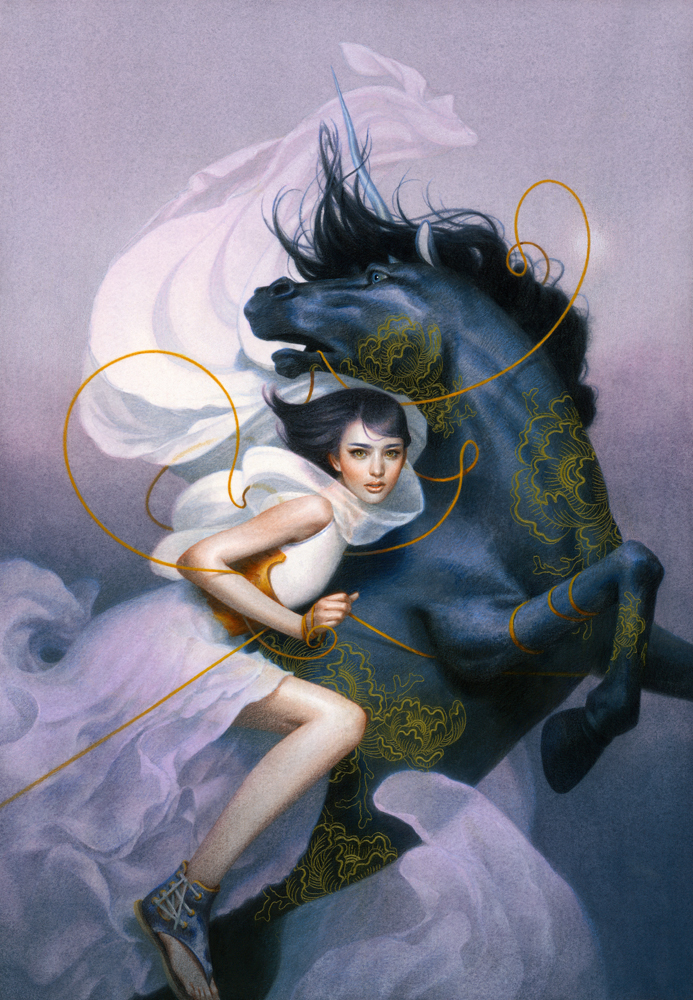 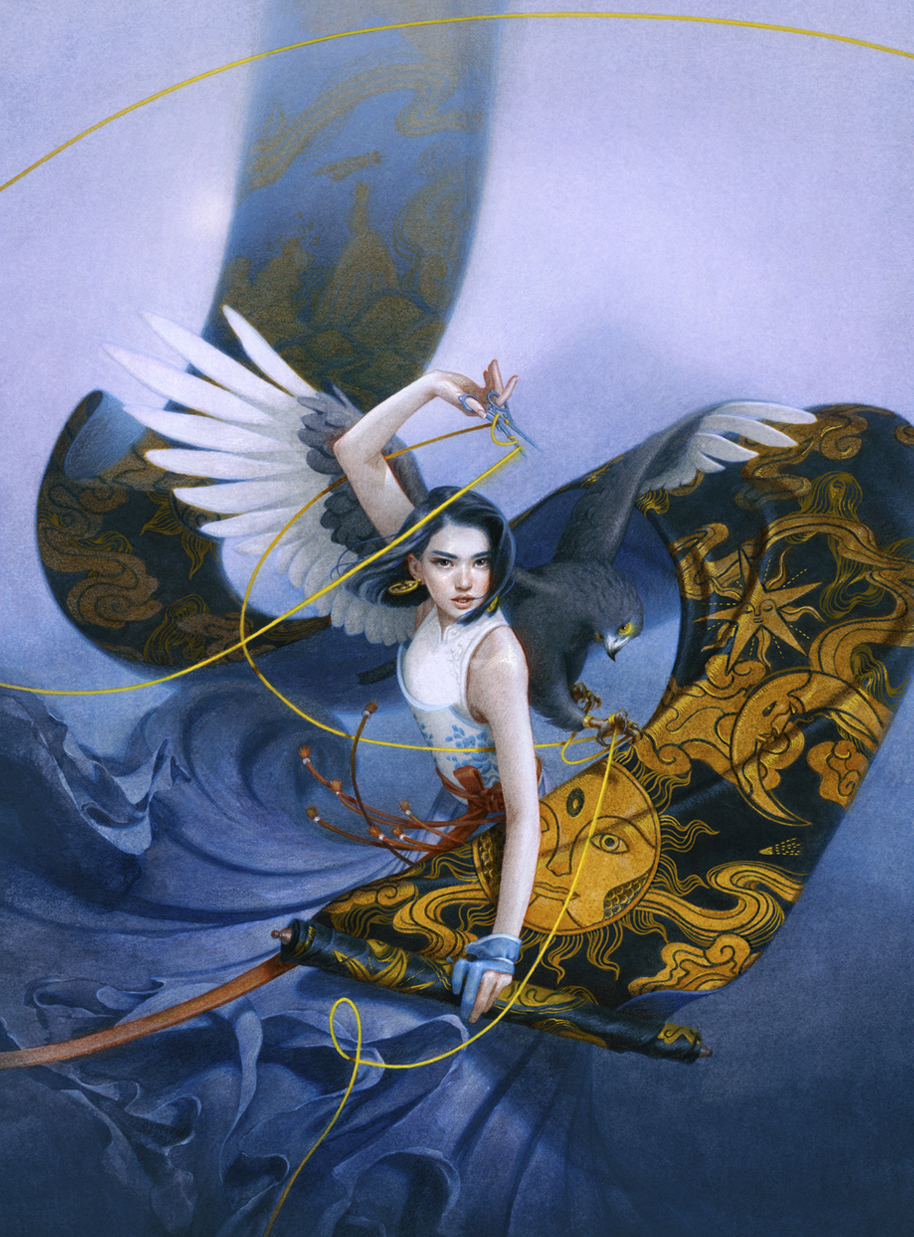 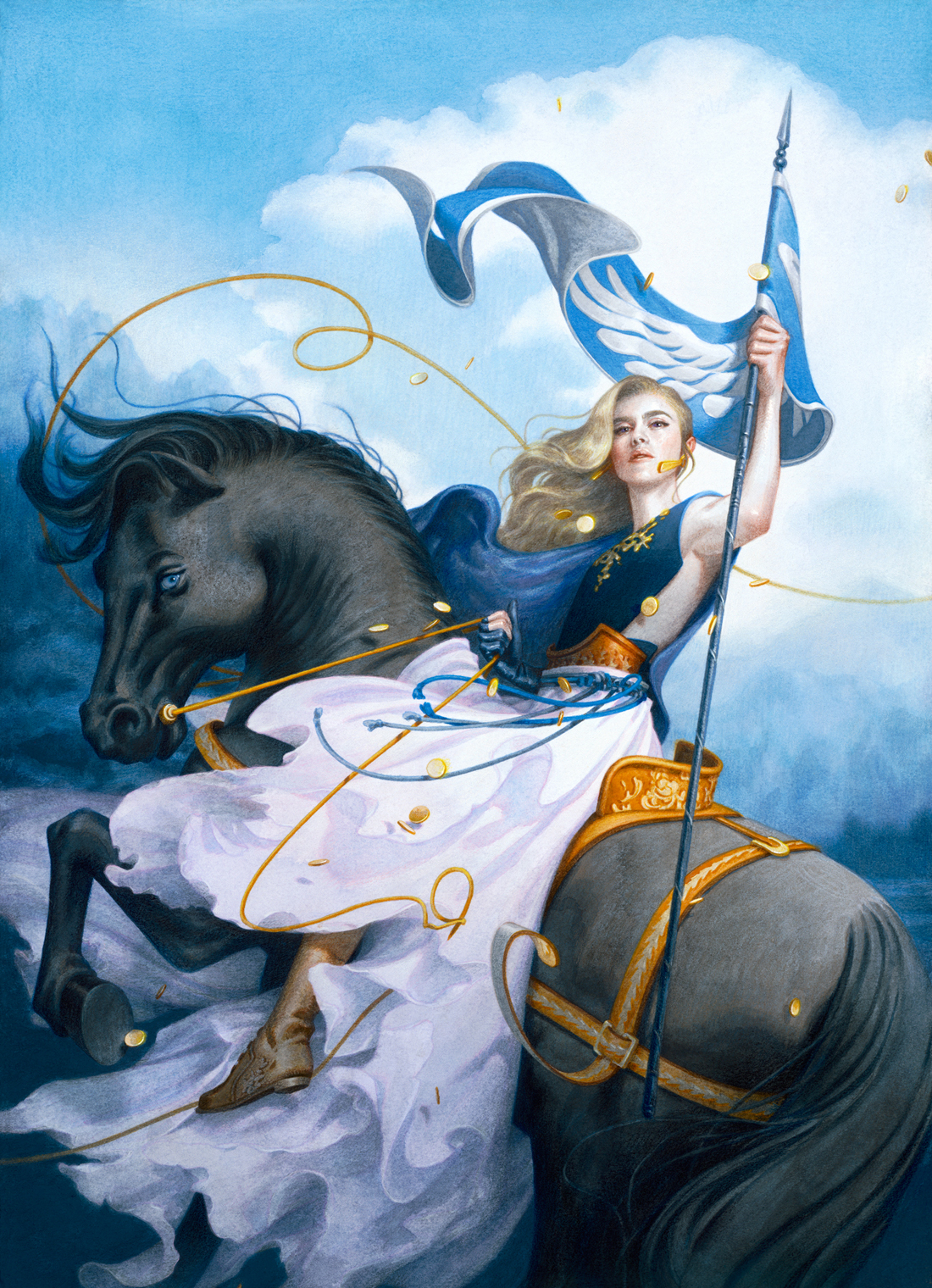 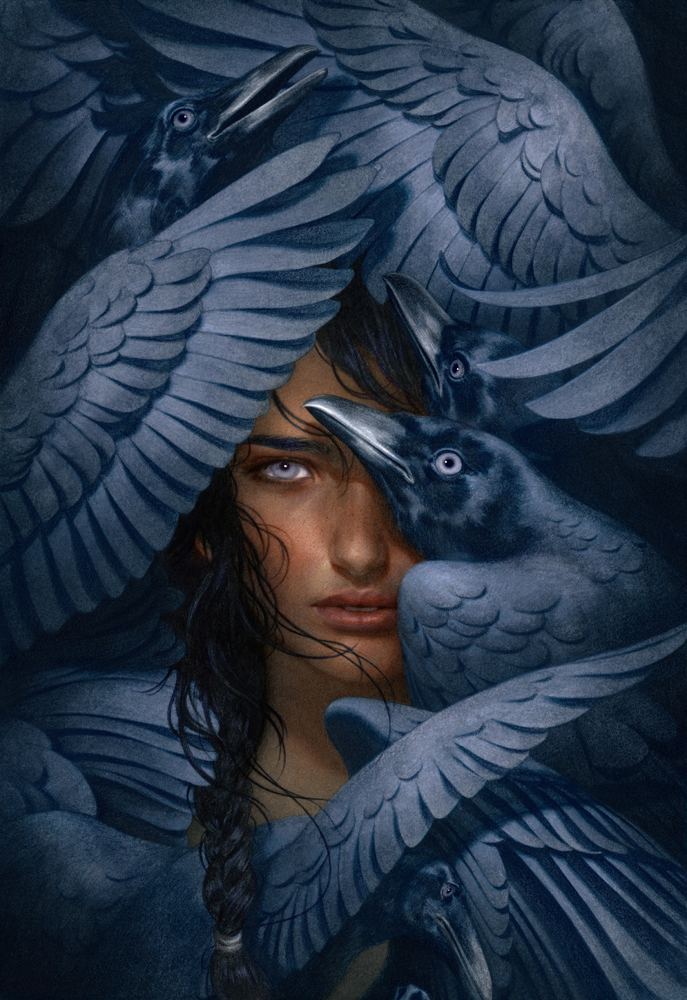 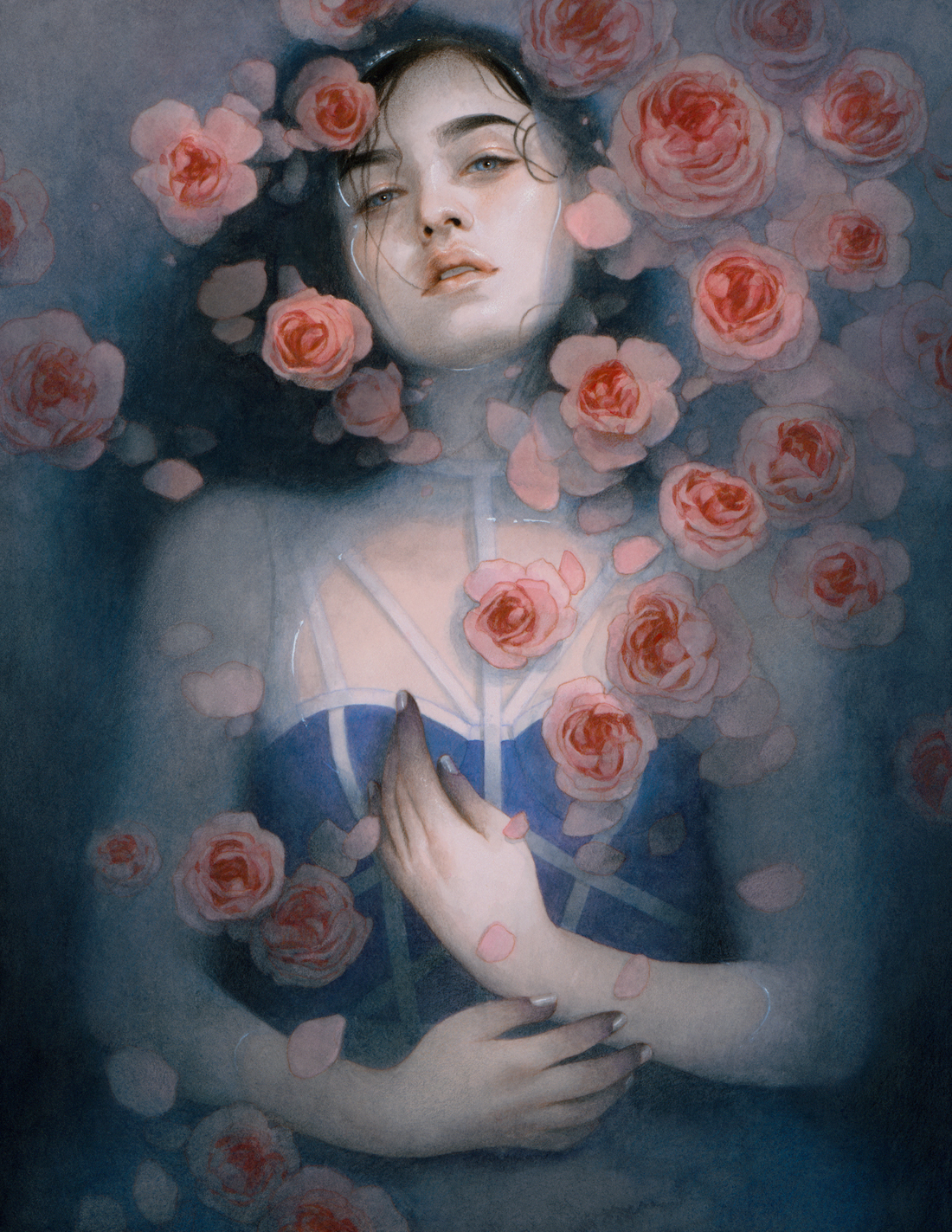 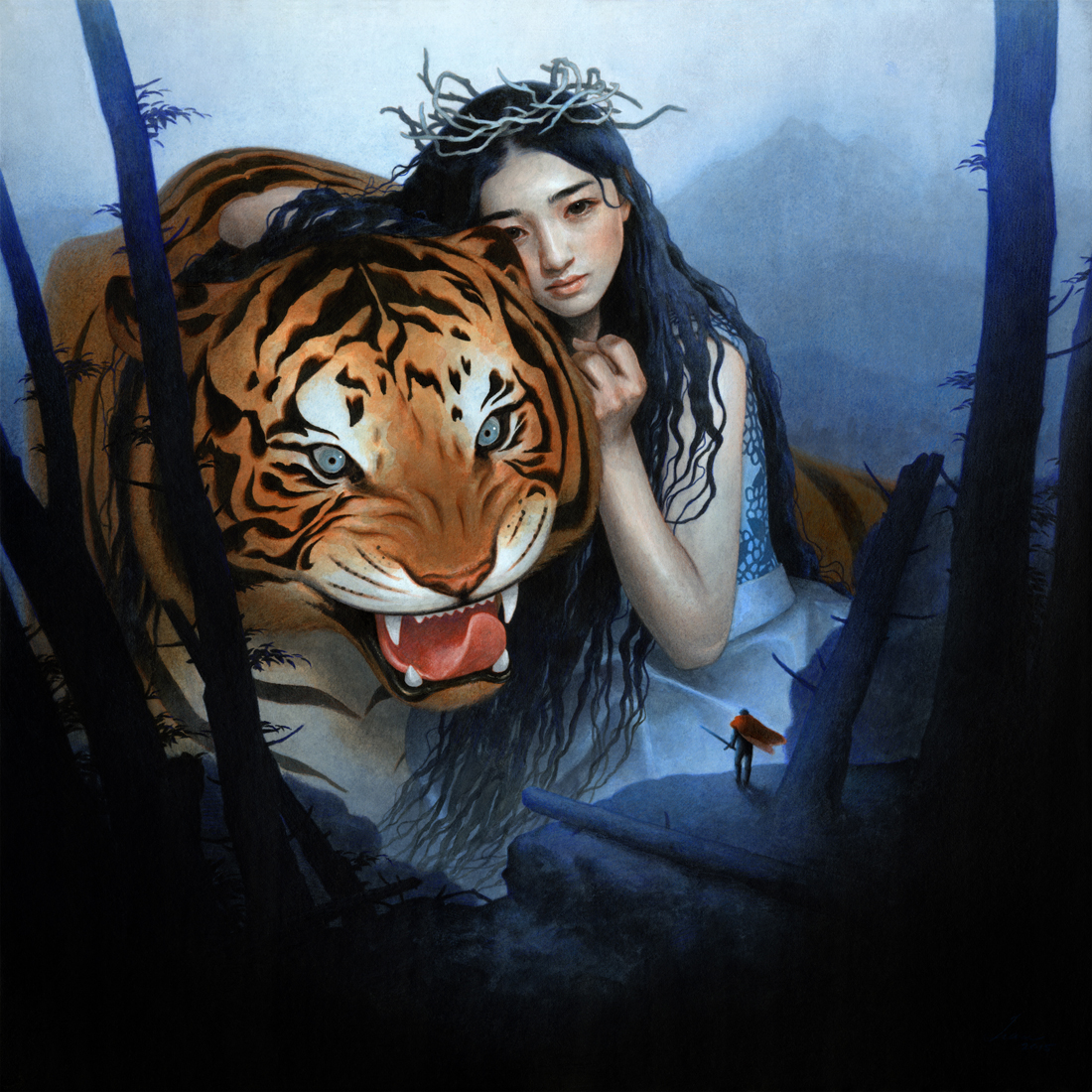 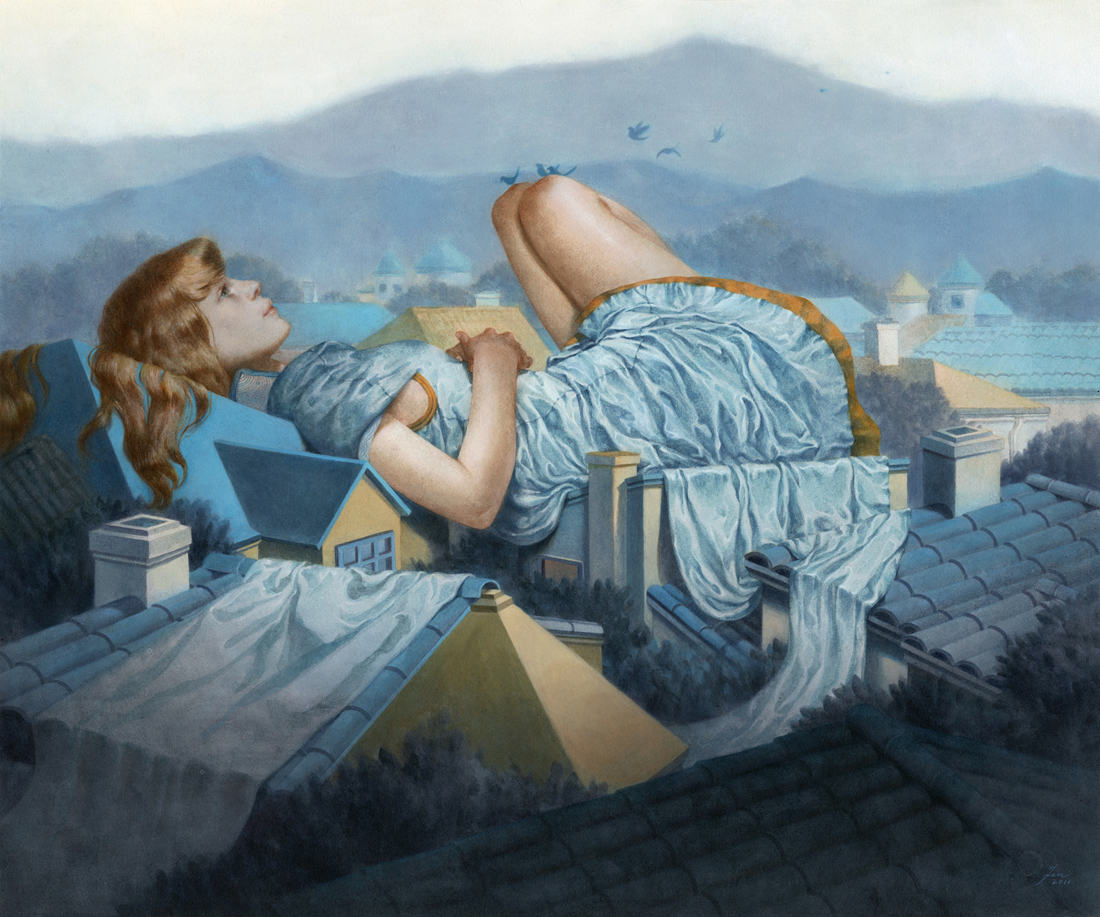 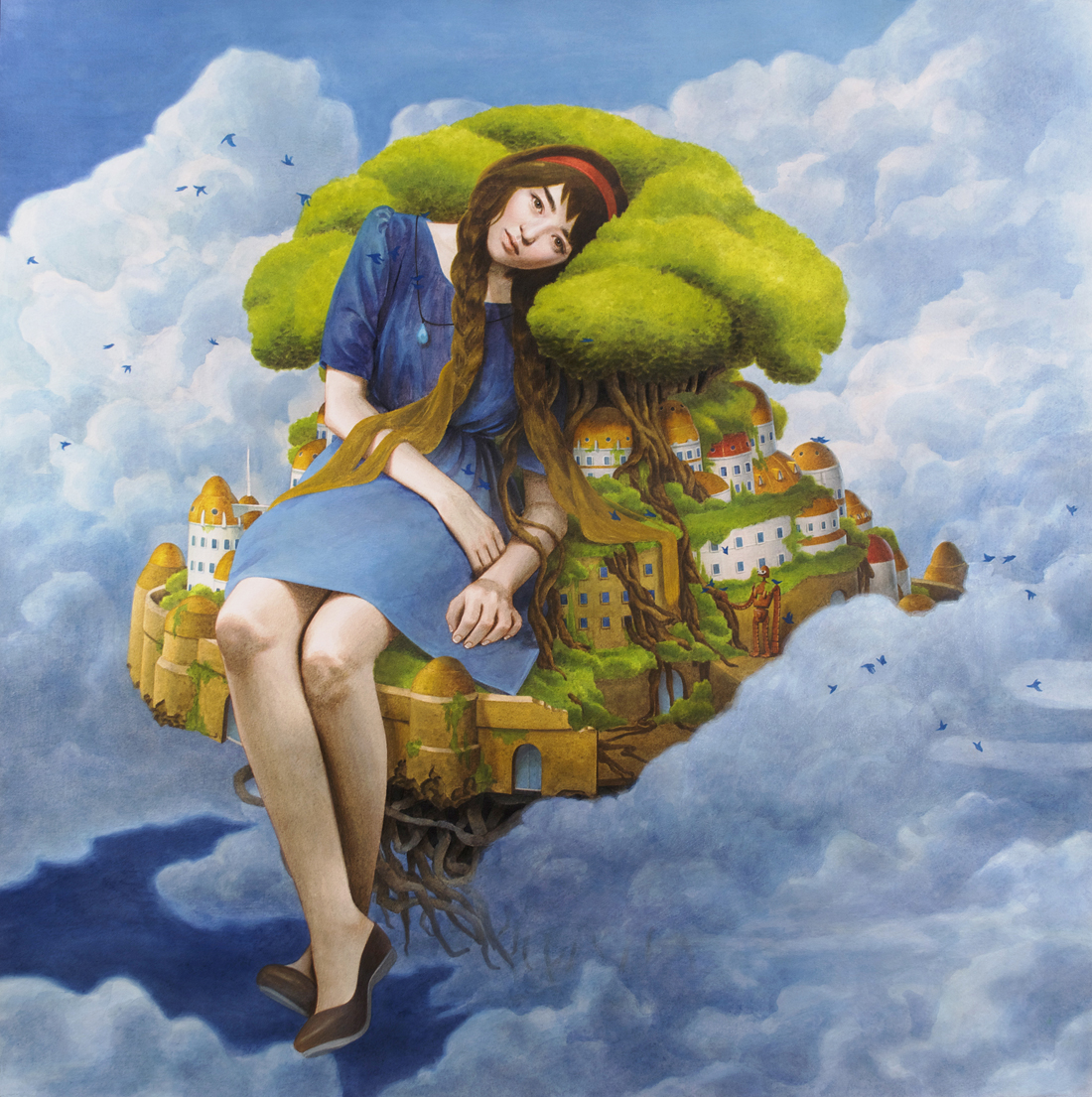 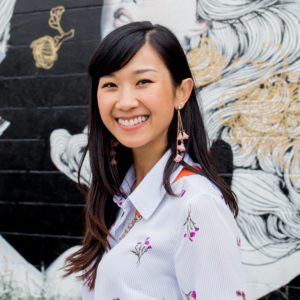 I’m a freelance artist most known for my softly rendered paintings of whimsical women and their melancholic dreamscapes. My paintings are made with delicate strokes of acrylic and colored pencil on paper, and often possess an air of fantasy and surrealism.

I illustrate for published media, creating book and magazine covers, as well as brand packaging. I’ve worked with clients such as VH1, Amazon, Smithsonian magazine, Bloomberg, and Netflix. I’ve also exhibited with galleries across the world, creating original works of art for purchase. Recently, I’ve ventured into the street art scene and have painted large-scale murals in Hawaii, China, and California.

I’ve lived in Atlanta for several years now and I love how peaceful yet lively the city can be.  There’s a pretty sizable animation community here as well as a booming film industry.  It’s extremely diverse in culture and I’m a short drive away from amazing international cuisine.

I’ve lived in Atlanta for several years now and I love how peaceful yet lively the city can be.

Like any typical metropolitan city, traffic is awful here.  For the most part, I try not to leave the house between 8-10pm and 3-7pm.  On the upside, there are lots of great art supply stores near me so it’s nice to pop in and get the materials I need instead of ordering it online.  There’s also a ton of amazing Asian food here — a close second to my parents’ cooking.

As a kid in the 90s, I grew up watching the classic Anime shows such as Neon Genesis Evangelion, Bubblegum Crisis and Serial Experiments Lain. Surrounded by all of this magical art, I decided to pursue art after high school and enrolled at Savannah College of Art & Design.

After graduation, I took my first steps into the fine art scene and slowly paved my way through the gallery industry.  While painting for galleries, I found my footing in commercial illustration and began creating visuals for published media.  Currently, I’m working as a freelance artist, doing a mixture of gallery, illustration, and mural projects.

As a kid in the 90s, I grew up watching the classic Anime shows such as Neon Genesis Evangelion, Bubblegum Crisis and Serial Experiments Lain. Surrounded by all of this magical art, I decided to pursue art after high school and enrolled at Savannah College of Art & Design.

My brothers were extremely supportive, but unfortunately, my parents had their reservations.  My parents grew up in impoverished conditions in Vietnam, living in a metal-roofed shack with dirt floors. In 1990, my family and I were given the opportunity to come to the States so my parents decided to leave everything they knew and loved to move to the United States so that my brothers and I could have a better future.
Working as a freelance artist is a foreign concept to them and I completely understand why they would feel that way.  Their upbringing makes it difficult to fathom stability with such an unfamiliar occupation.  Although they initially had strong reservations towards my artistic endeavor, they’ve always been proud of me and have never belittled my decision to pursue an art career rather than a medical one.

I’d like to do more mural work in the future.  There’s something visceral about painting at a grand scale and interacting with the community and locals that live near it.  I’m usually locked away in the studio when I work on my illustration and gallery projects so it’s nice to physically be part of something when I’m working on the murals.

I’d like to do more mural work in the future.

Probably Hayao Miyazaki.  His work is extremely precious to my childhood, particularly “Nausicaa of the Valley of the Wind” and “Laputa: Castle In the Sky.”  I watched them when I was a teenager, and it filled my heart with so much joy, goodness, and of course, girl power.  I’d love to work with him on a project to create something that can do the same for the next generation.

The women around me tend to be strong-willed and kind-hearted.  My mom has faced a lot of hardship, yet has kept her warm and good-natured qualities.  Same goes for all of my close female friends.

The women around me tend to be strong-willed and kind-hearted.

My oldest brother’s female friend in high school was an exceptionally wonderful artist. I never met her, but she let my brother borrow her sketchbook one day, and I was completely floored by all her wonderful Anime-style sketches and illustrations.  I studied them for hours and even tried to draw just like her for a few years.  It inspired me more than she will ever know.

Fortunately for me, I haven’t had too many challenging incidents as a female artist, just ones that pertain to artists in general.  There’s a fairly balanced ratio of women illustrators/gallery artists to men, and as a freelancer, I rarely interact with people.
Although they’re seldom, there have been a few occasions where male art collectors will make inappropriate remarks about my looks as opposed to my work.  This tends to only happen at comic conventions where the ratio of men to women skew a bit.

I believe dedication and resilience have led me to the career I have now.

I believe dedication and resilience have led me to the career I have now. Visual arts is an extremely competitive industry, especially with the turbulent demands of being a freelance artist.
The first years of my professional career were the most difficult. I learned what I know now mostly through trial and error. Starting out, I didn’t possess a solid portfolio nor was I established enough to be noticed by art directors. These early years were dedicated to clocking in at the day job then honing my art technique in the after hours. Dedication and thick skin are what helped me push through hard times before I was able to stand on my own feet as a full-time freelance artist.