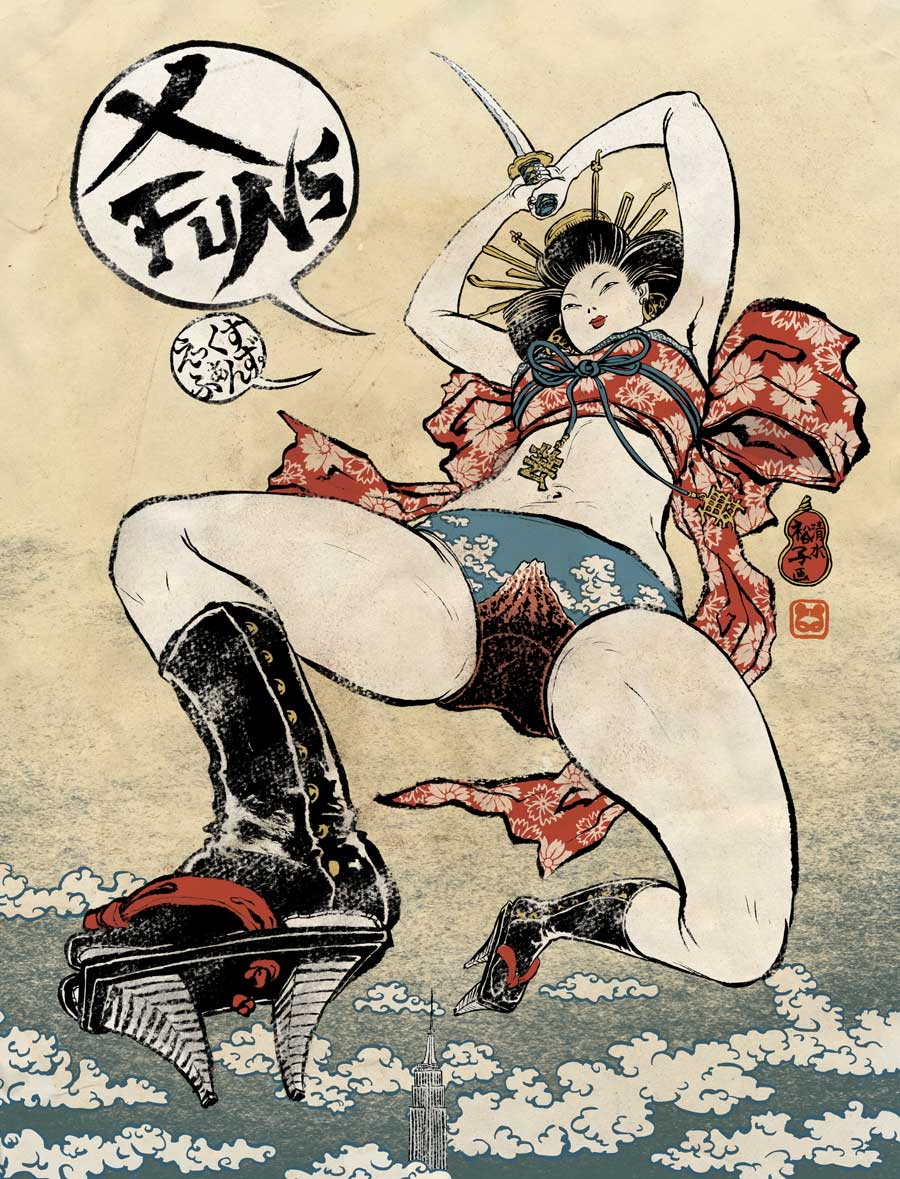 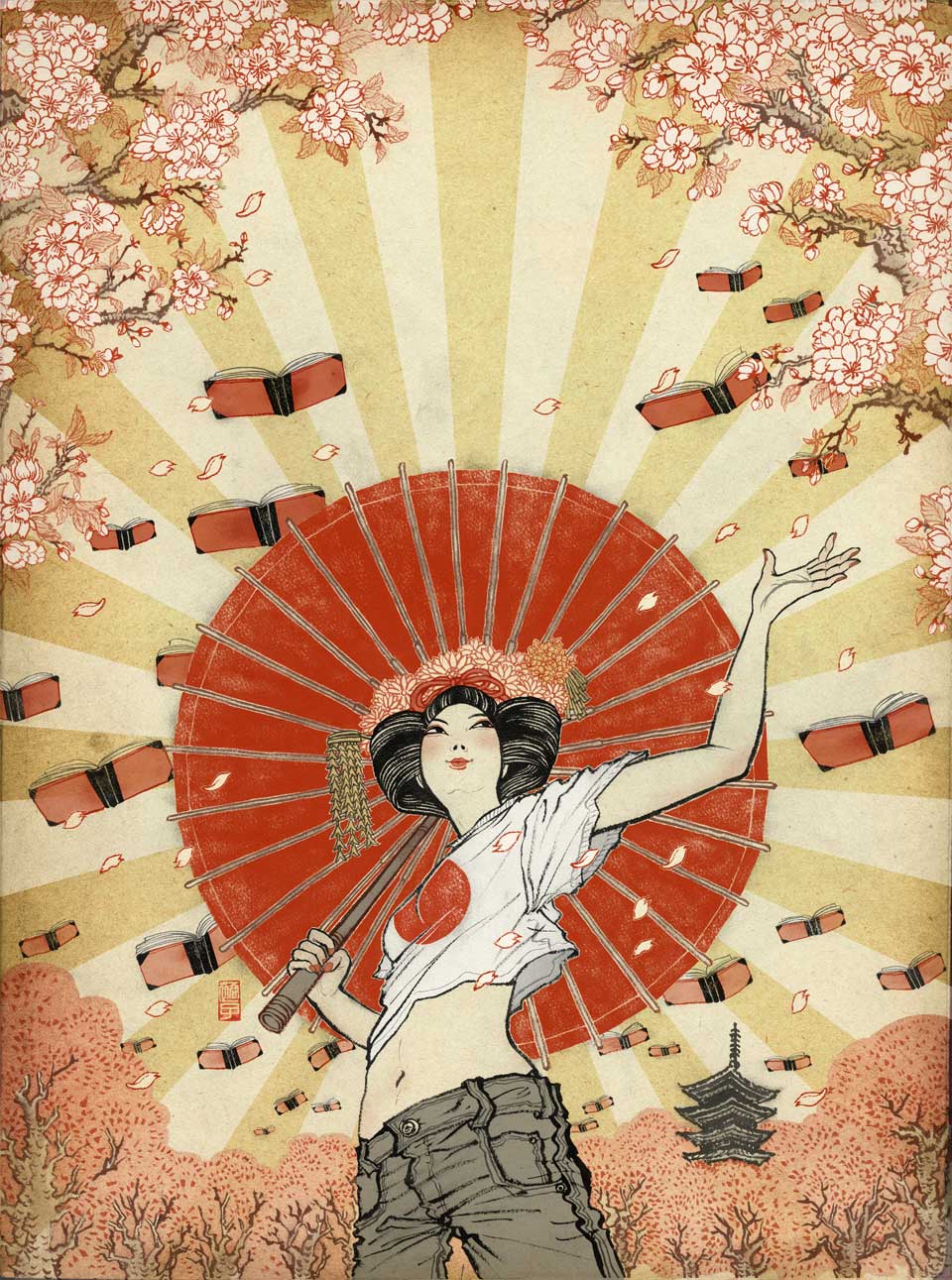 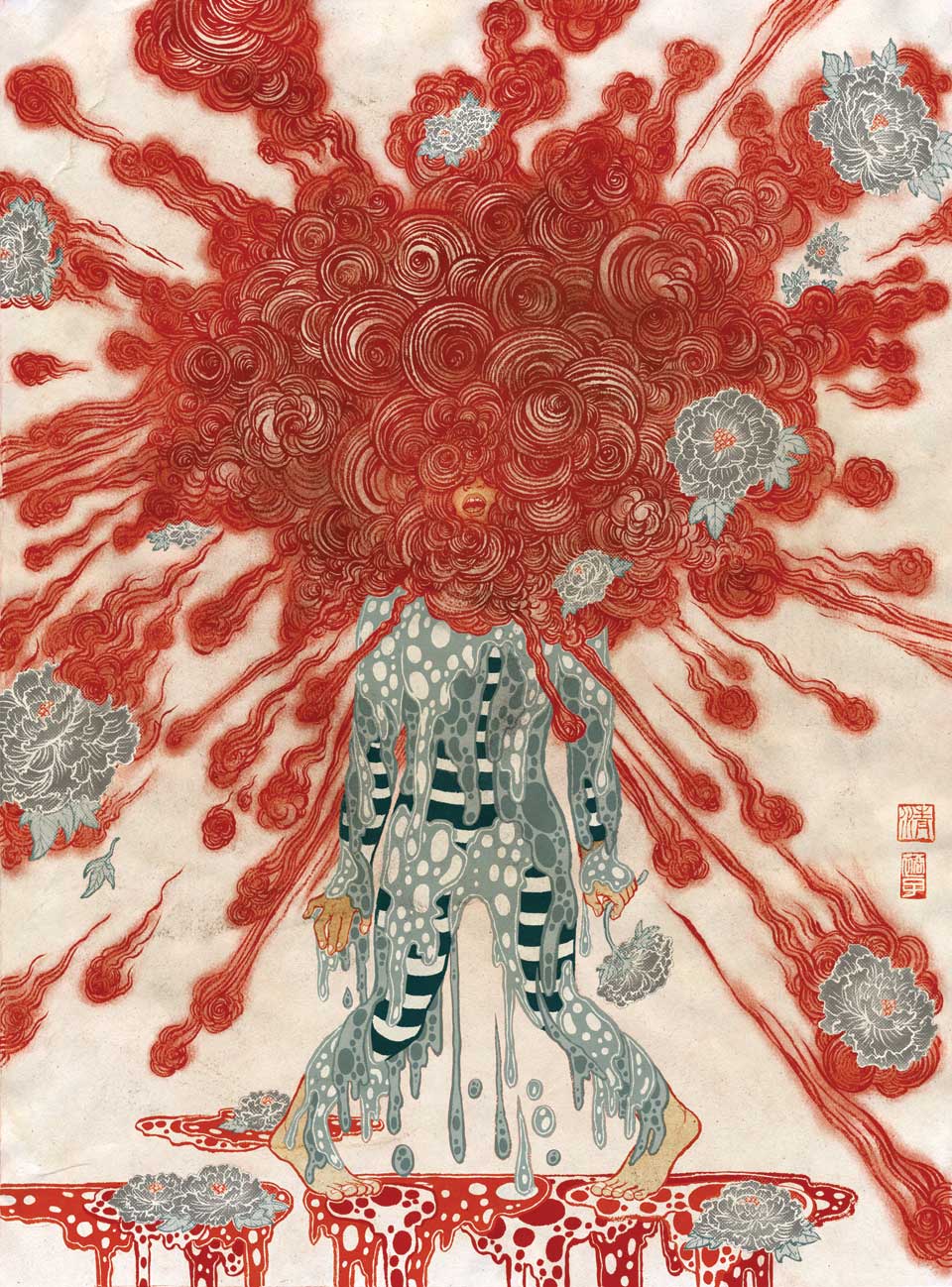 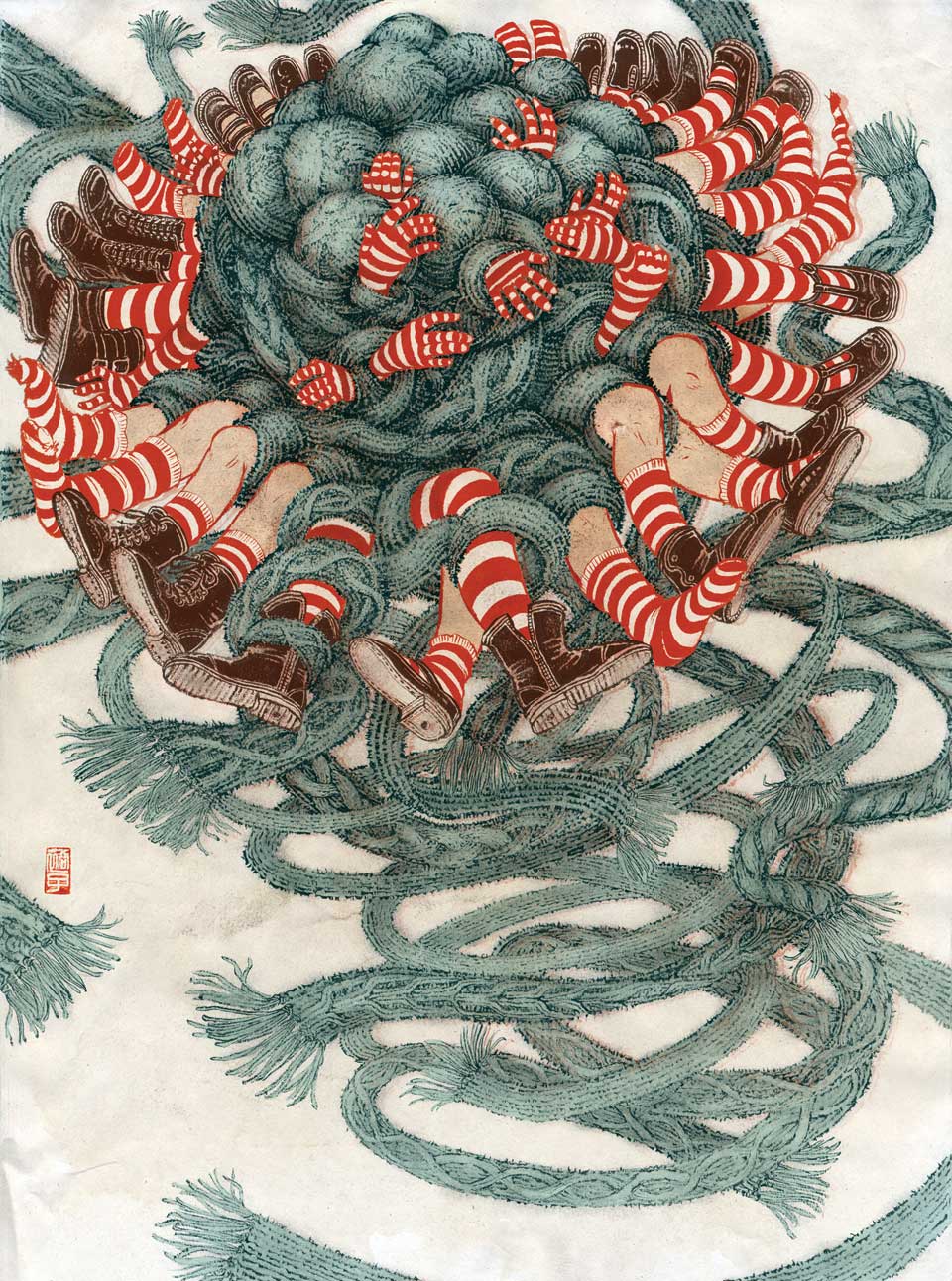 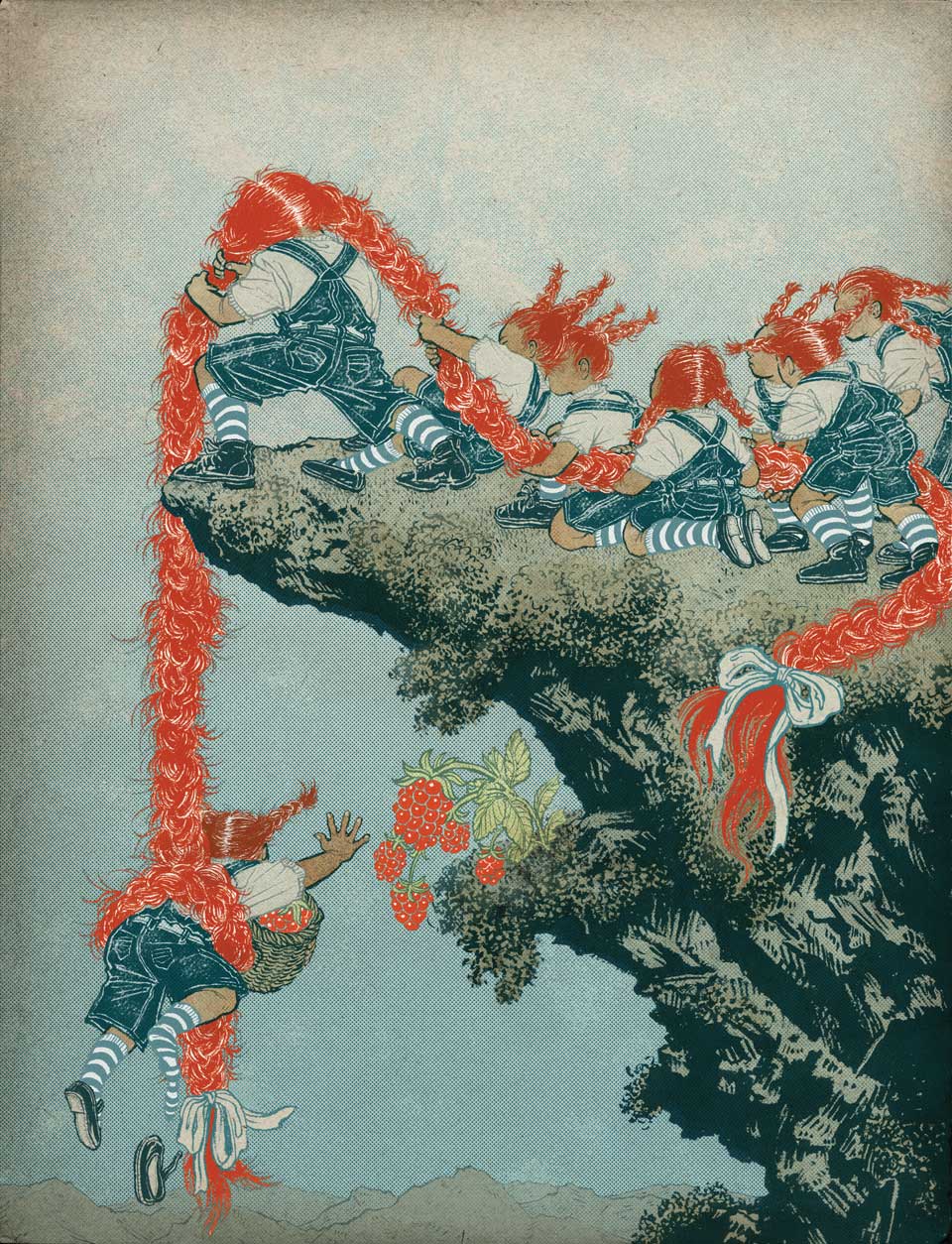 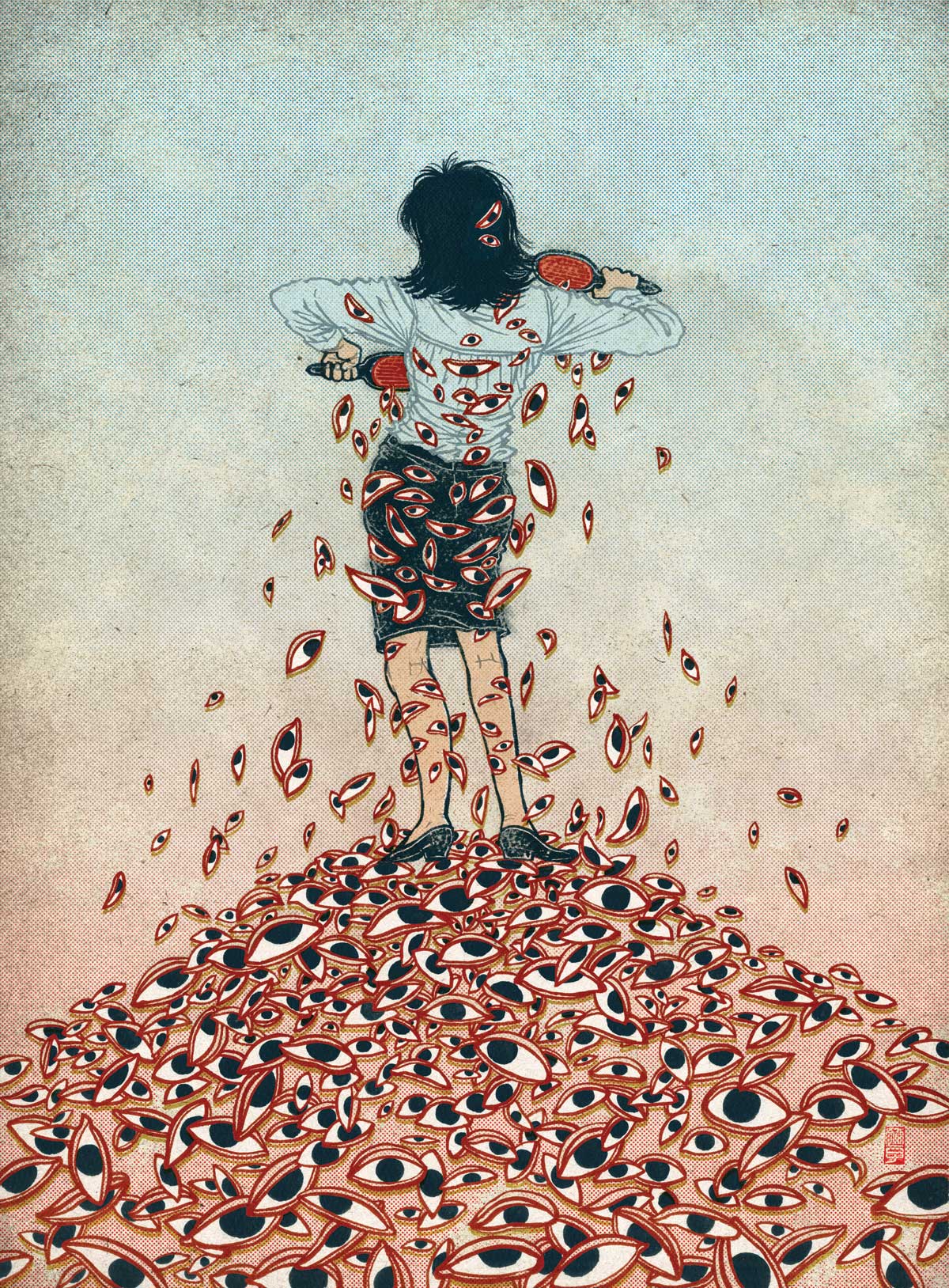 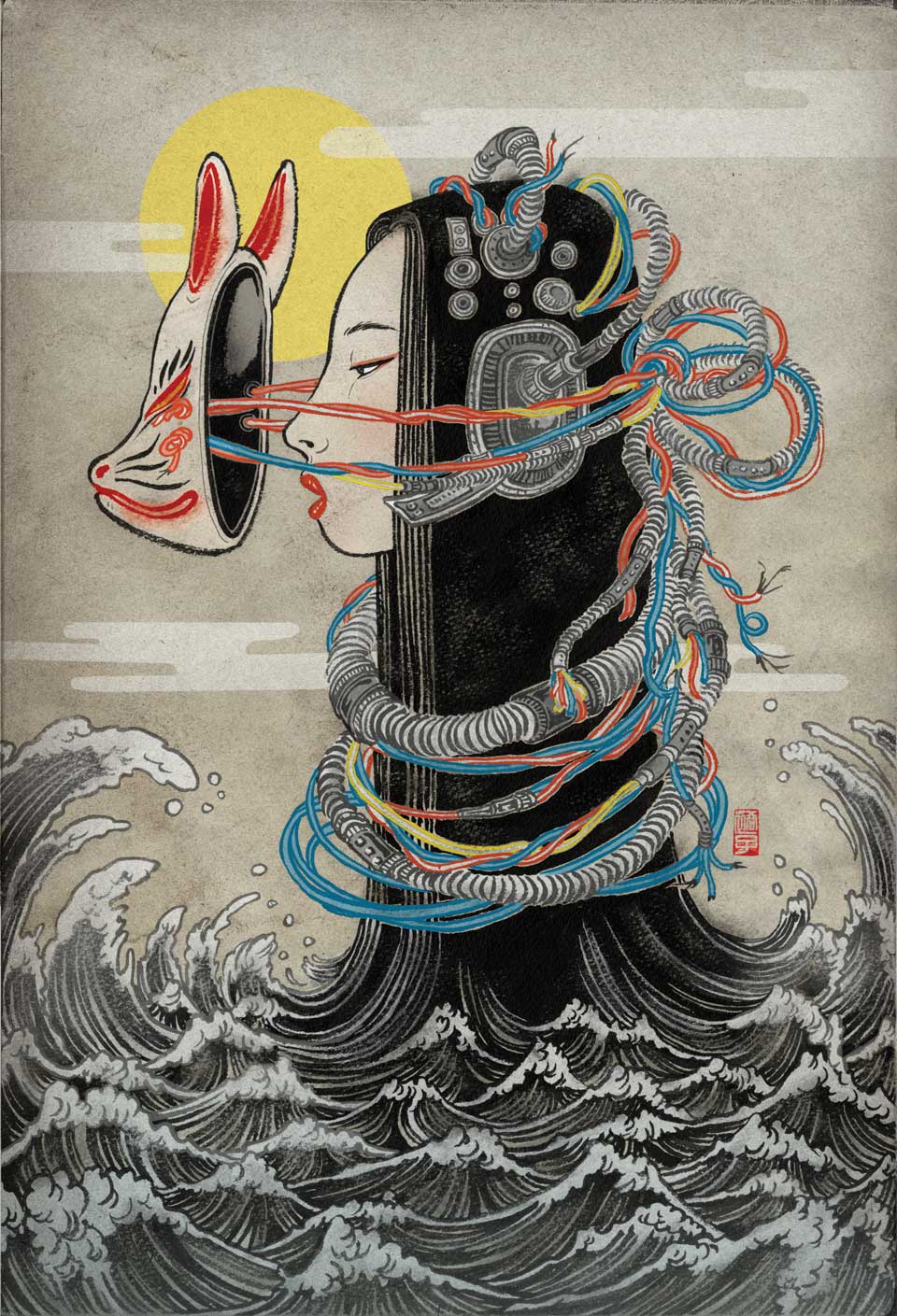 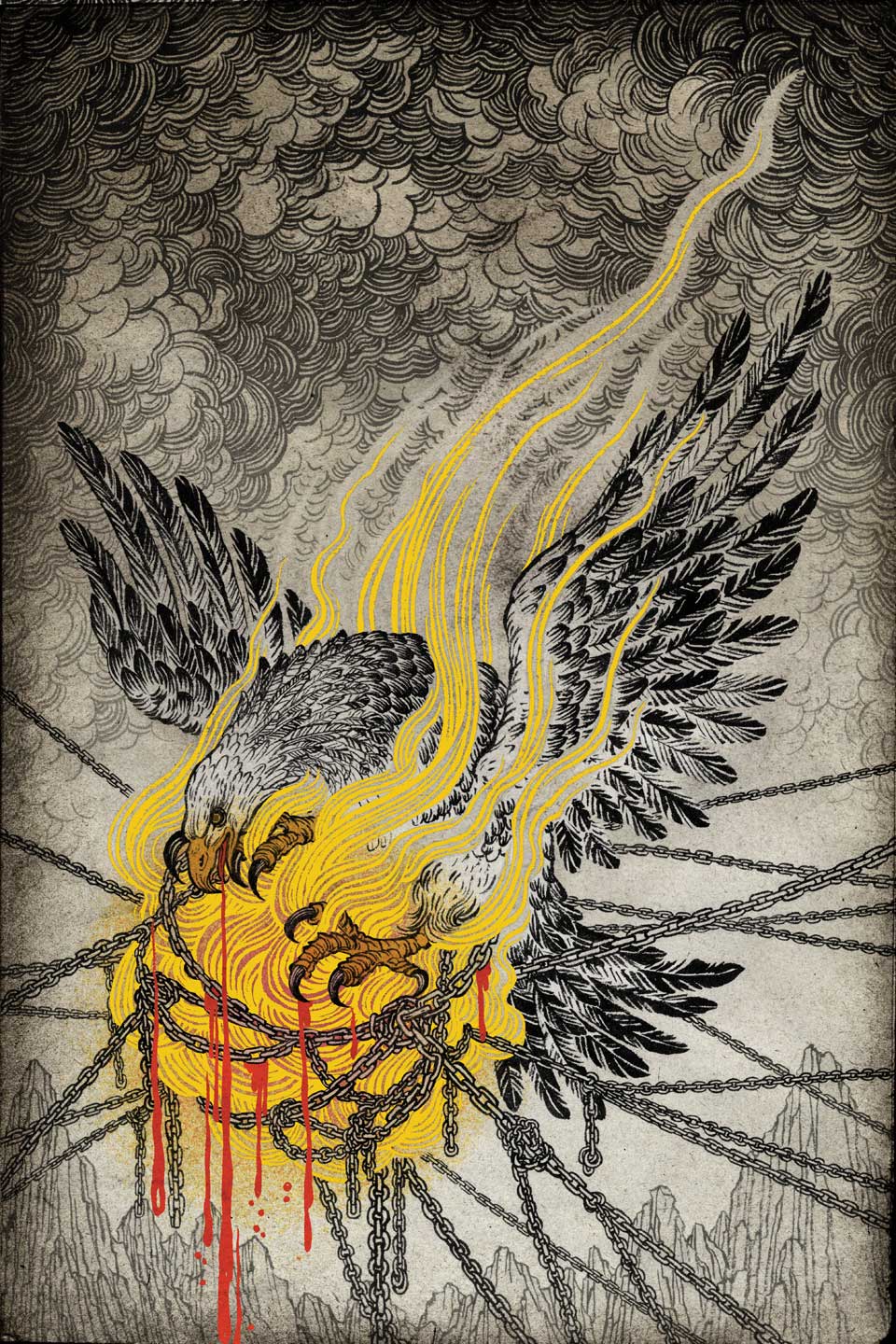 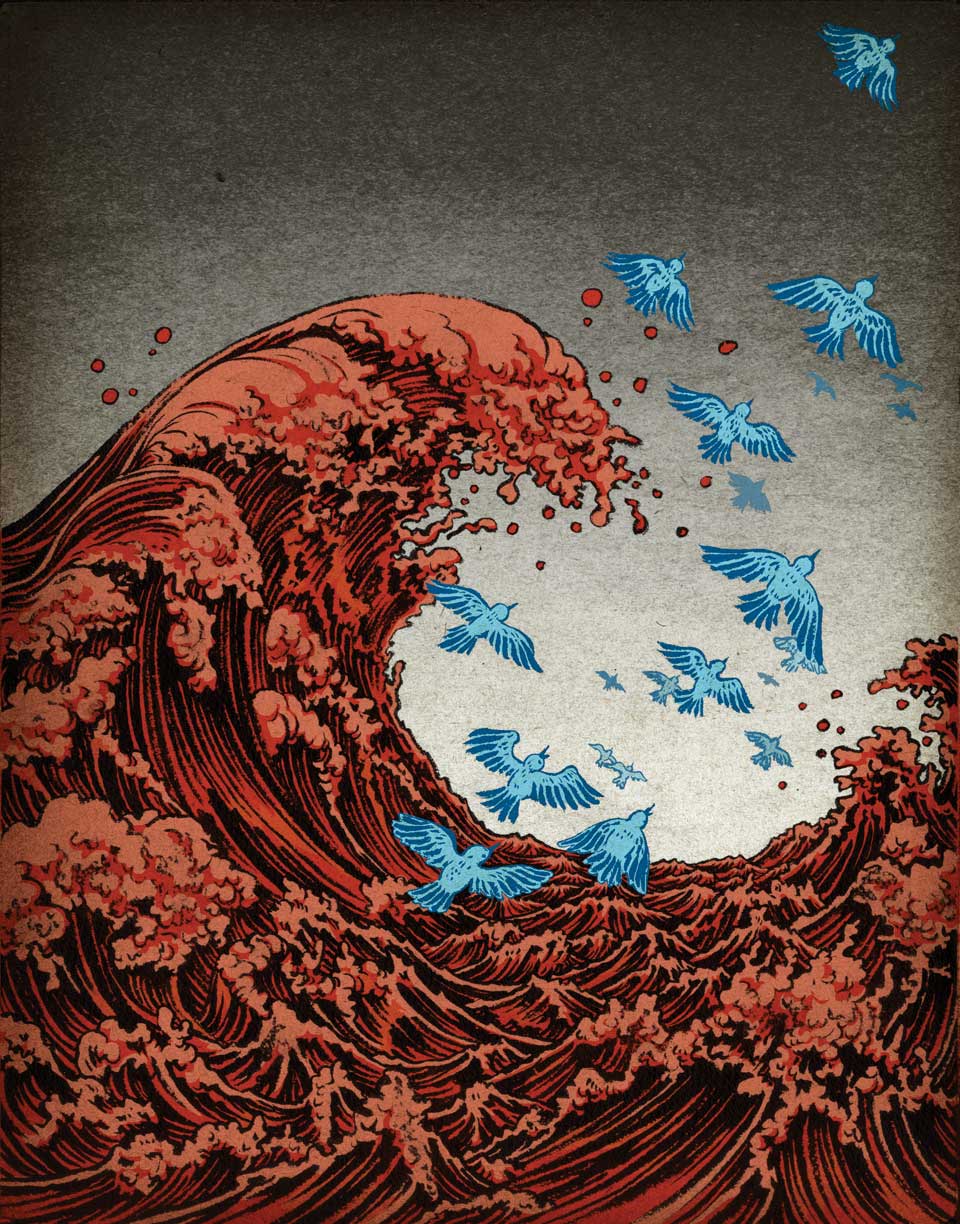 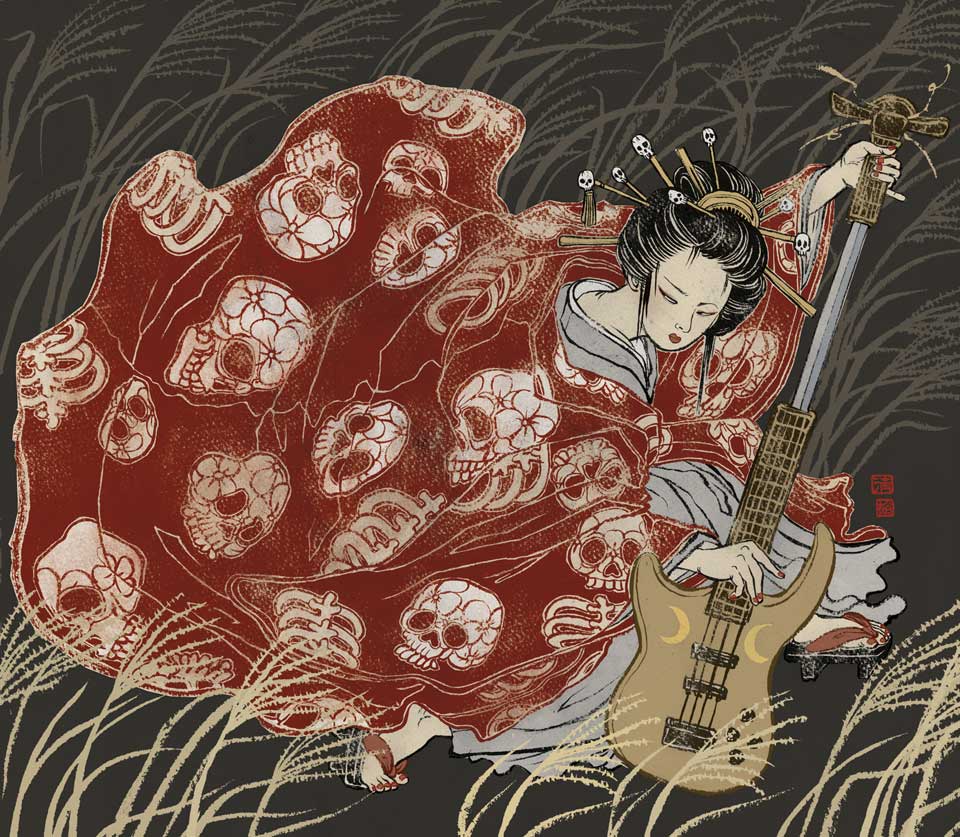 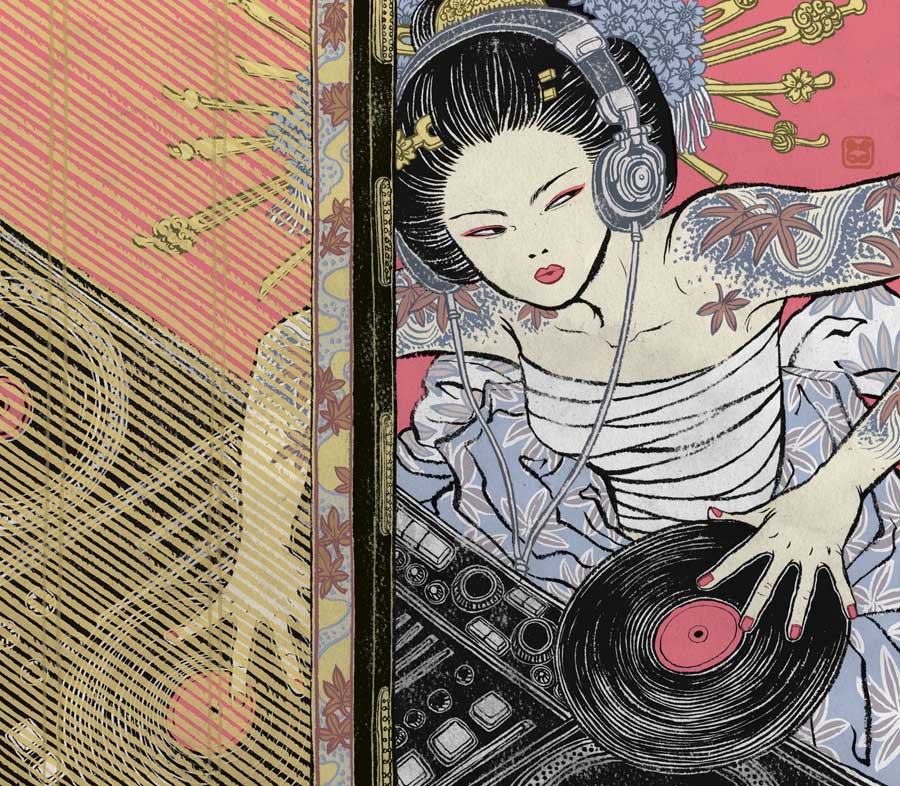 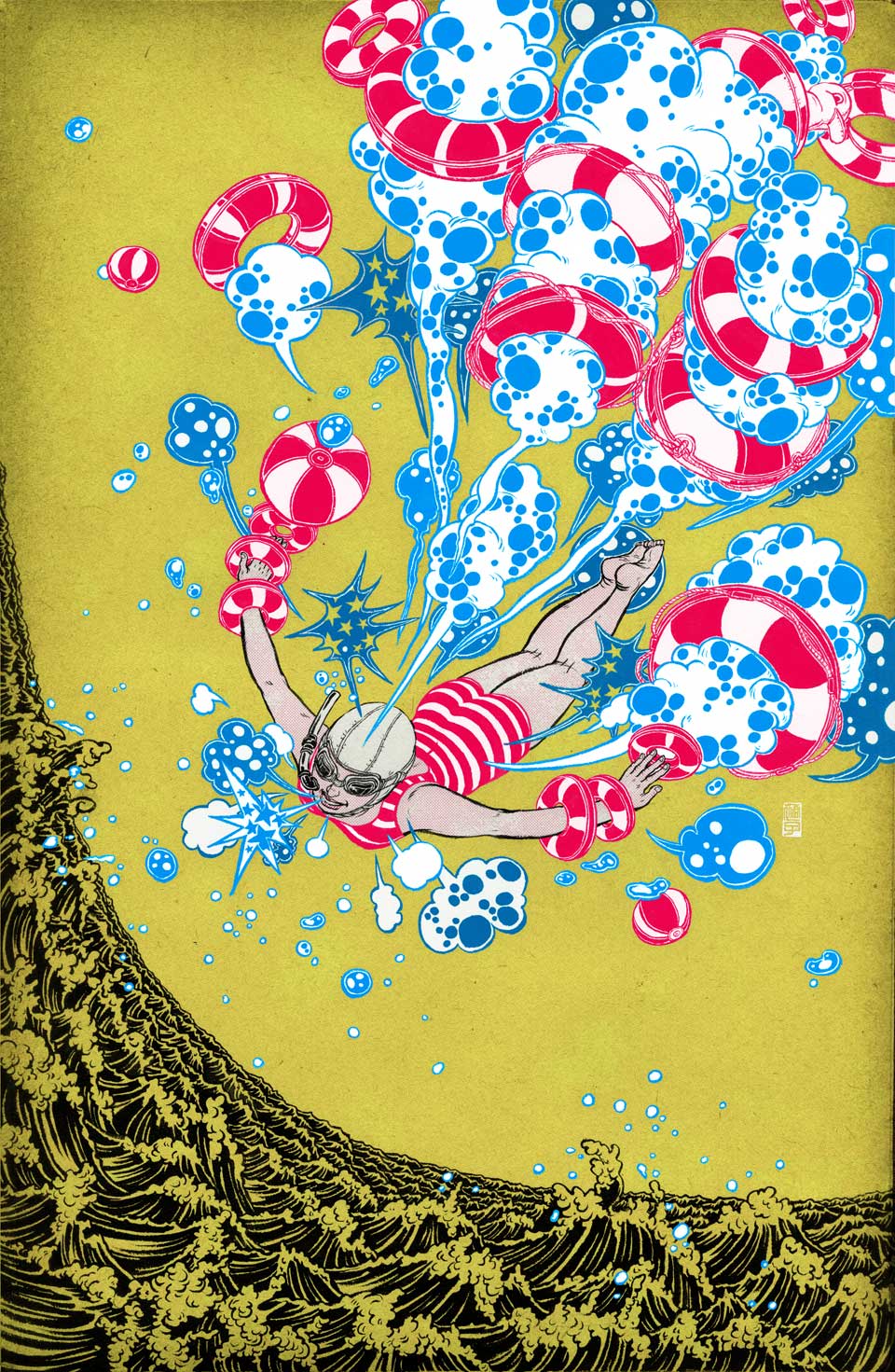 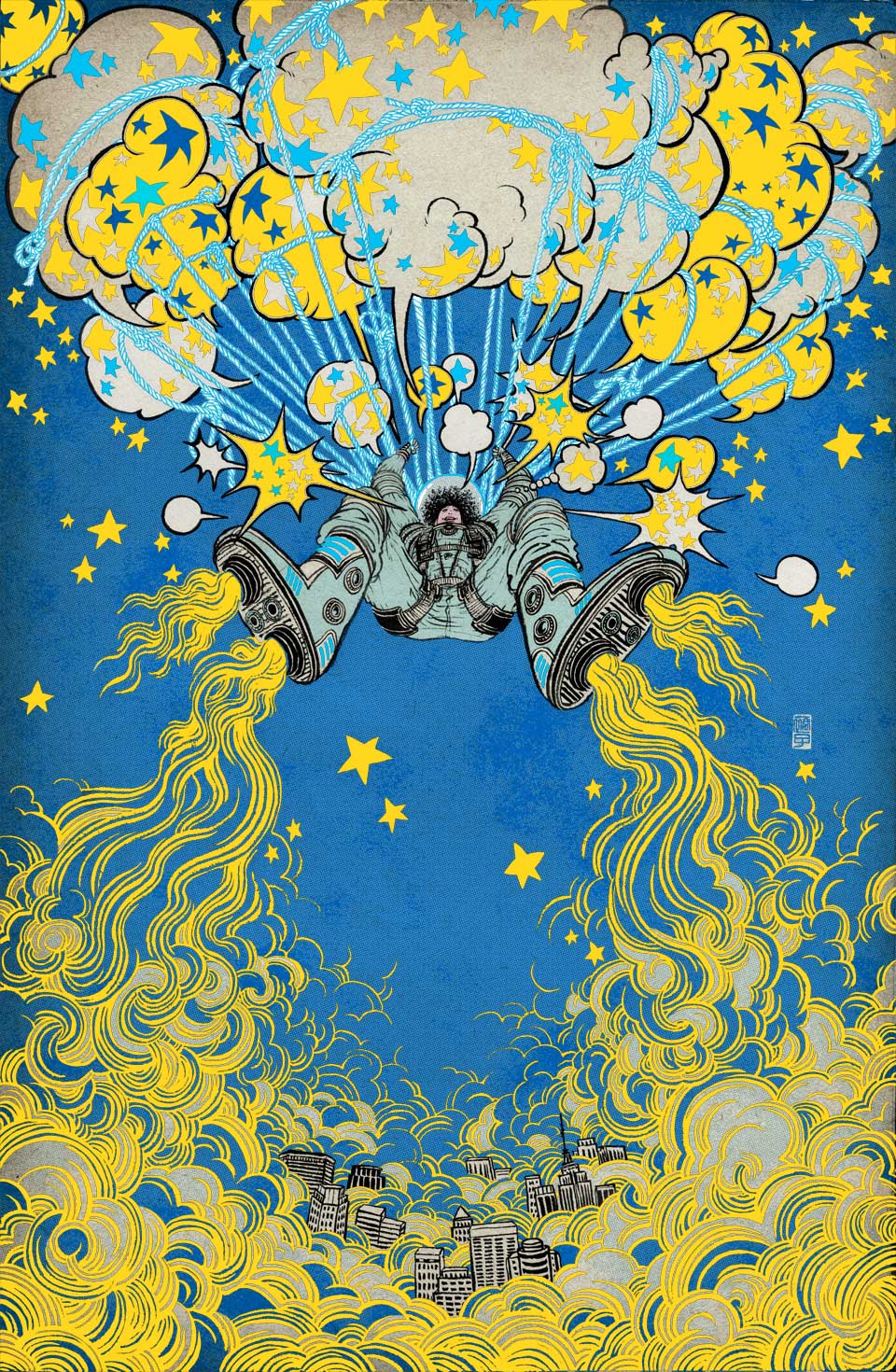 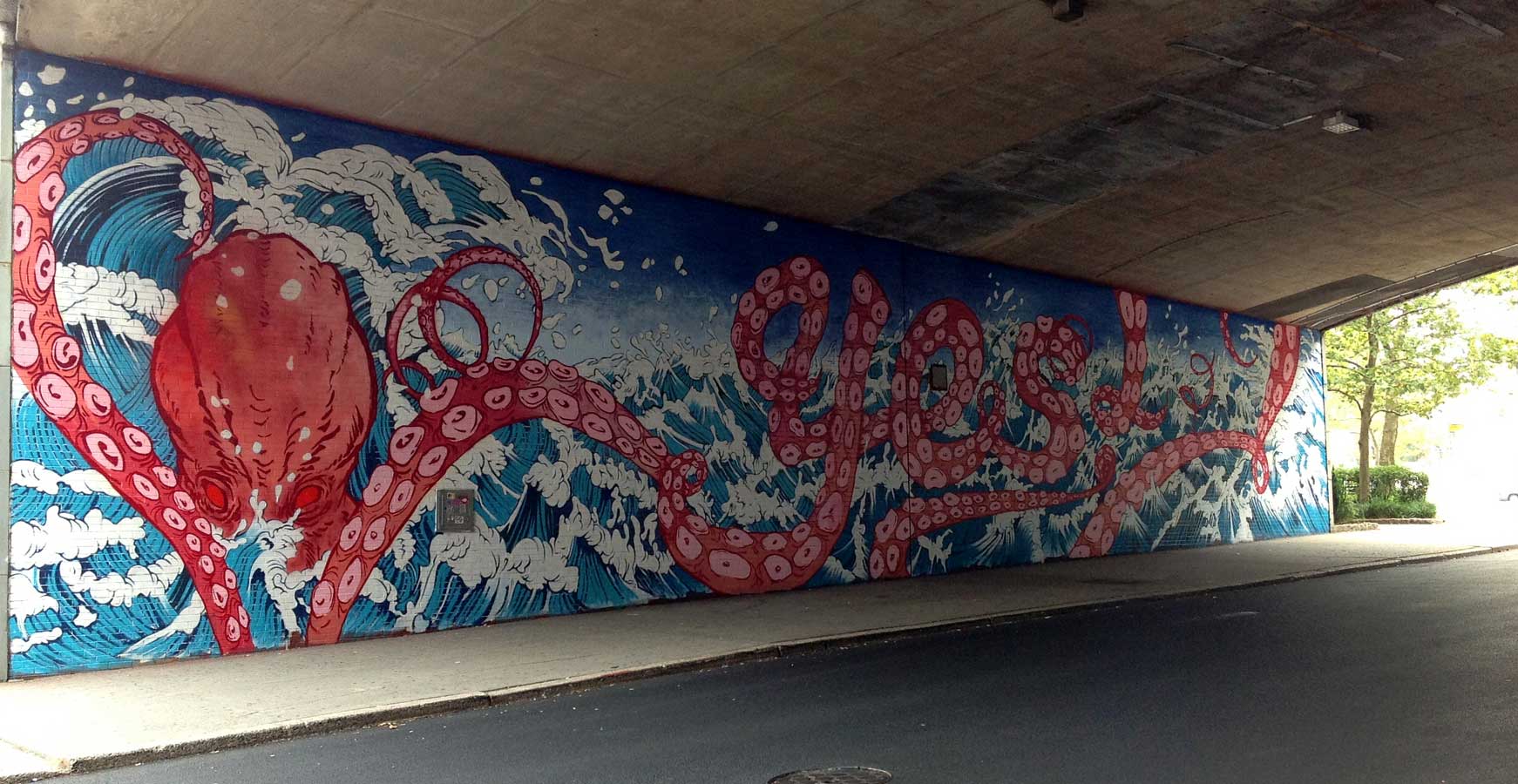 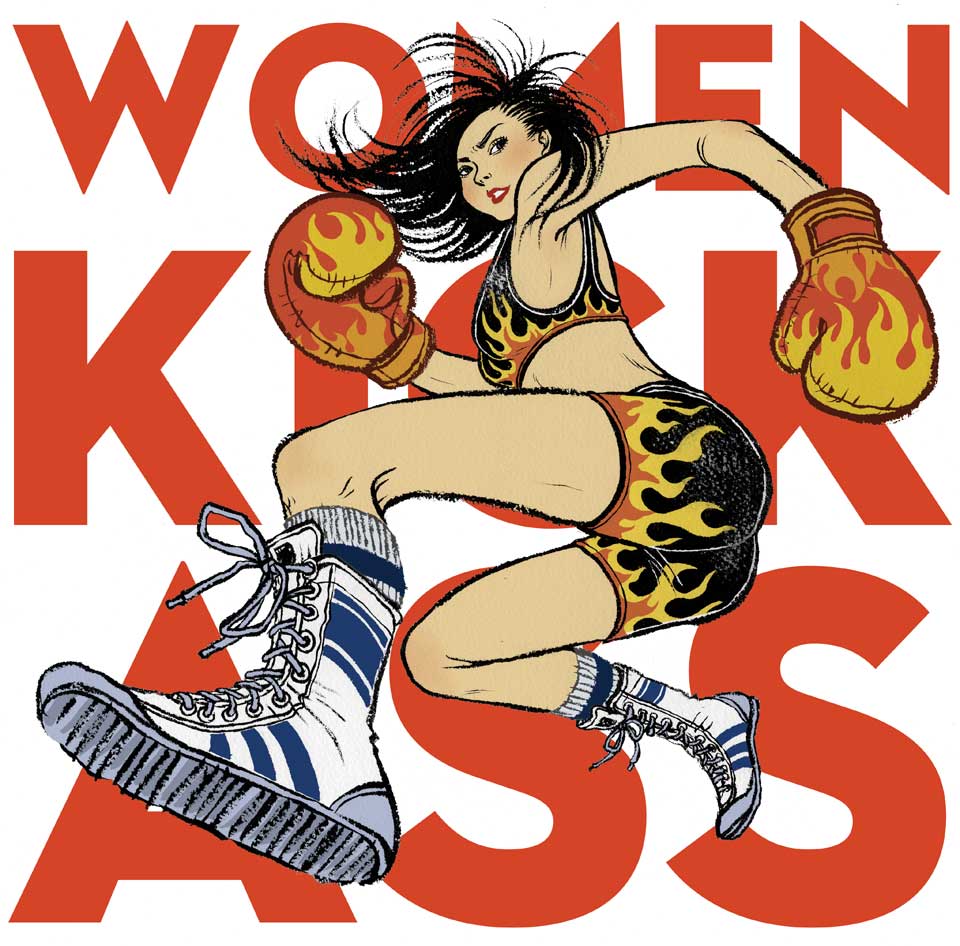 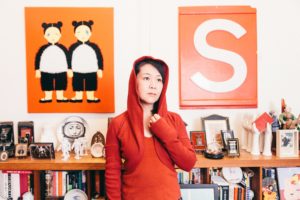 I am an illustrator, well, now I am. I have been doing this since 2003, so I am considered mid-career. I have also been teaching at my alma mater (School of Visual Arts, NY) for as long as I have been working professionally.
This is not my first career. I had a whole different life before this. I am kind of a ‘born-again artist’?
The only reason I studied advertising and marketing in business major (School of Commerce) from a university in Japan, was because I thought it was the most creative choice I could make in a practical field. Don’t get me wrong, I was ALWAYS drawing. Ever since I can remember. But then again, at a young age of 17-18, I didn’t know what I really wanted in my life. My parents are typical Japanese parents who thought the best life choice for me was to major something very practical so I can get a good job. I could have insisted I wanted to go to art school, but I honestly was lost and didn’t have a good argument. I actually did enjoy what I studied. I still hang out with my college classmates whenever I go back home. Many became ad executives by now. They are an open-minded bunch, and they accept my ‘odd choice’ of becoming an illustrator.
Now I teach college students, I often reflect how I was when I was their age. There are some who are completely dedicated and focused, knowing exactly what they want to be doing, their mind set to become illustrators. I am amazed. Good for them. I was not like that. I also see these young lost souls. Some of them lost interest in what they are studying, they want to do something else. They just want to get this over with, get a diploma and move on to a new phase in their lives. I tell them, “look, don’t ever feel guilty for not wanting to do this. I never pursued what I studied. I am perfectly happy. Nothing you ever studied goes to waste. And the most important thing is that you will choose the path that makes you happy”.
After I graduated from college, I got a job doing corporate PR. I liked the field of PR, but being in a corporate environment was not for me. I quickly understood what would work for me is to be my own boss. But again, I was young, and I was kind of lost.
I ended up working for 11 years there. When I was around 30 years old. It kind of hit me, that I only live once, and it was not the life I wanted to be in. It still took a while for me to really think and figure out what I wanted to do. Eventually, I came to the conclusion that I always loved to draw, and always wanted to be an artist.
I saved the money aside, packed up two suitcases and left my job, and my home country of Japan. Moved to New York to study art for the first time, in 1999.
I started at first-year college because I have never taken drawing or painting classes. My classmates, at least most of them, were around 18, pretty close to half my age. I still keep in touch with some of them, and amazingly, they are full-fledged adults now!
Two years of college life went by, and the chairman of school Thomas Woodruff, who I respect so much as a person and as an artist, suggested and helped me apply to the graduate program, and I did two more years. In the end, I graduated with MFA in Illustration and started working professionally.
It’s 20 years since I moved to New York. It feels like just yesterday, and it also feels like ages ago. I sincerely feel I am very fortunate to be able to do this full time.

New York is not a perfect city. No city is perfect, for that matter. Every time I travel out somewhere, I ask myself a question: Can I live here? So far, no city has beaten New York yet, so I am here.
New York is filled with people with high ambitions and doesn’t mind putting a lot of work toward it. New Yorkers are always busy. I don’t see friends for months often, and it’s not just me, it’s everyone. Though I may not see people I like to see as often as I like to, but they are still inspiring. You can have your own ideas and opinions. Nobody judges you because everyone is different. These people, who have their own goals and ambitions and dreams, they make New York a very lively and exciting place. It’s creatively very stimulating.
It has gotten extremely expensive to live. It has always been, but it has gotten a lot worse. NY used to be filled with young people with lots of ambitions and dreams with no money. People with ambitions and dreams still come, but it’s really really difficult nowadays to be poor here, which makes it harder for younger energy to thrive.

Every time I travel out somewhere, I ask myself a question: Can I live here? So far, no city has beaten New York yet, so I am here.

I spoke in length about how I started. Basically, after school, I started promoting my work, a bit by bit, and work came bit by bit. One of the best things about studying in New York was, and still is, people who teach you are the people who do this for living. So, the professors helped me a lot. Peers I met along the way helped me a lot, also the client who hired me in the beginning helped me a lot.
When people outside of New York think about the creative community here, they assume it’s cutthroat and competitive. Yes, in a way that is true, but what’s great about here is we all do our own thing. If I do my thing and you do your thing, we don’t need to compete with each other. It is not I get a project if you can’t get it. It is either a client want your style or my style. It’s a healthier competition. Ugly competition only happens when everyone pretty much does the same thing. Do your own thing, and you are better off in so many ways. NY is great for respecting and helping each other.

First ten to 12 years, I worked mostly on ambitions and goals. I had a list of people I wanted to work with. Stuff like that. And it’s very important to be super driven if you want to do this, and want to do it well, especially in New York.
Right now in my mid-career, my goals have shifted. Maybe I am more easy-going, or maybe what I perceive as ambitions or goals have changed.
I’d love to do more larger and longer-term projects so I can dig deep into each project, and spend a lot more time and effort in each project. First years of my career, mostly it was one image project, finish in a few days, move onto the next. I want to dig deeper. I am just wrapping up a picture book project, that I spent on and off for a year called Cat Man of Aleppo. (the book will come out from Penguin Putnam in 2020) Half of that year was basically spent on research. Ideally, I would have loved to go to Aleppo, but there is no way I am just flying into a war-torn Syria. I took this challenge seriously and tried to do my best depicting the place I have never been. It is a very important topic and a story that needs to be told, and I am just happy to be a part of it.
That’s just one example, but yes, as I grow as a person and as an artist, I want to do more of meaningful things, and a project that I can really dig deep into.

As I grow as a person and as an artist, I want to do more of meaningful things, and a project that I can really dig deep into.

There are many heroes in many fields, so hard to pick one, or a few for that matter. Maybe Wong Ka-Wai  or Jean Paul Gaultier? I love their unique points of view.

As you may know, Japan is a very male-centric patriarchy society. It’s slowly changing, like anywhere else, but still, a long way to go. I grew up in the society and time when girls are raised expected to become stay home mothers. When I was growing up, even going to a four-year college was considered ‘making it difficult for a girl to find a husband’. I am GenX, so things started to change. I did go to a four-year college, but I was only one of 4 women in the whole class of 40.

As a kid growing up in Japan, any occupation was pretty much considered for men, other than maybe teachers, nurses and flight attendants. But then, there was a huge booming industry of girls comics (shōjo-manga), many of the creators are women. And women with thriving a career, huge respect, and even chances to build their own brand, fame and wealth. So, looking back, they were my heroes. Also, I read a fictionalized life of Shōen Uemura 上村松園 （１８７５−１９４９）one of Japan’s first leading female painter, written by Tomiko Miyao, also a leading female novelist. She accomplishes so much when women to have a career, art or otherwise, was so much harder. She had proven to the world that she can paint better than the best male peers of that time. You could find heroes. And though women have it so much harder, compared to them, I live in a privileged world.

It’s a fantastic field to work in. I guarantee it.

As a freelance illustrator who is a minority, female, and started my career much older than the most, what I can say is, in this field, nobody ever asks your age, gender, race, experiences, never ask to show your resume, or what diploma you have. Clients only care about your work, what you create, what you can provide for them, and how nice you are to work with. I can’t recall there ever was a situation that I had to feel self-conscious about who I am. It’s all about what I have created, and what I will be able to create.
It’s a fantastic field to work in. I guarantee it.