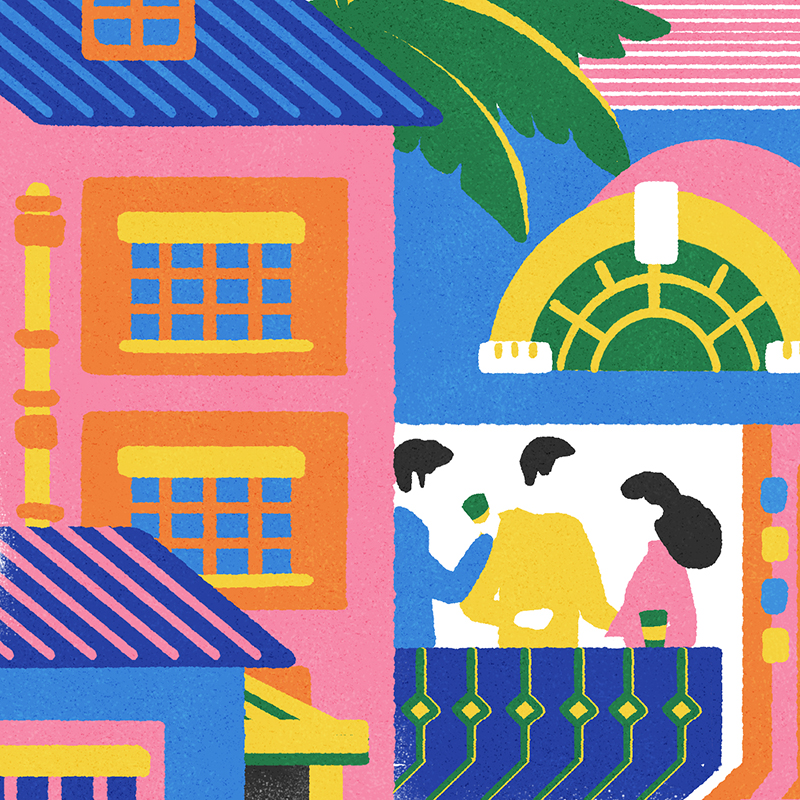 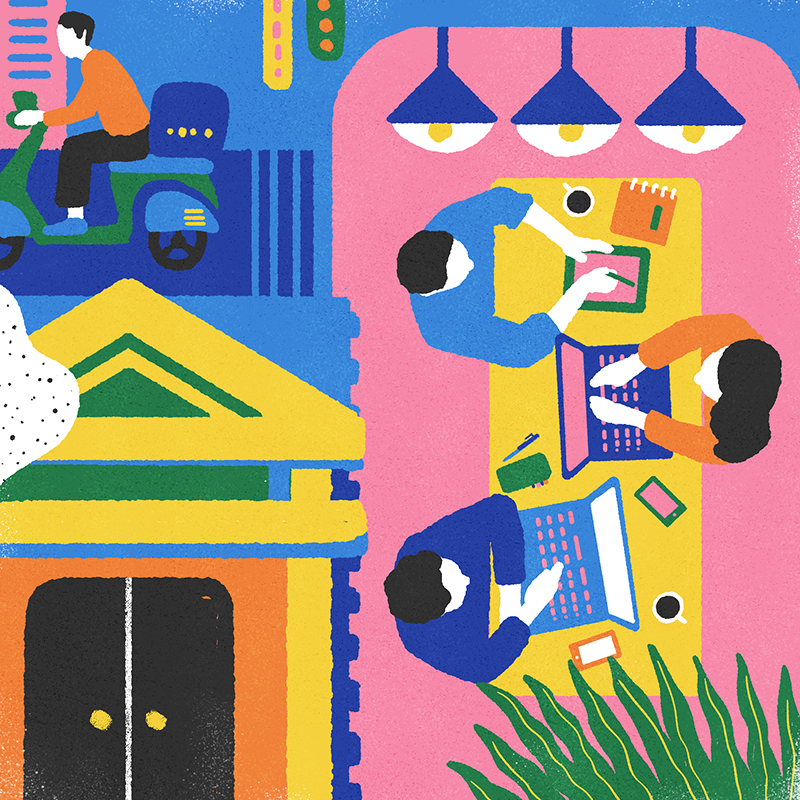 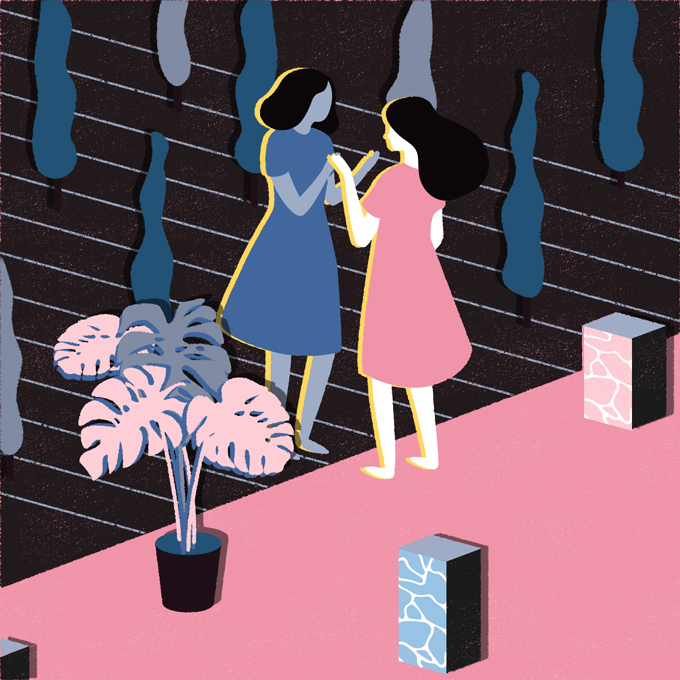 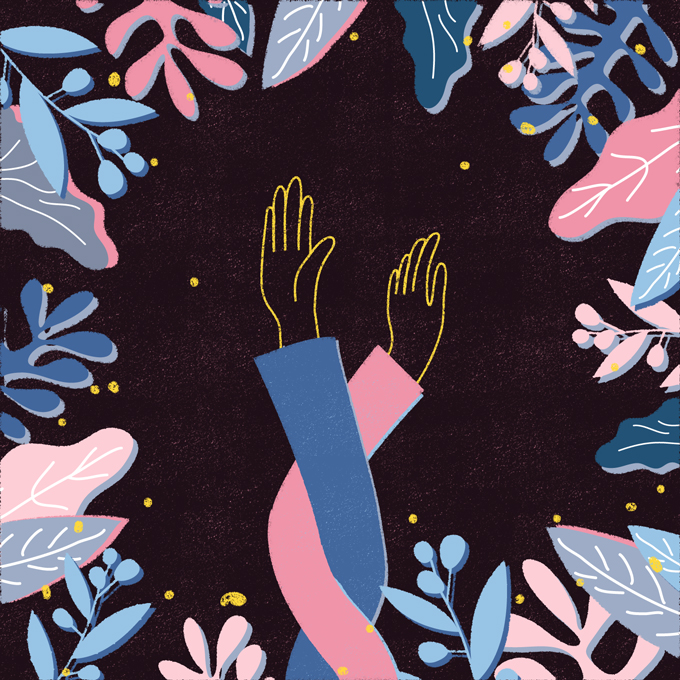 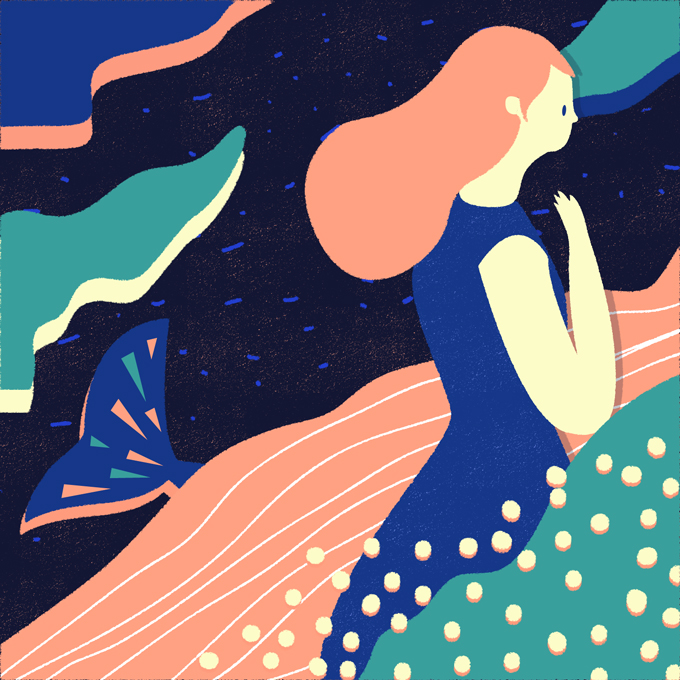 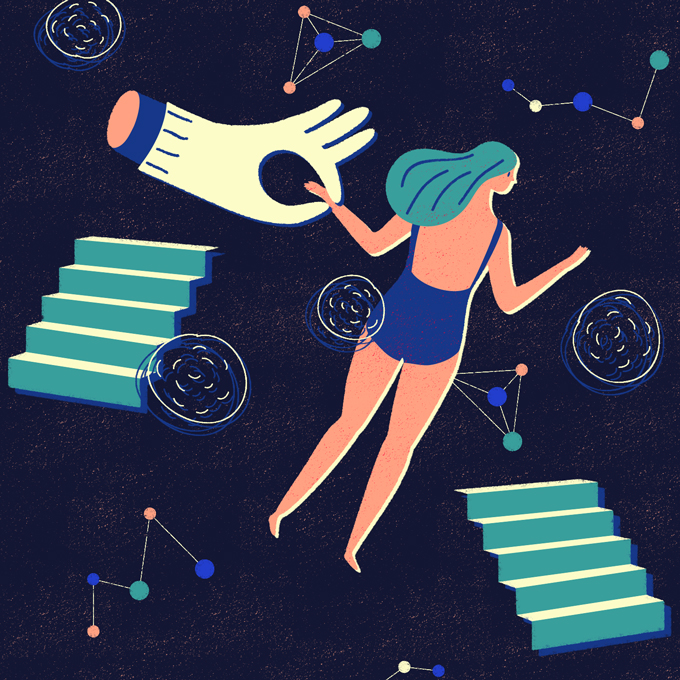 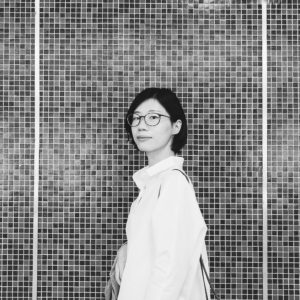 My name is Shengyun Mao, also known as “AMAO”. I am an illustrator and motion graphics designer and I am a native of Shanghai. After graduating from university, I went to Japan to study for my master’s degree, and then I stayed in Tokyo to work. After living in Japan for more than seven years, I resigned and returned to Shanghai and became a freelance designer. In 2018, I set up my own studio focusing on creative work in the field of illustration and motion design.

I have been away from Shanghai for many years. I lived in Tokyo, one of the most developed and convenient cities in the world. When I returned to Shanghai, I was very impressed with the great changes that happened to the city. In addition to its long-standing attributes of an international metropolis, Shanghai has become more convenient, more fashionable, and even more dynamic than Tokyo.

I still live in the home of the old city, in the area of Julu Road and Fumin Road. The streets here have become completely different from the environment I grew up to know as a child. There are many creative shops and entertainment venues which are now the favorite places for fashionable young people to go to.

The benefit of living in Shanghai is the convenience, and sometimes I find it even more convenient than Tokyo. I really like to live in Tokyo. Shanghai and Tokyo are both cities with a very fast-paced life. I feel a certain distance between people and I like this kind of interpersonal relationship under moderate distance. The bad thing is China’s air pollution problems all year round.

Shanghai and Tokyo are both cities with a very fast-paced life. I feel a certain distance between people and I like this kind of interpersonal relationship under moderate distance

I always liked to paint since I was a child. I studied at The Academy of Fine Arts University – Department of Digital Art. After I went to Japan, I also worked in the CG industry. I find this to be very hard and fast-paced work that lets you completely ignore your feelings towards yourself and personal life. But eventually, I started to create for myself. After I returned to China, I had a period of adjustment to consider what I really wanted to do with my life. I gradually found that I prefer to do creative work with painting as the main visual language. Through the creation of illustrations and animations, I found the desire to express myself. Although I still need to do more business work to maintain the studio, I am able to maintain my personal creations and slowly find the best balance between life and work. This is the biggest difference between me and my past in Japan.

Through the creation of illustrations and animations, I found the desire to express myself.

My friends are my loyal fans. They always respect the decisions I make and give me some spiritual support. I am very grateful to them. However, my parents neither support nor oppose what I do. They come from a relatively traditional generation, who grew up in the early days of China’s founding where they experienced the era of poverty and turmoil. Because of this, they want me to get a fixed income and a stable life. This is the difference between the values of the two generations. Although it is difficult to reach a certain consensus, my parents and I maintain mutual respect.

Also, I like to collect beautiful album covers, I also hope that I can have the opportunity to draw a cover for an album.

Michel Gondry. He is a genius.

Most of the women around me are friends from the creative industry. I think they are very great, especially women who have established families and have their own children.  They can balance family and career. They are energetic, and still have ideals. It really takes a lot of effort. Because I seldom see such women when I was in Tokyo, most of them become housewives after entering the family and gave up on their career pursuit.

Most of the women around me are friends from the creative industry. I think they are very great, especially women who have established families and have their own children.  They can balance family and career.

In the era of my growth, the internet is still not widespread. Information is still relatively backward and there were few opportunities to access the art of the apex.

But when I was in college, there was a female teacher who liked to collect a lot of movies/images. Because she had the opportunity to watch a lot of movies, some of our well-connected classmates and I always stayed in her studio to watch movies and we always had a lively discussion. That was the starting point for my interest in media art.

I think men and women in the creative environment in Shanghai are relatively equal. Most of my business work is in cooperation with advertising agencies. In Shanghai, the advertising industry is a really very fast-paced and high-intensity industry, I think the challenge for women is physical strength and work efficiency. Especially when I turned the age of 30 onwards, I really feel that my physical condition became more limited. It is not very advisable to stay up too late.

The advice is to be yourself and to keep improving. The other advice I can give is to not only to work hard but also to live well and have a healthy body.