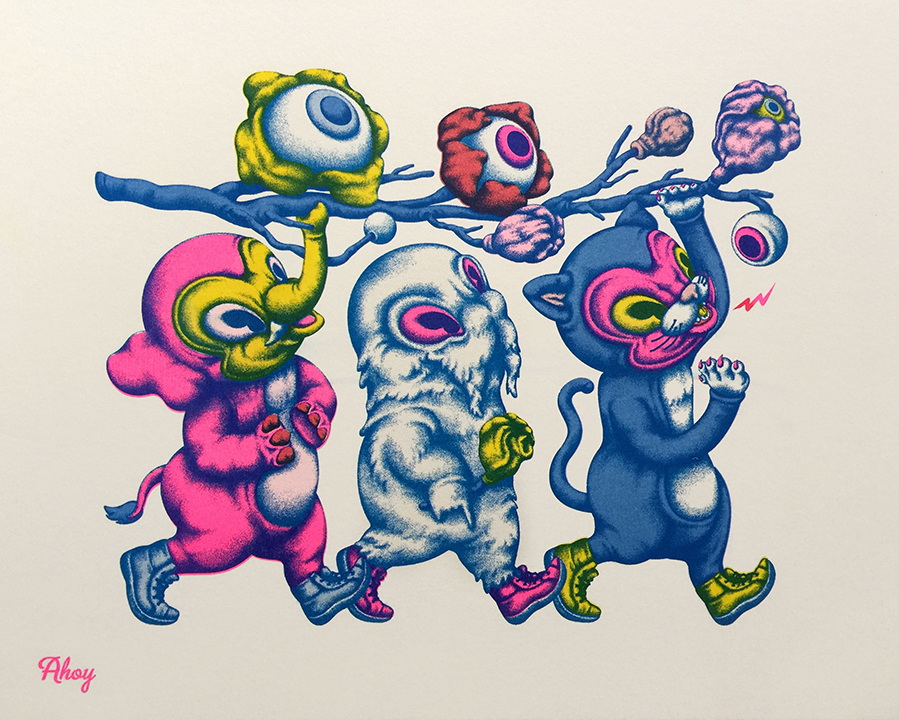 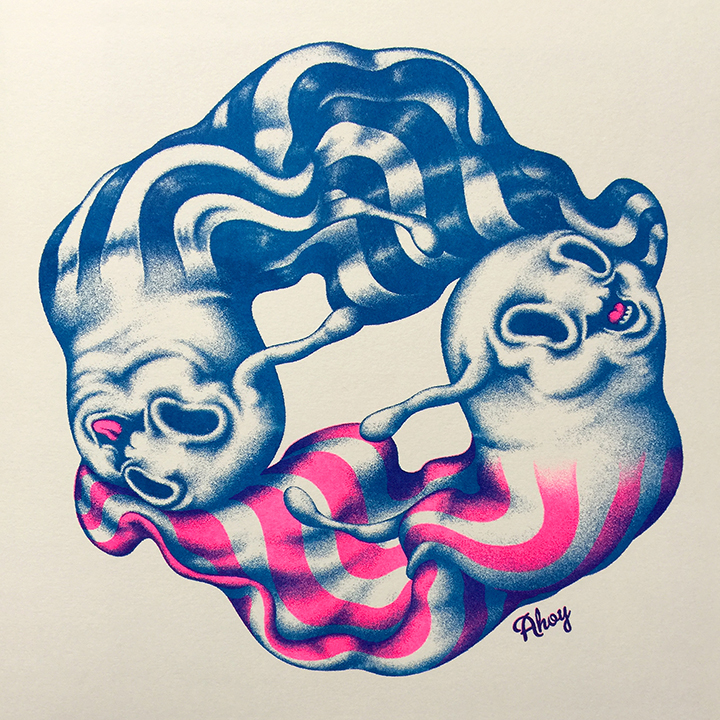 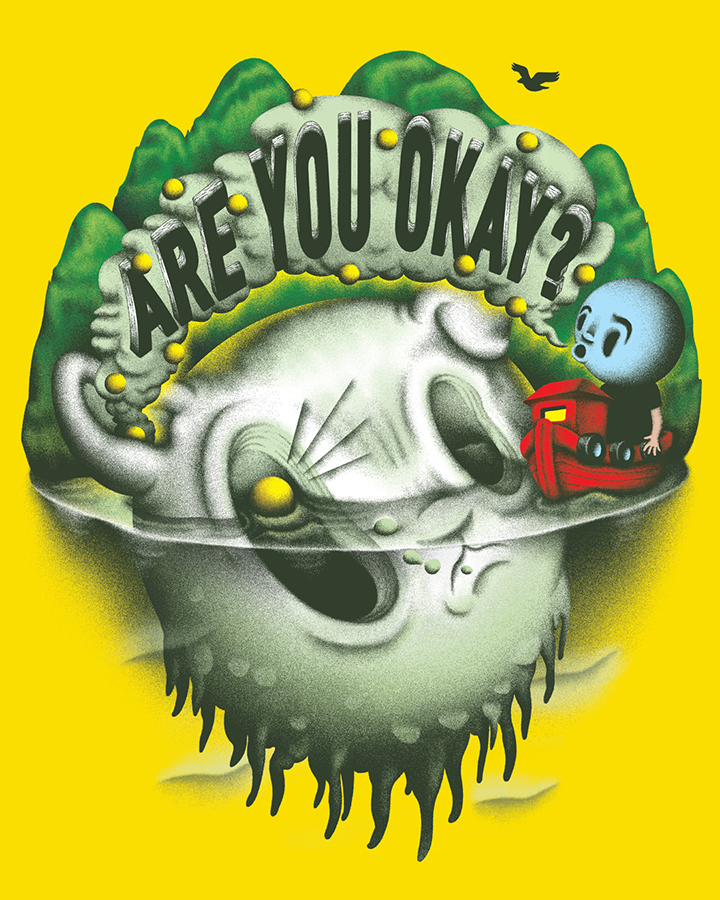 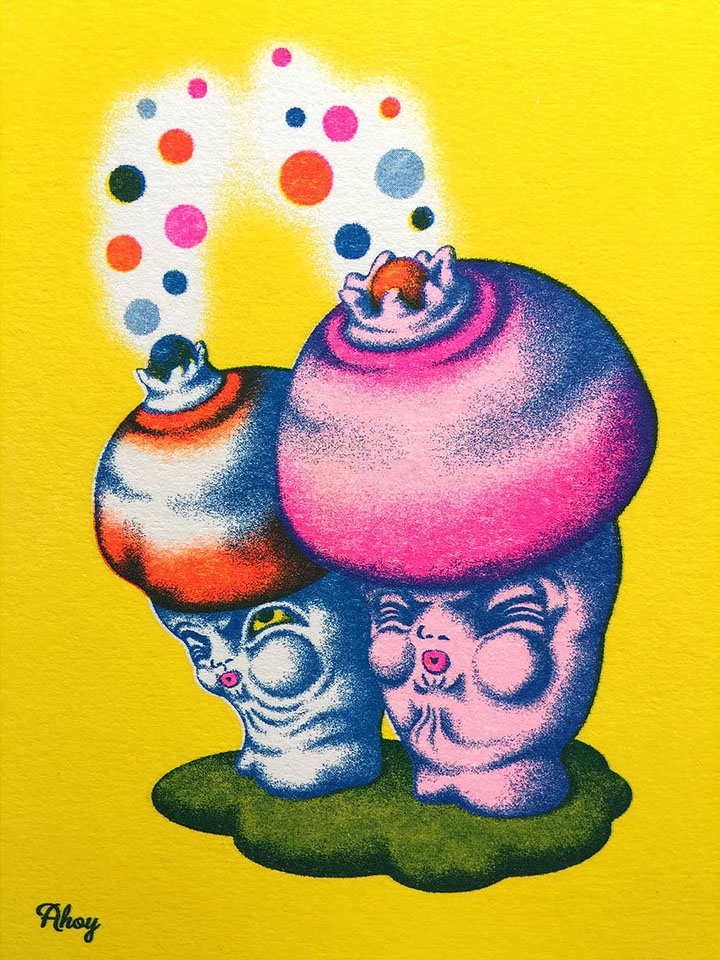 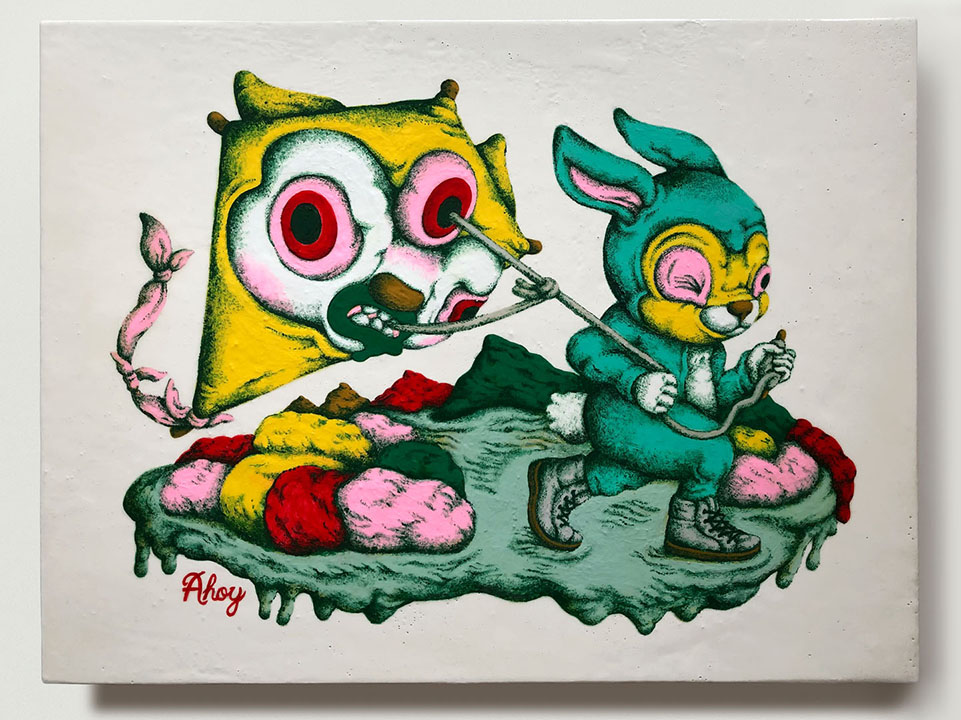 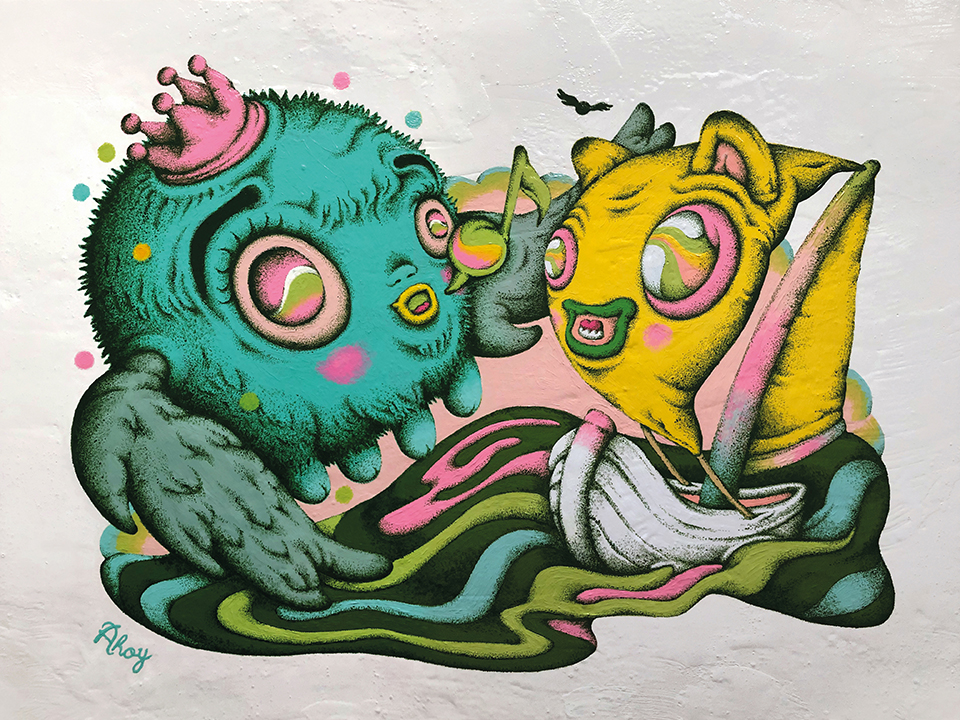 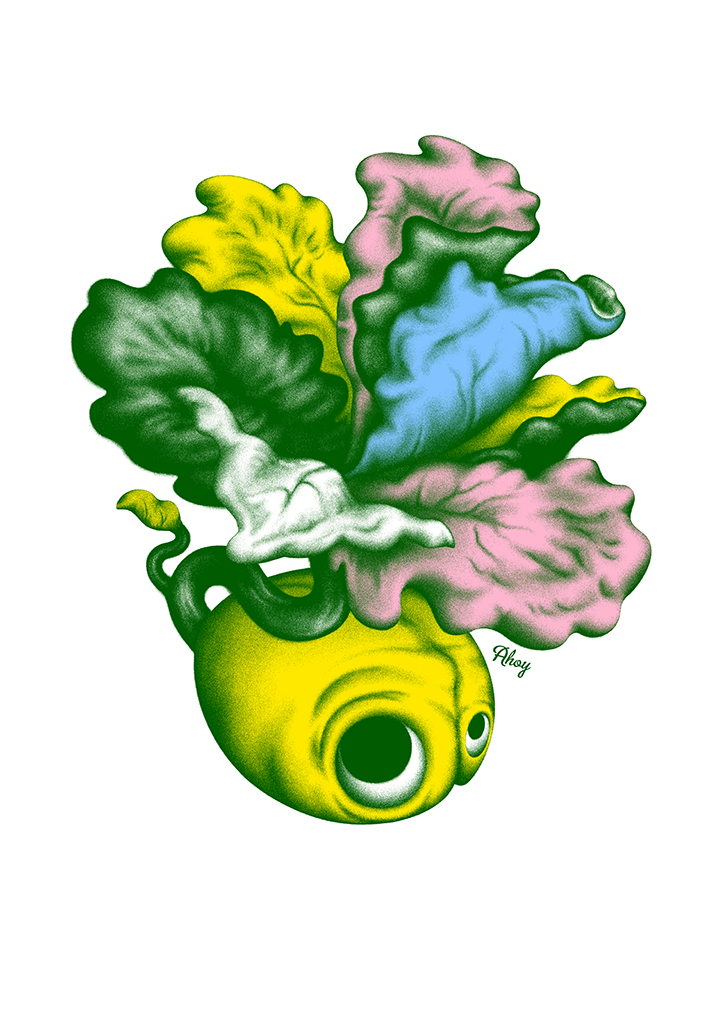 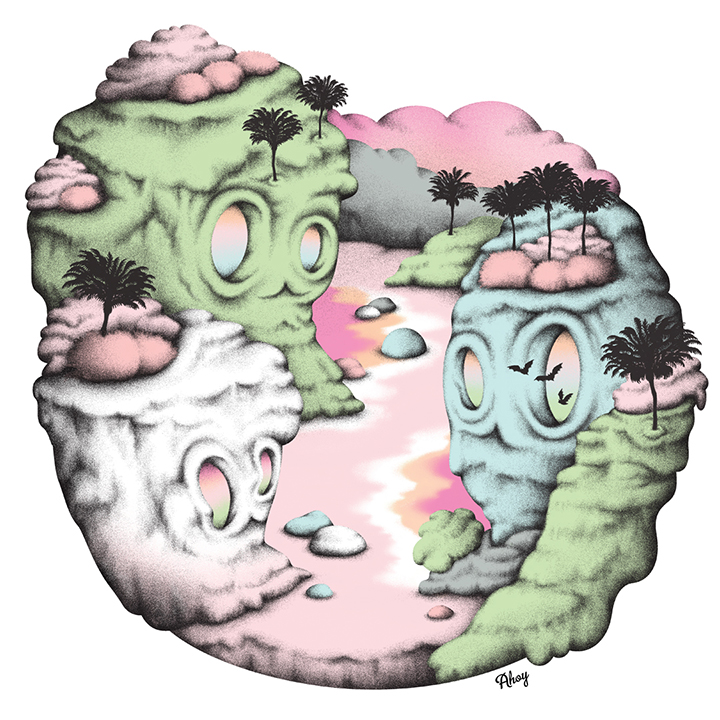 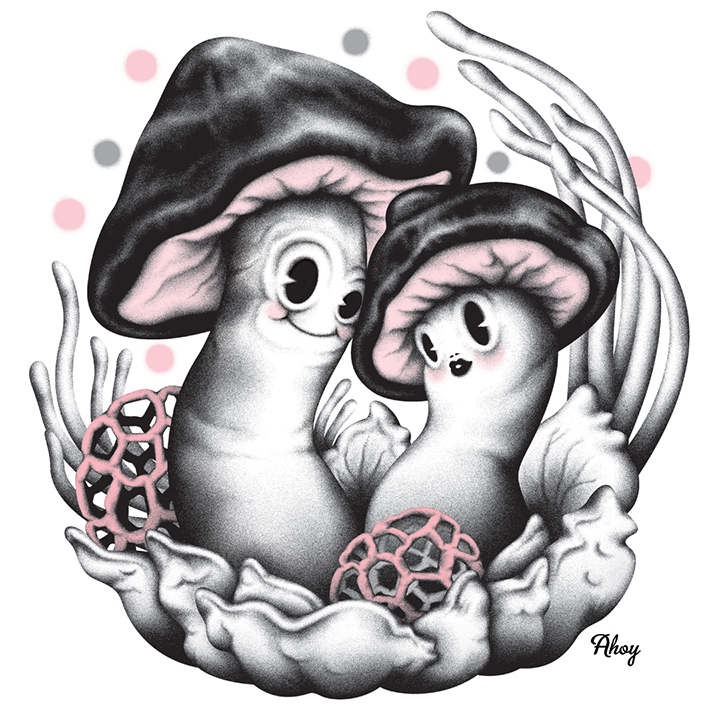 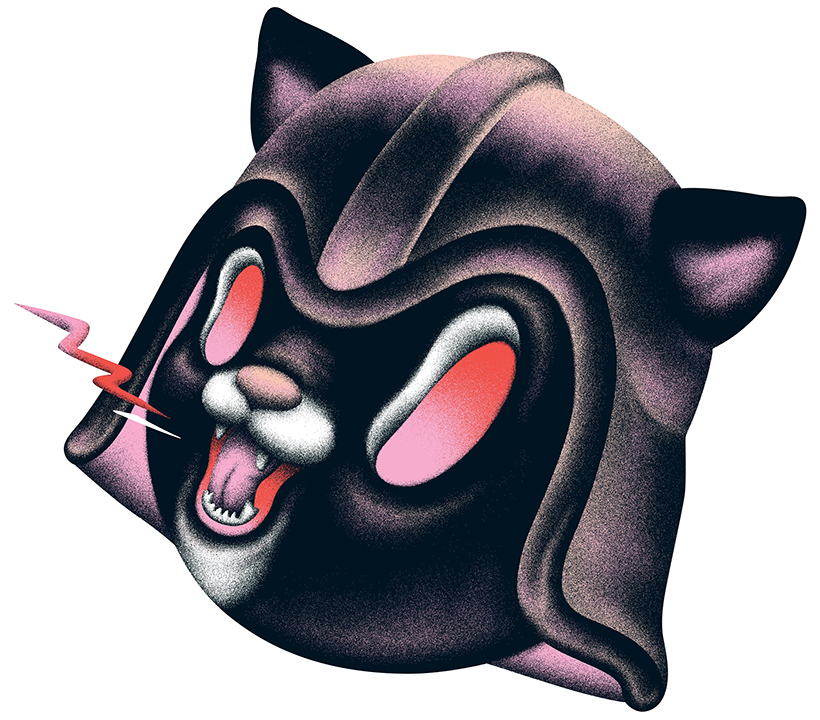 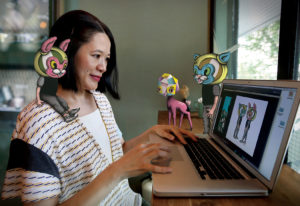 In my tiny home studio in Hong Kong, I make art and illustration. I moved here in 2008 from my hometown of Melbourne for a 4-month work contract designing information graphics. Twelve years later I am still here. I’m of Hong Kong and Chinese heritage, my mum left southern China and migrated to Australia when she was 14 years old and my Dad moved from Hong Kong to Melbourne to study when he was 17. It’s been interesting to see how my sense of identity has evolved in the time I’ve had living in this part of the world. I used to define myself as “Australian”, now it is as “Australian-Hong Konger”.
I absolutely love what I do. For commissioned illustrations, I work digitally, hand-shading with a stylus and tablet. My illustration clients are in different parts of the world but more recently the majority of my artwork is for North America with recent fun projects including a campaign for Slurpee and I just finished a project for a video game company there.
In the last 18 months, I began exhibiting with galleries in Melbourne and LA, Outré and Corey Helford Gallery and will be part of a group exhibition in Rome/London at Dorothy Circus Gallery in a few months. Art is a playground for me and I’ve been working with different mediums one of them being spraypaint. I painted a mural in Central Hong Kong for the HKwalls street art festival in 2018. I’ve also enlisted augmented reality as a tool and I have gone back to using a brush and paint for gallery shows – I’m really enjoying the messiness of paint and the mixing of colors, I like to imagine I’m taking part in a type of alchemy especially when it’s late at night and I’m listening to chill music and am lost in the romanticism of the stillness.

I live in the Sheung Wan neighbourhood of Hong Kong which is next to the Central district. Sheung Wan is full of cafes and street art, so it’s one of “those” neighbourhoods which is a cliché for a person who makes art to live in. Hong Kong has gone through an incredibly tough year with months of protests beginning last year. COVID-19 changed those dynamics in late January of this year.

The best thing about living in Hong Kong is its chaotic energy.

What is the best thing about living in your city?

The best thing about living in Hong Kong is its chaotic energy.

In 2015/2016 I took 9 months off to explore making artworks purely for myself without any constraints. I gave myself freedom to remember why I’d originally followed a creative path. I started using brighter acid colors and let my sense of humour come into my work. I started using the Ahoy moniker at this time as well. This was mainly because there was another Angela Ho in Hong Kong who was also an illustrator and I had the experience of being asked to invoice for some of her work. I did tell the client it must be the other Angela Ho though.

I really only began to think of myself as an artist when I had an exhibition at Outré Gallery in Melbourne as part of their Small Wall Project and when I was featured in the print edition of Hi-Fructose magazine last year, I was so surprised that they’d included me.

Having a base in graphic design and illustration has given me a broader perspective of creativity and given me skills I may not have gained otherwise.

Yes, my family have always been incredibly supportive of my choices. Since moving to Hong Kong I realise it is not the norm for Asian parents to support a child’s decision to immerse themself in a creative field. Many years ago when I was wanting to study fine art my older brother convinced me to study design. I appreciate his wisdom, having a base in graphic design and illustration has given me a broader perspective of creativity and given me skills I may not have gained otherwise.

I would like to work more with narrative, whether it’s with a still painting and somehow extending it elegantly with augmented reality or with a picture book or animation. I’d like to collaborate with people I admire too.

I would like to work more with narrative, whether it’s with a still painting and somehow extending it elegantly with augmented reality or with a picture book or animation. I’d like to collaborate with people I admire too.

It’s difficult to narrow it down to one person. I have a few people but here are two: N.K. Jemisin the science fiction and fantasy writer who wrote The Broken Earth trilogy set on a continent called the Stillness. The inventiveness, the characters and tone of the world had me reading the books one after another within several days. Every now and then I come across a writer of which I want to read everything they’ve written, I’m now reading N.J. Jemesin’s Emergency Skin. The second person is Taika Waititi. I loved his movie Jojo Rabbit and everything else of his I’ve seen and he seems to have a screw loose – meant in the most complimentary of ways.

Amazing! They are intelligent, thoughtful, creative, capable, practical, warm. I am very lucky to know them, I feel my life would have been very different and poorer without these friends/family in my orbit. When I had my exhibition at Outré Gallery three of my close friends travelled from New Zealand, Brisbane and Hong Kong to be in Melbourne with me!

I worked in a mid-sized advertising agency as a regular graphic design contractor in my twenties, the stable income then helped me develop my illustration career. It was in Melbourne. One of the Creative Directors was a woman, as well as one of the senior art directors and the accounts director on the account I was working on. I had a lot of respect for them all, all three had an ease and confidence about them which I admired, I think it was important for me to be influenced by these women early on.

Yes, payment. I am often wondering whether I have been given a budget that is less than it should be. These thoughts are based on many studies conducted worldwide comparing the pay rates of women and men. As there aren’t really strict rules about how artist/illustrators/designers should charge for a project it can be difficult to assess. I have a close friend who I confer with now about budgets, it’s good to be able to support each other in these matters.

Be confident, be bold, be yourself and not what you think others wish you to be.

Be confident, be bold, be yourself and not what you think others wish you to be. Find support in your friends and peers, talk with them, you will find that we all go through the same questioning of most things. Build a community around yourselves, it makes everything infinitely more wonderful.