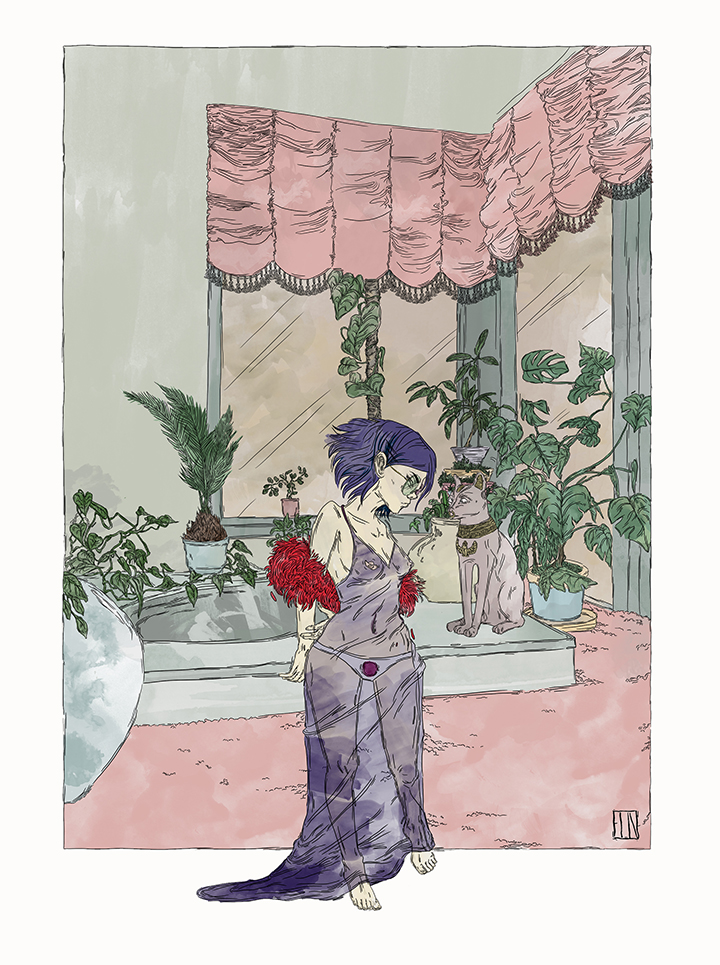 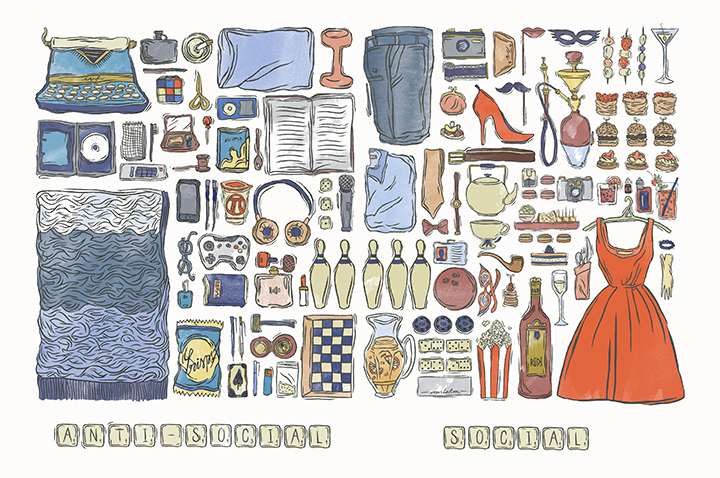 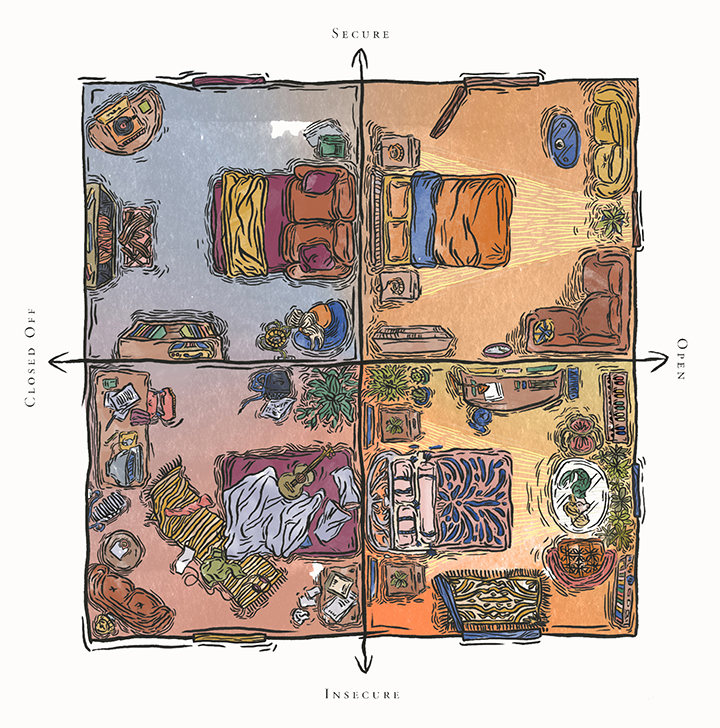 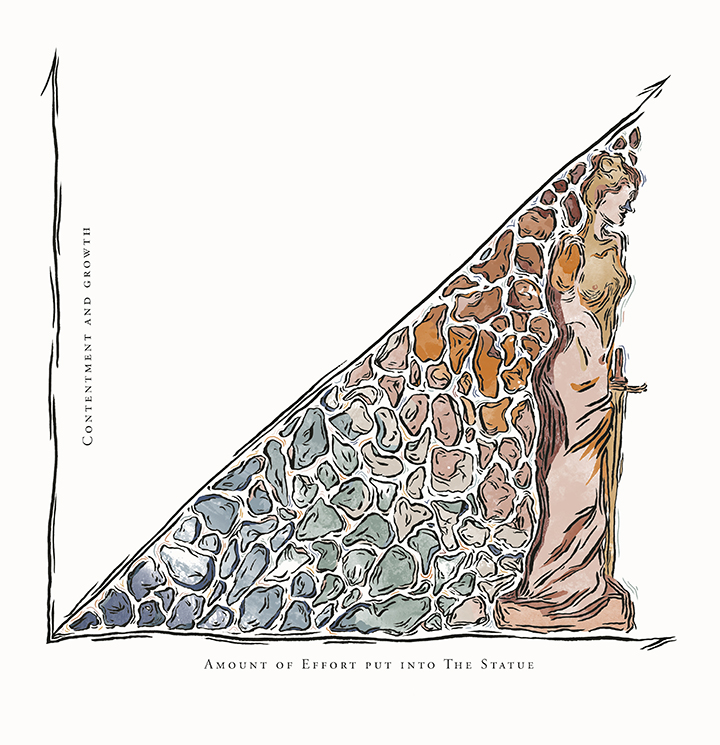 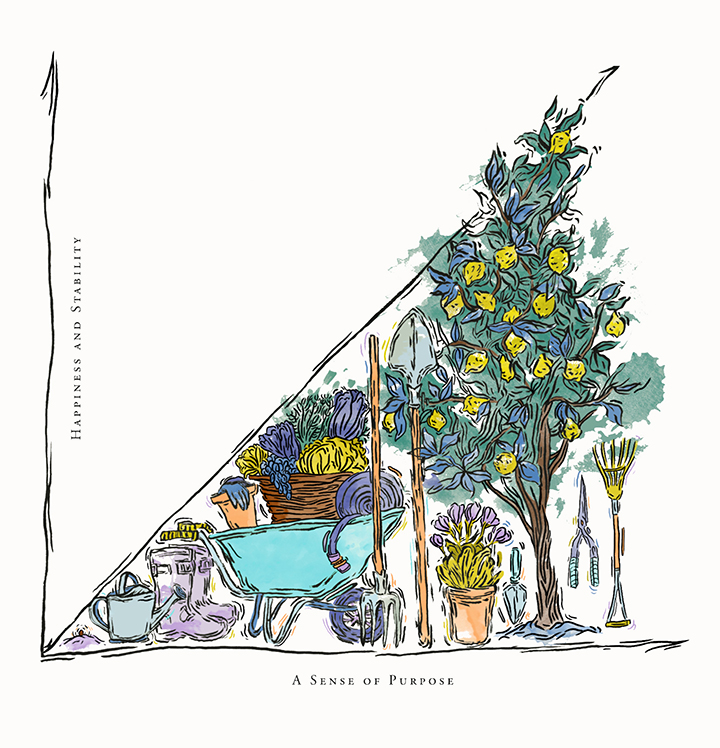 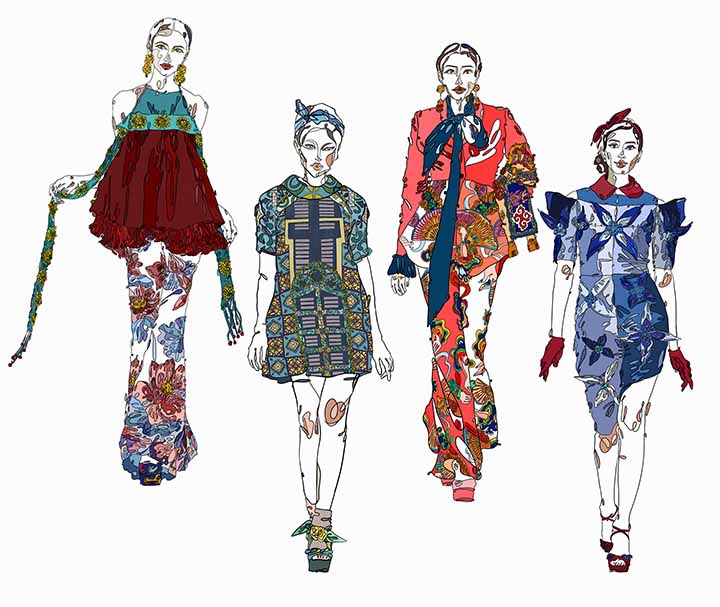 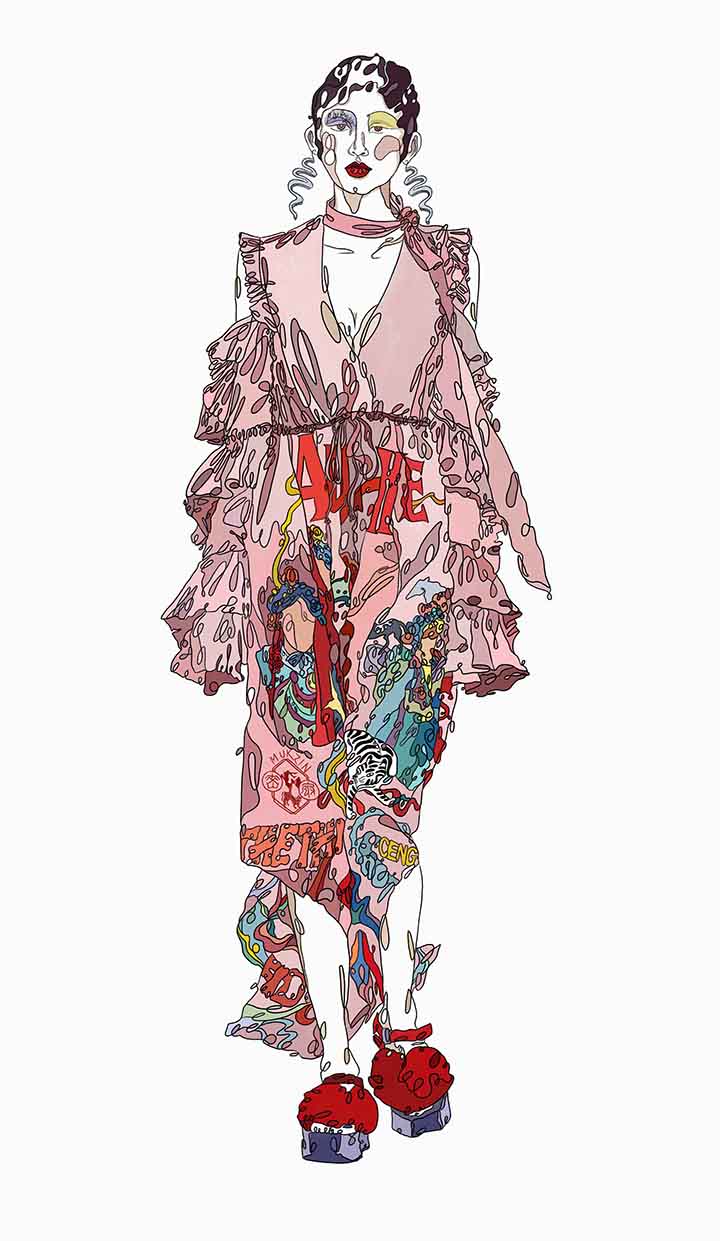 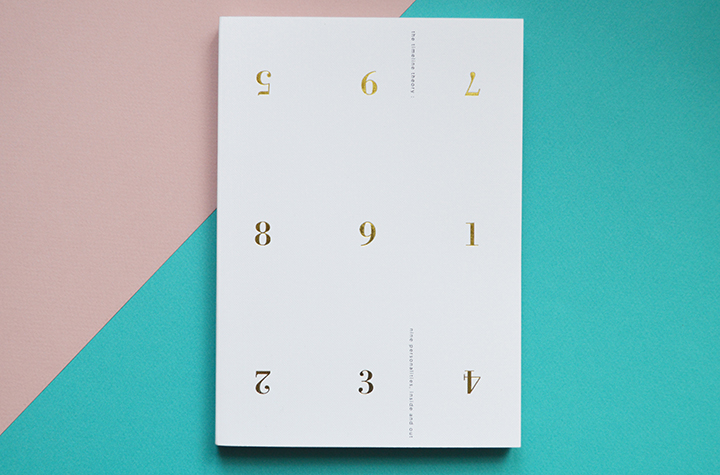 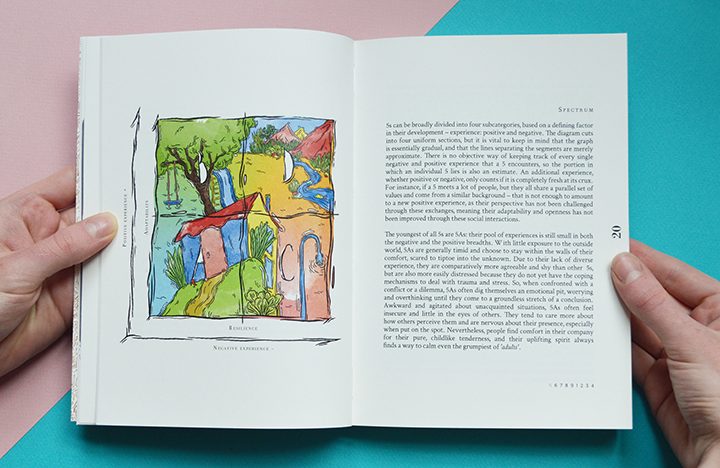 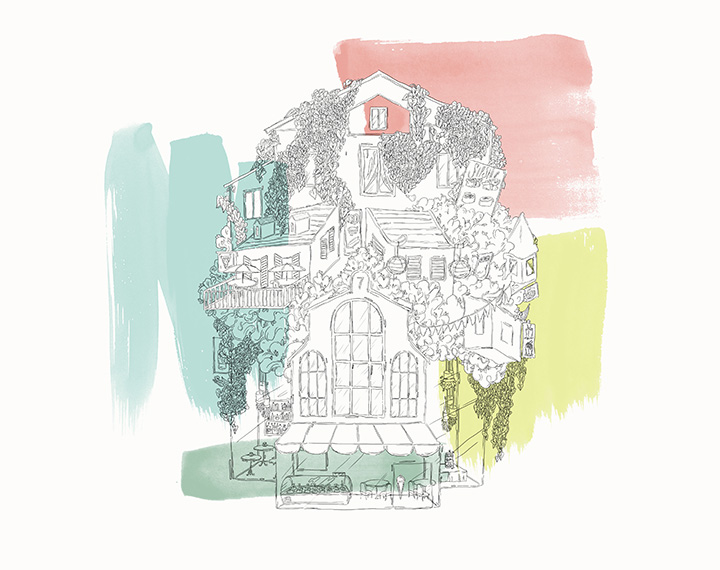 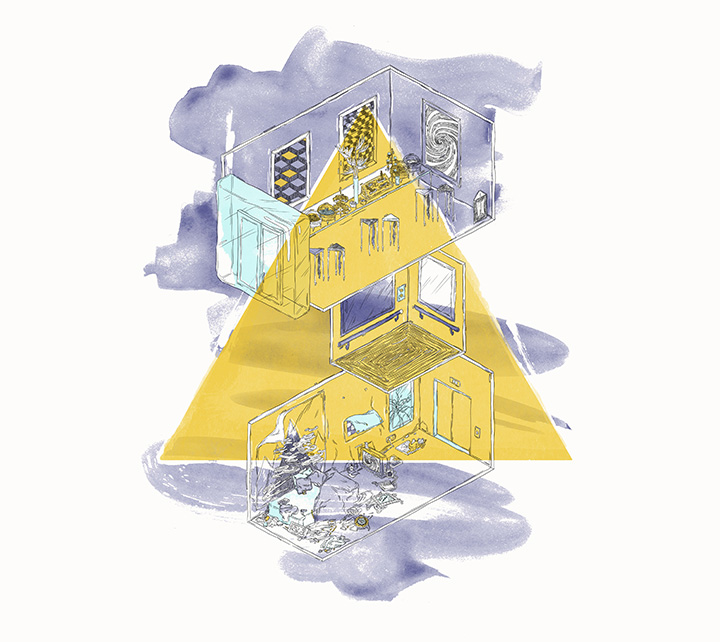 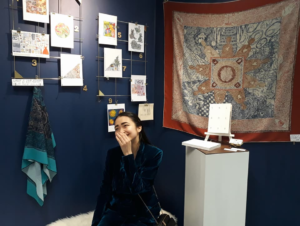 I am a part-time freelance illustrator who was originally born in Moscow, Mother Russia. Since opportunity has brought me all over the globe: I have gone to university in London, England and then, Edinburgh, Scotland; to finally find myself at a desk in Saigon, Vietnam, doing textile design and fashion illustration, among other accidental, non-related deeds.

Due to the inconsistent stays in various abodes, I have started to become inspired more so by people, rather than places themselves. Majority of my artwork surrounds my original philosophical categorisation system of nine ‘personality’ types called the timeline theory. Most of my artwork is inspired by my original philosophy, the timeline theory, which is a system that arranges individuals into nine “personality types.” My artistic voyage, however, explores the ways in which complex data and abstract concepts, such as emotional affect and brain systems, can be visualized and made accessible to just about anyone, through infographics.

Recently, all of the knowledge and personal research that I have done over the past nine years has coalesced in the form of a book that I have designed, written, and illustrated. The Timeline Theory: 9 Personalities, In and Out is a brief outline of the concept, the first book in its collection. Hopefully, there is more to come.

When I am not preoccupied with my research, I do commissions of all sorts, dabble in fashion illustrations and other absent-mindedly enjoyable drawings.

I have resided in a handful of places during my lifetime but for now, life has brought me to Ho Chi Minh City. It is a dynamic place, that generates energy from its chaos. It embodies a kind of perfect fluidity that is evident in the traffic system, its language, and its people.

For someone who was not raised in this fine-tuned clock, which runs on mayhem, I can often feel like a pebble, jamming its long-established perfect disarray. The traffic system here is sort of an ideal representation of that; scooters, cars, bicycles, carts flowing in and out, like a stream of a river, simultaneously spontaneous yet smooth. One has to keep moving and have trust they won’t get hit.

I am yet to learn to trust.

People in Vietnam are genuine and soft-hearted. A longing for intimacy and closeness seems to be coded in their DNA. It is more likely that a long conversation will be struck between me and a taxi driver here than anywhere else I have lived. If you are a fan of warm human contact, this may be the place for you.

As someone whose Vietnamese is not up to par, yet is visually perceived as a native, I often find myself in awkward situations. Despite the overwhelming friendliness and intended kindness, it can often feel like people are too distracted by my second-rate pronunciation, to focus on the content of what I am saying.

My experience here has been neither positive nor negative but has consequently made me better comprehend my character, as well as the general relativity of life in different places. Vietnamese culture is intrinsically free-spirited; its existence is not bound by the concept of time which means people have no problem postponing meetings, coming and going as they feel suited. The following encounters made me reflect on my own impatience: what is viewed by me as a ‘waste of time’, here is just…waiting.

People in Vietnam are genuine and soft-hearted. A longing for intimacy and closeness seems to be coded in their DNA.

As cliché as this may sound, I was one of those ‘artistic’ people in school who scribbled in margins and who everyone in the class would want in their group when it came to making posters. Teachers found me distracted, unable to fulfill my full potential due to my fleeting, ‘creative’ mind. My friends found me entertaining to sit next to. I do not know if this is exactly the story of the start of my art career but this is how my fiddling tendency has grown into an interest that ultimately grew into pursuit.

It did not start off serious at all: some tattoo designs here and there, drawings to be gifted to family and friends, a couple of long-term commissions during my time at university. I suppose it is still not too serious… On paper, my artistic career looks scattered. Regardless of my self-perceived consistency, I have graduated with a degree in illustration but, to make ends meet, have accepted many jobs in interior, graphic, and web design.

Perhaps, the only consistency is my drawing style which due to its individualistic nature, has made it rather difficult to get hired as an in-house illustrator. As for the freelance scene: in this country, it is a newborn ghost yet to truly materialize and develop.

I do not know if this is exactly the story of the start of my art career but this is how my fiddling tendency has grown into an interest that ultimately grew into pursuit.

It was a classic situation that I am sure a lot of other artists have gone through, particularly, Asian ones. My parents have gently pushed for: mum, for management – dad, for business. “Or at least, economics,” he said. I submissively took those subjects before the sixth form, only to later rebelliously show them that it was no use. Slowly, it has become increasingly obvious to all parties involved, that art is where my passion and focus laid. So eventually, they, too, ever-so-hesitantly caved into accepting my path.

Now-graduated, I am still not sure they feel like they made the right decision; but I am, as Edinburgh is where I met my extended illustration family. They are individuals who have helped me further my artistic pursuit, theory, and mind… They are my creative support system. As for everyone else grounded in reality, they have not shown any distinct opposition, just tender indifference.

The entire process of writing and illustrating the first book was tiresome yet rewarding in its fruition. So I would like to self-publish more volumes in the future; this time around, with less tight and urgent deadlines that gave everyone involved, a headache. However, for now, I would like to focus my time on transcribing my notes on the theory, as well as relearning how to properly speak, in the hopes of eventually starting a podcast (no guarantees yet) on the subject of the timeline theory.

As far as my illustration career is concerned, I aim to post more of my artcummulations in the months to come…

A frequent kind of presence on Instagram has always been a struggle for someone with an itch for mismatched shades and layouts, such as myself. As much as I would like to chronologically share my life in the flavours that it comes in; doing so is difficult due to my nagging perfectionism. So currently, I am working on remedying that faux pas. Tune in for more of these dotted adventures to the top of Mount-“I am a Professional Illustrator Now.”

The ideal collaboration for me right now would probably be with the animator, Shane Dering, whose work is smooth and crisp and makes my eyes heart-shaped; lines – confident.

Having said that, I am open to joining forces with just about anyone whose heart is in the right place so do not be shy. I would absolutely love to meet new people who I can talk to, collaborate, and work with in the future on this manifesto. So if I sound like your type of human thus far, feel free to drop me a line.

I cannot find a single word to describe all the women around me. The range is diverse: from gentle, sweet to mighty, fierce; they all possess an individual type of charm and strength I have come to admire.

My mother and grandmother suffer from a mild case of contradiction. They strive to rid themselves of biases regarding gender roles (amongst other things) that have neatly been ingrained into them by society, but often get caught up in good old habits. Nevertheless, I tend to appreciate their efforts to be flexible. I believe open-mindedness is worth a try, for everyone, almost always.

Whether it is due to the individuals who have accidentally fallen into my inner circle or the development of time, it’s delightful to see the increasing support women have for one another; a quiet kind of kindness that comes and goes uninvited.

I cannot find a single word to describe all the women around me. The range is diverse: from gentle, sweet to mighty, fierce; they all possess an individual type of charm and strength I have come to admire.

In some ways, I am thankful to have grown up in Russia, despite its many shortcomings. One thing that place has given me is a relentless appreciation for the arts, of all kinds. I was brought up with the works of so many colourful soviet children book illustrators and traditional animation. Granted, the majority of them were male, I was still introduced to the likes of Elena Polenova, Francheska Yarbusova, Vera Pavlova and Kate Bayley.

Though the exposure was not overflowing in numbers, the quality of these women’s work set an elevated standard for detail and fullness of imagery.

Graciously, there haven’t yet been any obstacles, for me, regarding gender in Vietnam. But what may sound like a generous lack or absence of discrimination, exposes discrimination of a different kind… It is true that given a suitcase of age-found wisdom and life experience, one is bound to be unconditionally respected regardless of appearance, gender and sexual orientation. However, without said time on earth, it is unnatural for those who are older and in position of power to speak to young people without accidental condescension and command-like tone.

Here, unfortunately, the chicken very much comes first. Not the egg.

I think it is essential to remember that it is not a competition but a mutual walk that is curved for all of us.

The greatest advice I could offer is ‘support one another’. The art industry on its own is already such a hard climb; there is no need for women to spit on one another on the way up. I think it is essential to remember that it is not a competition but a mutual walk that is curved for all of us. Share the work of artists who are starting off and are still learning. Let go of all jealous and bitter thoughts about the successes of others, instead lift each other up with plenty of likes and lengthy comments on Instagram.

We are already fighting the algorithm, so let’s not each other.

Besides that, stay true to your artistic vision. Whether particular or inconsistent, there are no rights or wrongs in art.