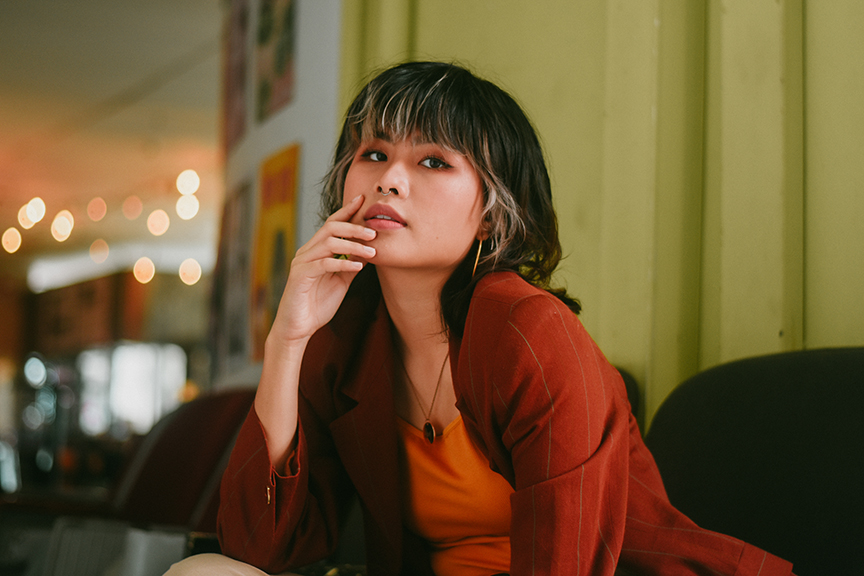 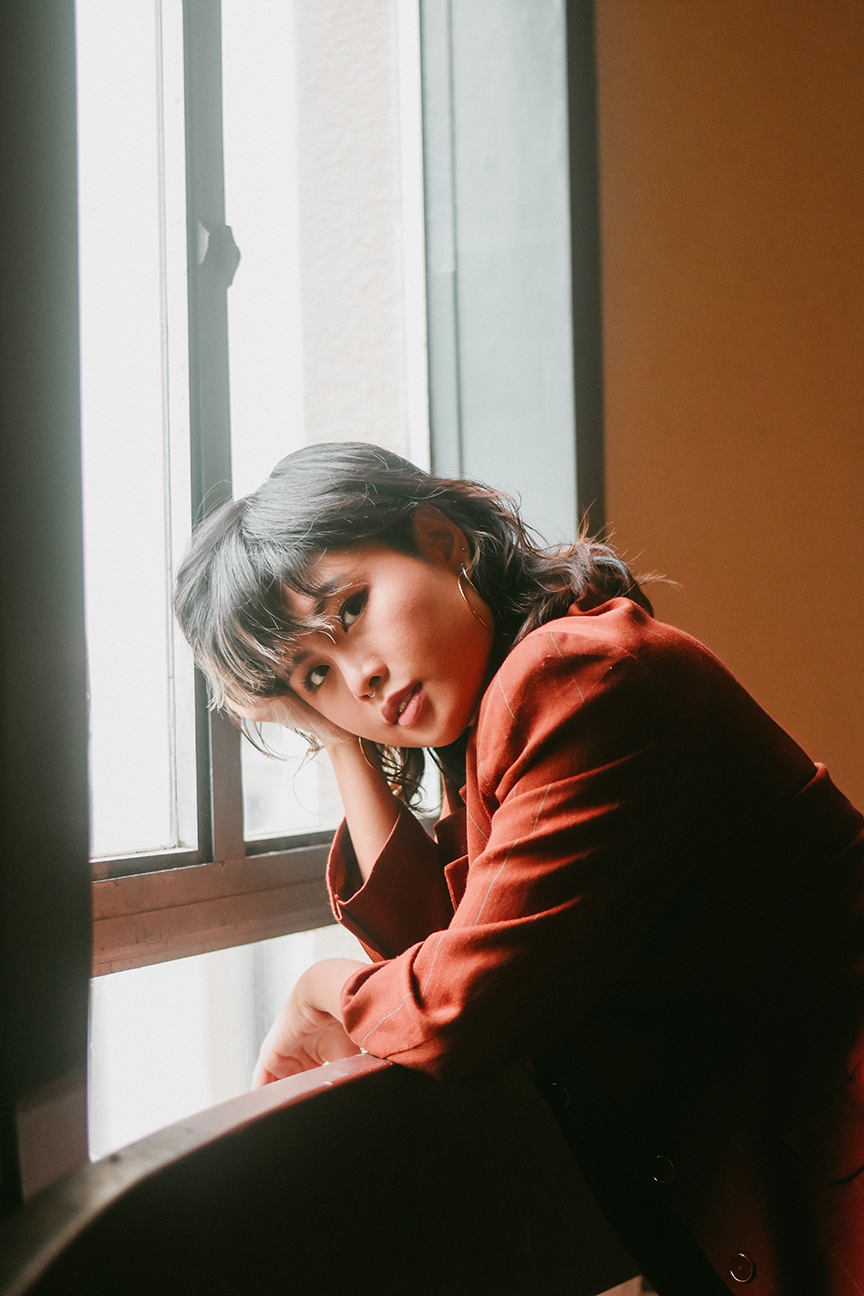 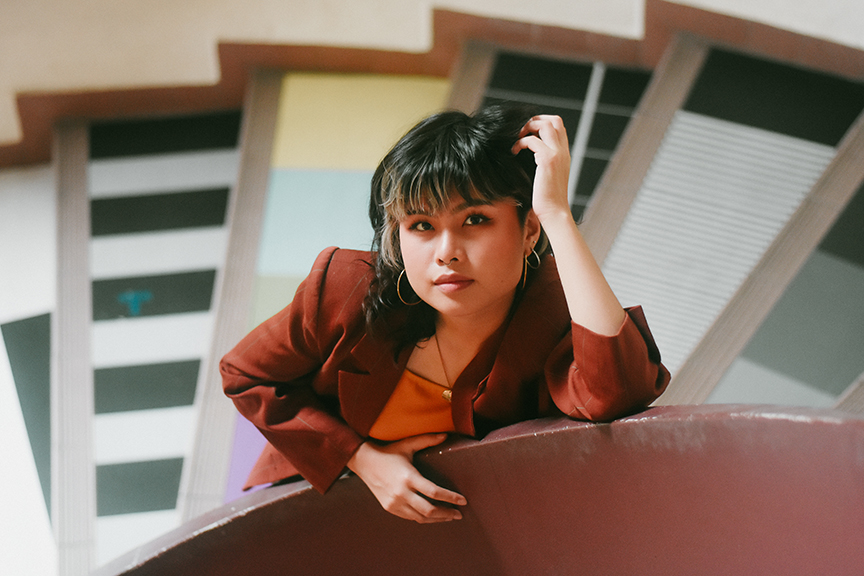 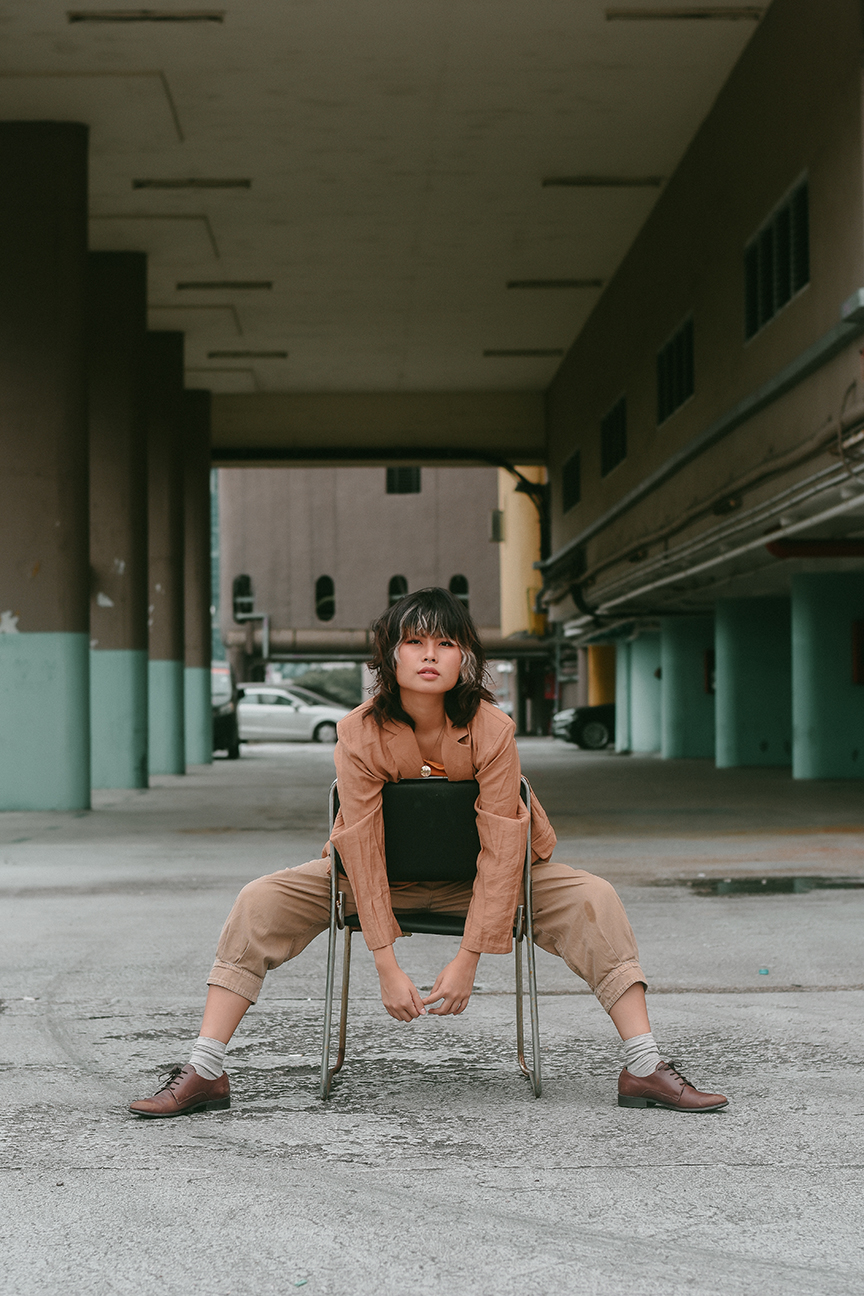 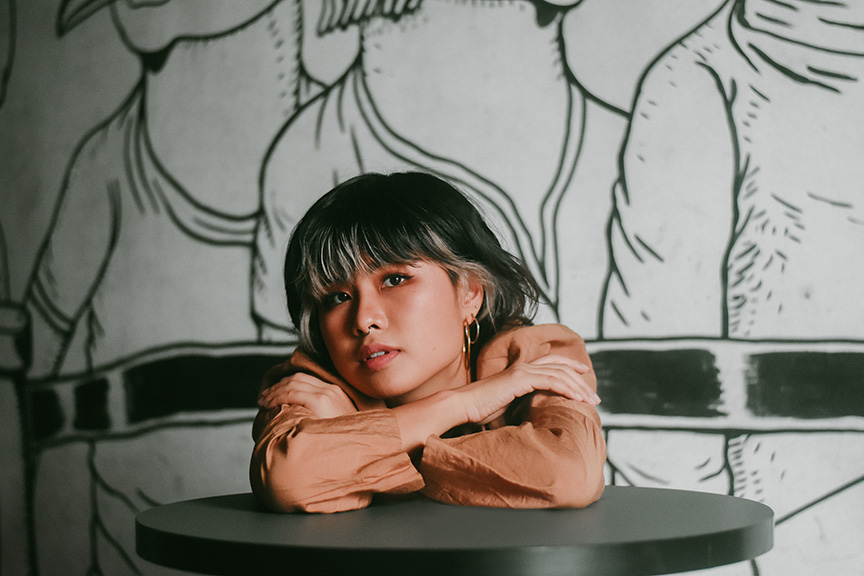 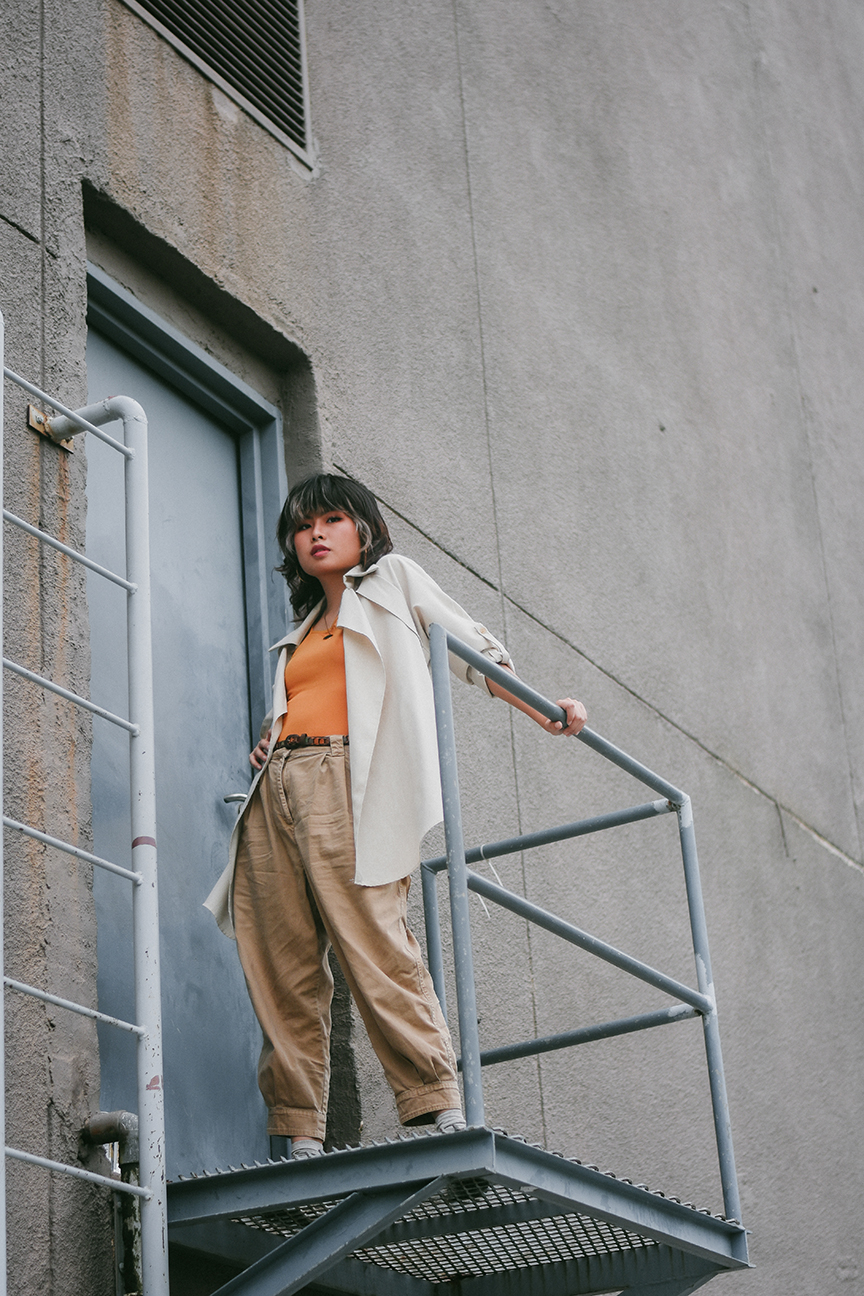 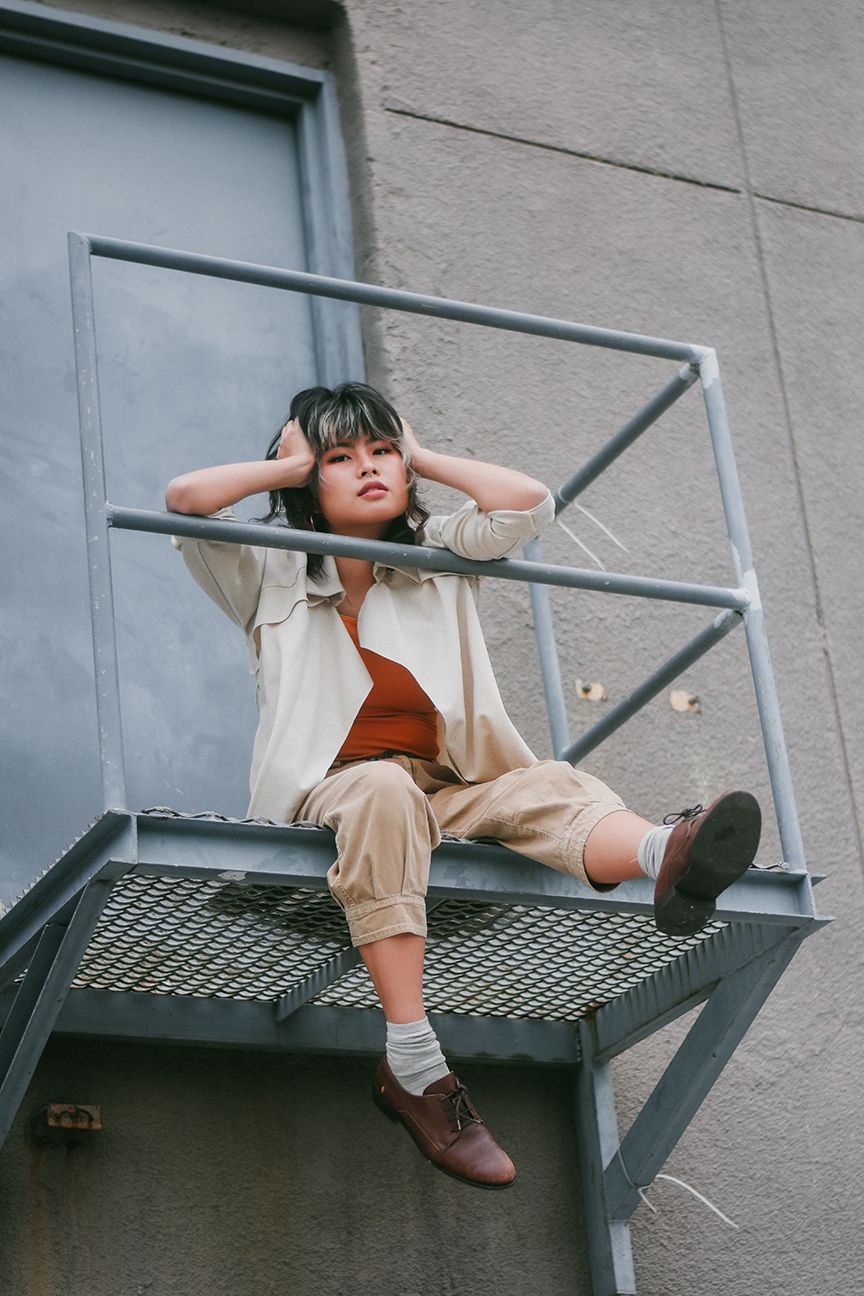 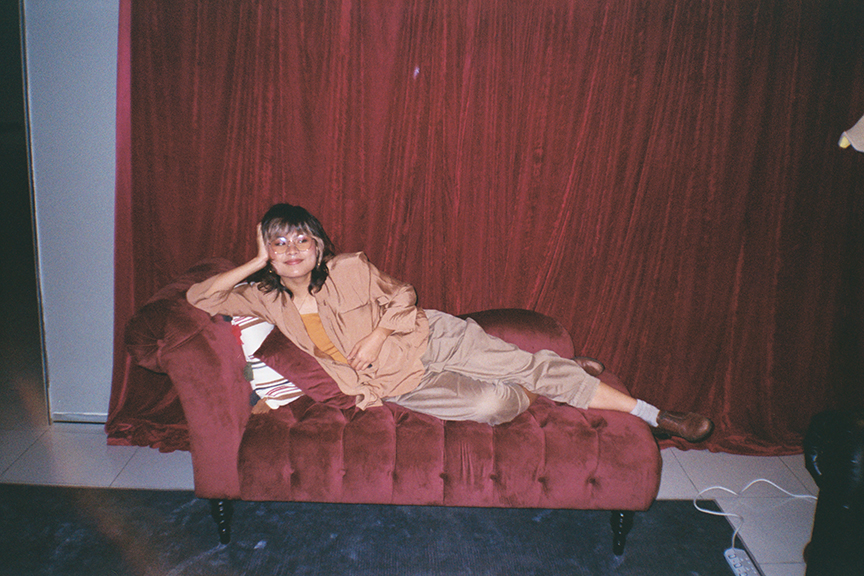 Hiya! My name is Marian, nice to meet you! I’m a singer-songwriter. During my time in isolation, I’ve been listening to a lot of Bruno Major, Eloise, Sabrina Claudio, and other extremely talented R&B/Soul artists. Their storytelling and musicality inspire me so much, and my upcoming project is shaping up to be heavily influenced by them.

Apart from doing music, I’m taking a degree in Arts Management at LASALLE College of the Arts here in Singapore. I’ve met a lot of great people here that I’m proud to call my friends.

On the very rare occasion that I have a day to myself, you might find me pole-dancing, swimming, binge-watching queer eye until I cry, or all of the above in succession. I’ve also been learning how to speak Bahasa Indonesia!

I have a little fluffy companion, a miniature schnauzer named Heidi – my style icon who always has the best hair days. One can only hope to be so effortlessly put-together.

Singapore is a tiny country, and though I’ve spent 18 years of my life here, I always find myself discovering something new each time. Though I must admit, it’s a lot more difficult to do so under the blazing equatorial sun. The cloudy days are the best!

Where do I even start with Singapore? She’s beautiful, she’s diverse, she’s got so much going on for her. Singapore is a little bit of everything within a small space. I walk along Bugis to find beautifully crafted Turkish coasters, cross a few streets, and find myself in the heart of Singapore’s Thai community, wolfing down a serving of my favourite raw prawn salad at Golden Mile Complex. I take a bite of the spiciest thing I’ve ever had in my entire life, without feeling so much as a cramp in my calves from walking.

Where do I even start with Singapore? She’s beautiful, she’s diverse, she’s got so much going on for her. Singapore is a little bit of everything within a small space.

One thing that I don’t take for granted is safety. I’ve lived a few years outside of Singapore, and here is the only place I would dare to walk alone at night. Here is where I learnt independence and freedom, all because my family knew I’d be safe if I travelled in the island by myself.

During the pandemic, a lot of cracks showed, and the underprivileged suffered the most. Though Singapore is well-equipped and great at putting out fires, I can’t help but wish we had paid more attention to those who needed help, well before they were greatly affected.

I’ve been writing songs since I was 11, after seeing Camp Rock (yes, Demi Lovato and Joe Jonas were the catalyst of my music career), but only started to pursue becoming a recording artist in 2016. That year, I joined the Noise Music Mentorship Programme, entered a lot of competitions, and really pushed myself to get better at performing and songwriting.

I was a busker a little bit before that, and I continued busking until 2019 in order to fund my studies. Earlier this year, I joined The Great Singapore Replay, and was mentored by one of my biggest inspirations, Charlie Lim. I don’t think I’ll ever be so lucky as to experience anything like that ever again, having as much support for a full-fledged campaign and songwriting camp that showed me the process of writing and releasing music from start to finish.

I’ve been writing songs since I was 11, after seeing Camp Rock (yes, Demi Lovato and Joe Jonas were the catalyst of my music career), but only started to pursue becoming a recording artist in 2016. That year, I joined the Noise Music Mentorship Programme, entered a lot of competitions, and really pushed myself to get better at performing and songwriting.

Not always, especially at the start of my career. Though my parents came around eventually and started supporting me after seeing how much I loved music. With a lot of determination and on-brand Taurus stubbornness, my parents started to understand how important and fulfilling songwriting was to me, especially after I started placing in competitions and performing my own songs. Nowadays, my mom is one of the biggest cheerleaders I have, though she sometimes has a funny way of showing it.

My music has always leaned towards vulnerability, and it’s very important to me that I am bravely honest about the things that I write. I hold my songs very close to my heart, and though it is terrifying to put so much of myself in my work, I do so in the hopes of other people finding some light while listening, as I did while creating. I guess what I’m saying is that all I want is for my music to make an impact on at least one person’s life.

My music has always leaned towards vulnerability, and it’s very important to me that I am bravely honest about the things that I write.

I would love to collaborate with Jacob Collier, just because I think I would learn so much from him. He is so talented, and his mind operates on a totally different level. I probably won’t understand most of what goes on, but I’d just be honoured to share the same space, let alone make music together. Heck, I’d be happy to just get him coffee.

In my family, I am closest to my sister. She is my best friend, and the best housemate anyone could ever ask for. She makes the best meals, and I type while hungry just thinking about them. My sister loves fiercely and generously, and would do anything for the people she cares about. I’ve always admired that about her – how she can generate so much love in such a small body!

My sister loves fiercely and generously, and would do anything for the people she cares about. I’ve always admired that about her – how she can generate so much love in such a small body!

I really admire Ginny Bloop, she’s the frontwoman of one of my favourite bands in Singapore, The Steve McQueens. The music she creates is so uniquely her, that you’d recognise it from a mile away. After years of listening to her stuff, I found out that she taught vocal lessons, and I started going for classes with her. I was so starstruck! She taught me a lot about getting to know my voice, and being comfortable and confident with it. I used to hate my own voice, but she showed me how much I could do, and I’ve grown to love my voice for what it is.

I guess that bled over to other aspects of my life, and Ginny’s infectious vibrance has always inspired me to embrace who I am unapologetically.

For sure! I think gender norms are something that can be imposing. There’s a certain pressure to look, present or act a certain way when you’re a woman (the same can be said for men too).

I feel like women, especially in the entertainment industry, are expected to wear makeup, or have certain body types, amongst many other things. On a day I decided not to wear make up for soundcheck, the organiser of the event came up to me and asked, “you’re going to wear make up for later, right?”.

As a queer artist, it was difficult for me to shake this expectation off and fully express my gender identity. I kept my hair long and wore skirts and dresses on stage, even though you’d find me in pants everywhere else. It can be easy to feel like you owe people a duty to look a certain way, but it got tiring for me and I was so unhappy and uncomfortable. When I finally decided to cut my hair and started wearing what I wanted to instead of what I thought I needed to, I felt so much more at home in my own body.

Here’s a piece of advice that has always stuck with me since the day I heard it. One of my favourite artists, Hiatus Kaiyote’s Nai Palm, once told me: “make the music you want to hear in the world, not what you think people want to hear”.

Whenever I feel lost in my music journey, what she told me has been my guiding light. I hope it means something to you!