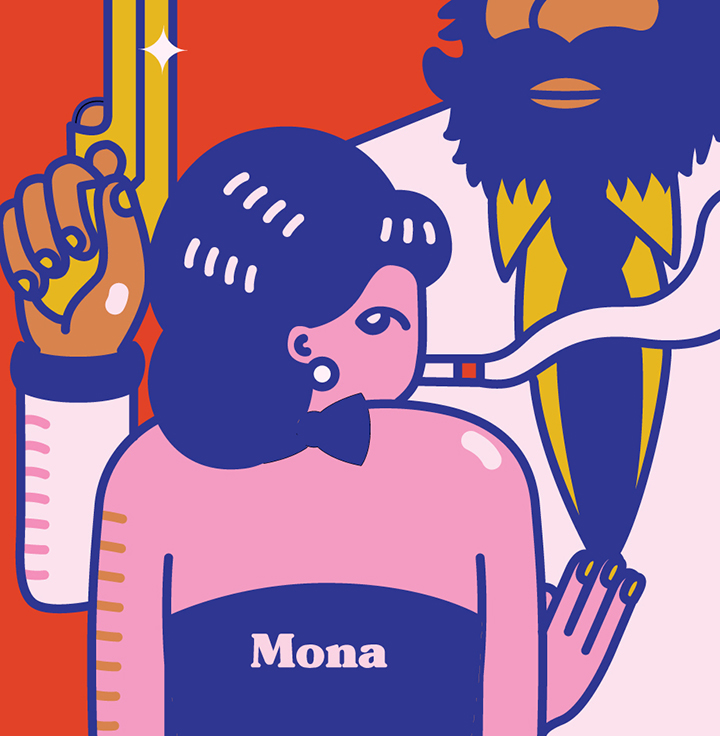 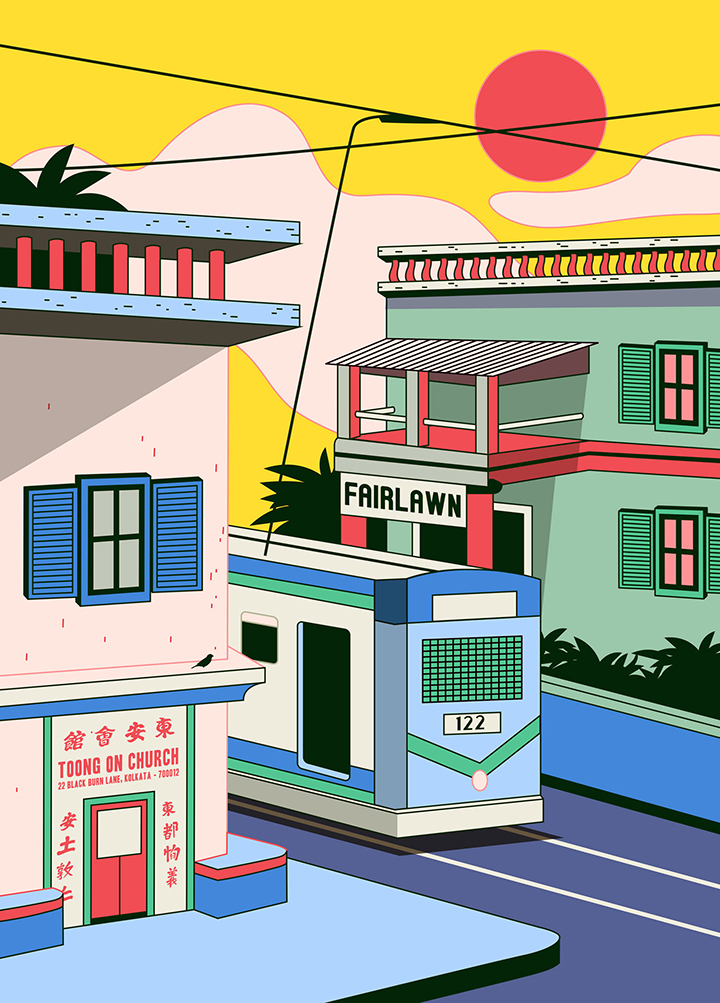 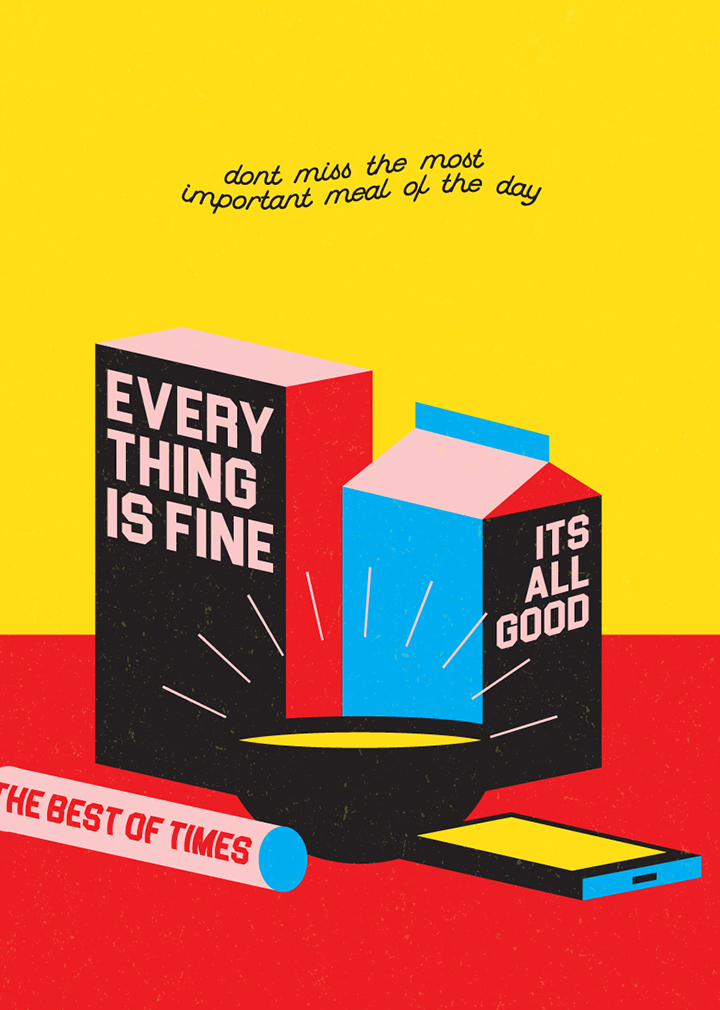 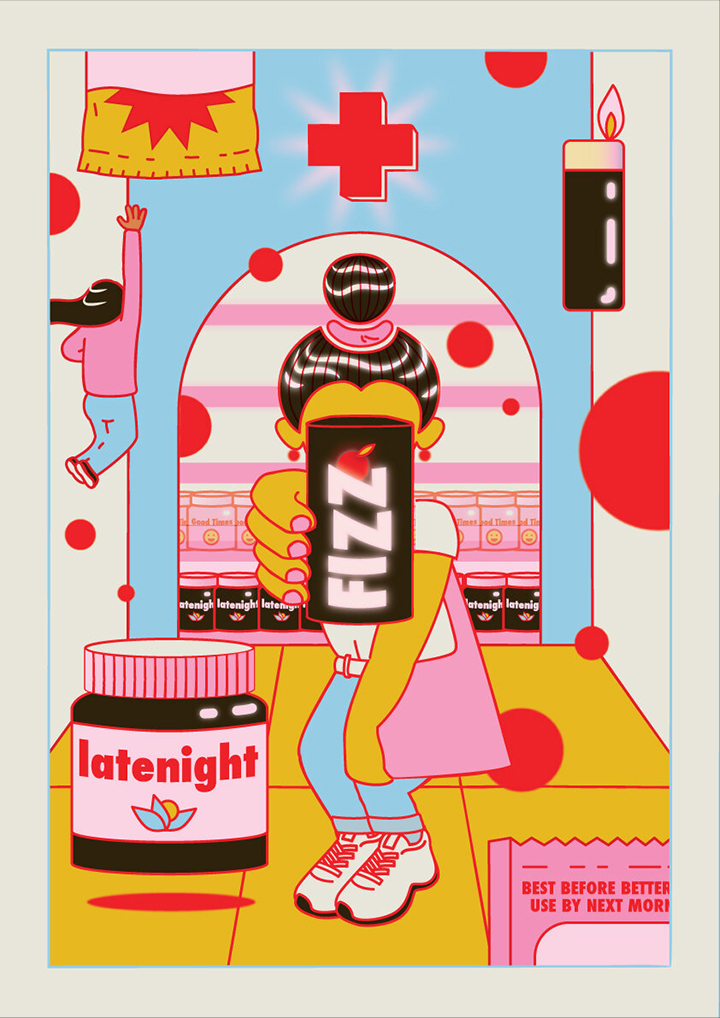 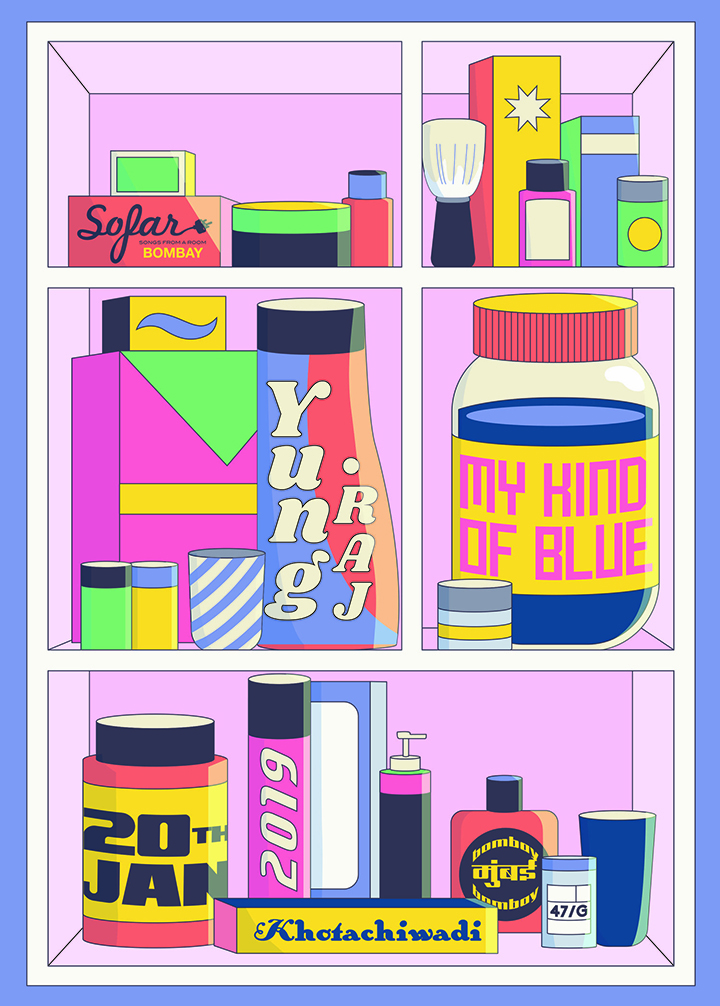 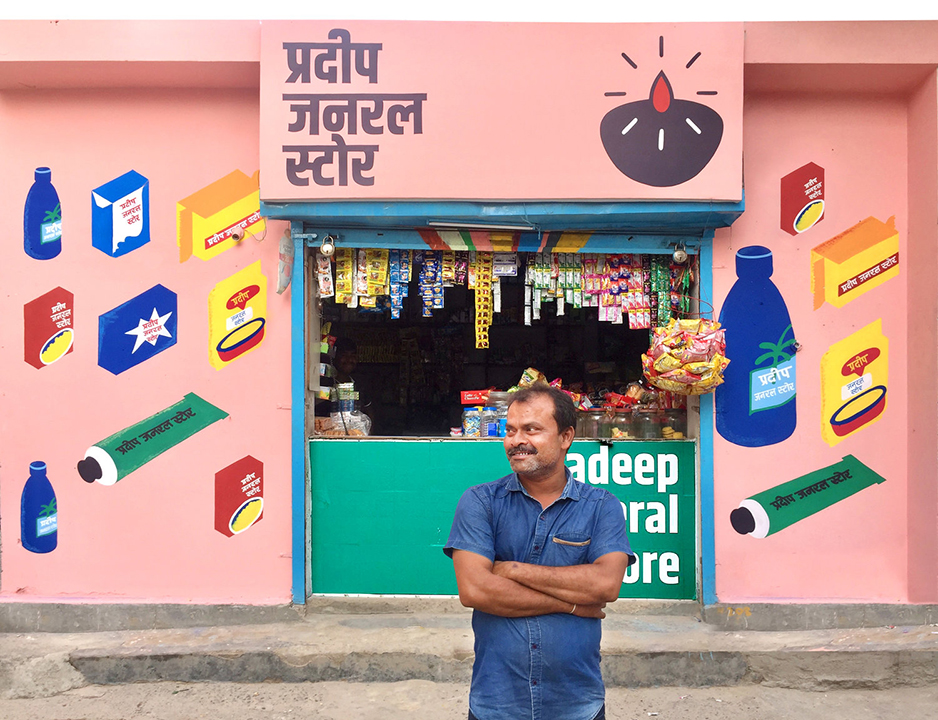 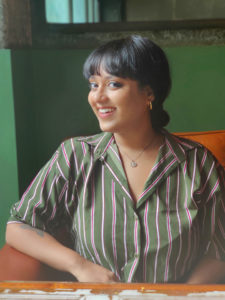 I’m a primarily self-taught artist and designer that kind of fell into it after dropping out from a degree in Literature. I grew up wanting to be a vet and then a writer – eventually coming to the realisation that I hated death and blood too much to do either. While in the beginning I did everything from branding music festivals to websites – my work has increasingly turned towards illustration over the past couple of years. My day job was at Kulture Shop – a Bombay studio that commissions and licenses artwork from Indian graphic designers. I curated and managed their artists while I freelanced on the side. For the past year or so I’ve been freelancing full-time and really enjoying the flexibility that comes with it. I’ve also built and currently run the Indian Gig Poster Archive that documents the independent art that is created for independent music in the country. I am part of a group of multidisciplinary artists Friends of Friends and we just put together our first set of zines! Outside of work I read – mainly comics, funny things, and science fiction. Sometimes I go for a swim.

I spent my childhood in Calcutta which was quiet, full of reading and imaginary best friends. We moved to Bombay when I was thirteen and its… crowded. There’s a tonne of noise and information to take in and it isn’t the most nurturing environment for creating and taking in things. The giant Indian film industry is based in Bombay, so a lot of commerce and creativity are also centered around it. But if you stick around enough there are pockets of independent art in the wild that you can find here. Bombay draws people to it despite its terrible quality of life and you just have to find your own people to survive.

I briefly went to Prague for two years to study and it was a complete change in pace. Prague is about as far as you can get from Bombay not just geographically but also culturally. Walking down a street is distracting if you’re interested in history – Prague is a little city out of time and I’m very fond of the little time I had in the Czech Republic.

I’m now back in Bombay surrounded by the most interesting and exhausted people I’ve ever met. I’m hoping to move to Bangalore soon which would ideally be a whole different experience.

Undeniably the best thing about living in Bombay is the feeling of being at the center of the world.

Undeniably the best thing about living in Bombay is the feeling of being at the center of the world. This is a feeling I think most big cities give you as they are designed to. However, like most big cities Bombay fails to be home to the majority of its inhabitants. The worst thing has got to be a failing infrastructure and a corrupt government – people in Bombay are regularly subjected to some of the worst living conditions on the planet and expected to make the best of it.

A lot of luck and encouragement. While I always loved drawing growing up I’m not sure I knew what graphic design was until I was 19. I walked into a writing internship on a day when the designer was out, the social media manager asked me if I was free and would I like to make a few sketches for an upcoming campaign? That day I sat and made character sheets of the kind of stereotypes you would find at music festivals. The sketches were hits, and between my friends and colleagues, I was pushed into checking out what I could do with real software. Soon I started working on a comic skewering hipsters, a fan zine, and a music festival, and before I knew it I was making my first incorrectly formatted invoices! I dropped out of my degree in Literature at the same time so I put a lot of pressure on myself to learn real skills even if it were off of Youtube. Honestly, my schtick has not changed since then – I’m still funny, sarcastic, impatient and dismissive of culture vulture scene kids, and stubborn at conquering a skill I don’t have.

Honestly, my schtick has not changed since then – I’m still funny, sarcastic, impatient and dismissive of culture vulture scene kids, and stubborn at conquering a skill I don’t have.

Very. This was partly because my first pick was a vague ‘writer’ which was an even rockier career path than design. My friends and colleagues took me seriously before I did, which is how I got a lot of my earlier gigs. My parents filled my childhood with books about little British children that solved improbable and age-inappropriate mysteries, so I think I still carry some of their blind confidence in adult me.

I got started doing comics for an online magazine, so I’d like to get back to comics again very soon. It lets me satisfy my itch to write while also marrying it to my drawing and design skills – plus its an amazing tool for storytelling. I’d love to find a permanent/temporary physical home for my gig poster archive. Also, I’m setting up my own merchandise and prints store in the next few months. In the long-term, I’d like to create my own comics both fiction and non-fiction, and also explore newer areas like 3D printing! I want to keep finding ways to combine the disparate things I love with my skills. Eventually, the plan is to retire to an animal rescue farm/art studio where I only see other humans at a scheduled time once a week.

I want to keep finding ways to combine the disparate things I love with my skills.

Lisa Hanawalt, production designer of Bojack Horseman and creator of Tuca and Bertie!

She seems to be just as amused by animals as me and its been a long-time secret dream. Moment Factory a madly inventive studio that does shit like projection mapping on ancient cathedrals. Off the top of my head: Colors magazine, Happy Socks, Nobrow Press, LUSH – and a long list of my favourite publications and musicians (Noname, Lifafa, Sleater-Kinney, Fugazi if they would reunite just for me). I am not sure that I care about brands as much as I want new skills and passionate and funny people to work with. More shots in the dark I’d love to take: music videos, pet furniture, sneaker reupholstery, museum public education programs. All you have to do is appeal to my interest. And I am very easily interested.

Far more talented and tougher than they’re given credit for. Most of the women I know work day and night to carve out independence in a country and industries that are still insanely oppressive. Each one is funnier than the funniest stand up comics I’ve seen. Most are fighting some kind of epic secret battle with their brains, bodies, or families. Some are absolute demons, some are basically saints. A lot of them are strange and sweet in ways that I can’t write about well enough. I’m super proud of the women I know even when they’re not feeling it of themselves.

Most of the women I know work day and night to carve out independence in a country and industries that are still insanely oppressive.

Largely no because designers and artists, especially female, are not famous and visible. Especially not to the average kid. At the time all my heroes came from distant Western fiction – Wednesday Adams, Anne of Green Gables, Veronica Mars. Much older in school and college I found inspirations closer home – the likes of Amruta Patil, Marjane Satrapi, Yuko Shimizu, Molly Crabapple.

I won’t lie, it can be pretty disheartening. Last year #MeToo unearthed a small percentage of the sexual harassment and abuse that is rampant in a largely unregulated industry. Most agencies and studios function without systems in place for women to feel safe reporting this kind of stuff. This year we’ve seen a lot of the accused creeping back into public lives – a lot of them are CEOs, creative directors, biennale curators, and other assorted phallic power symbols. The friends I do have in the industry seem resigned and defeated. But there’s too many of us to ignore, so I can only hope it gets better.

By numbers, I’m surrounded by more female artists than I can count, but a disproportionately low number of them make it big. Asking for your money, rights, as well as a seat at the table comes with its standard sexist notions – I was called a ball buster once for not agreeing to a ridiculous pay cut.

I personally find myself boxed way too quickly into a Female Designer carton that no actual woman ever fits. We’re less cute and well-dressed than you think probably (but we do all have bangs).

Dive deeper into the things you love. Find people who resonate with your own talents and interests