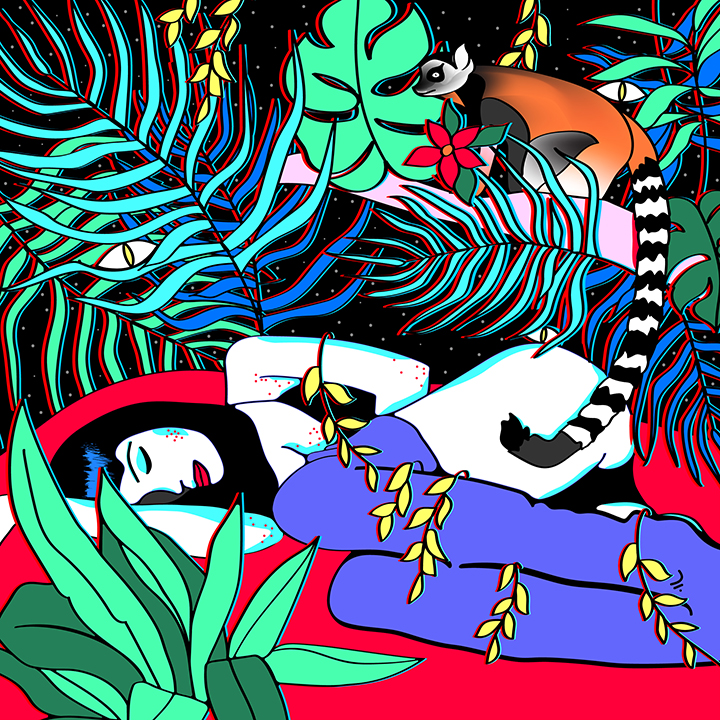 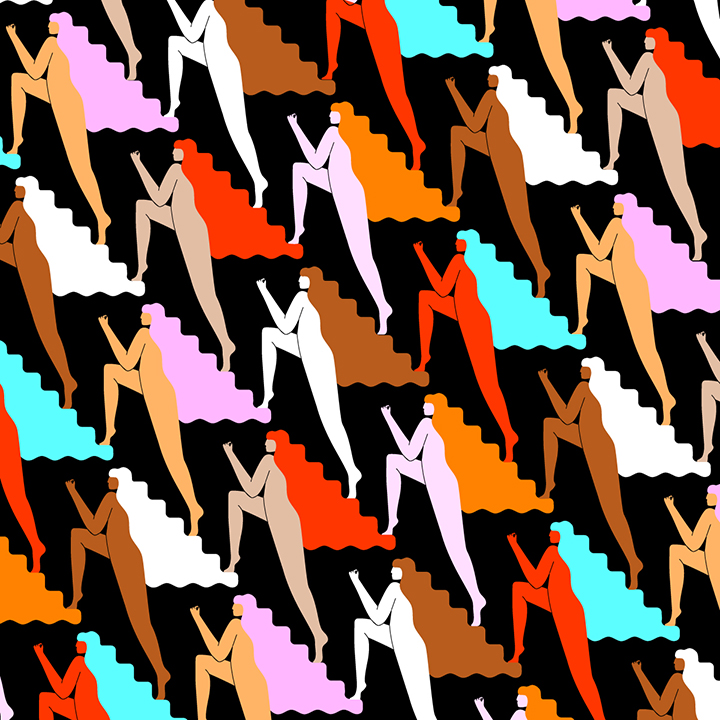 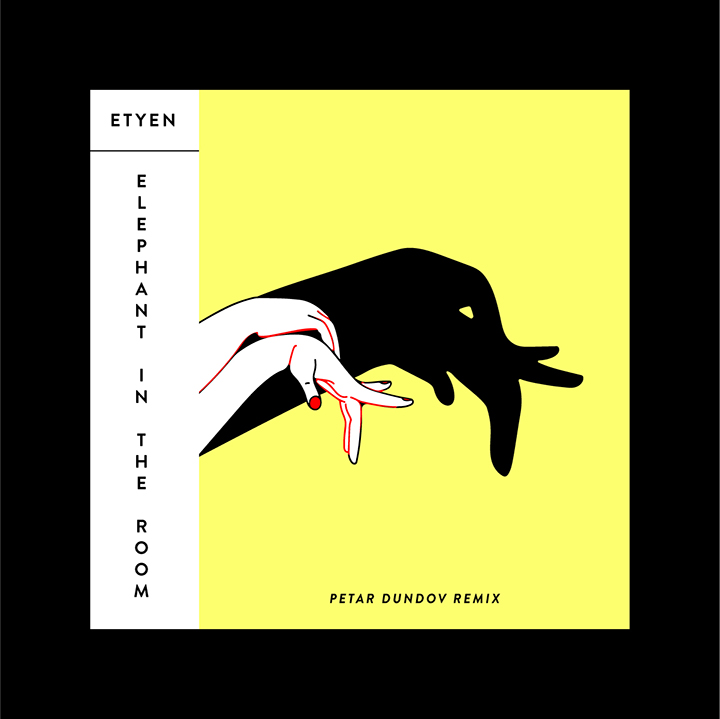 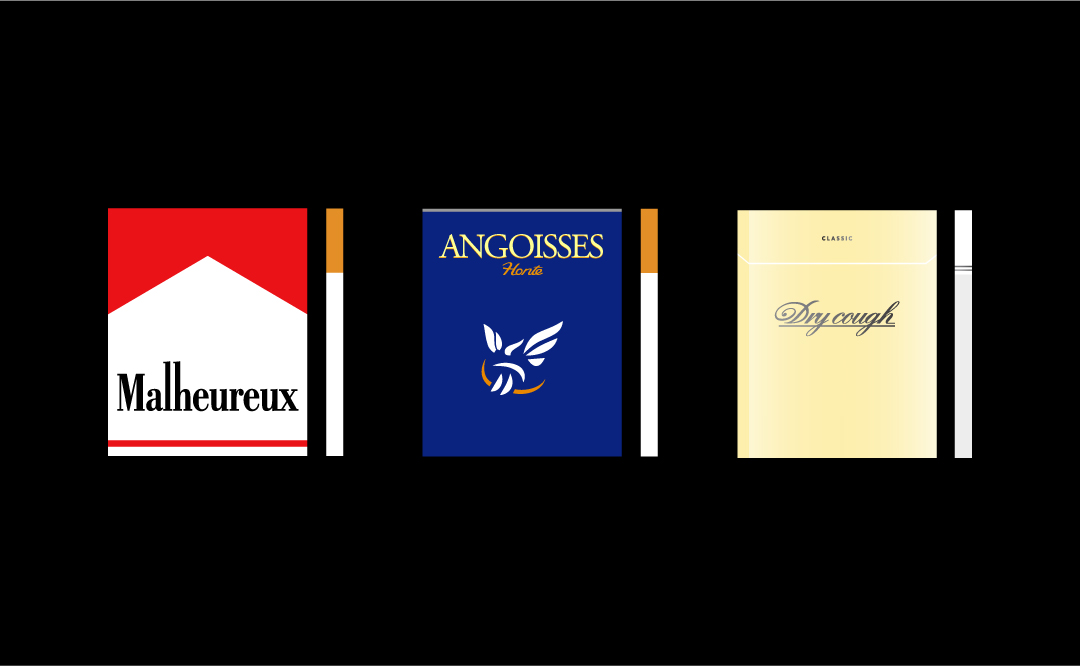 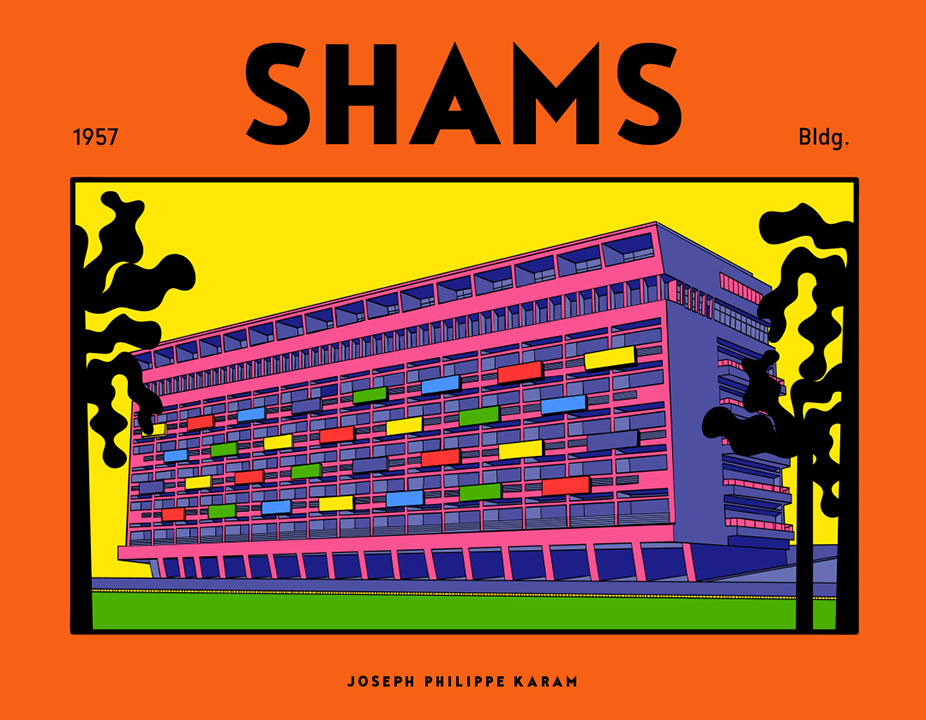 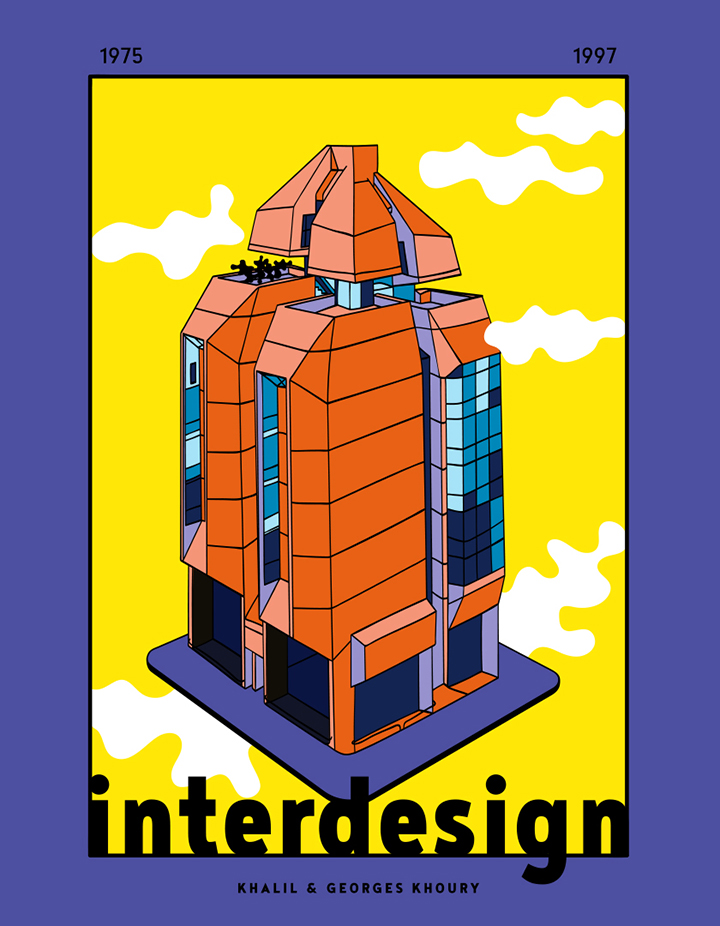 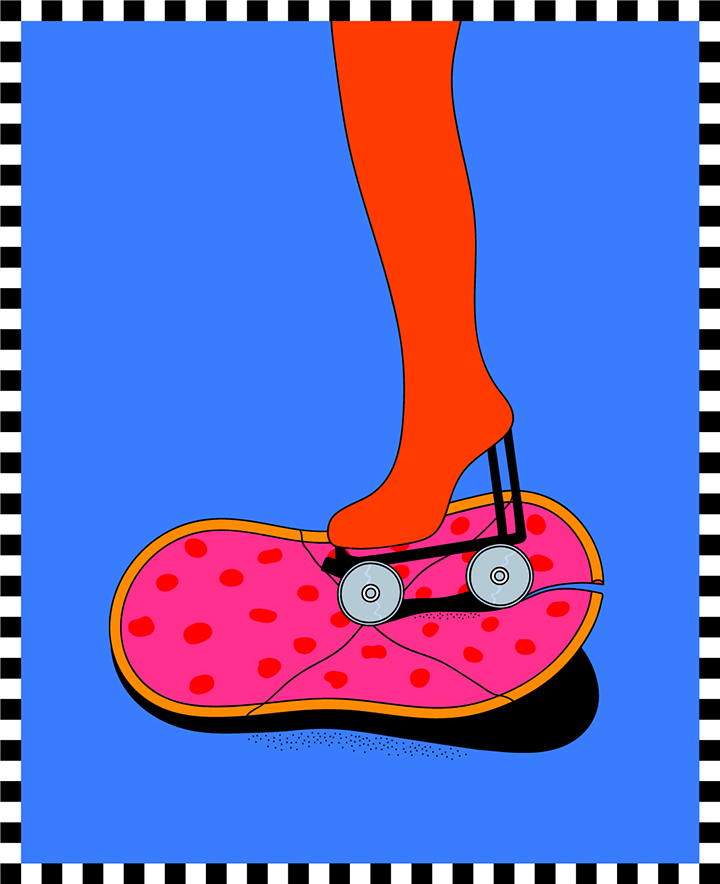 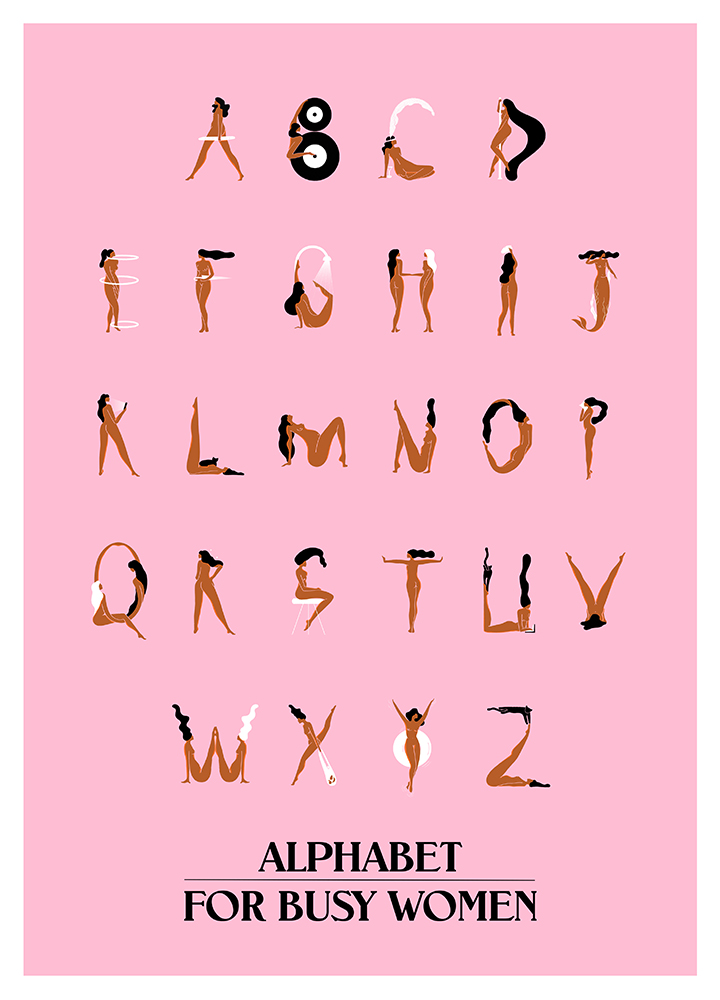 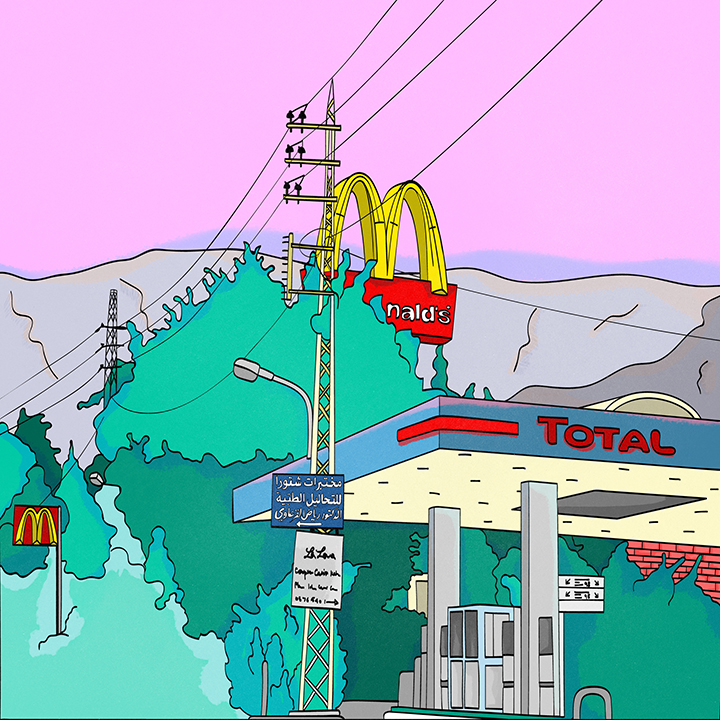 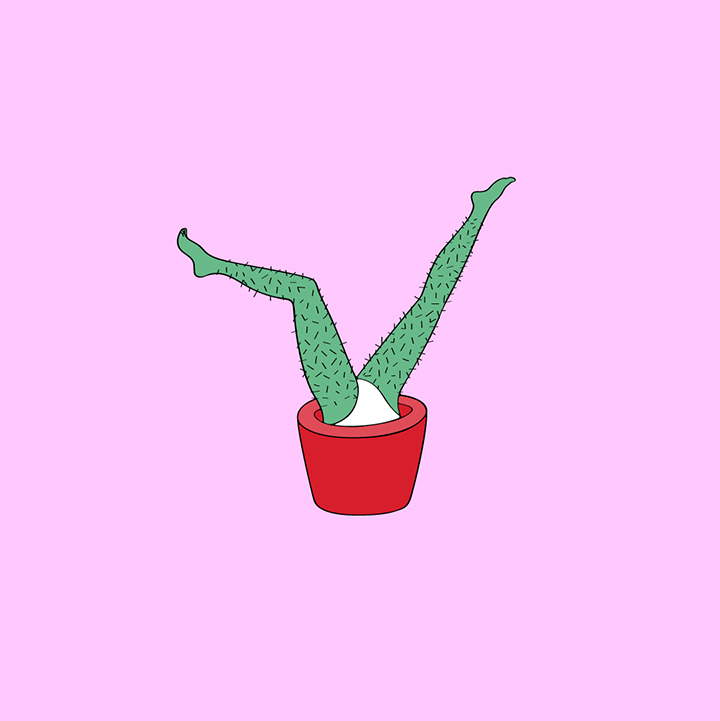 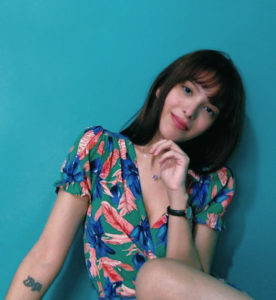 You can call me Pam. I’m 27, a graphic designer and illustrator living and working in Beirut.

I find that sarcasm and humor are the best ways to deal with dramatic things. My work is inspired by the strange, the mundane, and all things feminine. When I’m drawing, I like to mix and match elements to create something completely new. Consequently, I find myself smiling at the things that I draw, and ultimately would like the spectator to have the same reaction.

I like sniffing books and arranging them by paper smell.

I don’t like cars, small talk, phone calls, hair stuck in a hairbrush, birds stuck in a cage, and meat (had to mention it).

Under my bangs, there’s a forehead that’s larger than life.

Beirut is overwhelming, in every shape or way you could possibly imagine. From a designer’s point of view, it’s a pool of talent and creativity, but it could also be frustrating, amidst all the challenges and chaos.

However, since October 17, Lebanese have been taking to the streets, demanding the downfall of the post-civil war political regime. Things are hard at the moment, but then again they have always been around here. What’s really amazing though, is seeing hundreds of thousands of people coming together in solidarity to fight off age-old corruption. Right now, the only way forward is up, and I can’t be but hopeful.

Right now, the only way forward is up, and I can’t be but hopeful.

The best thing is the creative energy fostered in Beirut. The worst would be the urban hostility, lack of public spaces and noise!

I can’t remember when it was when I first started drawing because it was from a very early age. It was almost inevitable that I’d set my career path in Design. As a kid, I was extremely shy and didn’t feel comfortable enough in my female skin. Self-expression through Art helped me deal with my insecurities. I used drawing for fun and as a means of escape, so imagine my excitement when I found out that I could make a living out of it! I studied graphic design and worked in branding and fashion for a while after graduating. It was a nice experience, but there was always something missing. I’m currently freelancing, slowly discovering what works best for my career between graphic design gigs and commissioned/personal illustration projects, which is the perfect balance I need between these two fields that I love.

Self-expression through Art helped me deal with my insecurities.

Both my parents are good with a pencil, I owe part of my passion and talent to them. Although neither one of them took on drawing professionally, I think deep down they knew it was my strongest asset and that I would eventually put it into use. I remember, whenever we would have guests over, they would show my drawings to family and friends. Not sure if it was because they were actually good, or because they ran out of conversation topics. Either way, it worked, and now that I think about it, it was tremendously encouraging, and it helped me direct my energy towards art and become self-aware of my skill.

I struggle with the idea of sticking with one style or medium. I always feel the need to learn new techniques and improve.

I’d love to see my illustrations come to life through animation, which is something I hope I can make more time for in the future.

I’ve also started experimenting last summer with clay and ceramic, turning my drawings into 3D objects, through a side project called “Usine Sans Usage”, which translates into “Useless Factory” and was displayed at Beirut Design Week last June. This project is one of my top priorities for the upcoming year.

I struggle with the idea of sticking with one style or medium. I always feel the need to learn new techniques and improve.

No one in particular, or else the list would be too long. What’s great about this field is that it’s full of surprises. However, I’d love to collaborate with product and fashion designers, as I feel they go hand in hand with what I do. I also enjoy collaborating with artist-friends.

Fighters, survivors, warriors. They’ve put up with a lot of shit, yet they never give up or back down. Unfortunately, feminist consciousness isn’t always registered within my community, but I choose to surround myself with positive, inspiring and empowering women. That being said, I strongly believe it’s also the responsibility of every female to educate, lift and be an example to women who are still not aware of their rights and powers.

Most of the influencers in the 90s were celebrity singers and actresses. I guess around that time, a lot of my style was influenced by Gwen Stefani. It wasn’t until I was around 14, that I found myself a Lebanese muse, actress and film director Nadine Labaki. She has this very powerful female aura that cannot be ignored. After I watched her debut film, Caramel back in 2007, I found everything about her to be completely inspiring and mesmerizing, down to the sound of her gold earrings and bracelets jingling with one another.

There’s also my big (and only) sister. She’s an architect and sustainable development activist, so talented and driven with life, she inspires me every day. But even when we were younger, she would strike me with her sense of responsibility, ambition, and fearlessness.

I’ve received inappropriate comments from men, about my work. Some men -of course not all of them- think that if you’re a female (artist) addressing topics and issues related to sexuality and the female body, then it’s an open invitation to flirt.

There’s also the typical risk of not being taken seriously, and lower fees expectations just because you’re a woman.

But on the bright side, I got the chance to meet and work alongside super badass females, who despite those obstacles, have managed to establish themselves and make it in a man dominated world. There’s something amazing about female success, in the sense that it’s contagious.

Art is one of the most peaceful forms of rebellion, so whenever you can, use it as a tool to make a change and a positive impact.

I’d give them the same advice I give myself, which is: don’t be afraid of experimenting! Finding a consistent style is great, but as a graphic designer, it could also be limiting. I often find myself drifting between the rich details of illustrating and the clean and modern lines of graphic design. It used to bother me in the beginning, because I thought that I had to stay consistent to look more professional. But I came to terms with the fact that change is inevitable, it’s part of who I am, and a healthy sign of growth and experience. Different ideas need different visuals. I’m someone super flexible and I think that also translates into my work. Now I would say, that my signature style is set by how my brain processes an idea, and not necessarily by the visual language I use.

Also, be prepared for some competition. These days, you’re likely to discover a great illustrator every day, and that will probably make you feel artistically inferior. It doesn’t mean that it’s true, and anyway, the good thing about Art, is that it’s incomparable -as long as you’re authentic of course. Channel your feelings of doubt into self-improvement, but also learn to enjoy, support and appreciate all talents.

Finally, Art is one of the most peaceful forms of rebellion, so whenever you can, use it as a tool to make a change and a positive impact 🙂