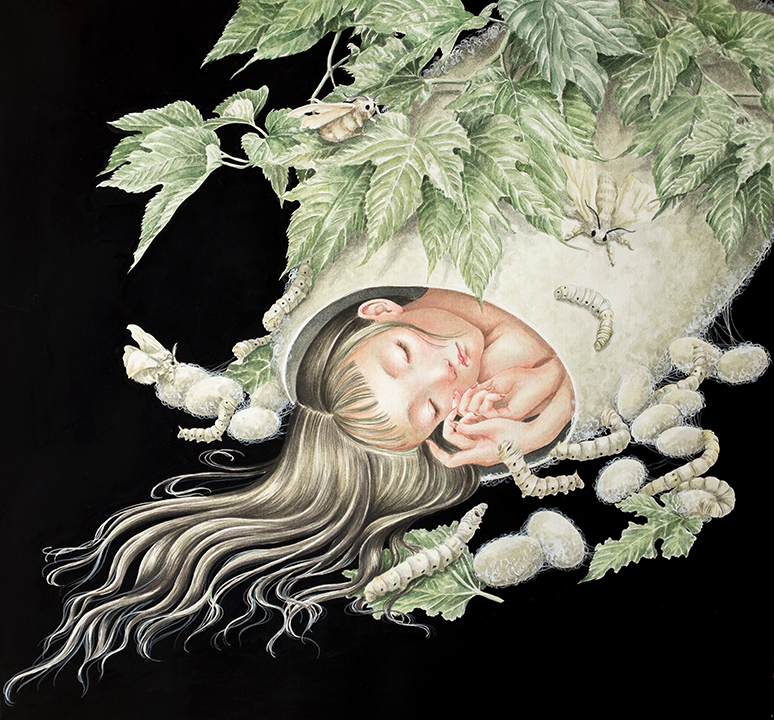 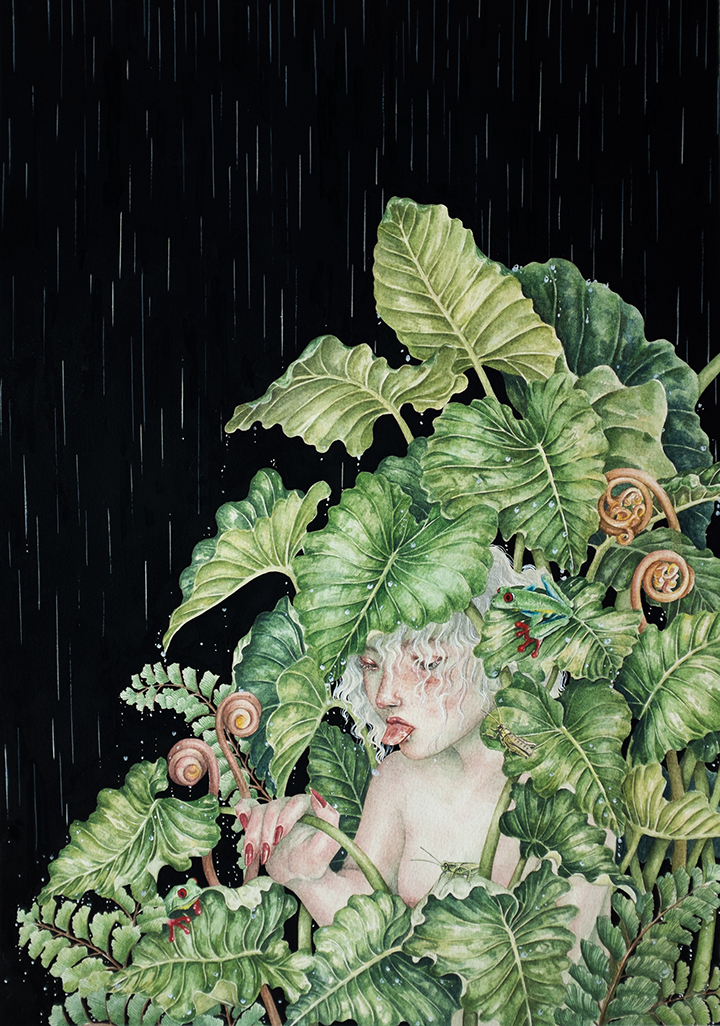 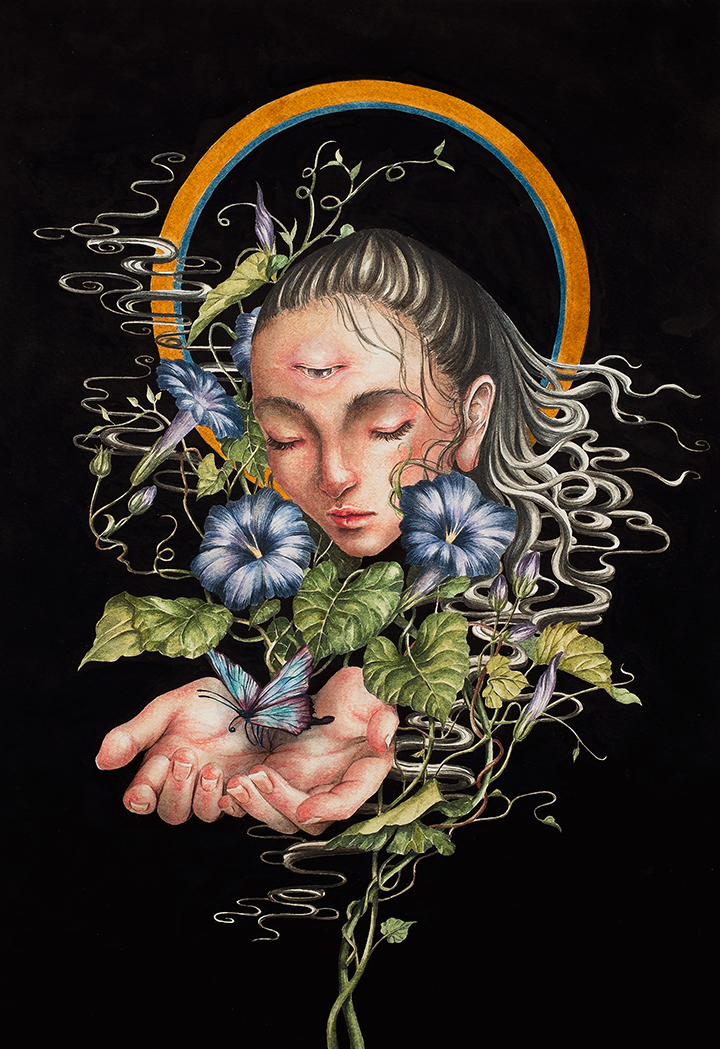 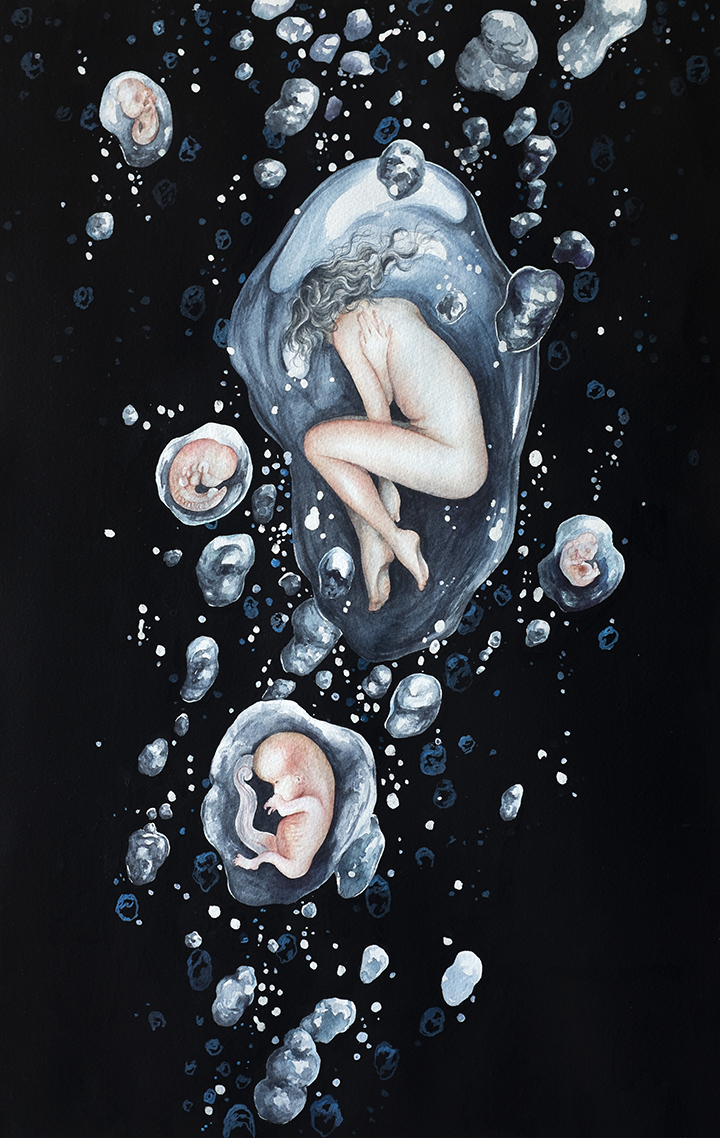 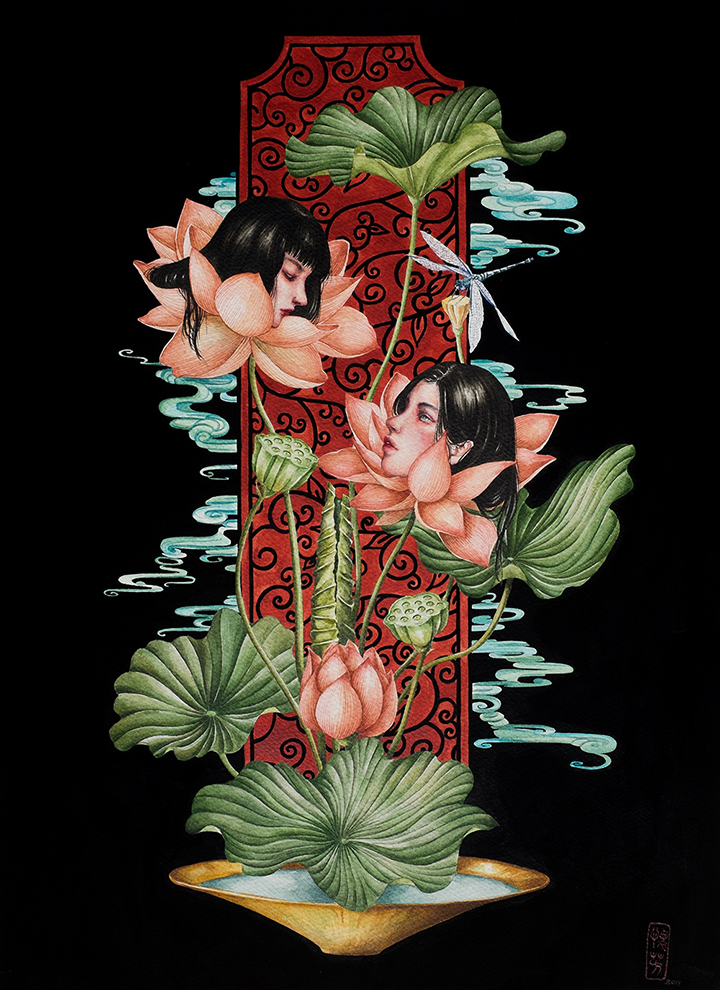 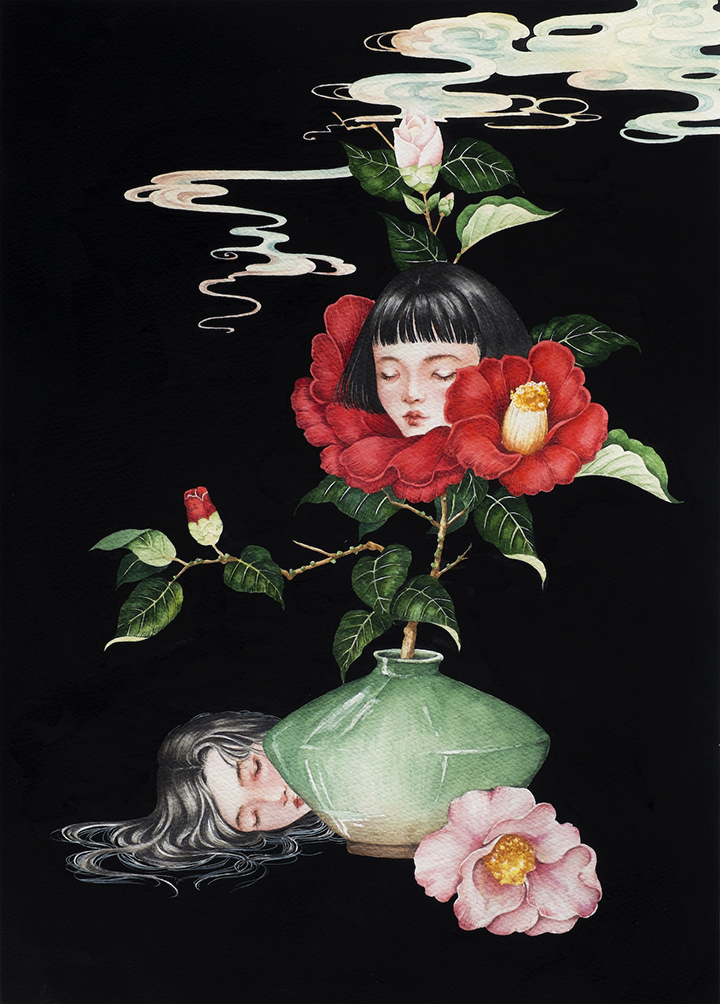 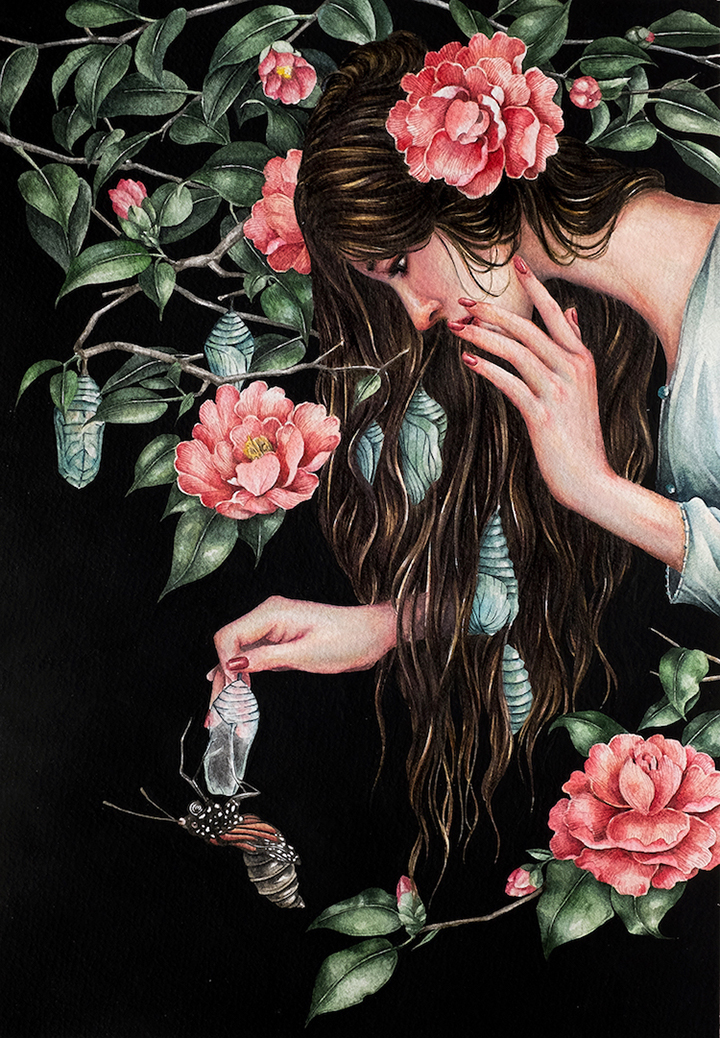 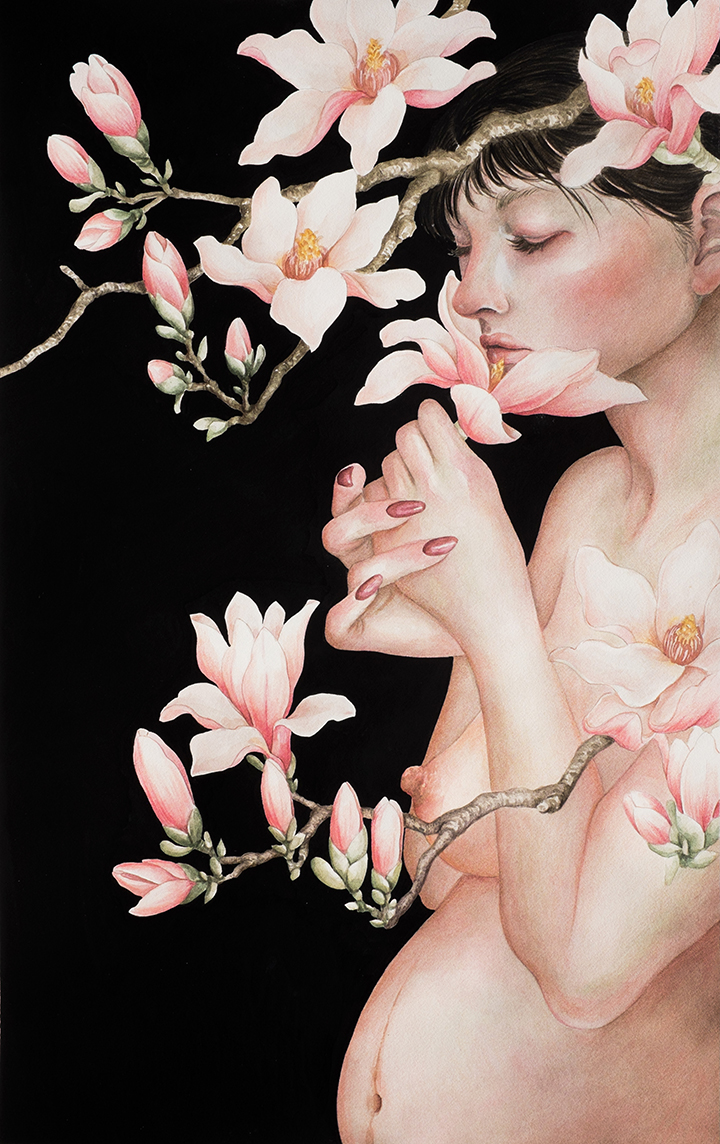 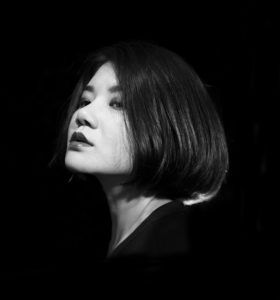 I’m an accidental Vietnamese painter who was born and raised under the tropical sun of Saigon and after wandering around for a few years, I now reside in Bologna, Italy with my little family. I recently became a mom and since then I’ve been spending more time with my son than painting away by the easel, but I still manage to paint during rare leisure time. I picked up painting 4 years ago while studying abroad in the United States, unknowingly that a hobby back then would gradually grow into a passion or may I say, a lifetime pursuit. My main practice is watercolor on paper and the dominant subject is women submerged in the dark world, tangled with other earthly creatures.

Saigon is a beautiful mess that once you catch its rhythm it will linger on your mind for a long time. It has this unique culture of small alleys which run across the city like blood veins, and if you dare to wander around you may find one of those hipster hubs: handmade leather stores, idyllic coffee shops, lavish cocktail bars, vegan restaurants, and many other local establishments. Silence is an unknown concept in Saigon, there is always something going on: neighbors bashing your ear with karaoke, street vendors with speakers mounted on their bicycles advertising mouse traps or massages, people talking, shouting, scooter honking. It is dynamic, chaotic and fast-pace. The city has changed significantly from my childhood memory and it is still changing every day. Old buildings torn down, skyscrapers rise up, new districts emerge, expanding to all directions. The key to living there is to enjoy every single moment while it lasts.

Bologna is its perfect antipode. There are so many memories here. I love the way the old towns in Italy preserved: they keep the millenniums years old original structures within the wall and build the new buildings surround it. The bar where I usually have an aperitif may as well date back to 600 years ago, which is rather young compared to other monuments in Roma. The lifestyle is slow, food is good, wine is cheap and greenery is abundant. Bologna is rich in cultures, which can be summed up in a famous saying “La dotta, la grassa, la rossa” which means the learned, the fat, the “red”. Different from Saigon which is a busy and chaotic metropolis, Bologna is small, cozy and tranquil. I’m just starting to call this town home, and I know for sure that in people’s eyes I’m still a tourist. It’s like being a foreigner in Vietnam, no matter how fluent your Vietnamese is, how willing you are to try strange fruits, foods that smell weird, even if you marry a Vietnamese and wear Ao dai, the locals would still look at you as an alien. I feel exactly like that here even though Bologna is a lot more international than many cities. Hopefully in the future when my Italian improves and the culture thoroughly absorbed, I would feel connected. It takes time to grow roots.

I picked up painting 4 years ago while studying abroad in United States, unknowingly that a hobby back then would gradually grown into a passion or may I say, a lifetime pursuit.

The worst about Saigon is pollution while for Bologna is greenery. Saigon is a concrete jungle. Here I have a forest in the backyard.

I have yet to find the best of Saigon and the worst of Bologna.

The artistic inclination was embedded in my DNA, I suppose. I still remember vividly my very first drawing of a stick figure fish when I was in kindergarten. My teacher praised me and I thought, “Oh, this is something that I’m good at.” And since then I was always making doodles and comic strips on the back of notebooks during lessons, even during the examination after finished all the mandatory tasks. Then there was a long pause, I was busy finding a new direction, making new friends, falling in love, finding my own identity. I simply diverted.

I went to college in a small town in the countryside of Oklahoma where the majority were students and not even a Starbucks was presented. I did not have many friends and most of my leisure time was spent either within my flat or 30 minutes trip to the nearest grocery store. One winter night, I was incredibly bored and decided to kill time with an old watercolor set which was a parting gift from my then-boyfriend, now-husband. Some colors were ruined, covered in molds and smelled like freshly cut grass. It was my first encounter with watercolor and somehow those confused scribbles, those messy brushstrokes resurrected the lost childhood passion. I continued to paint until graduation. Every day, after classes, I’d run home, opened a bottle of wine and painted away until late in the night. My first exhibition was with Ally who operated Swoon gallery in LA. She passed away a few years ago when our last exhibition was still on air. To this day, I’m still grateful that she gave me an opportunity to reassure my passion and my ability.

One winter night, I was incredibly bored and decided to kill time with an old watercolor set which was a parting gift from my then-boyfriend, now-husband. Some colors were ruined, covered in molds and smelled like freshly cut grass. It was my first encounter with watercolor and somehow those confused scribbles, those messy brushstrokes resurrected the lost childhood passion.

Not really. I was born when the country just opened its gate to the world after a lengthy, devastating war. My family suffered poverty heavily during bao cap era (system of budget subsidized) and to this day they still remember it vividly. When the top priority was to bring enough food to the table, there was no room for chasing dreams. The only way to escape poverty was to have a respectable job with a stable income and being an artist was anything but. I was like a black sheep, no one in my family worked in the creative fields so they were doubtful. They pushed me to study finance and I was struggling with numbers for a few years before realizing that I was not cut for it. My parents have always had high hopes for me and they worked around the clock to support my education abroad. They never wished for their daughter to be an artist but as time passes, they slowly softened and began to appreciate my creations. My Italian family also has no roots in arts, but fortunately, they seem to enjoy what I’m doing and my husband fully supports my passion.

My big dream since moving to Italy is to go to a proper fine art school. Being self-taught, I truly enjoy the natural flow of creativity and the comfortable space where I can create what I like, but I often feel like something is missing out. I think what I need the most now is a mentor, a teacher who can guide me with their knowledge and insights as I venture deeper into ARTS. At the moment I’m enamoured of classical arts from Renaissance and Baroque era especially those who employed darkness like Caravaggio, Guido Reni, Giorgio Vasari just to name a few. I would love to get into oil painting in the future and be able to practice traditional techniques: grind the pigments, mix my own colors and medium, stretch my own canvases, mount my own frames. My goal is to be a self-sufficient artist.

Right at this moment, being able to paint every day is considered a privilege and I only hope to continue this as long as I can.

Right at this moment, being able to paint every day is considered a privilege and I only hope to continue this as long as I can.

I never thought about it actually since I’m used to working at my pace and in… solitude. But I have thought about being an apprentice, you know, like in the past centuries. A famous master would have few disciplines under him, follow his guidance and study his techniques while running errands around the shop. If such practice were possible nowadays I would follow the living master Agostino Arrivabene. He’s undoubtedly my number one admiration whose visions and techniques are just…unearthly.

Each of them is a unique universe.

Each of them is a unique universe.

I did not have any really. I was exposed to the art scene quite late.

Within the industry, I’ve always been treated with kindness and respect, fortunately. However, I think being a female is still a challenge no matter where you live or what your job is. Being masculine is still a safer choice, sadly.

There were several times when I introduced myself as a painter and the response was blatantly prejudicial. All the women artists I know are professional. They work around the clock, respect deadlines while strive to maintain a functional household, a happy home. Being an artist is not much different than having desk jobs. It also requires consistency, commitment, and competence.

Keep knocking doors, keep sharpening your skills, and never cease to nurture your imagination and philosophy.

I once read a saying that no one receives more criticism and rejections than an artist, and it is true. You will often feel discouraged, beaten and lost but don’t let it shut you in. Keep knocking doors, keep sharpening your skills, and never cease to nurture your imagination and philosophy.