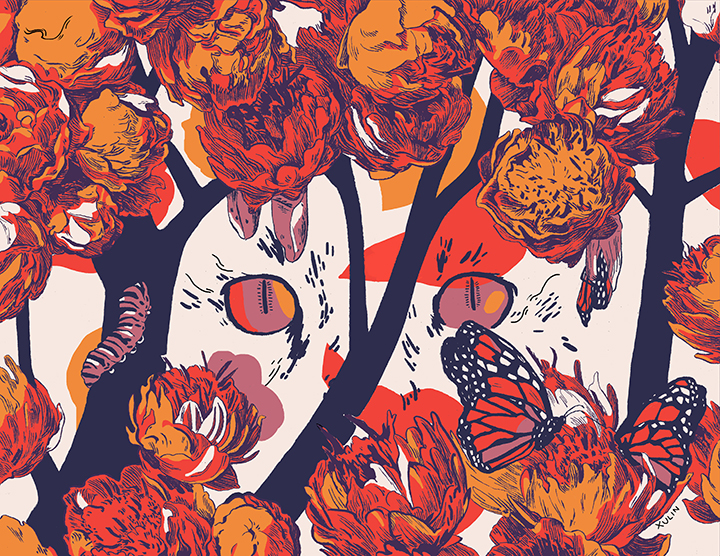 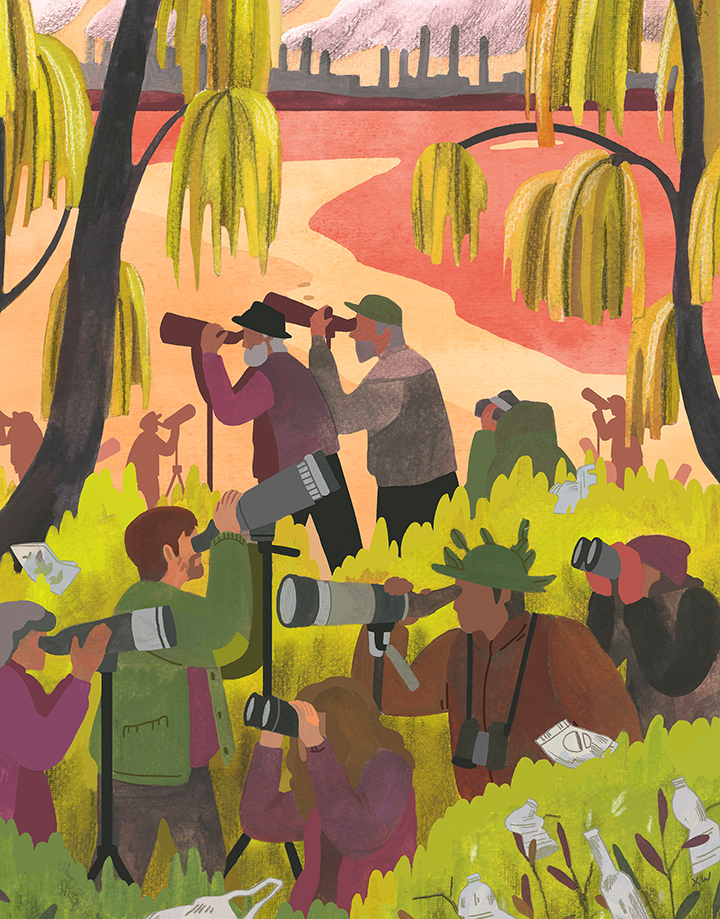 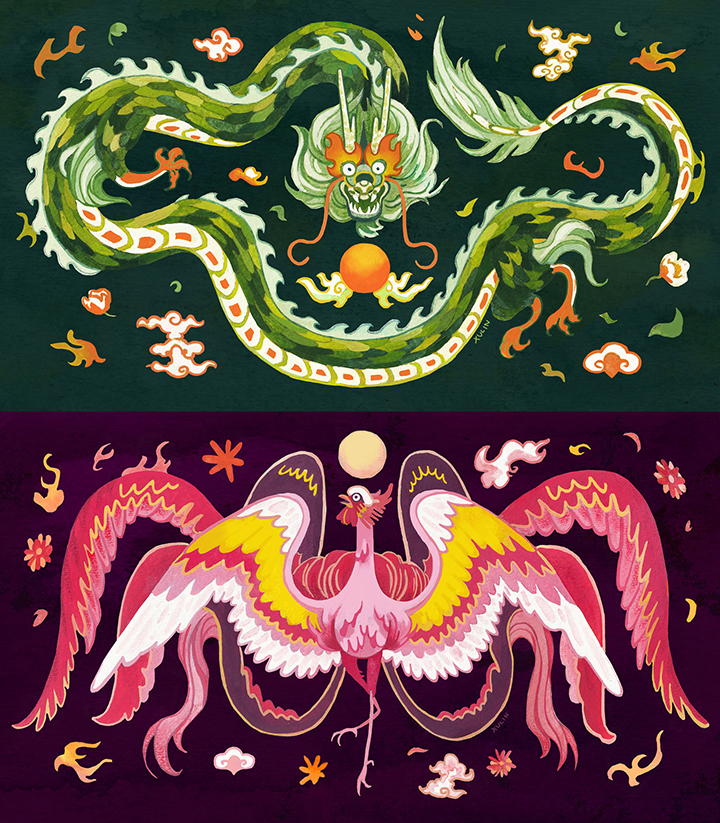 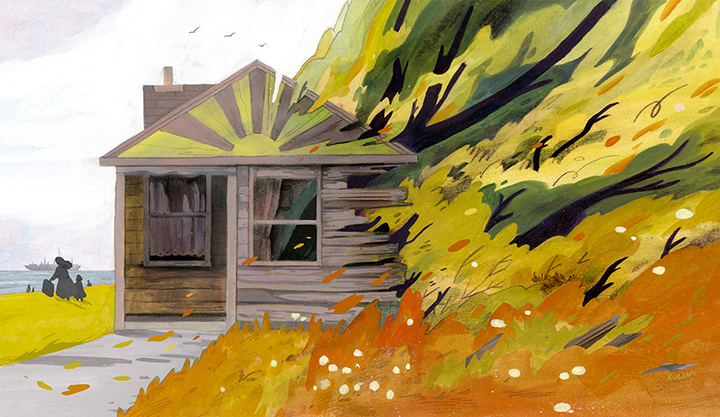 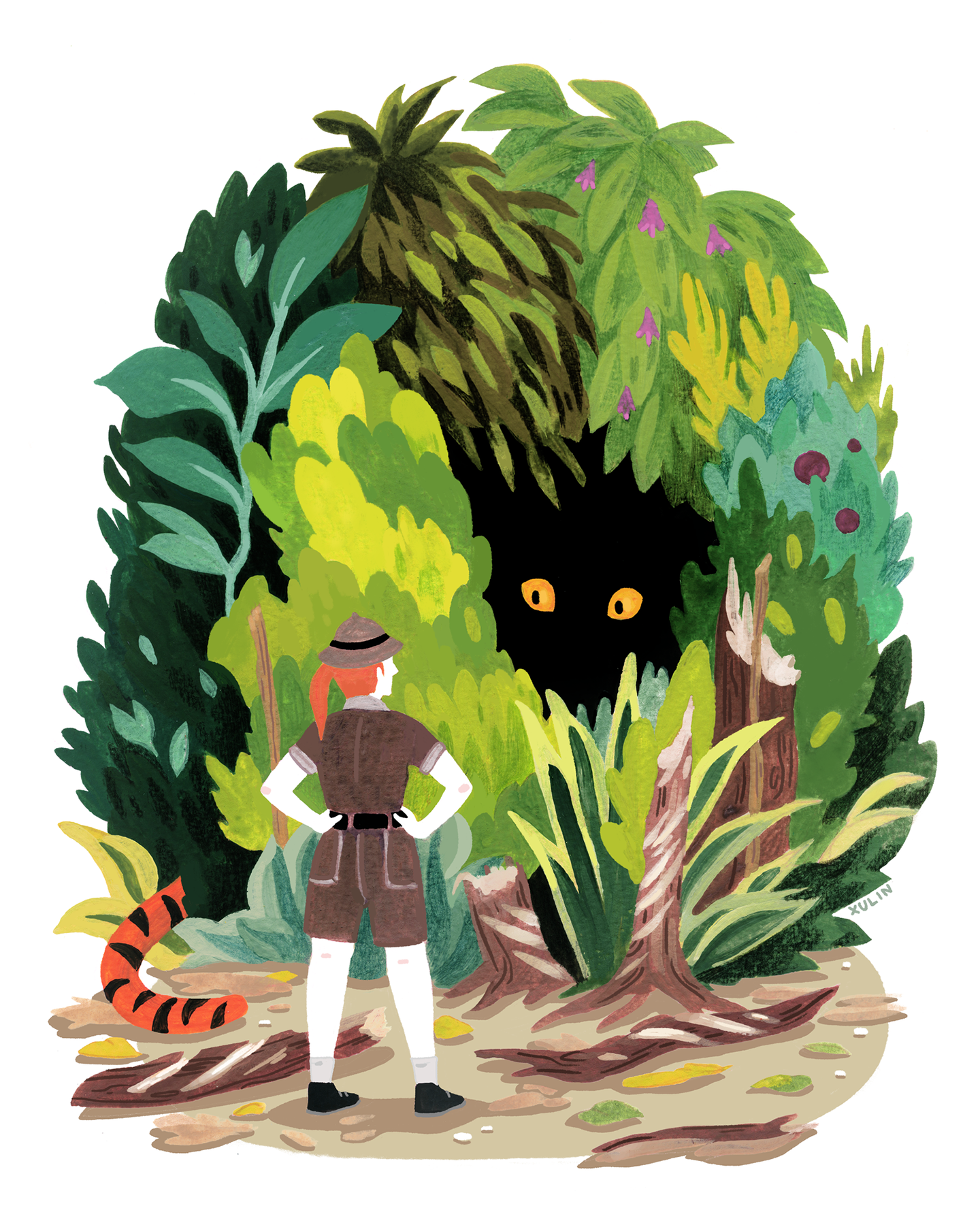 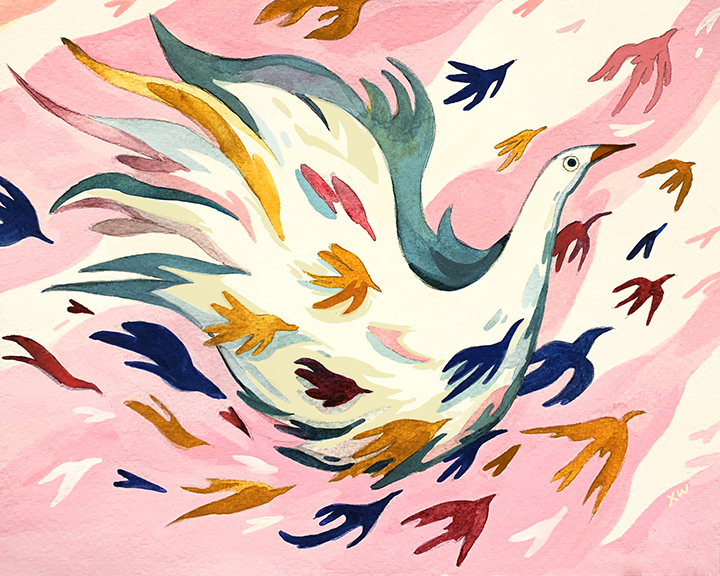 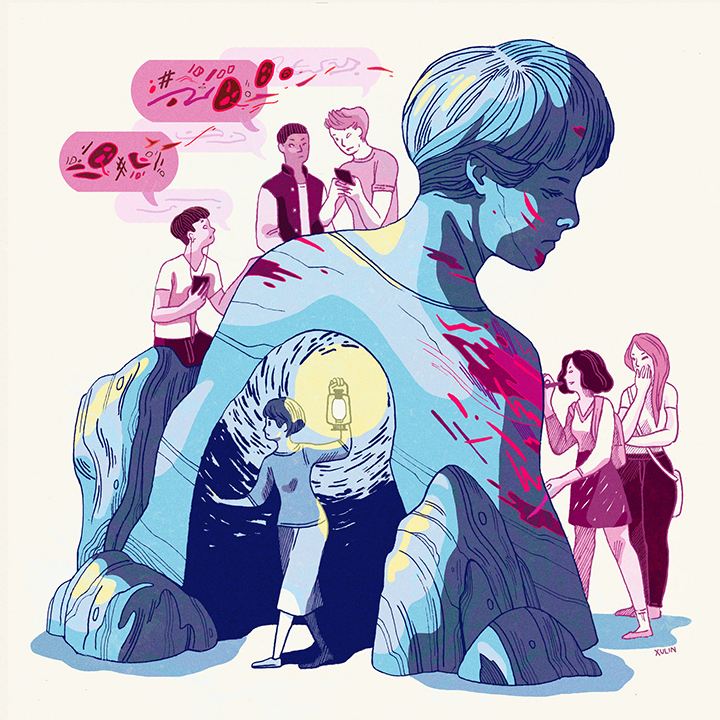 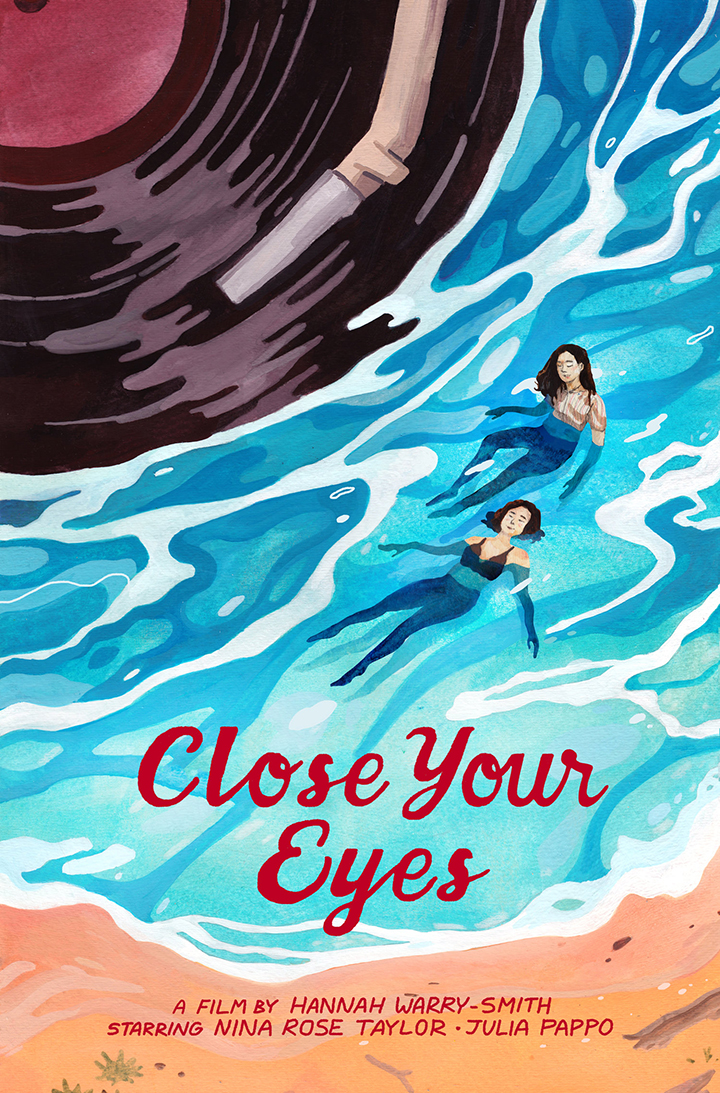 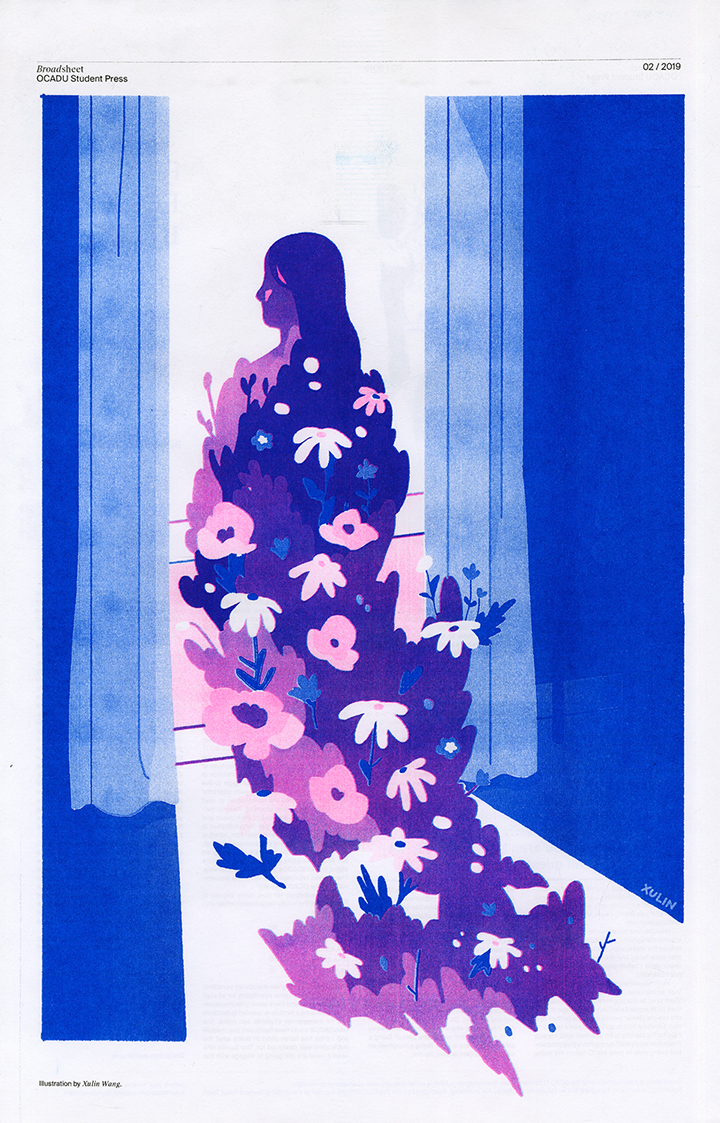 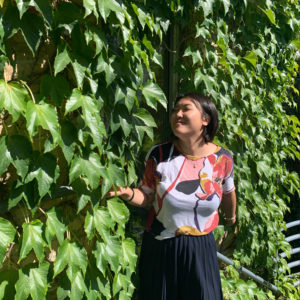 My name is Xulin Wang, and I’m a freelance illustrator based in Toronto. I graduated from OCAD University earlier this year (2019), and I’m currently focused on establishing my career in editorial and book illustration. I consider myself fairly lucky to have found some work so far, but I’m also kind of impatient and always have a bigger goal in mind. I also create comics, some of which are autobiographical, others for the purpose of spreading social/scientific awareness and empathy.
I’m originally born in China but moved to Canada with my family when I was six. I grew up in Calgary, which is a city surrounded by an abundance of rivers, forests, and mountains. Most of my childhood is defined by the experience of being outdoors, which is why I’m so preoccupied with themes of nature in my work. Being an immigrant and part of the Asian diaspora was also a formative aspect of my identity and my art – the feeling of being the hybrid result of two cultures, and of never perfectly belonging in either.

I moved to downtown Toronto from Calgary for university at the age of 18, partly because I was looking for the best illustration education in Canada, and partly to deliver a shock to my system after living in a sleepy suburban city for so long. Toronto is a huge city surrounded by urban sprawl, with a diverse immigrant population and many pockets of different cultural communities. The presence of industrialization is everywhere, as there are many factories in the towns surrounding Toronto. It takes hours to drive out into the wilderness, which is very atypical compared to most of Canada. Like any big city, there are people everywhere and everything is always under construction. It’s overwhelming and exciting at the same time.

The best part of Toronto is the constant excitement of something new to do.

The best part of Toronto is the constant excitement of something new to do. I’ve made close friends of different backgrounds and identities by living here, and I’ve learned a lot from them – which has drastically expanded my worldview. Toronto also has many opportunities to make money as an artist, with people coming from around the world, to attend events such as the Toronto Comic Arts Festival.
The worst part about living in downtown Toronto is the disconnect from nature. Growing up in Calgary meant always being within walking or biking distance from a nature park, and the complete wilderness of the Rocky Mountains is only a 45-minute drive away. I miss the easy access to clean air and tranquillity, and I often feel anxious living among construction, noise, and tall buildings. I take every opportunity to go to a park or leave the downtown core to recharge.

According to my parents, I was first introduced to art as a toddler by a very encouraging babysitter. She would buy me a pack of markers and draw with me, and I took such a liking to it that becoming an artist was my main goal in life ever since. I never thought much about it from that point on; it just became a permanent part of my life.
When I was in high school, I discovered the work of Yuko Shimizu online and was introduced to the concept of Illustration, which was a huge revelation! Since I already enjoyed reading books and newspaper articles, and I was drawn to the idea of how art simplified and explained complicated concepts, illustration seemed like the perfect marriage of both the things I enjoyed.
From then on, I began studying the trajectories of well-known illustrators, built my portfolio, went to art school, and majored in Illustration. Since then, it’s been a lot of emailing art directors, managing different jobs and clients, tabling at zine fairs, and still working part-time jobs. I’m still just getting started.

According to my parents, I was first introduced to art as a toddler by a very encouraging babysitter. She would buy me a pack of markers and draw with me, and I took such a liking to it that becoming an artist was my main goal in life ever since.

Luckily, my family was very supportive from the beginning, despite not having an artistic background. Since I never expressed interest in anything except for a creative career, they never tried to discourage me from it. They paid for all the art lessons I could have wanted growing up. But they also see Canada as a much more forgiving place for pursuing your passions, and if we never left China then maybe they would have seen becoming an artist as too risky, too competitive, and too expensive.
My parents’ immigrant friends, however, still had a more traditional Chinese mindset, and I felt powerless as I watched them discourage their children from pursuing art. Part of my motivation for success is to simply prove that it’s possible – and so I can return to my community and help other young creatives gain confidence in themselves.

As a freelancer, I want to work with more clients, get higher profile jobs, and basically make enough to live comfortably while being primarily an illustrator. Beyond the money, I want to create things that are meaningful or have informative value. I love working on projects that are heavily research-based, such as a comic on climate science or a poster for Arctic conservation. These projects also tend to help the world as well and get me to think about how I can apply my practice in a more ethical way. Although I’ve done some art to accompany short stories, I’ve not done full book illustrations yet and I would love to illustrate a cover or a whole book or make an entire graphic novel. I also want to paint more murals.

I love working on projects that are heavily research-based, such as a comic on climate science or a poster for Arctic conservation. These projects also tend to help the world as well and get me to think about how I can apply my practice in a more ethical way.

Probably Yuko Shimizu! I also want to give her a big thank you. Also Hideaki Anno, or Victo Ngai.

God bless close female friendships! I’m surrounded by women who are also either illustrators, artists, or designers, whom I’ve met while attending OCAD. They’re always willing to listen and to empathize, and it’s a very supportive community. Outside of school, my extended family is also held together by multiple generations of women. There’s a special energy when we all get together, and I’m very comforted by it.

There’s a special energy when we all get together, and I’m very comforted by it.

Sad to say, there weren’t any that I had access to. My parents didn’t have any artistic friends, and Calgary was a more conservative place in general back then. As a kid, I discovered artists mainly online, either by torrenting anime and manga or by going on DeviantArt or Tumblr. Also, creative people have a tendency of leaving small towns for bigger opportunities. I didn’t even realize until I had moved Toronto that famous illustrators, such as Lauren and Jillian Tamaki, had also grown up and gone to school in my hometown, only to later move to Toronto or New York for their careers.

I’ve never experienced anything personally yet since I’m just getting started, but even without overt discrimination, there is always the fear of being taken advantage of. I’m always thinking about what a male illustrator would quote for the same job, and what a client would be willing to pay them – and in response to that thought, I’m also always trying to build my confidence and quote higher, reminding myself that I’m worth it.

Just go for it! Hone your fundamental skills as well as your creativity to become a better-rounded individual.

Just go for it! Hone your fundamental skills as well as your creativity to become a better-rounded individual. It will also encourage clients to consider you for more different types of work. Have a lot of discipline and remember that your first idea is rarely ever your best; make more roughs, always try to find new ways to solve visual problems, and never settle for what looks cliche or done before. Don’t undersell your art, because it has a negative impact on every illustrator in the industry and devalues our work. Maintain your sense of self-worth, and never, ever, let “not feeling ready” as an excuse to stop yourself from trying something. Table at zine fairs, reach out to clients, and talk to new people, and apply to all the opportunities you can. You’ll never be ready until you try!