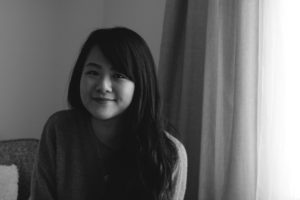 I’m a 2D animator based in London. I was born and raised in Germany, but my parents are from Shanghai, China.

London is a huge creative hub! Coming from a very quiet, small German town I’m always amazed at how many opportunities there are to get inspired: Exhibitions, museums, galleries, but also workshops, meet-ups, and regarding my job, animation studios – both established and up and coming. As a bonus, the exchange between creatives and also non-creatives is super interesting because this city is so diverse which can be a wonderful world expanding.

London is a huge creative hub!

The best: Definitely the open-mindedness and diversity, the many possibilities to tap into other people’s work and minds, and the many cinema events, panels, festivals, theatres, etc where I get to see some of my favourite movie makers, composers, actors, writers…

The worst: Renting costs, the Underground during rush hour, and more recently, of course, the uncertainty of Brexit.

I had no idea what to do after graduating school, I just liked drawing – so I studied communication design in a sweet German city called Augsburg. “Communication design” in this case means, I was able to try anything between typography and graphic design, illustration, photography, even calligraphy. We also had a motion design course where I got in touch with After Effects and Flash for the first time. I worked as a VJ resident at a techno club for two years which gave me the chance to experiment with animation, but I was a little aimless. After receiving my bachelor’s degree I felt like I had an idea of all the above courses but wasn’t proficient in any of them to make a living, so I’ll be forever thanking my university mograph teacher who encouraged me to collect some experience abroad. That’s how I ended up as an intern at Golden Wolf in London; my original plan was to return to Germany after a few months, but it turned into an employment for more than two years! I then started freelancing 2018 and since then have been lucky enough to get to work with amazing talents and studios like Oddfellows, The Line, and of course Golden Wolf.

After receiving my bachelor’s degree I felt like I had an idea of all the above courses but wasn’t proficient in any of them to make a living, so I’ll be forever thanking my university mograph teacher who encouraged me to collect some experience abroad.

Yes, and I’m especially grateful to my parents. Their education was harsh and exactly what you would imagine what it is like to grow up in China during the cultural revolution. When they moved to Germany, they started from zero and have had amazing careers since then – and yet they have never put pressure on me to get a more “secure” job than what I’m doing at the moment. Of course, they have expressed their wishes (“why not become an art teacher?”), but when my mind was set on studying communication design, taking an internship in London, going freelance… they’ve always been very supportive as long as I’m able to make a living for myself and give my best to do so.

Not an easy question for me at the moment, my biggest goal now is to actually find a bigger goal other than improving on the job. There are definitely wishes like trying to accept only jobs that are meaningful to me personally and/or our community, environment, or even future generations, but those, unfortunately, don’t just fall into your lap. Since I’m not very far into my career yet, I have hopes to find a good balance though! And maybe even branch out of animation and try new things.

Not an easy question for me at the moment, my biggest goal now is to actually find a bigger goal other than improving on the job.

I always listen to film scores while working; Michael Giacchino for a short film, that would be something!

So supportive. London is home to groups, meetups, and workshops specifically aimed at women who all connect with and learn from each other. The community is incredibly gentle and welcoming and both my family and friends share that mentality.

The community is incredibly gentle and welcoming and both my family and friends share that mentality.

I don’t think so – simply for the reason that I wasn’t very well informed. Sadly, Germany doesn’t have a very strong cultural background, education, and industry regarding illustration, comics and 2D animation, so in the end, I only found out I was interested in animation a couple of years ago!

I think female artists still tend to be more timid about asking for the payment and jobs they actually want, not much different from other industries. Here in London, I’ve never had any bad experiences, but I did learn that a client or studio will rarely tell you if your day rate is too low. Not out of hostility, they are running a business after all – but it is often women who ask for less.

Apart from that I actually see positive changes in the short time I have been here, a lot of studios are actively trying to keep a good balance when hiring people for example.

Follow your passion, but don’t burn out. Mental health is just as important as physical health. And: reach out to/connect with other women in your field if you’re generally shy about approaching people! You’ll find your experience is similar to others and it can be endlessly helpful to realise that you’re not alone. 🙂