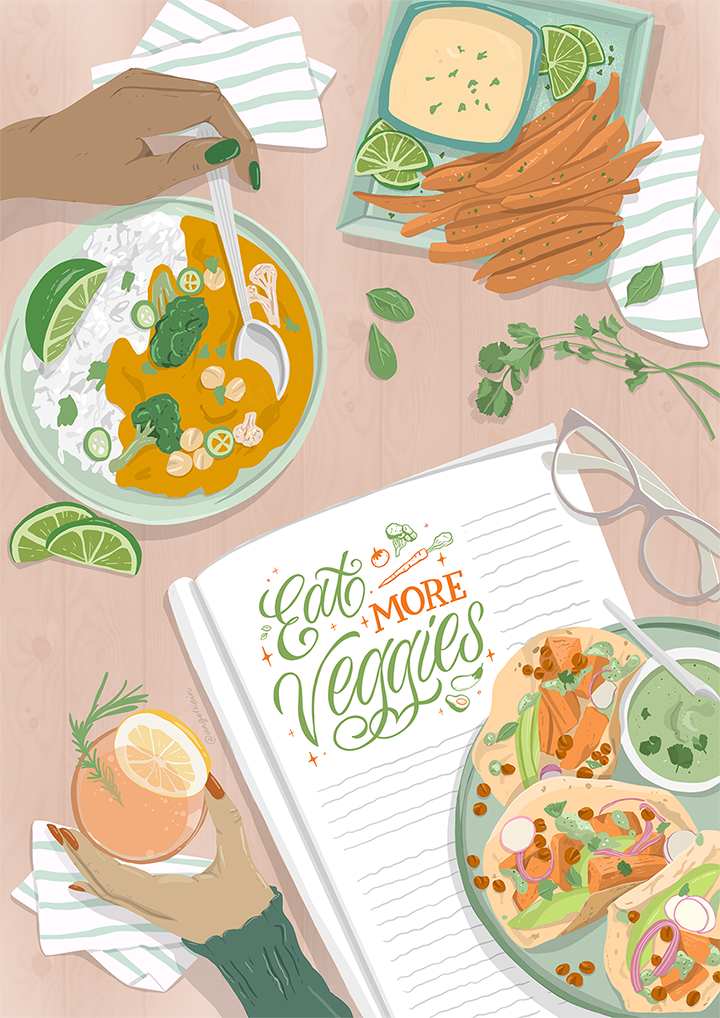 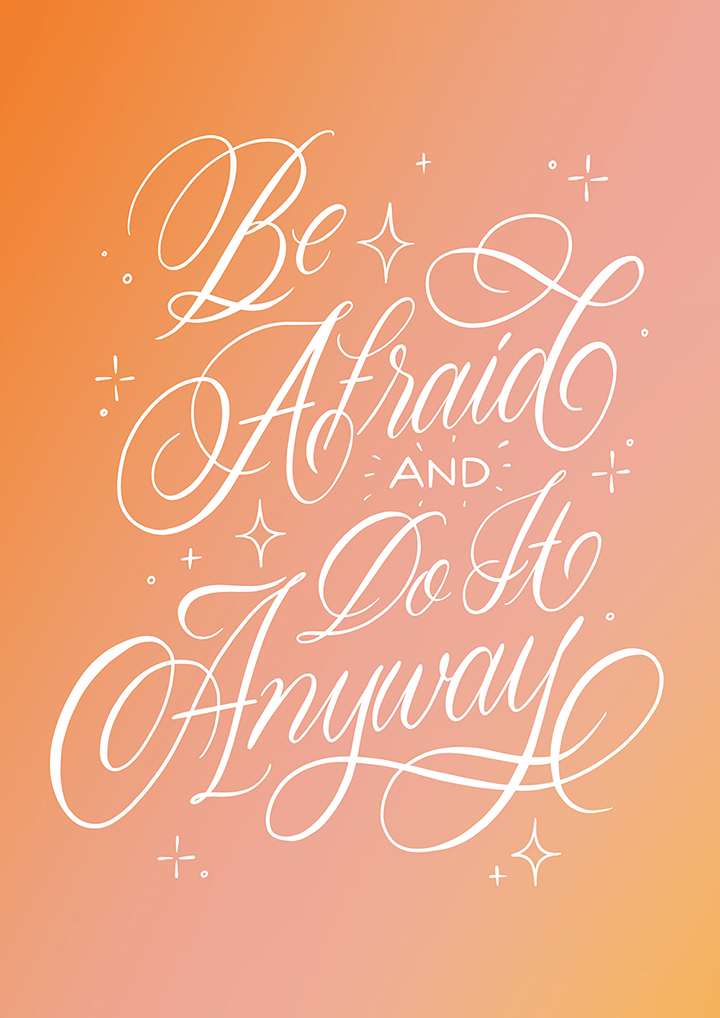 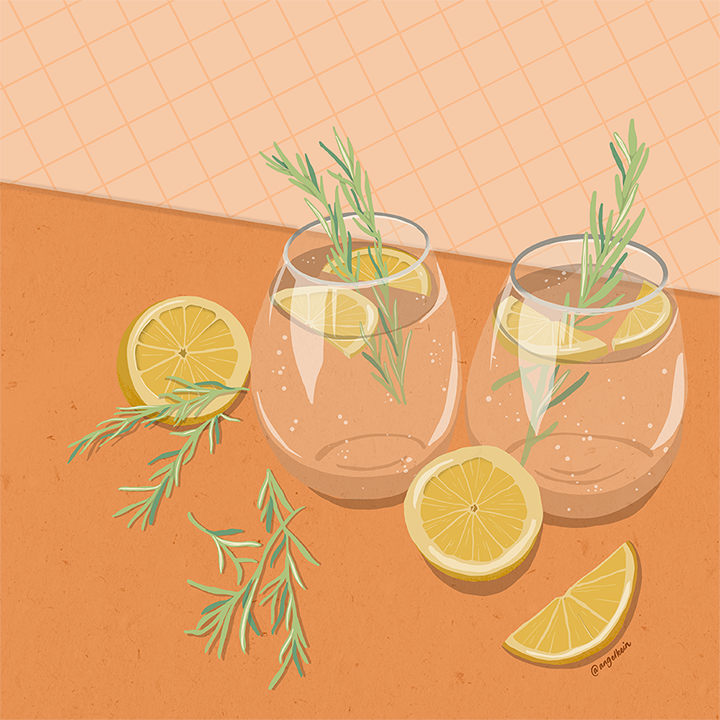 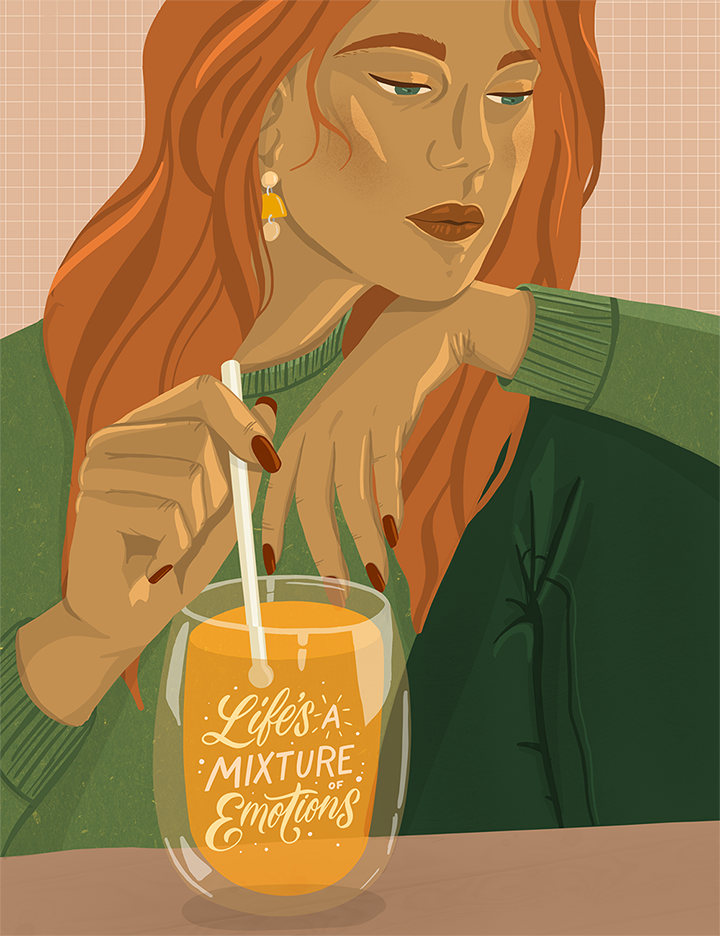 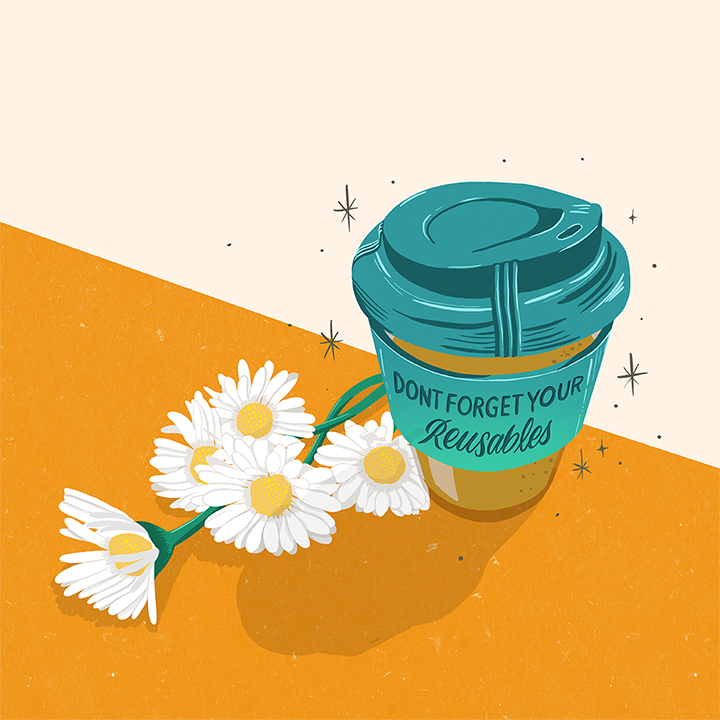 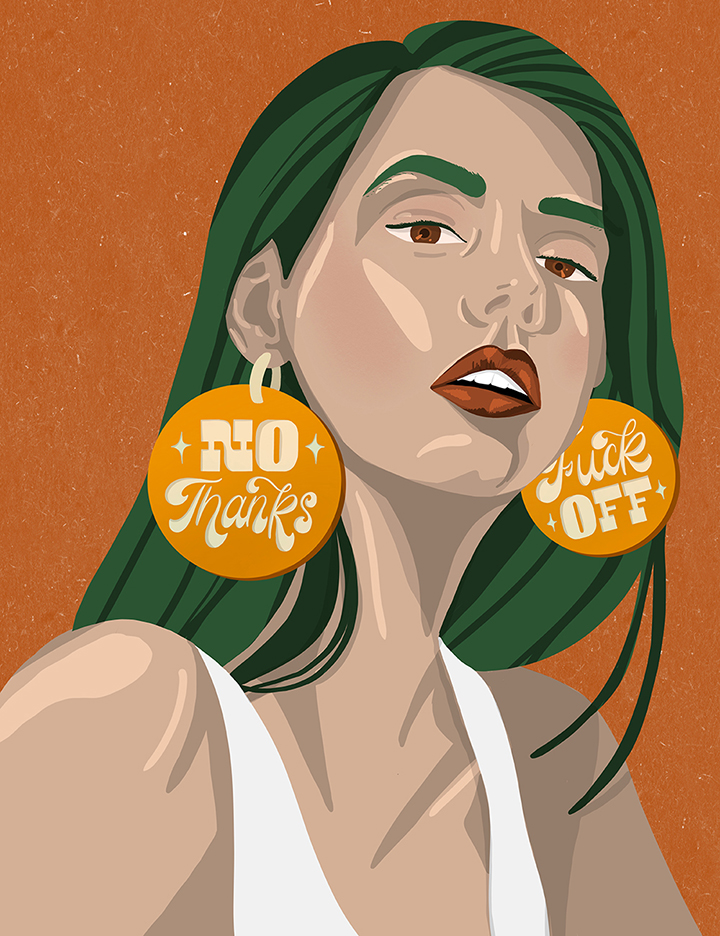 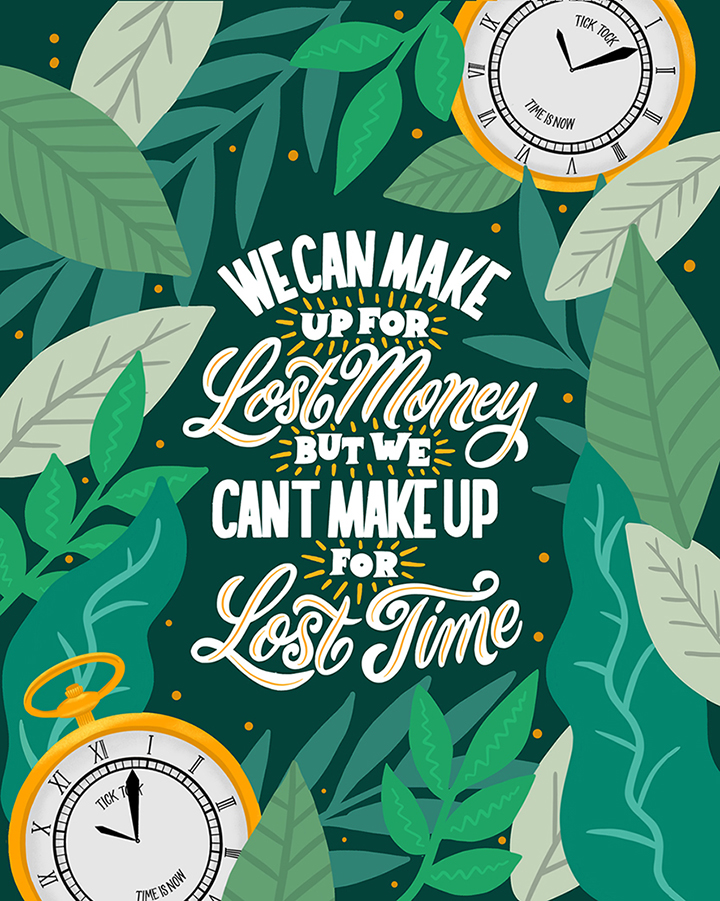 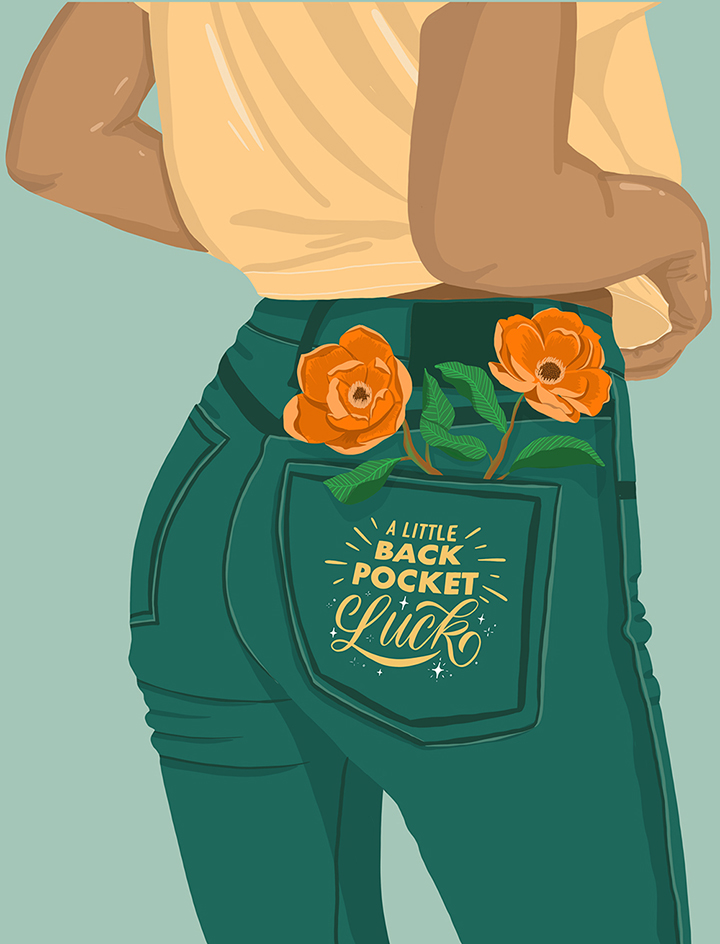 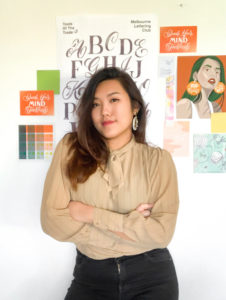 I’m a lettering artist, illustrator, and graphic designer. I’ve always been a creative person, even as a child and prior to even knowing there are literal professions for what I loved, so naturally, that was the path I chose despite receiving backlash for pursuing a creative career. It’s who I am, however, and I think even if I followed a more scientific career path, I would’ve always found myself back into the arts.

Originally from Kuala Lumpur, Malaysia, I came to Melbourne, Australia to pursue a Bachelor’s in Design. The high appreciation for the arts made me fall in love with this city and it’s now where I consider my forever place.

Professionally I have worked as a Graphic Designer for several companies. During my entire career, I had always done lettering on the side as a hobby and it was only when I left to go travel overseas and van life around Australia that I went freelancing seriously in lettering, then adding in illustration. Both of which have now become the bulk of my work.

I love Melbourne. It’s full of creatives and you can see it clearly with art everywhere you look on the streets. There are events happening all the time that celebrates all forms of art and you can see people always pursuing their ideas. The city is brimming with talented people. It’s also nice to be in a city that’s so diverse in culture, it almost feels like Kuala Lumpur.

It definitely has its flaws, as with any other cities, but for the most part it’s great. I say this with confidence having traveled 19 months and really missing/realizing how lovely Melbourne is.

It’s who I am, however, and I think even if I followed a more scientific career path, I would’ve always found myself back into the arts.

The best thing is the creativity and diversity. The worst thing is ironically the opposite of the best: the over-saturation of creatives and some racism. “​In every seed of good, there is always a piece of bad”, as Marian Edelman, an activist, says.

I was first introduced officially to lettering when I was in university for a Typography class. We were all given brush pens to experiment with. From then I started experimenting with it and doing more calligraphy which morphed into lettering. This continued on even when I was working as a Graphic Designer in-house for companies where I applied my skills in addition to design. This led to small commissions and eventually, with illustration added, became where most of my freelance work came.

The funny thing is that all these labels (graphic design, illustration, lettering) were already things I did since I was a child, just without the knowledge of their formality.

I was first introduced officially to lettering when I was in university for a Typography class.

My late father had been supportive of all my creative endeavors. When I was a child, I remember him keeping all of my artwork. However, when the time came for me to decide on my career path, there were definite doubts from everyone because the creative industry was, and still is, considered a risky industry. I remember relatives trying to convince my mother that it was a mistake, especially in addition to going abroad, but luckily she saw something in my passion and supported my endeavors. Going into Graphic Design, a more commercial industry instead of the more traditional art stream, was also a better factor in convincement.

Going into a creative industry is tough, in many cultures, but more so in an Asian one. I’m glad that I did it and I’m very thankful to be able to do it.

In the nearer future, I’d like to pursue representation by an agency and go after jobs with larger companies with a purpose such as Headspace, Time Magazine, Bumble, Squarespace, and Patagonia. The older I get, the more I care to have a purpose behind my work rather than work for work’s sake.

In the far future, my plans are to have a large piece of land in the country where I can turn it into a retreat, hold workshops, and just generally have a space where people can combine their creative energy with/in nature.

In the far future, my plans are to have a large piece of land in the country where I can turn it into a retreat, hold workshops, and just generally have a space where people can combine their creative energy with/in nature.

I don’t have a specific person in mind but it has to be with someone with intentions for a greater good or purpose, not just for our egos – ha.

Strong, independent, determined and capable. It’s true what they say, you are who you surround yourself with and I surround myself with people who inspire me.

When I was growing up, I didn’t know much about the creative industry and wasn’t exposed to much of it. There were definitely female creatives work that inspired me through Tumblr but my lack of knowledge about the field meant that I didn’t follow anyone too closely. This was pre-Instagram days too so there’s no curation of the feed.

As of yet, not much or any that I have experienced much of, but it might be probably because it has been repressed all that negativity in the depths of my brain. There is a definite challenge that I hear quite often from other female creatives, like finding out that their male counterparts were offered a larger amount of payment for the same work. There is still much to improve on but there is also a definite shift towards more equal treatment. It’s empowering to see so many females who’ve risen and are rising up in the creative industry. Movements like Girls Club Asia is also great in highlighting more women in the field. There are no excuses now for people to not find diversity in talent in creating or representing their brand because it’s just a Google away.

Have vigor and perseverance in your pursuit of a creative career.

Have vigor and perseverance in your pursuit of a creative career. If it’s really something you love, go for it with all your strength because this is a choice that requires passion. The most successful people in the creative industry are devoted to it and if it’s anything less, you might fall into mediocrity.

In saying that, stay humble and always keep learning. You don’t know it all even if you feel the gumption running through your veins. The sooner you open yourself to new experiences, the quicker you can sponge up new knowledge.

Lastly, always be honest about who you are and know that it’s okay if that changes. You might feel like if you are honest about who you are, your audience or clients might not relate and be deterred. That could happen, but they are ultimately not your truest supporter. There are 7.5 billion people in the world and it’s a guarantee that there will be others who can relate to your honesty. When you liberate yourself from a fake persona, even if it’s a subconscious one, you free yourself up to create greater things.