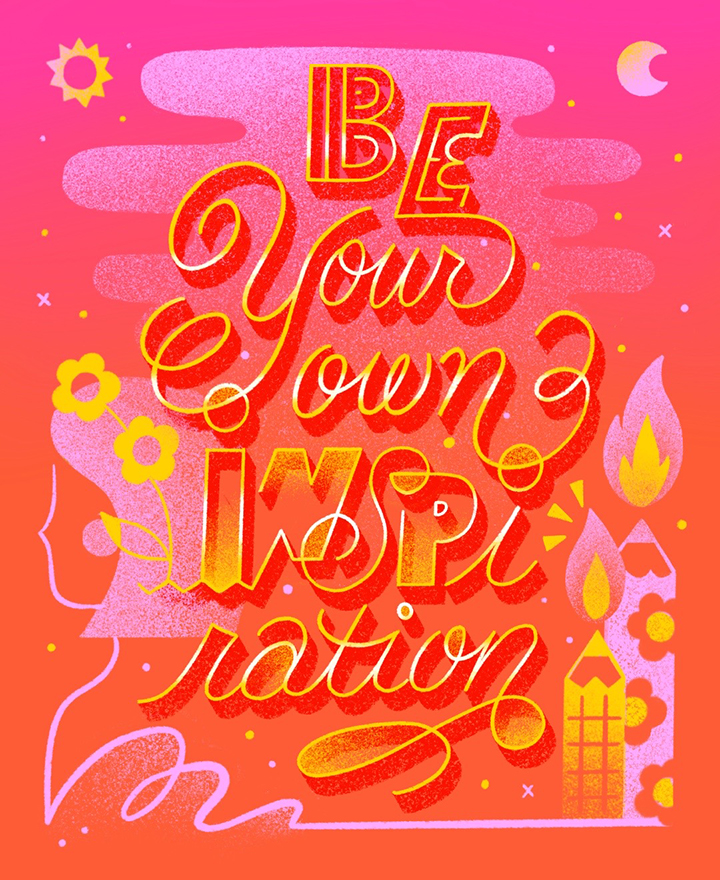 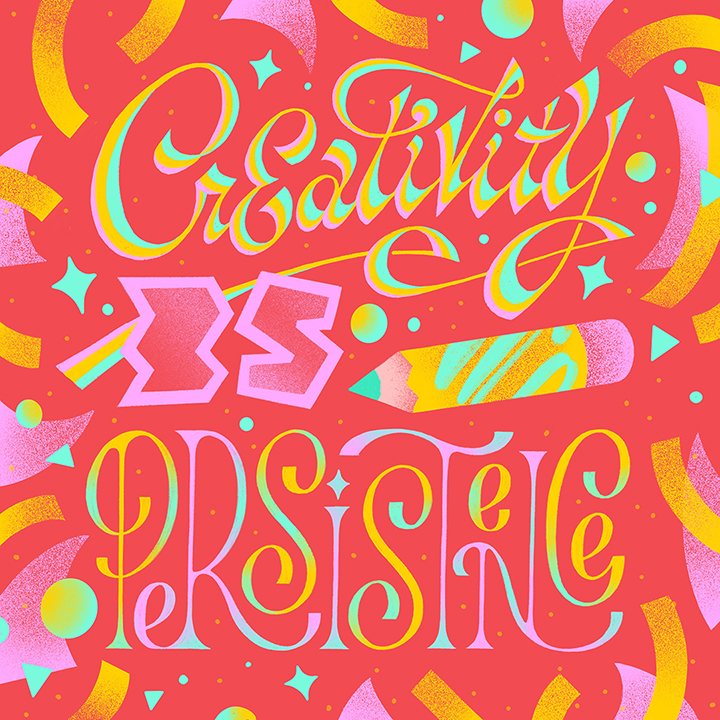 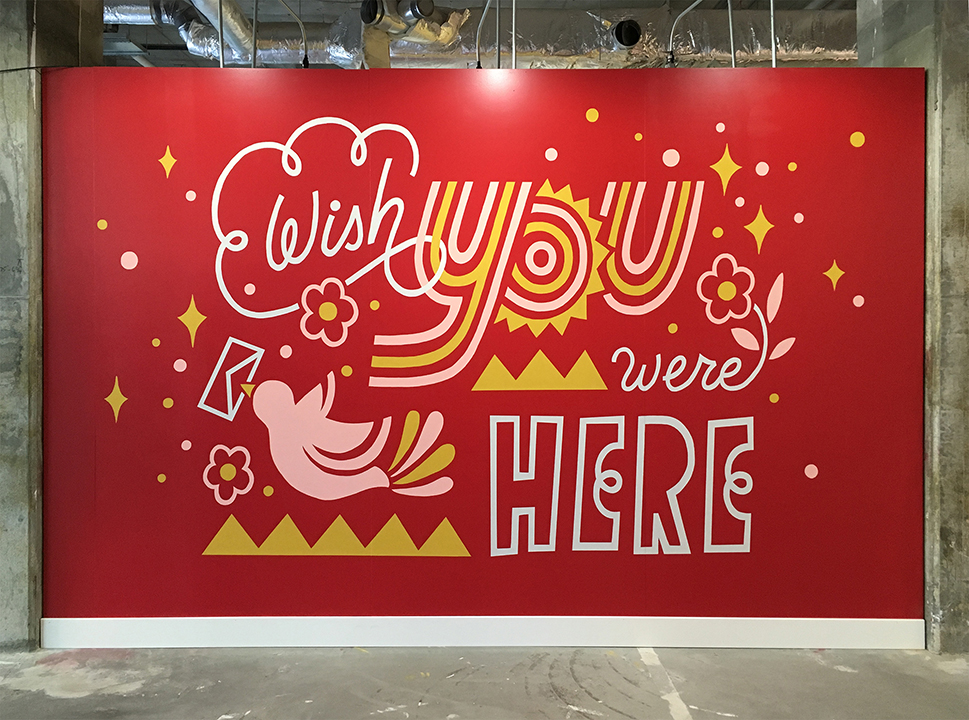 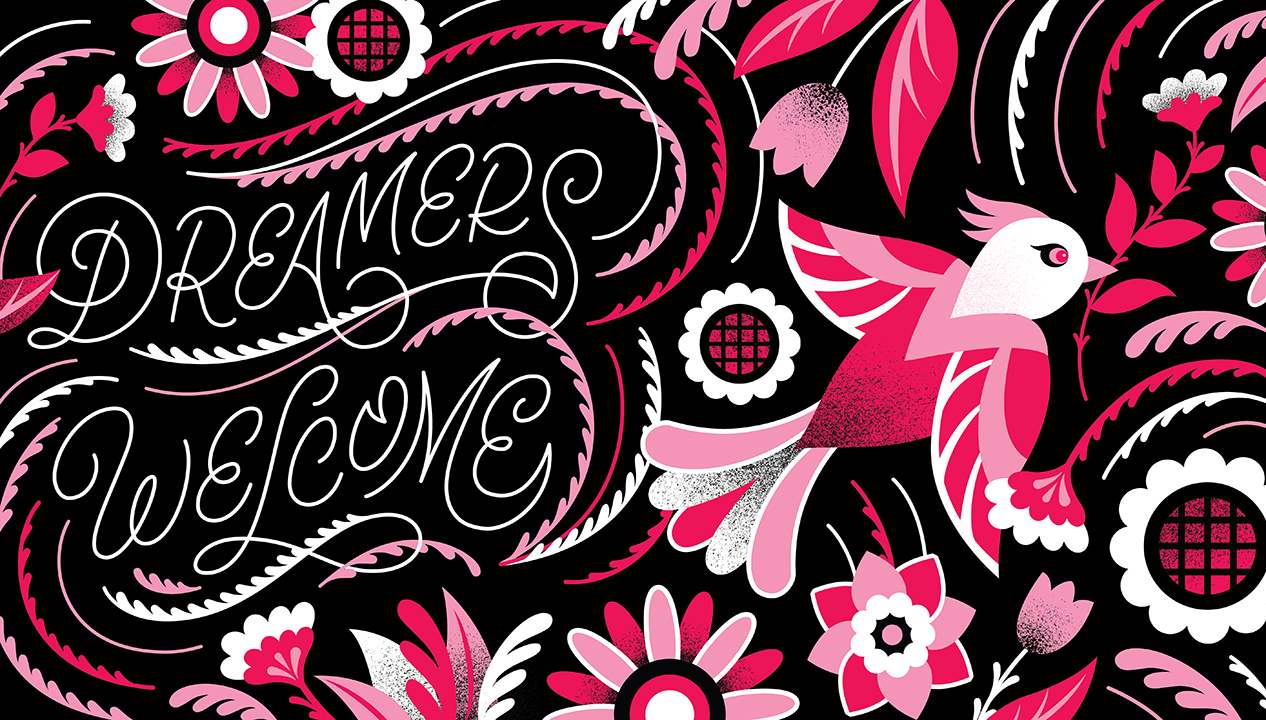 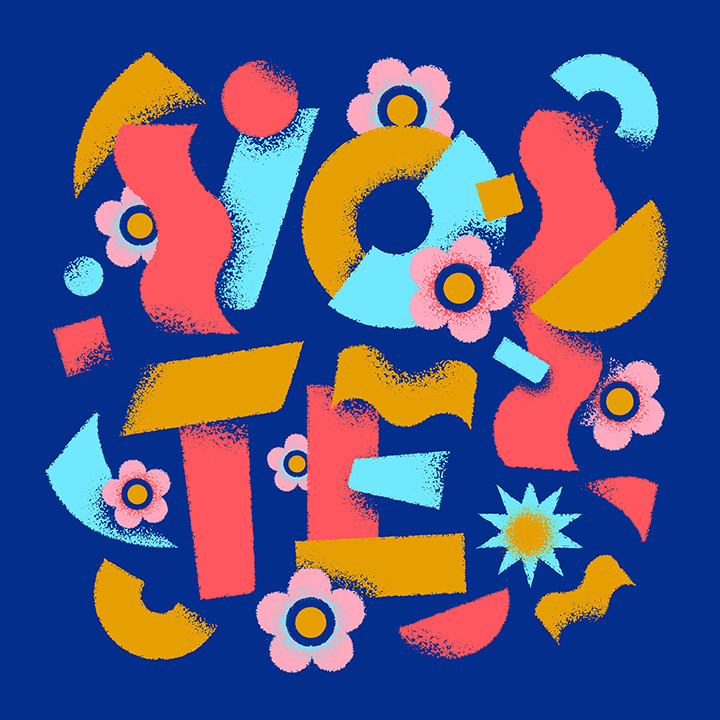 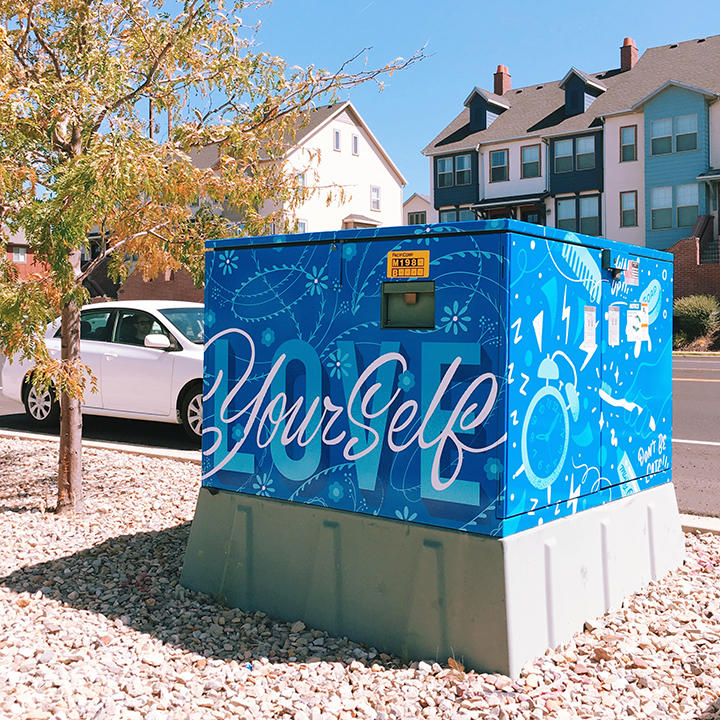 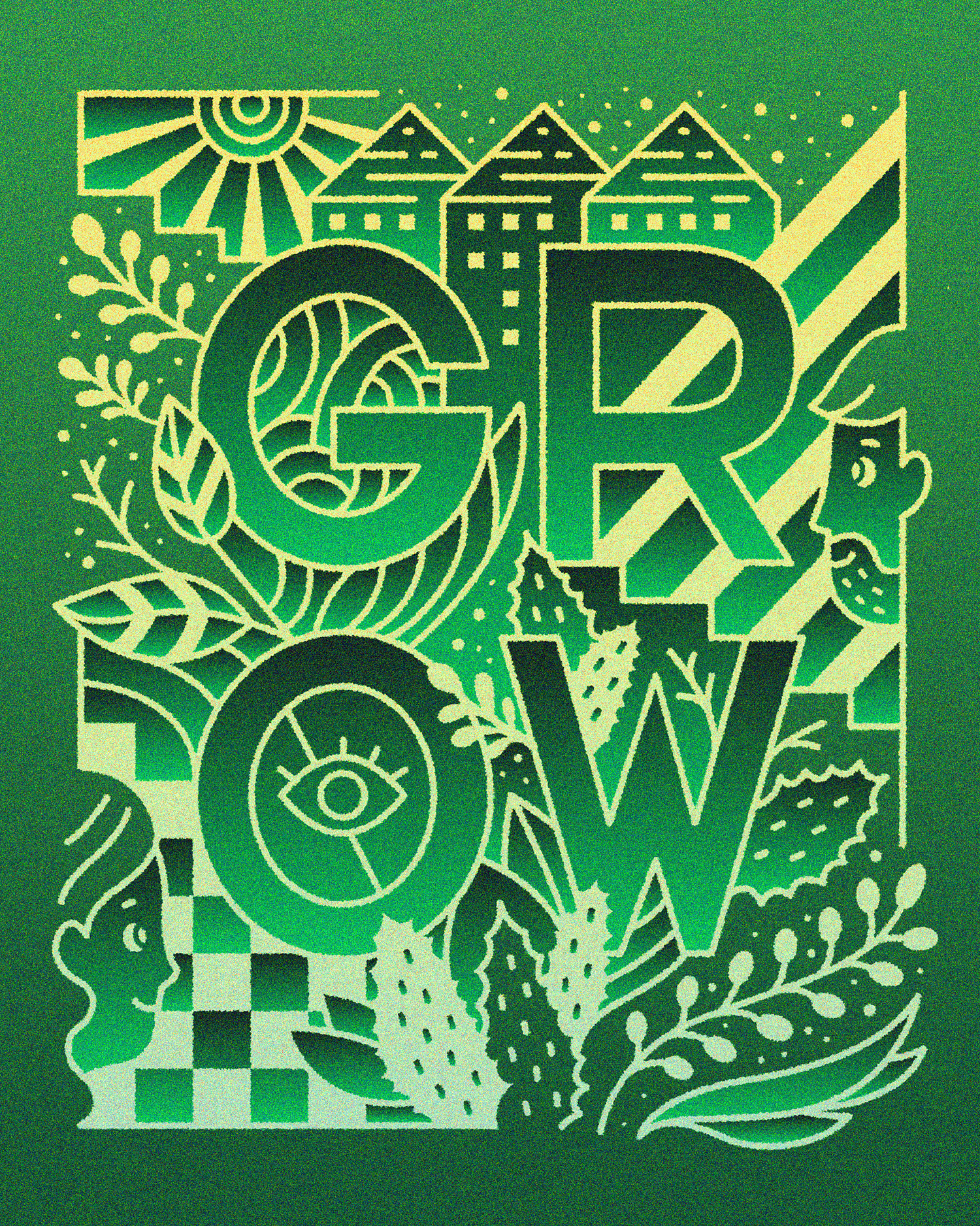 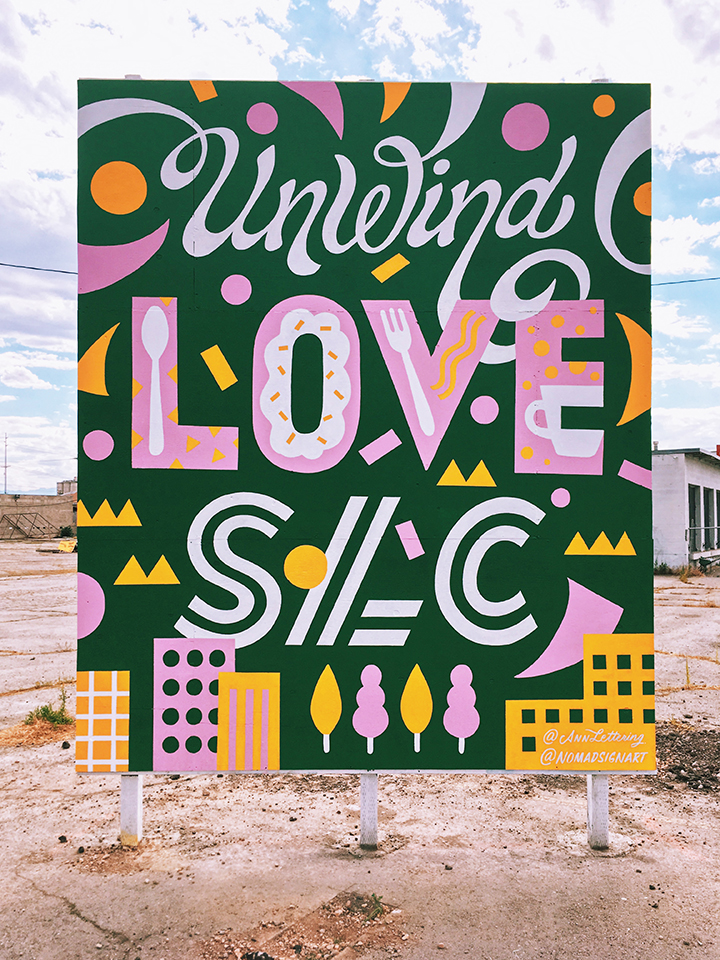 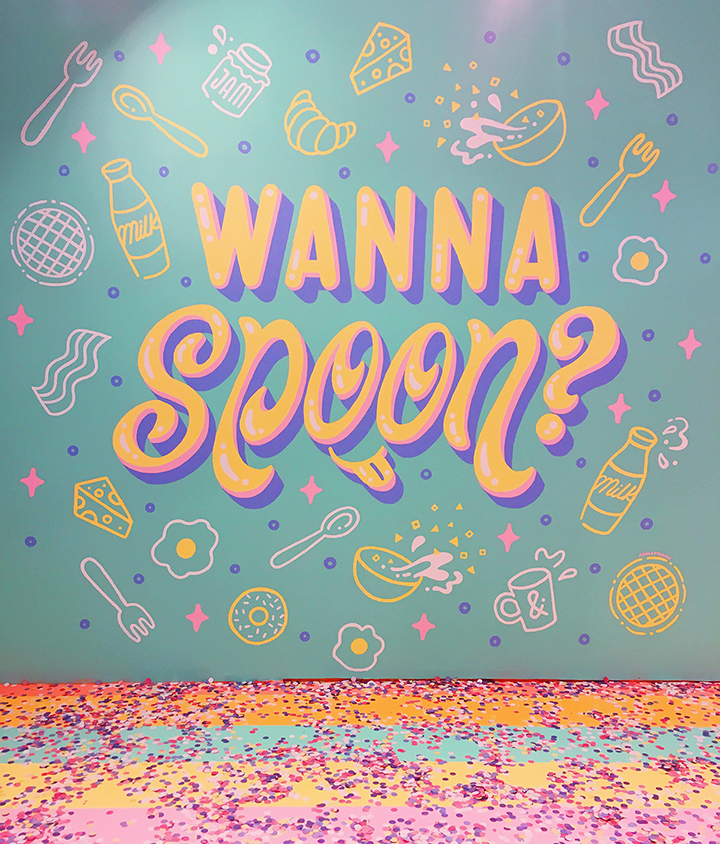 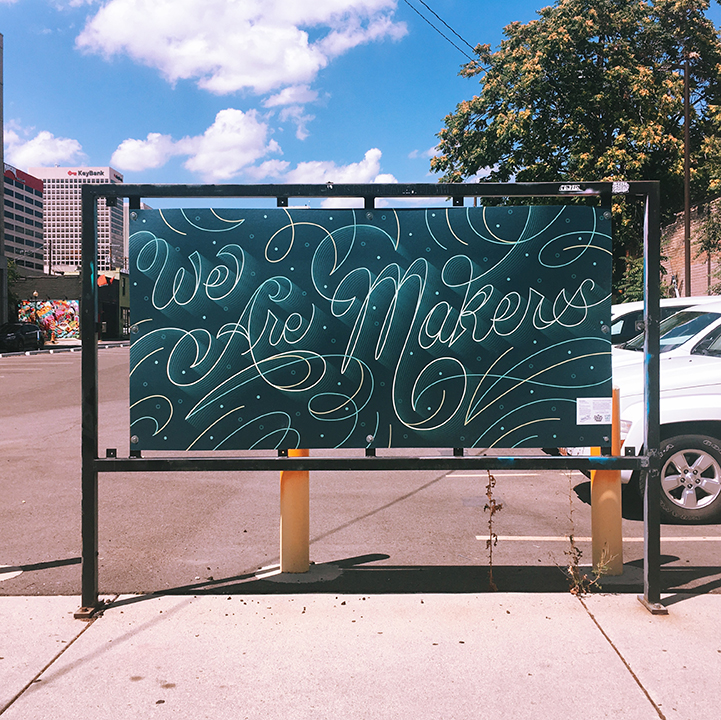 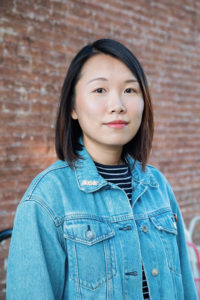 I’m a lettering artist and illustrator living in Salt Lake City, Utah. I was born in Taipei, Taiwan where my family and I lived until we immigrated to the U.S. when I was 9 years old. I’ve been in Utah for 18 years and I graduated from Utah Valley University with a BFA in Graphic Design. I worked as an in-house designer for 4 years before making the leap for freelance full-time. Since then, I’ve been focusing on custom murals and lettering-based illustrations. I spend most of my time working from my home where I live with my husband. I’m a bit of a homebody but I love traveling and exploring new places. I’m always on the hunt for authentic Taiwanese baos and braised pork rice whenever I’m in a new city.

Salt Lake City is more diverse and liberal compared to the rest of Utah. The local culture is all about hiking, camping, and skiing. It can be hard to find your tribe if you’re not outdoorsy but the people are very friendly. There are farmers markets during the summer and fall and plenty of festivals throughout the year. The city is very supportive of the arts and there are beautiful murals throughout Downtown. It doesn’t have that big city feel, SLC is more quiet and mellow compared to other metro cities where people seem to be on the go at all times.

The best thing is Salt Lake City has multiple communities dedicated to different fields of art and design with events and shows that help people like me grow, stay inspired, and connect with other creatives

The best thing is Salt Lake City has multiple communities dedicated to different fields of art and design with events and shows that help people like me grow, stay inspired, and connect with other creatives. The worst thing is finding parking at these things and driving in the snow.

I started dabbling in the art of illustrating letters during my senior year of college. At the time, I was learning about type designers in my design history course and I noticed people on Instagram doing lettering. I was immediately attracted by all the fancy script and flourishes people were doing and it was fun seeing how other artists give words and phrases another layer of personality through different styles. I already enjoyed writing in cursive so it was easy to jump in and start playing with lettering myself. I decided to take it more seriously and worked on a semester-long BFA art project where I drew names of friends and family. After graduation, I went on to work as an in-house designer doing things like packaging, emails, web and social media graphics in multiple industries including tech, beauty, and home goods. Lettering was a creative outlet I pursued after hours, although I would try to incorporate it whenever I saw an appropriate opportunity at my day job. I took on some small freelance work in between like lettering for bags and t-shirts and custom logotypes. As my 9 to 5 job grew less fulfilling and interesting, I became more passionate about lettering, created more work and shared them on Instagram. I befriend other artists on Instagram and started dreaming about freelancing full-time. Seeing others creatives support themselves through freelance and land commercial work with lettering made me realize it’s something I can do too.

Seeing others creatives support themselves through freelance and land commercial work with lettering made me realize it’s something I can do too.

My parents have been supportive of me from the start. In Taiwan, they enrolled me in after-school art classes and I attended an arts program offered by the elementary where students explored different mediums, practiced calligraphy, and studied art history. Their investment in me and the arts was uncommon for Taiwanese parents in a city where after-school math and science tutoring schools are omnipresent. Perhaps they thought it was a phase I would go through but I’m grateful they allowed me to be creative as a kid. I continued to immerse myself with art classes offered at school in Utah. I knew I would pursue design in college and while my parents supported my decision, my dad would try to persuade me into double majoring in something “practical”. They worried I wouldn’t be able to support myself despite being proud of my artistic abilities. They didn’t see design and art as a viable field until I proved them wrong after working my way up from making $42k to $75k during my career as an in-house designer. When I announced I was leaving my job to pursue freelance, they tried to convince me to find another design job with benefits and a stable income. However these days, they’ve seen the fruit of my labor in tangible forms like office murals, magazine covers, and t-shirts. My parents are equally excited as me when I tell them about the bigger clients I’ve landed and are happy that I’m finding fulfillment and freedom as an independent artist.

I would like to do more live lettering and murals, especially for clients who are in the tech space within Utah. I also want to teach a workshop on lettering and build a licensing portfolio catered to the stationery industry.

I would like to do more live lettering and murals, especially for clients who are in the tech space within Utah. I also want to teach a workshop on lettering and build a licensing portfolio catered to the stationery industry.

I would love to collaborate with activist and actress, Sophia Bush. She’s a founding member of the Time’s Up movement and has a podcast called Work in Progress where she interviews people who inspire her. I love how curious she is about the world and that she uses her platform to encourage others to care about politics and social issues.

Entrepreneurial, ambitious, and uplifting. There are lots of businesses owned by women and a few co-working spaces founded by women with facilities and services that a traditional space might not have, such as breastfeeding rooms and on-site childcare for working moms. There is a willingness to share their knowledge and to support one another. Utah is still very much a conservative state but there is a growing community of smart and driven women changing the social landscape and I’m constantly inspired by their stories.

When I was in junior high, I looked up to my English teacher. She was also over the school yearbook and student newspaper. I learned how to use layout design programs in her class, which was my earliest entry to graphic design. I remember her as a fierce, confident, and kind woman who encouraged her students to express our emotions through writing and not be afraid to speak our minds.

From my experience as an in-house designer for corporate offices, I know the gender wage gap is real from initiating candid conversations over salary with co-workers. Women are the majority in creative fields but make about 32% less than men. I think hiring managers are still making decisions based on the traditional value of men as the breadwinner of a household. And women are reluctant to negotiate or ask for higher raises because of social norms that expect us to be team players and to go along with whatever’s offered. Even now as I’m freelancing, I sometimes find myself in positions where it’s difficult to ask for more money because I’m afraid I’ll be punished and the opportunity would be taken away from me. However, on the occasions that I have asked, especially when a client is a woman, I’ve been successful in getting more. Knowing the facts and statistics made me realize how important it is to demand for what I think my skill and time are worth and I want to encourage other women to do the same.

Be willing to share your art and believe your work and voice matter.

Be willing to share your art and believe your work and voice matter. So many beginners give up because they feel their art is not good enough to be shared or they worry too much about the likes and follows on Instagram. It’s really easy to forget that every great artist started as beginners. It may take years to become good at something but the hard work and time will pay off if it’s what you want to pursue and it makes you happy. Social media can be distracting and disheartening but it’s an accessible way for people from all over the world to see your work. Most of my clients found me through Instagram and for me, it’s where I can find support from people who understand the success and struggles of freelancing. I think it’s important to remember the likes and follows don’t necessarily equate to success or great work. It’s much more productive and rewarding to focus on improving your craft and honing your skills. Also, say yes to the challenges you’re excited about and don’t be afraid to fail. If you’re not failing, you’re probably not growing.