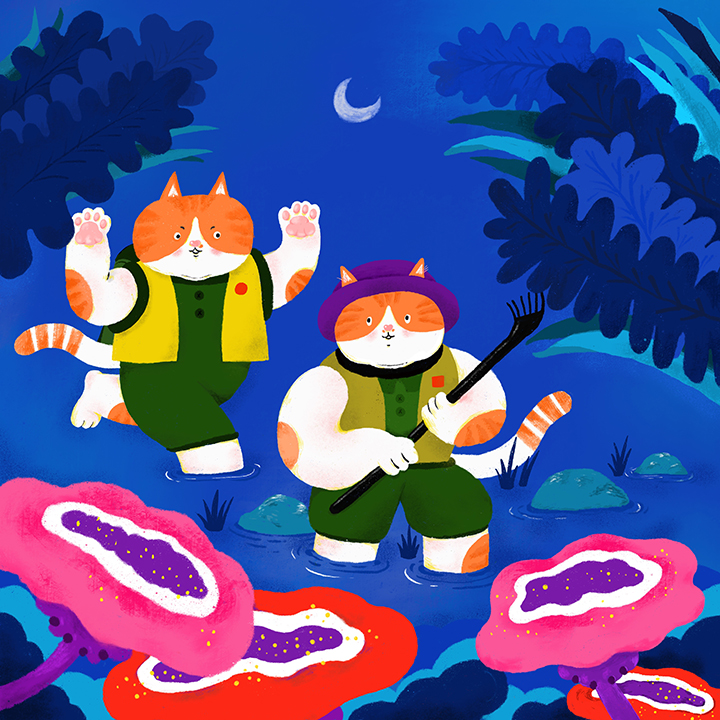 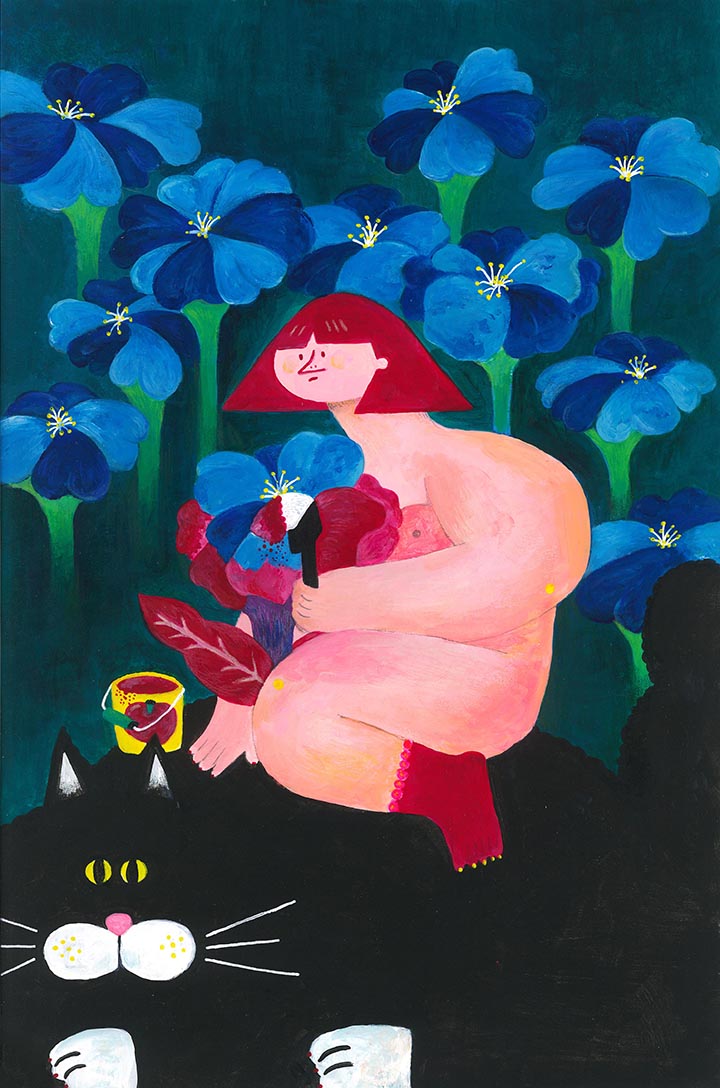 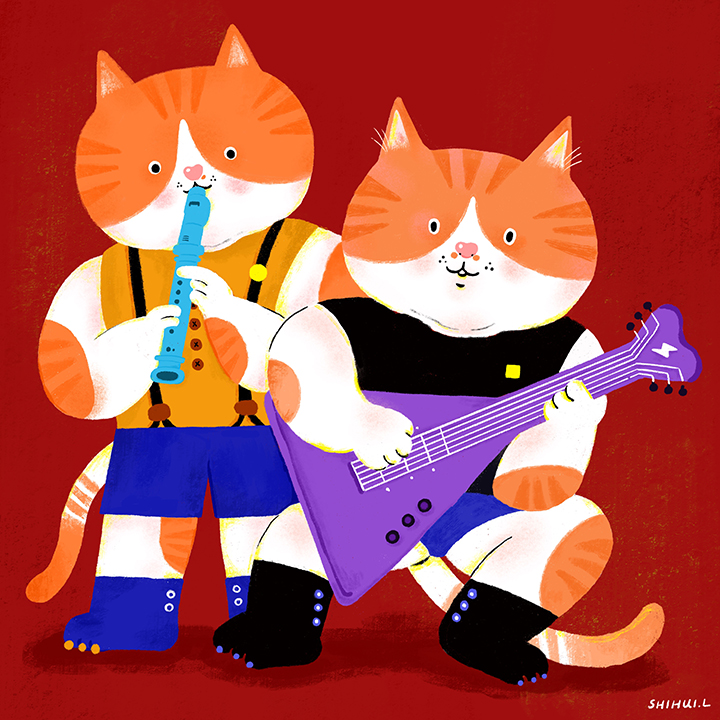 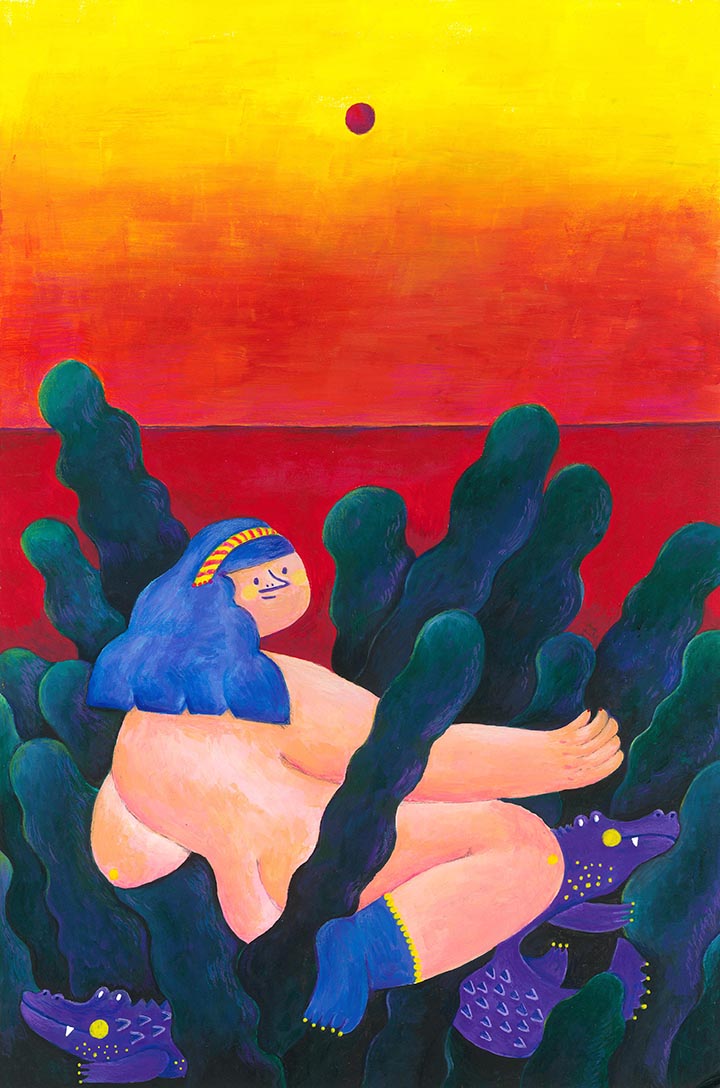 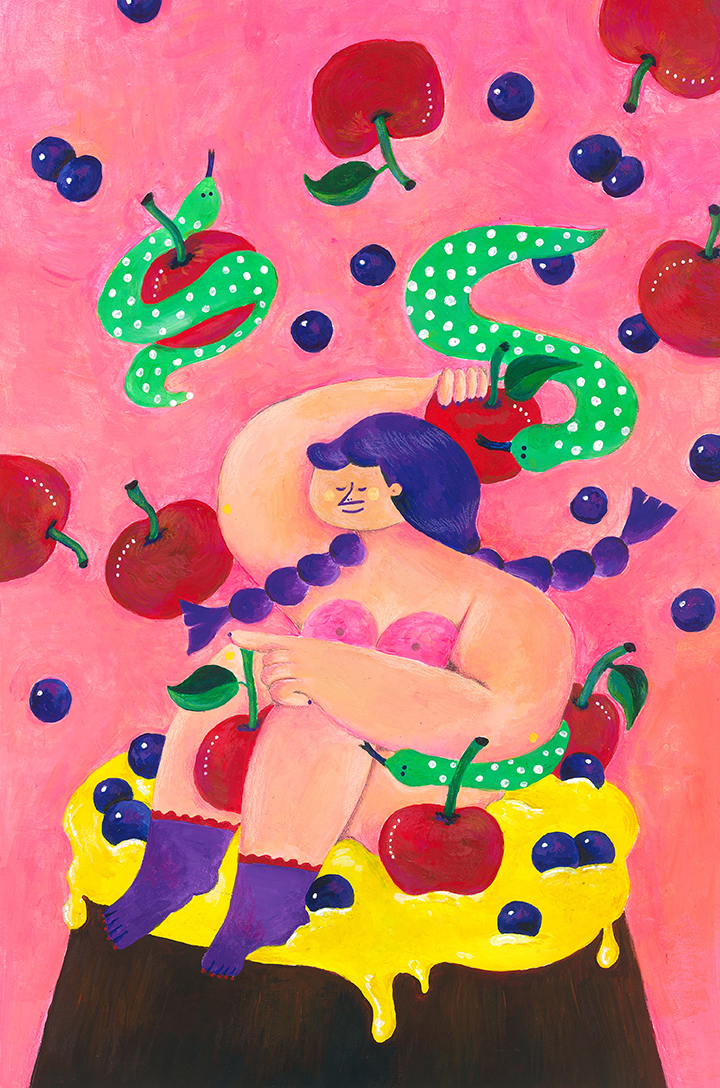 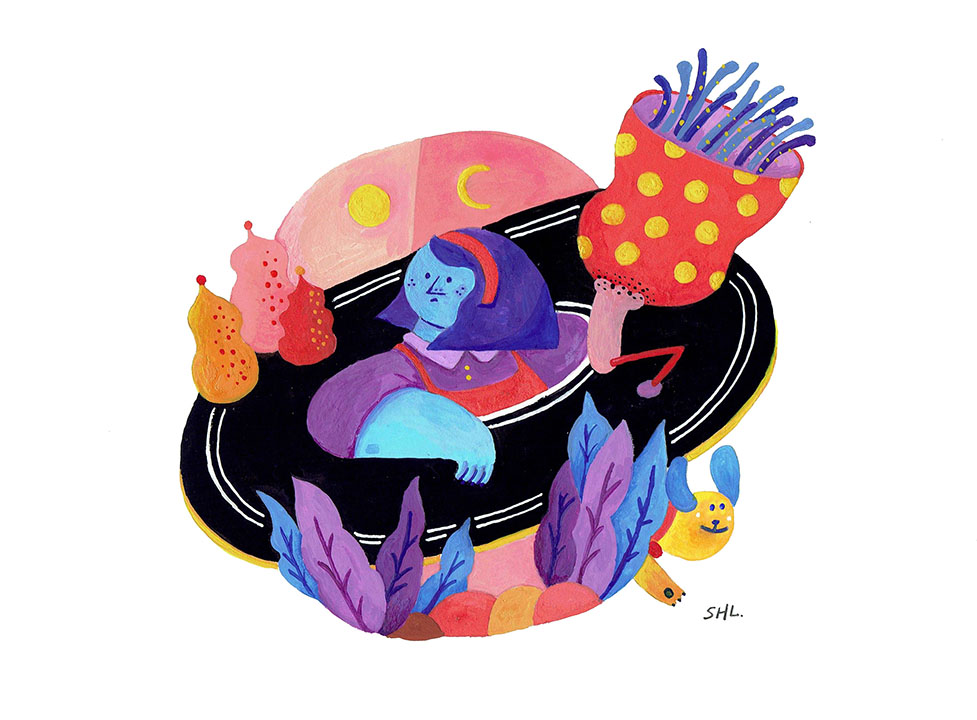 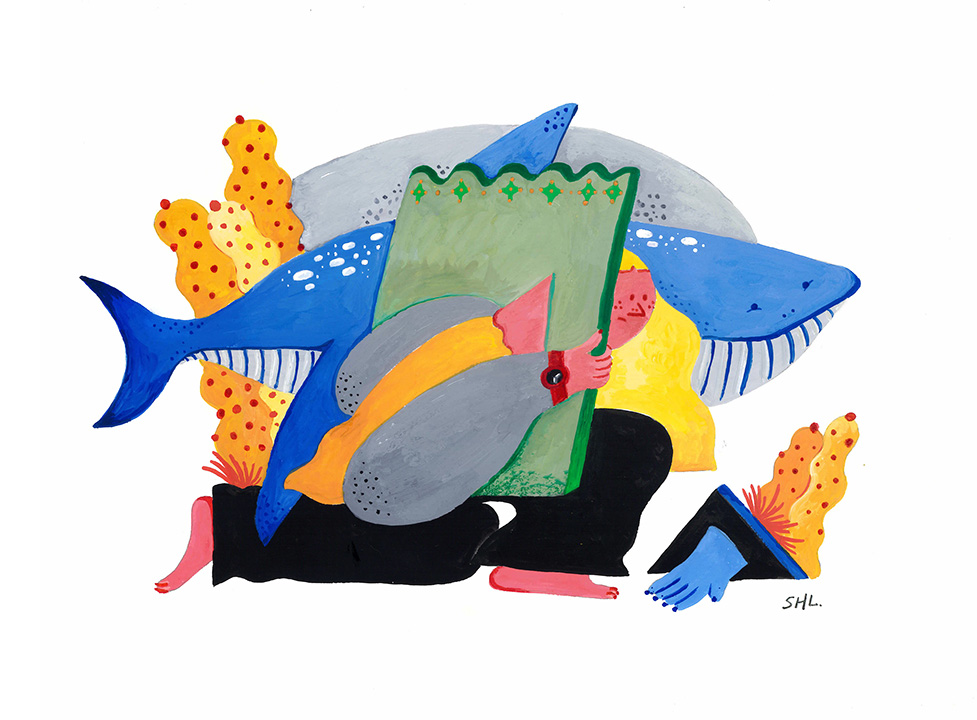 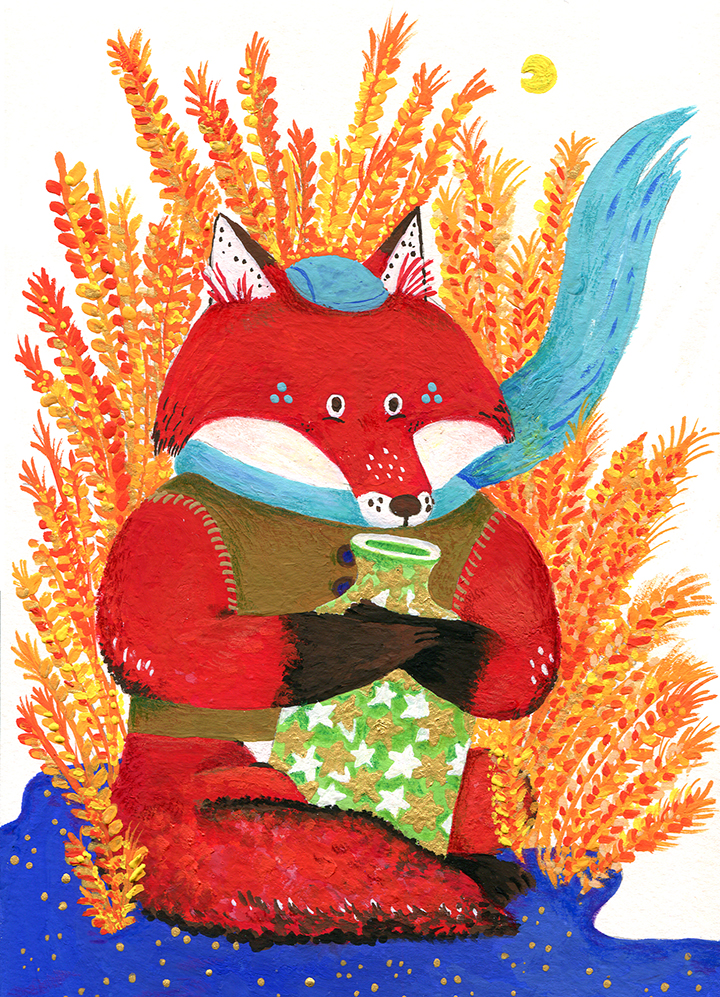 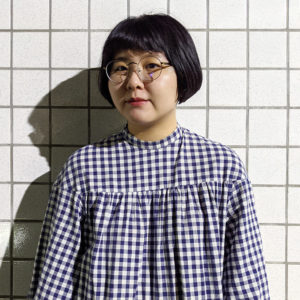 I am an illustrator and graphic designer.

I am keen on multitasking creative things. My full-time job is doing graphic design for an indie media named WuoWuo, which concentrates on animal issues. On my day-off, I spend lots of time doing illustrations and paintings. In addition to commercial illustrations, I also do artworks about females, gender, and animals. My works are usually created by advertising pigment, acrylic, embroidery threads, and digital materials.

I am also obsessed with children’s literature and collect an abundance of picture books in various types from different countries. The creative world in picture books always inspires me to some new insights. Indeed, I am a book addict, and they are an important nutrient in my life.

I have moved to Taipei since I was in college. At first, I took a while to adapt to this advanced and changeable city. People here always live a fast-paced life, try the newest materials, and hold the latest information. Sometimes I am overwhelmed by this city. You need to run as fast as you can to avoid being behind. In this constantly changing city, I always try to integrate myself into it.

I love the splendid colors in Taipei, it includes Catholic voices from various cultures but deep down I cannot totally identify with this city. My hometown is Taoyuan, it is located on the southern side of Taipei. Although it is only a 1.5-hour drive from Taiyuan to Taipei, it just feels like the distance which has always existed between us. To me, Taipei city plays a complicated role in my life.

To me, Taipei city plays a complicated role in my life.

In Taipei, you can meet various people, and get more opportunities to demonstrate yourself. It provides a big stage for everyone who wants to be seen. Taipei also holds plentiful resources. You can broaden your horizon through art festivals, exhibitions, workshops, etc.

On the other hand, the advantage also is its defect. People here must always be competitive and positive. But if you cannot slow down, you will miss the precious things surrounding you sometimes. Taipei is always crowded, narrow, and moist. It is not a suitable place for relaxing but an arena you can go to for gold.

I have been fond of art from my childhood. University was a turning point in my life. Before I majored in communication design at college, art has only been a habit. When I entered the workforce, I found myself preferring illustration over graphic design. From then on, I started to do some artworks in my free time and freelance in some cases. During this period, I attempted to use different painting techniques and extended to various subjects.

It can be said that art is a part of my life and I hope my art career will stretch as far as I can.

It can be said that art is a part of my life and I hope my art career will stretch as far as I can.

Fortunately, my career has never actually been obstructed by any other. I have many friends in the same field, we can exchange ideas and information with each other. Sometimes, I have been facing a lot of ordeals at work, it was my colleagues and friends who back me up. Nevertheless, my parents tend to be more conservative, they always suggest that I should do my works for commercial value. Although they do not block my progress by doing actual deeds, I still face pressure from their thoughts.

I am obsessed with children’s literature and picture books. Being a picture book illustrator is my dream all the time. I am always dying for making picture books, and I am planning on doing a master’s degree in children’s book illustration. I hope the stories in my brain can become a publication someday in the future. Above all, I expect myself to have the ability to dedicate myself to the industry by making politically correct and worthy books.

Being a picture book illustrator is my dream all the time.

It would be Paul Faucher, who established Père Castor Press, devoted his life to child education after World War II. Paul Faucher was a writer, educationalist, and publisher, the books he published are now considered to be classics of the children literature. Père Castor Press provided comprehensive topics on children’s books. Some stories of the books educated children about the proposition to racial equality and the belief of pacifism. I admire him for his major contribution. If he is still alive, being the illustrator of his book will be the most glorious thing in my career.

Most of them are creative, imaginative, talented and independent.

When I was a student, I adored the singer-songwriter, Anpu Chang, a lot who is also a social activist. She participated in many social movements in Taiwan, including fighting for LGBT rights, land justice, and environmental issues. In 2012, she created a song, called “The Rose-Colored You”, for all the social activists. Anpu Chang is a female creative in the music field, but she always talked about various issues to the audience gently. She is talented, knowledgeable and wise, and I expect that I can be a sparkling woman like her.

Yes. Sometimes, I’ll worry about doing some female topics within my subconscious. Depicting sensitive issues in your work, you must be brave to confront society, especially females. I am afraid of suffering the verbal attack of hate in social media. Because of that, the things I tell in my illustration works are veiled. It makes me discouraged occasionally, and it is also a challenge I want to get over.

Another aspect is not identity but the appearance of discrimination. It happened a couple of years ago, I worked on an illustration case, which was talking about the bank industry. When I finished the first draft, the client was not satisfied with the figure of the female employees. They suggested the body is too plump and that it will conflict with their corporate image. This not only represented the workplace situation of females, but it also showed the restraints of creatives.

Above all, you just need to believe in yourself.

There are plenty of talented illustrators and designers in the field. You should follow your own step instead of catching up with other creatives. Being a female creative, you are unique and glittering. The public scrutinizes females all the time, so you should try to be brave and confident to face the challenges. You can heartily express your sensitive feelings and transform them into images and stories. Above all, you just need to believe in yourself.