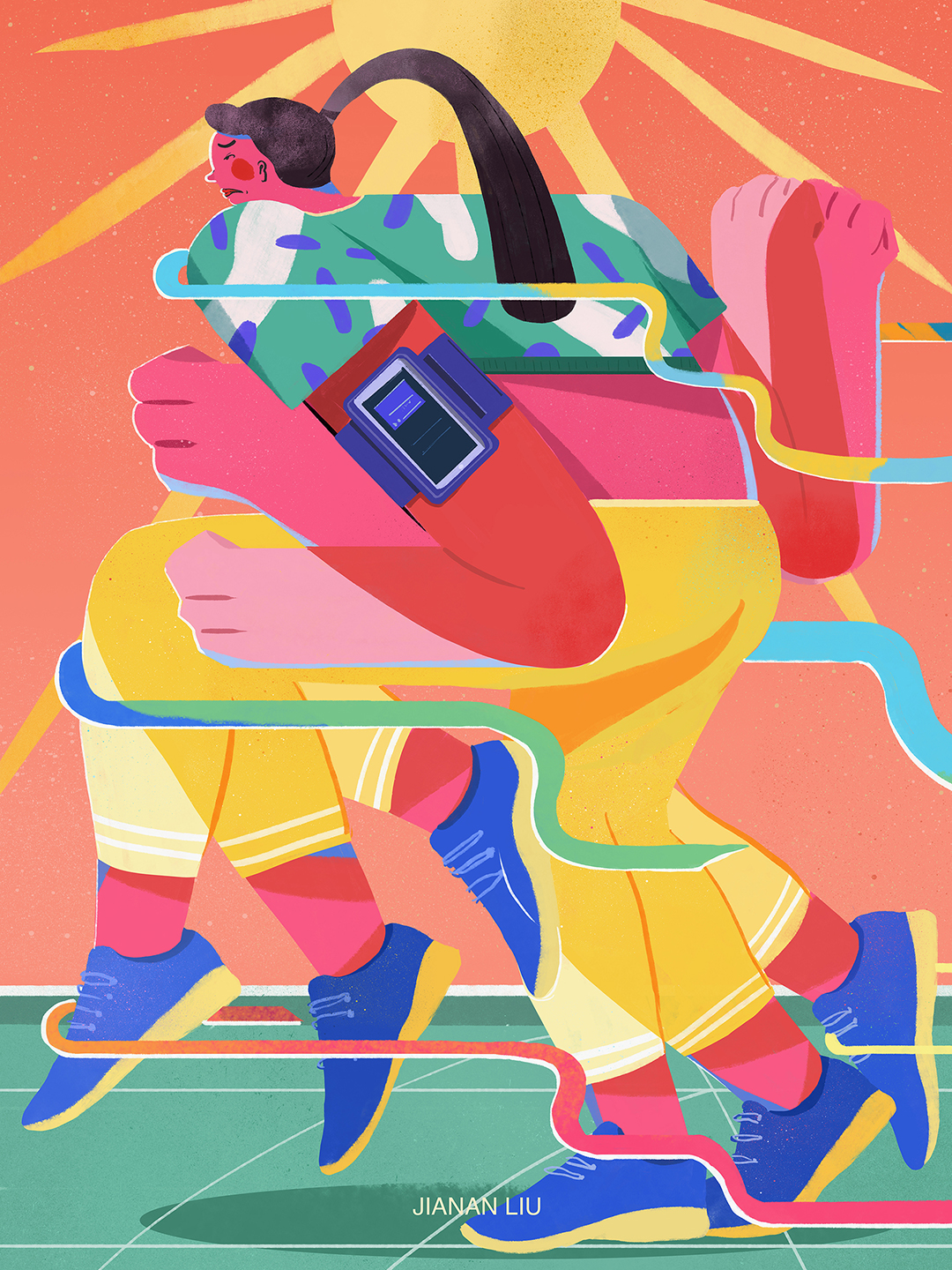 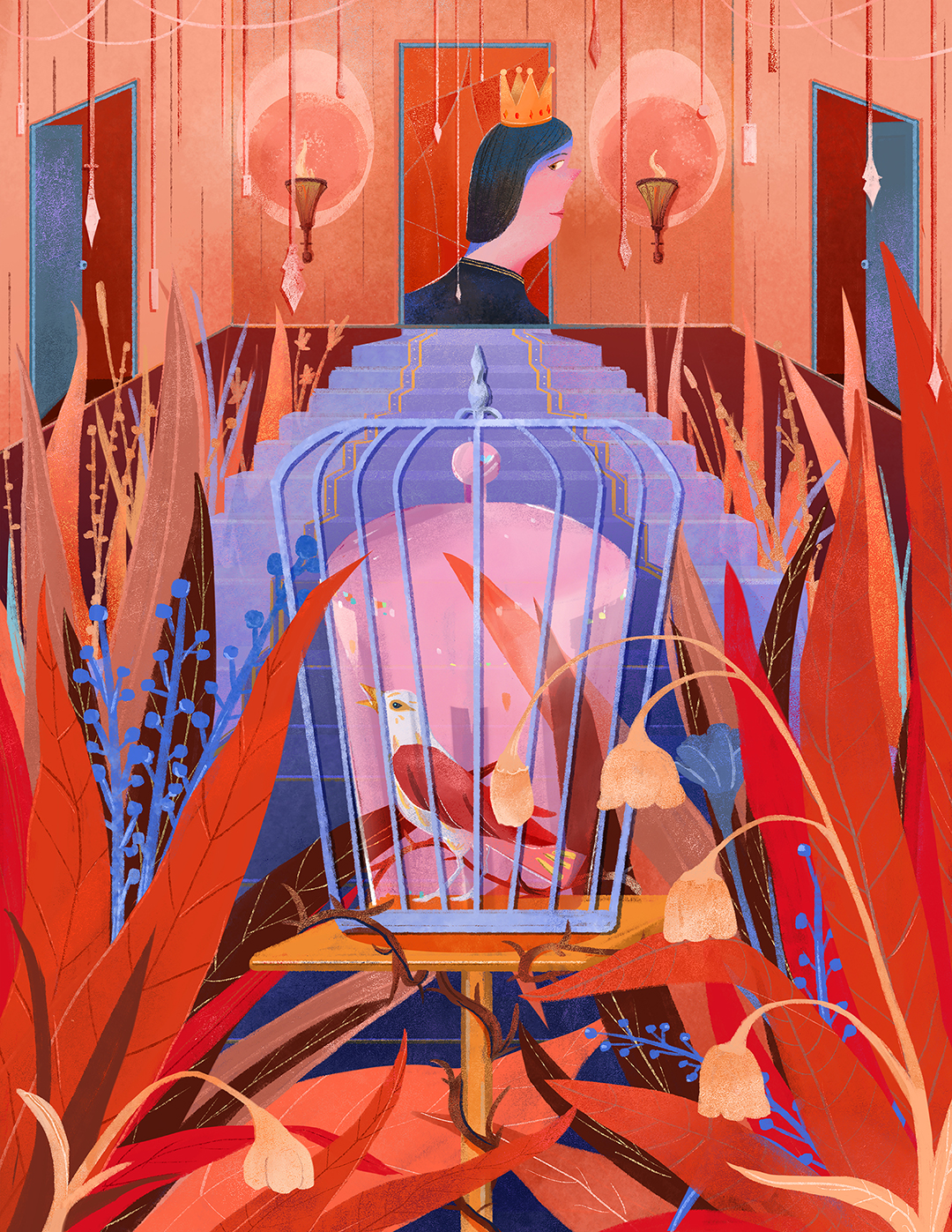 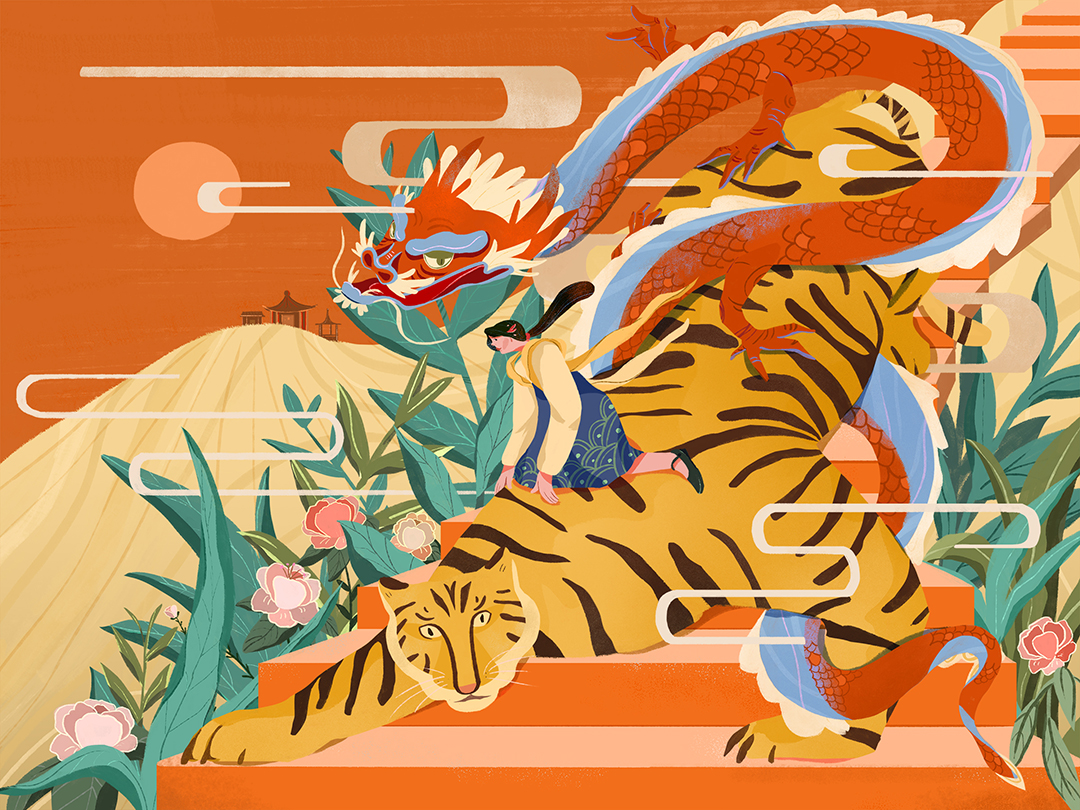 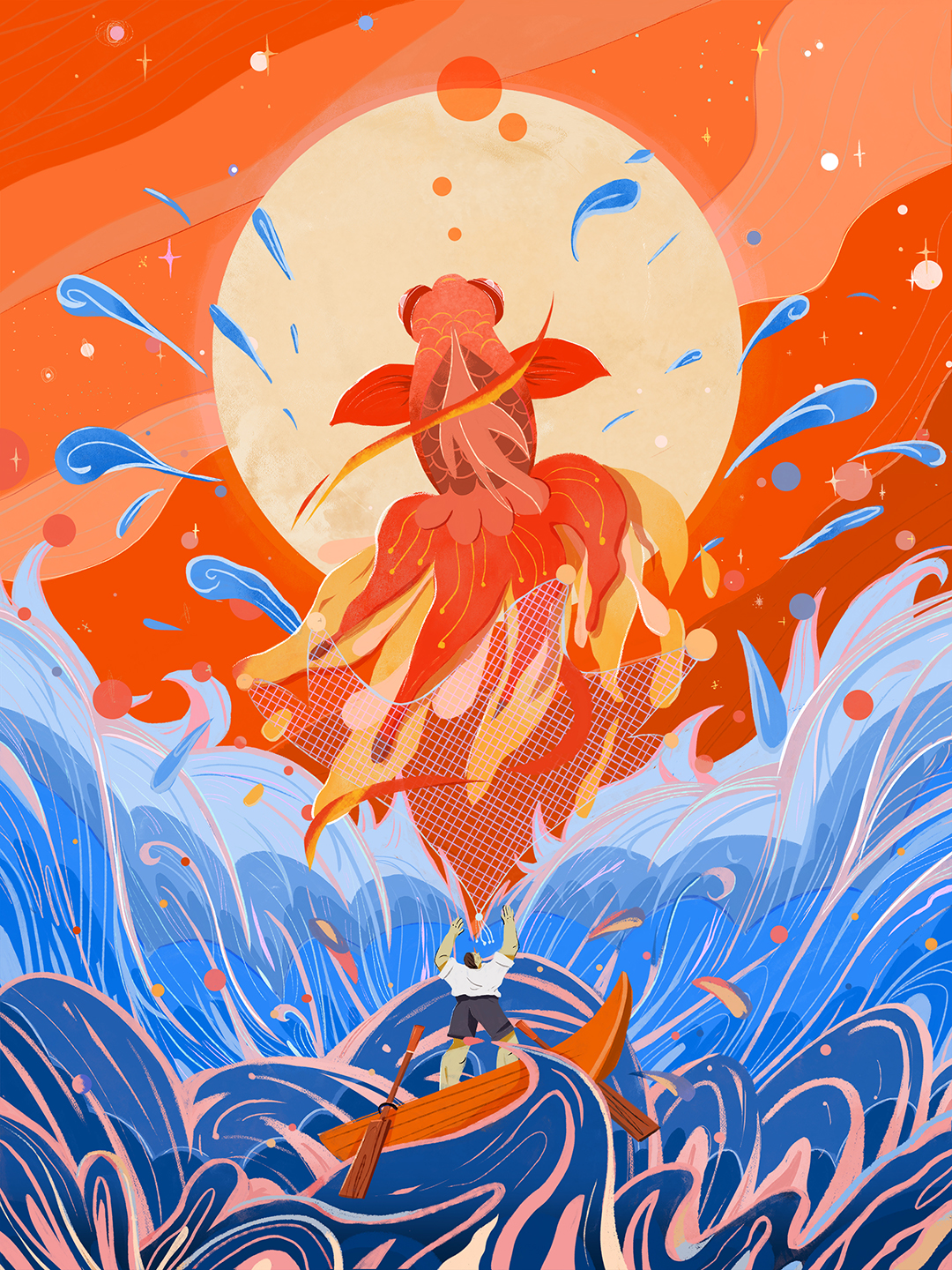 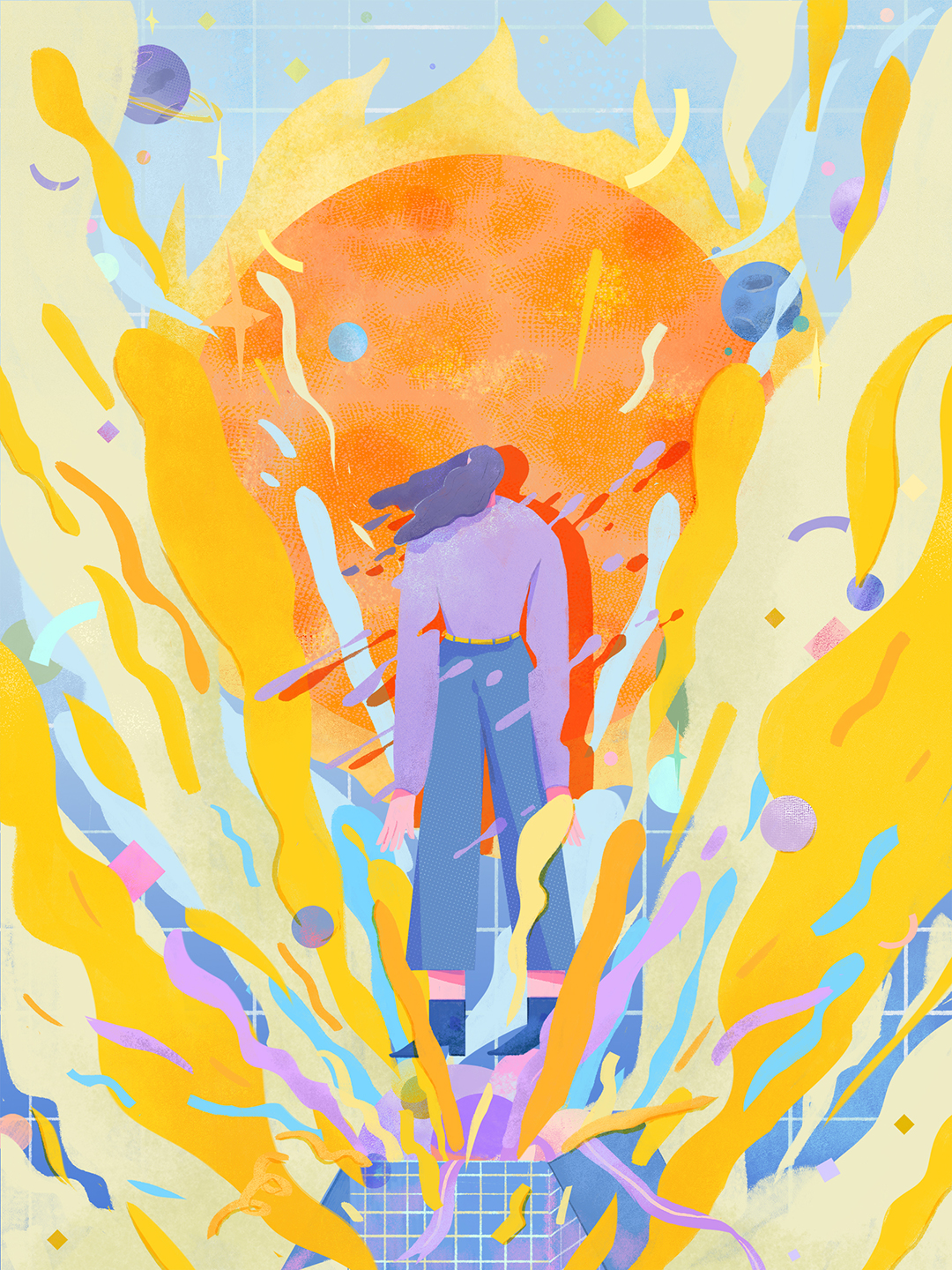 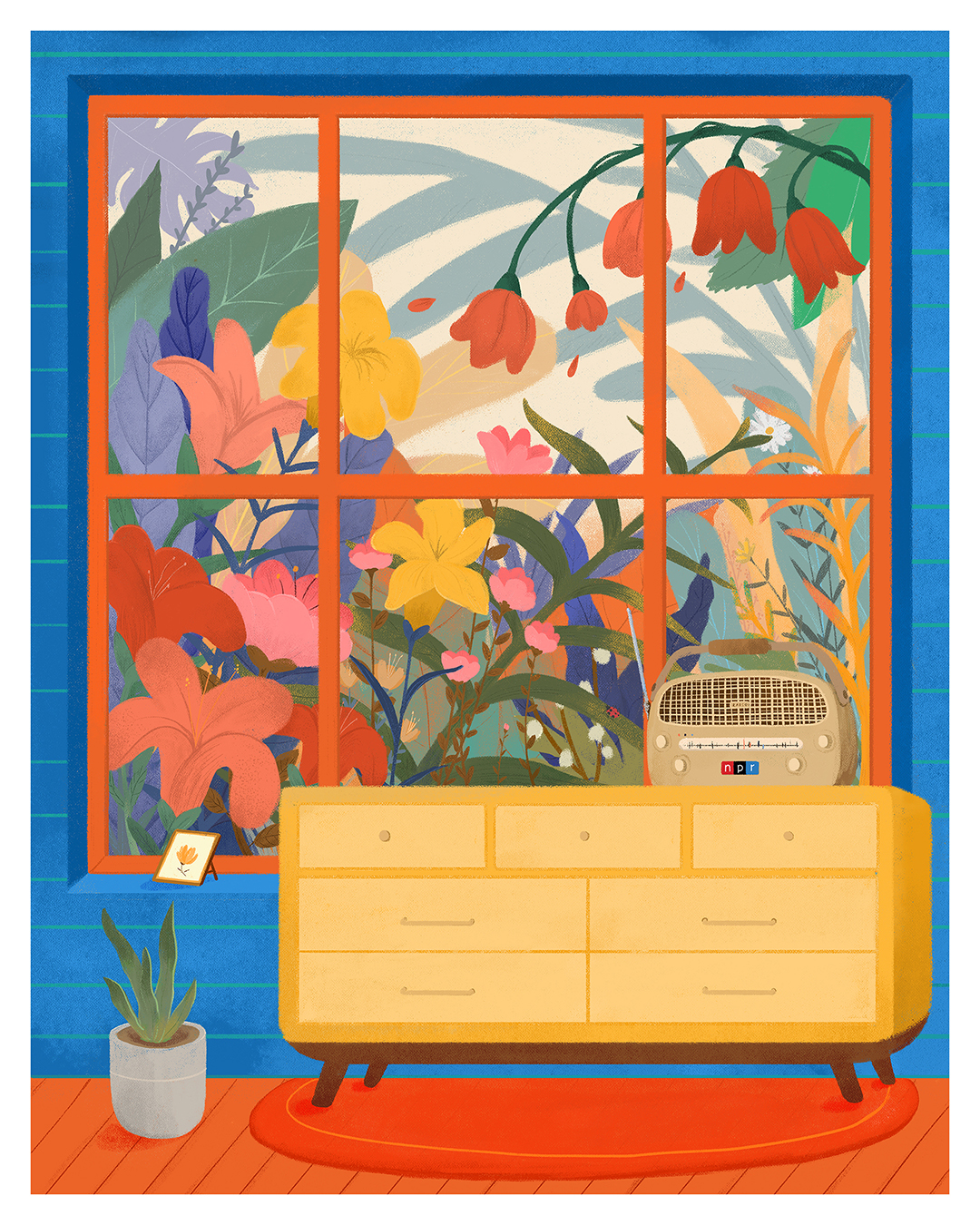 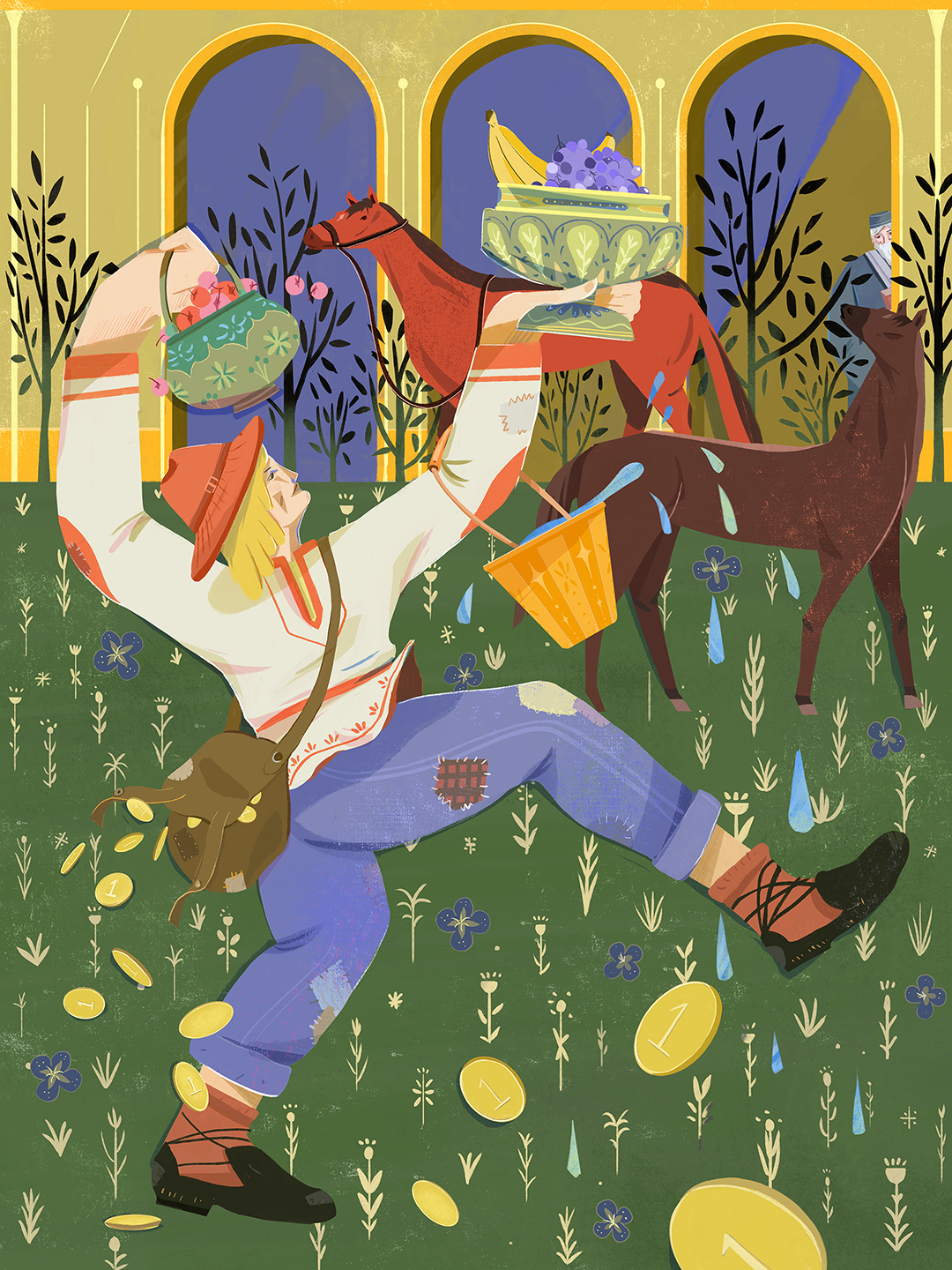 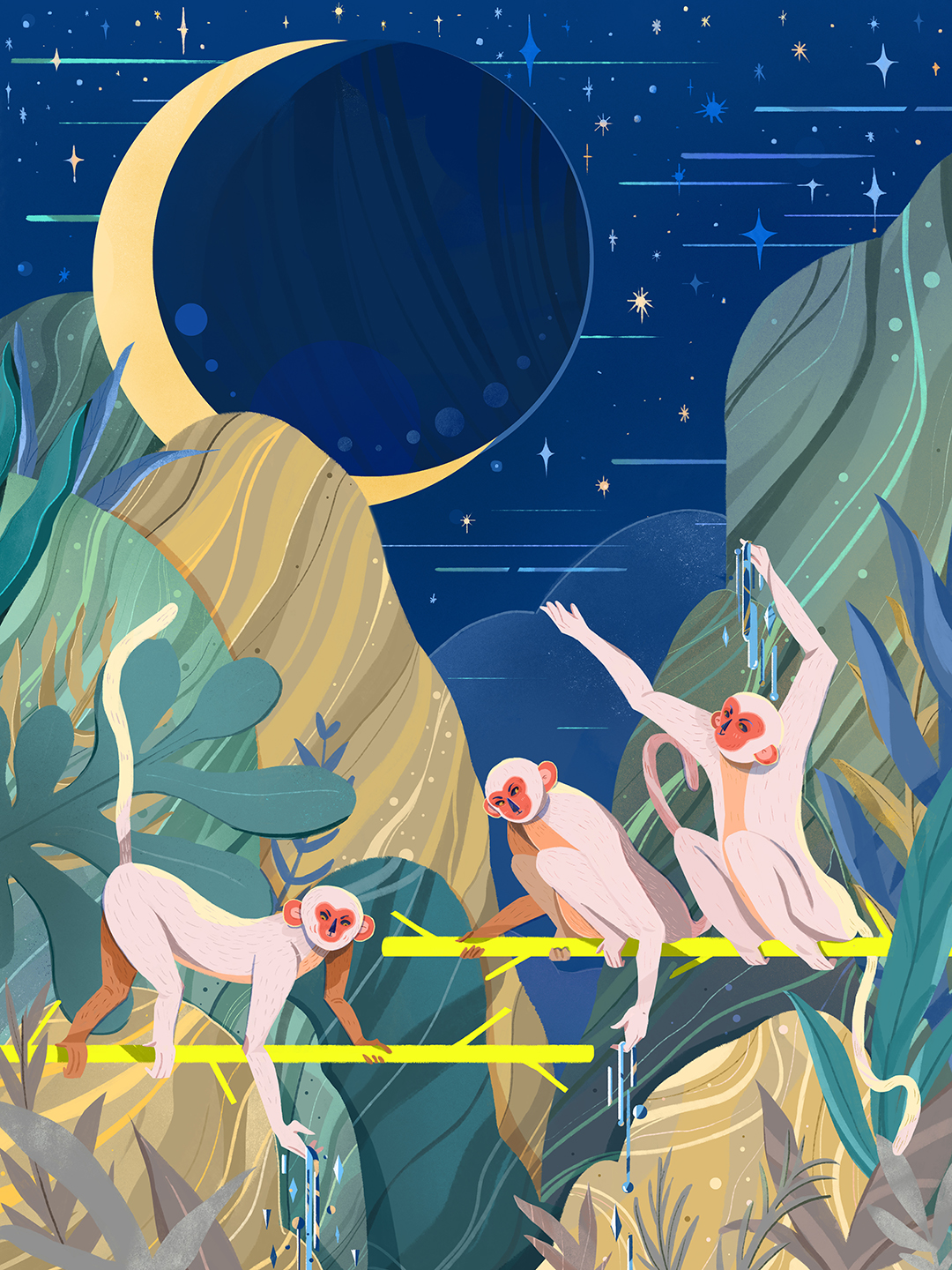 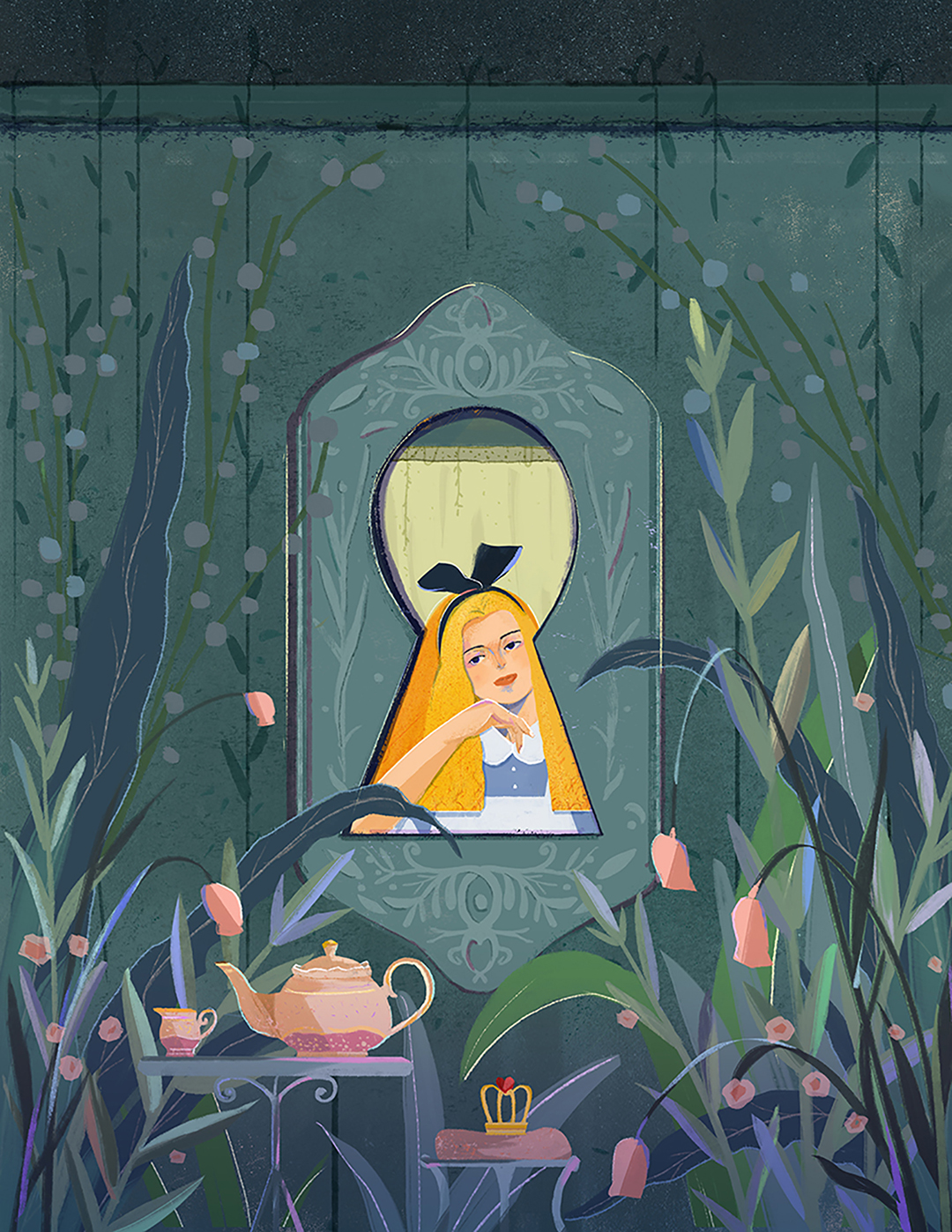 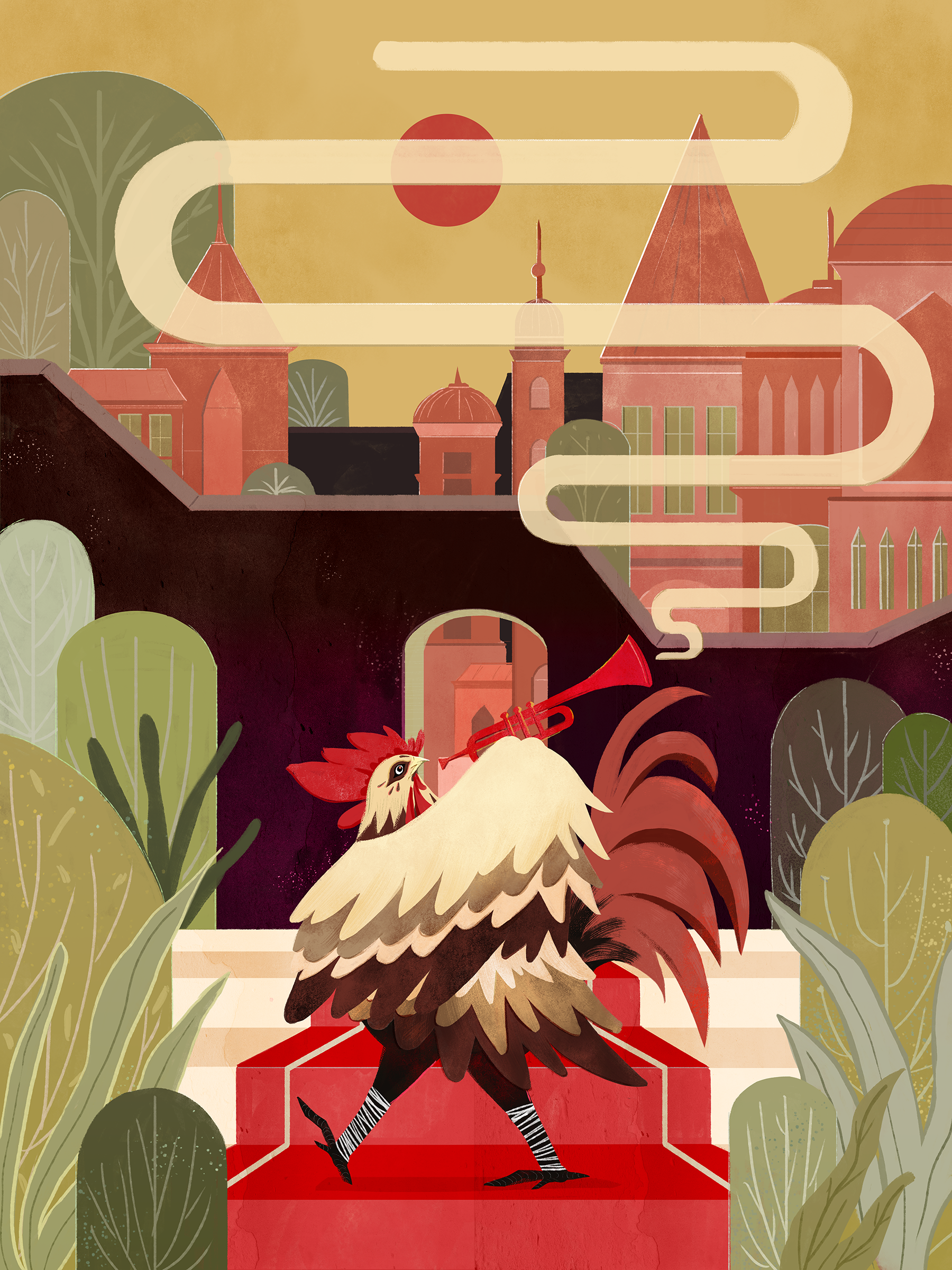 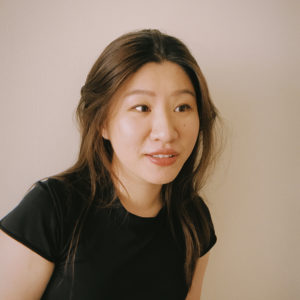 I was born and raised in Beijing, China. I grew up with lots of comics and manga and watched cartoon shows every day after school. I always wanted to create something by myself as well. I found my passion in illustration through my day time job. I worked for an IT company and was in charge of doing promotional materials for websites/apps. I did several small illustrations and found it was fun and I actually felt really good.

Thanks to the internet, I was able to see so many amazing illustrators around the world which really encouraged and inspired me to find my own voice in illustration. A year later I quit my job, came to the U.S. to study illustration at Syracuse University and Maryland Institute College of Art (2016-2019). Right now, I’m doing freelance work based in Baltimore. I have a very cute kitty his name is Notch and he will be 5 years old soon.

I live in Baltimore right now. Baltimore is such an old city on the east coast, near DC and Virginia. Living here can not compare with NYC, Shanghai, or any major city, but it has a modern city vibe and is also very chill. After spending so many years in Beijing, it is a new experience for me living in a small city. I really like Baltimore even though it is considered one of the most dangerous cities in the states.

Thanks to the internet, I was able to see so many amazing illustrators around the world which really encouraged and inspired me to find my own voice in illustration.

I’d say the best thing is the location of the city, 45 mins away from DC and three and a half hours away from NYC but with a much cheaper cost of living. It is easy to enjoy museums, exhibitions and other things around the area. A reasonable rent also makes my life less stressful!

The worst thing is the high rate of crime. Some neighborhoods are clean and nice but maybe just one block later you won’t recognize where you are.

Being a freelancer isn’t easy in any way.

During my school years, I started to work with unpaid/ volunteer jobs and tried to build my relationships. I also did many projects for my former company during summer and winter breaks. Before I graduated, I put some of my work together and built a portfolio. I‘m so grateful that I have friends and mentors around me to give me valuable suggestions and ideas about my career. Luck sometimes also plays a role. I felt pretty lucky that I was able to get several paid assignments right after I finished school. This really helped me to believe in myself and build my confidence.

Luck sometimes also plays a role. I felt pretty lucky that I was able to get several paid assignments right after I finished school. This really helped me to believe in myself and build my confidence.

Yes! My parents support me with no conditions, even though they don’t really understand what I do for work. I’m so fortunate to have such a supportive and open-mind family! Another person I can’t appreciate enough is my boyfriend. He always stands with me and encourages me to chase my dreams. I appreciate everyone around me!

I love challenging myself. I want to try something new, such as new subject matters, materials, etc. I don’t want to stay in a comfort zone for too long. Changing really makes me want to create more work! One day, I’d like to have my own creative studio/ brand to reach out to a broader audience.

I don’t want to stay in a comfort zone for too long. Changing really makes me want to create more work!

I don’t know if the person I looked up to is considered local, but she did live in Beijing for a while. At that time, I was super into her comic. I brought that magazine every month and got really excited about her work! I dreamed one day that I’d be able to see my work in the same magazine!

For me personally, I haven’t experienced any challenges because of my gender, but I have heard stories related to it. Today, we have groups and communities to specifically help and support female creatives, which is a big step for all of us. I think we have already made some progress but there is definitely a long way to go for gender equality in our industry.

Your age is just a number it doesn’t represent you and it never will.

Work hard and never give up because other people say so. Your age is just a number it doesn’t represent you and it never will.