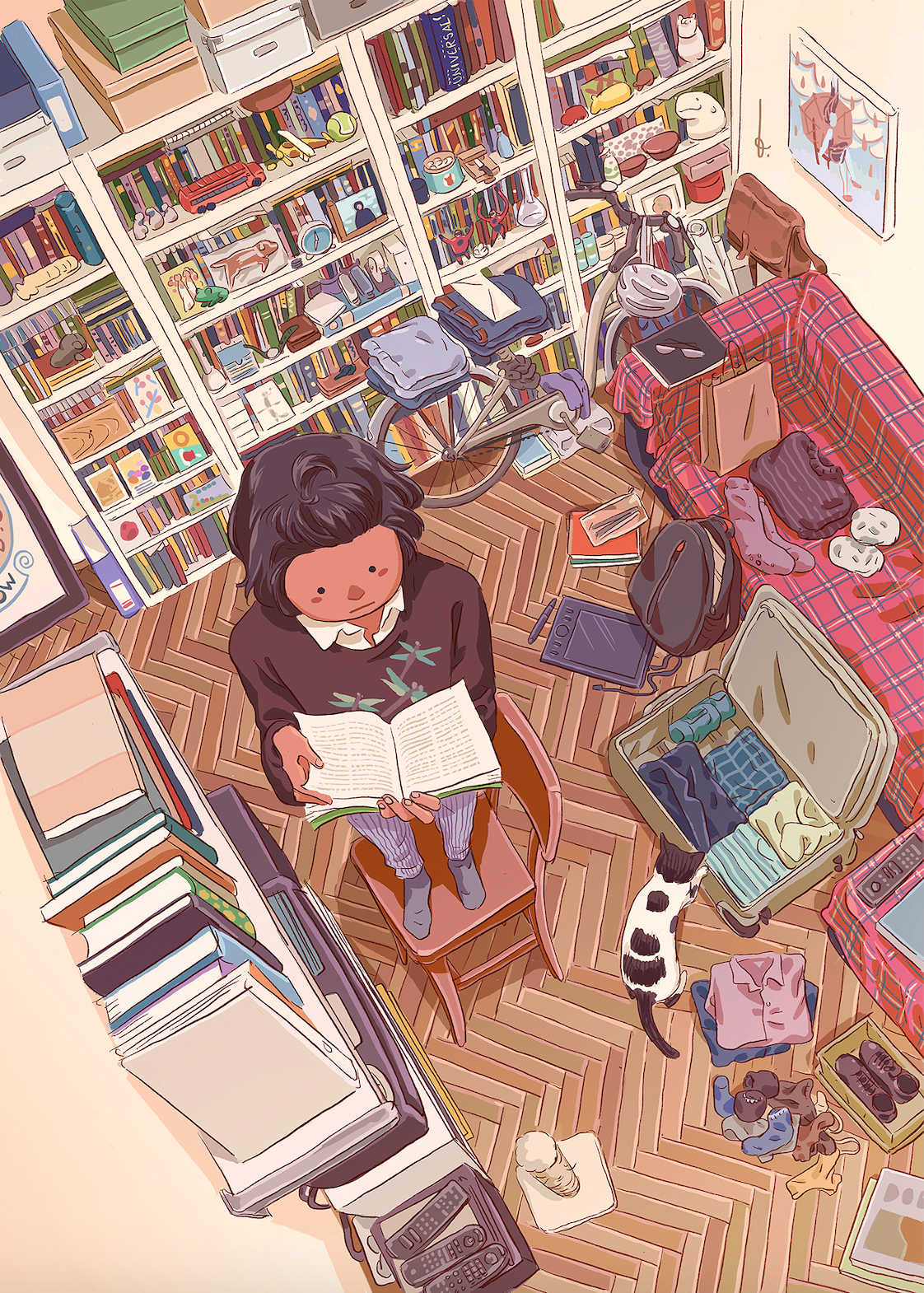 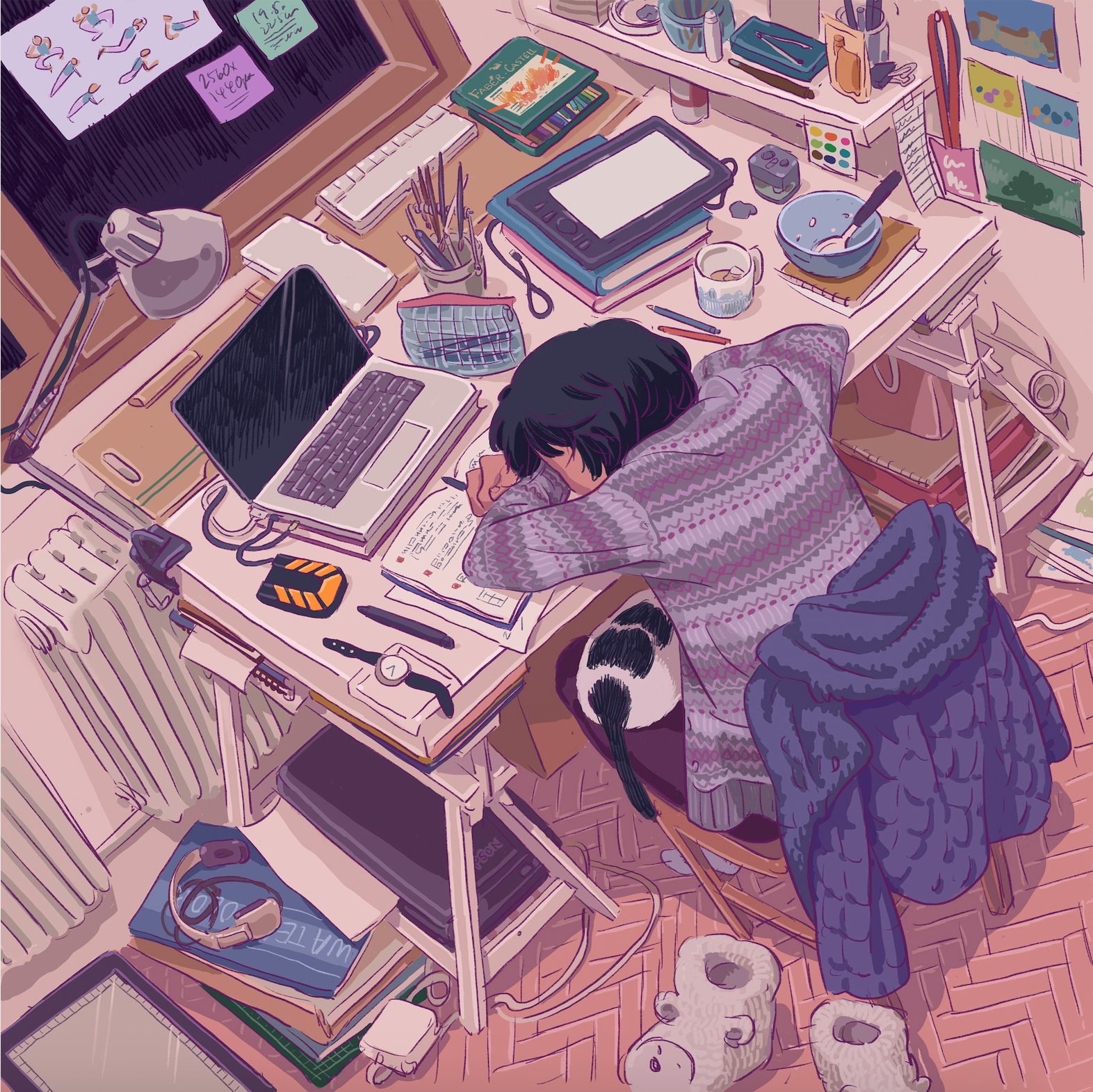 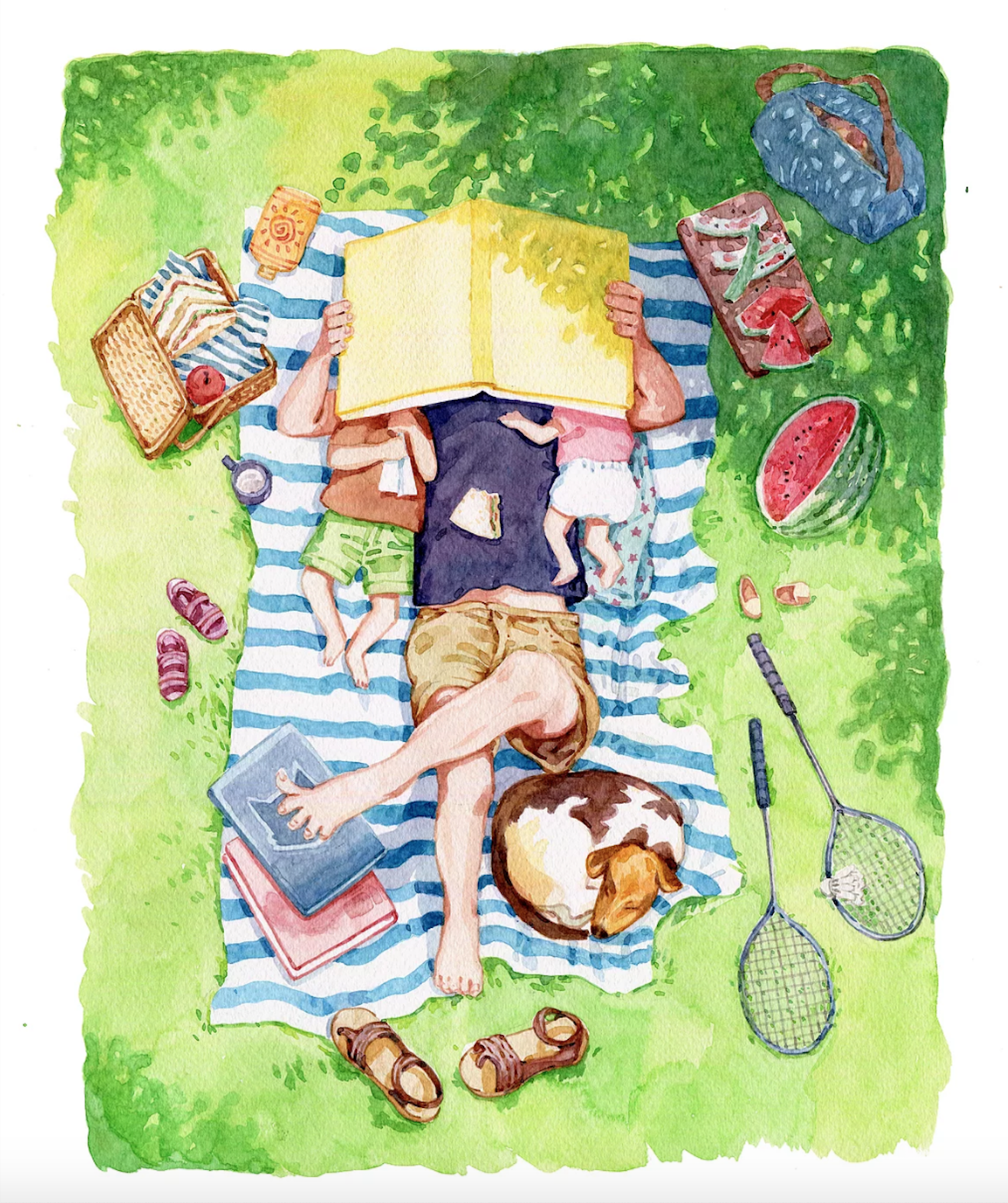 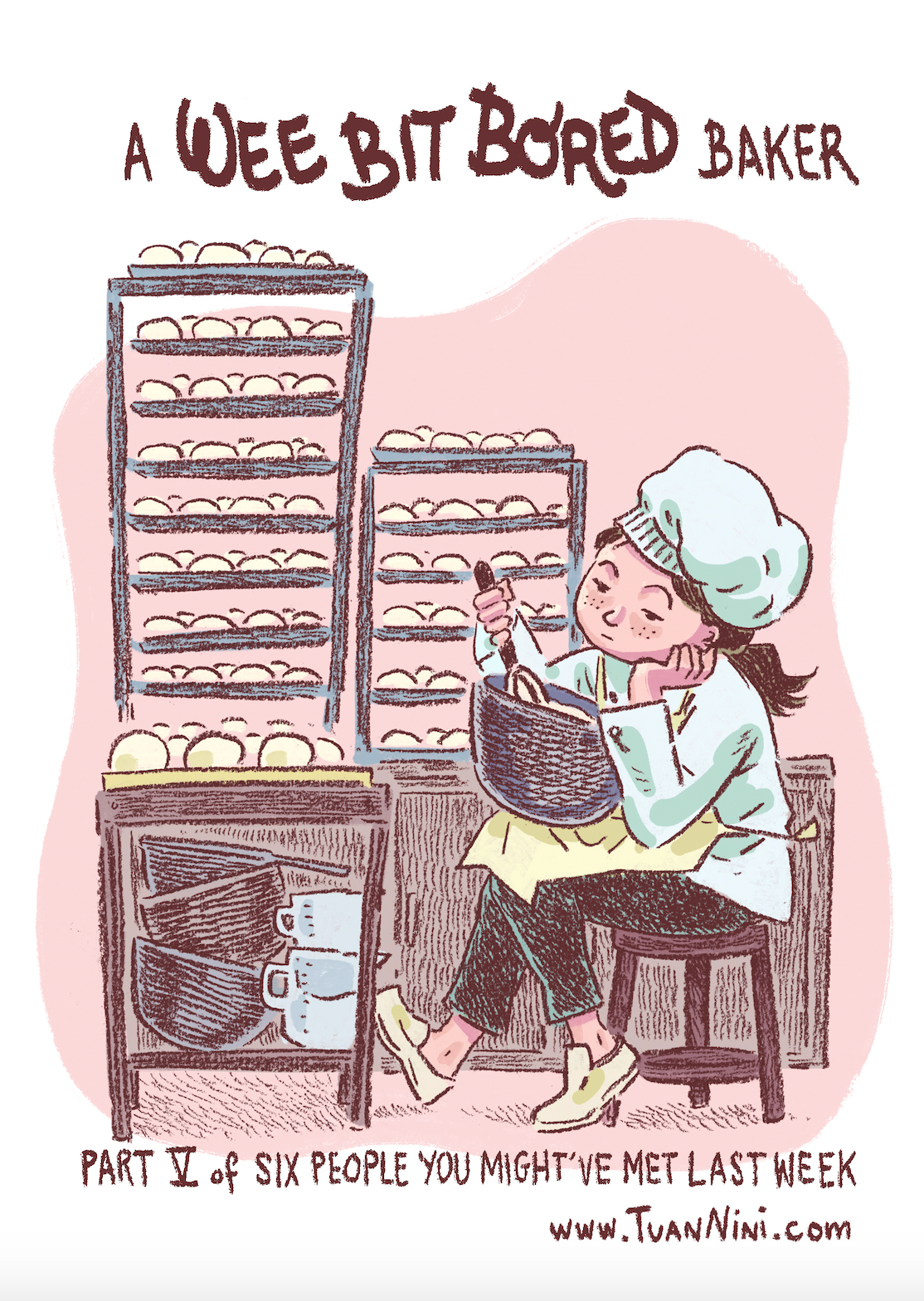 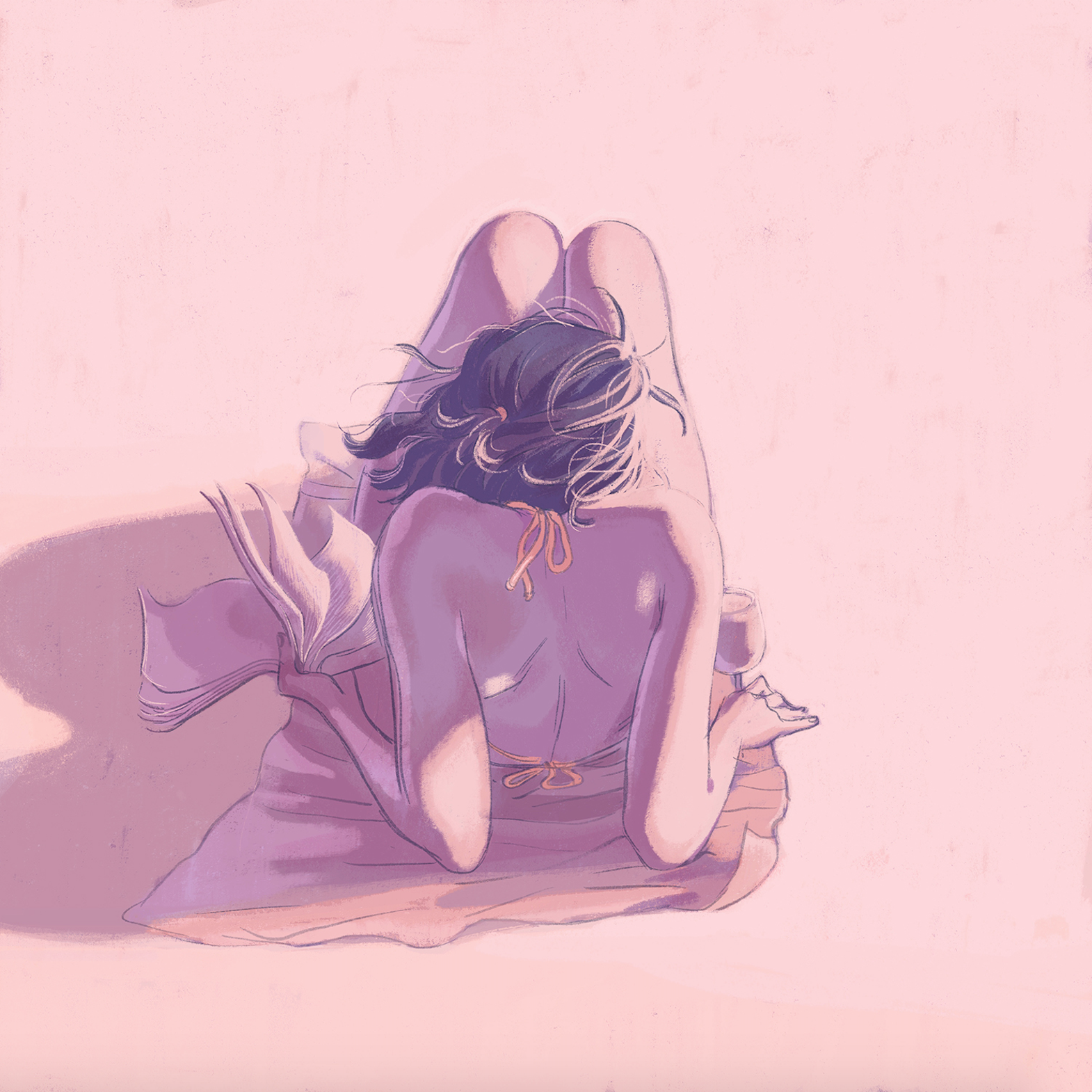 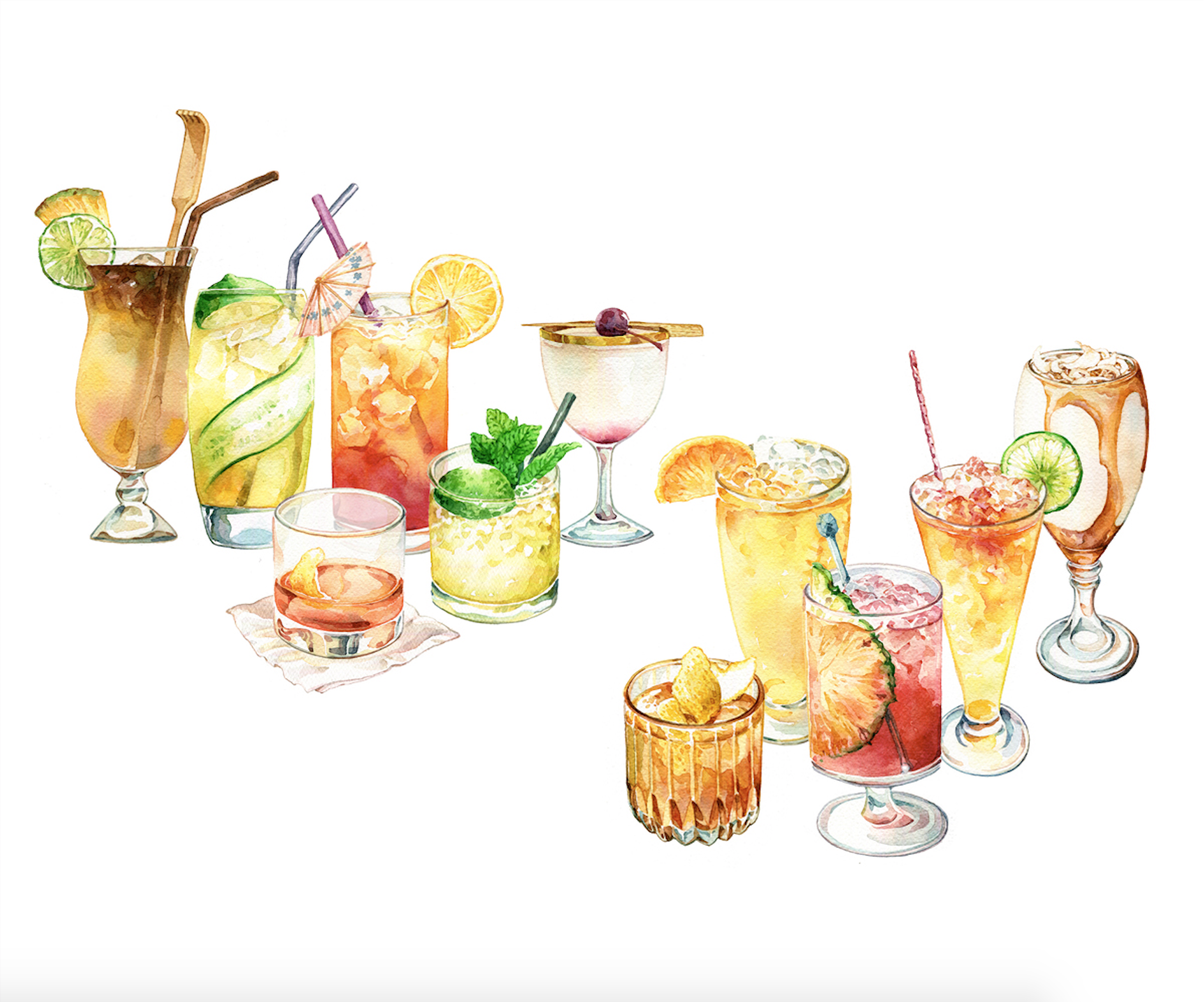 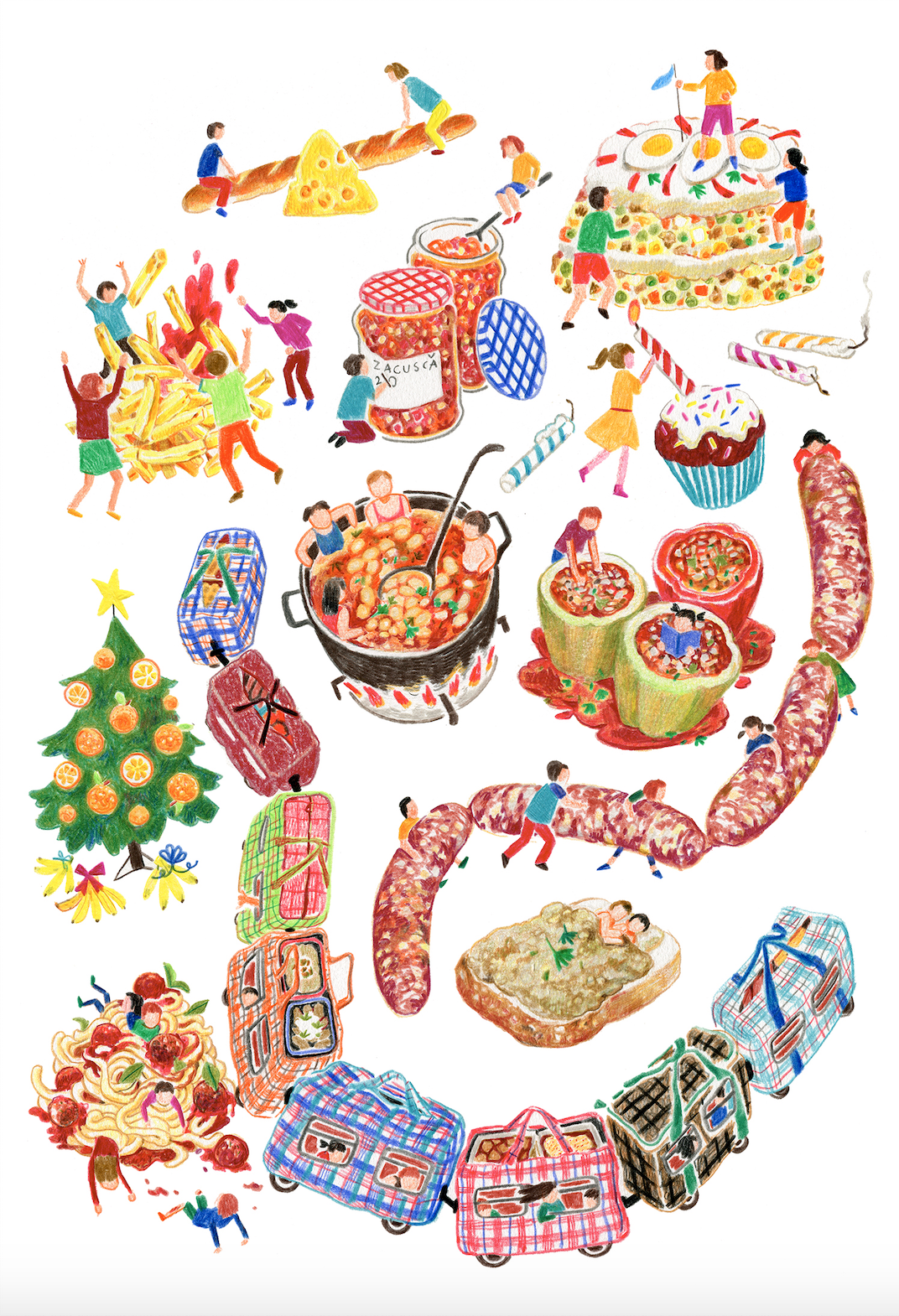 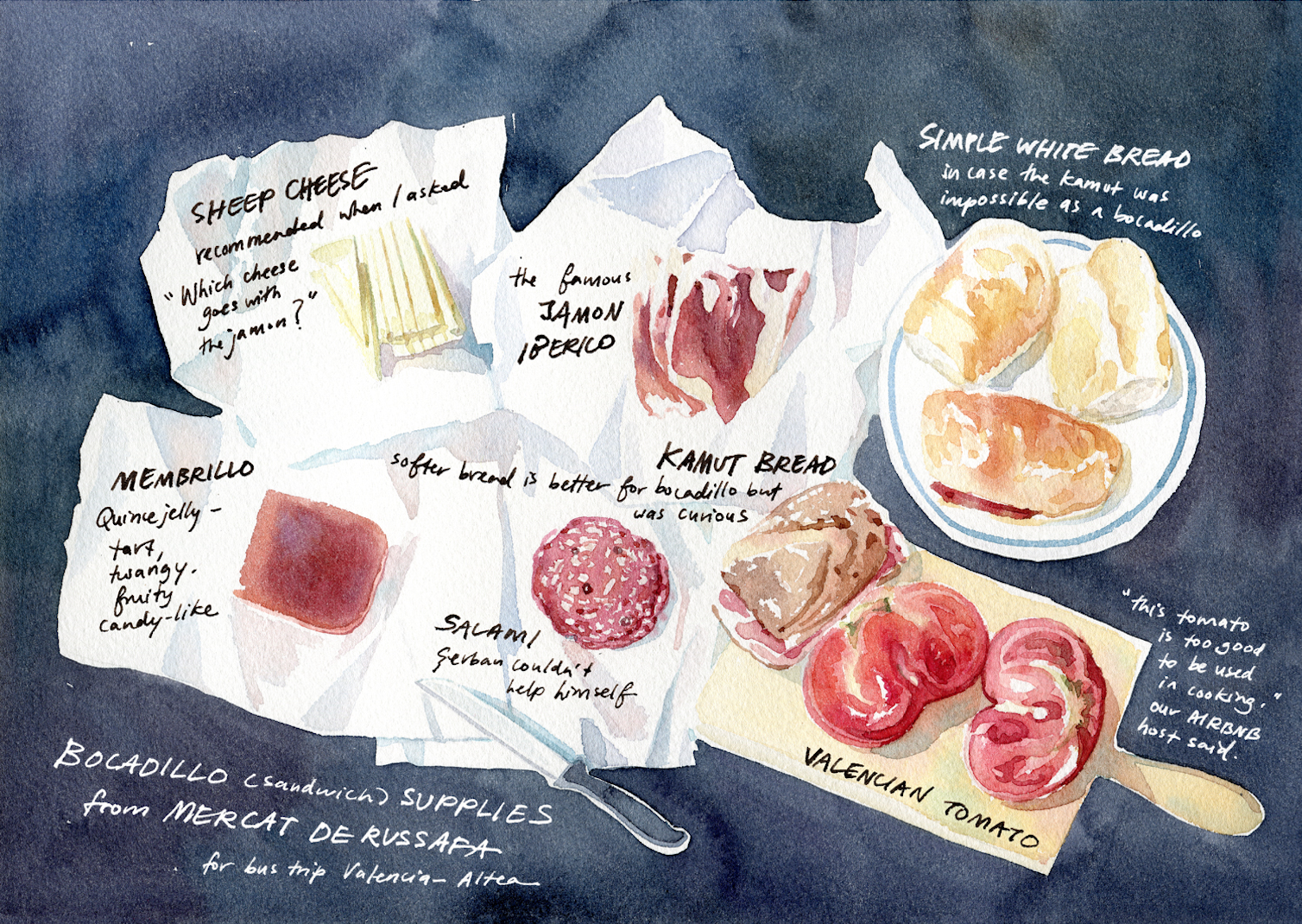 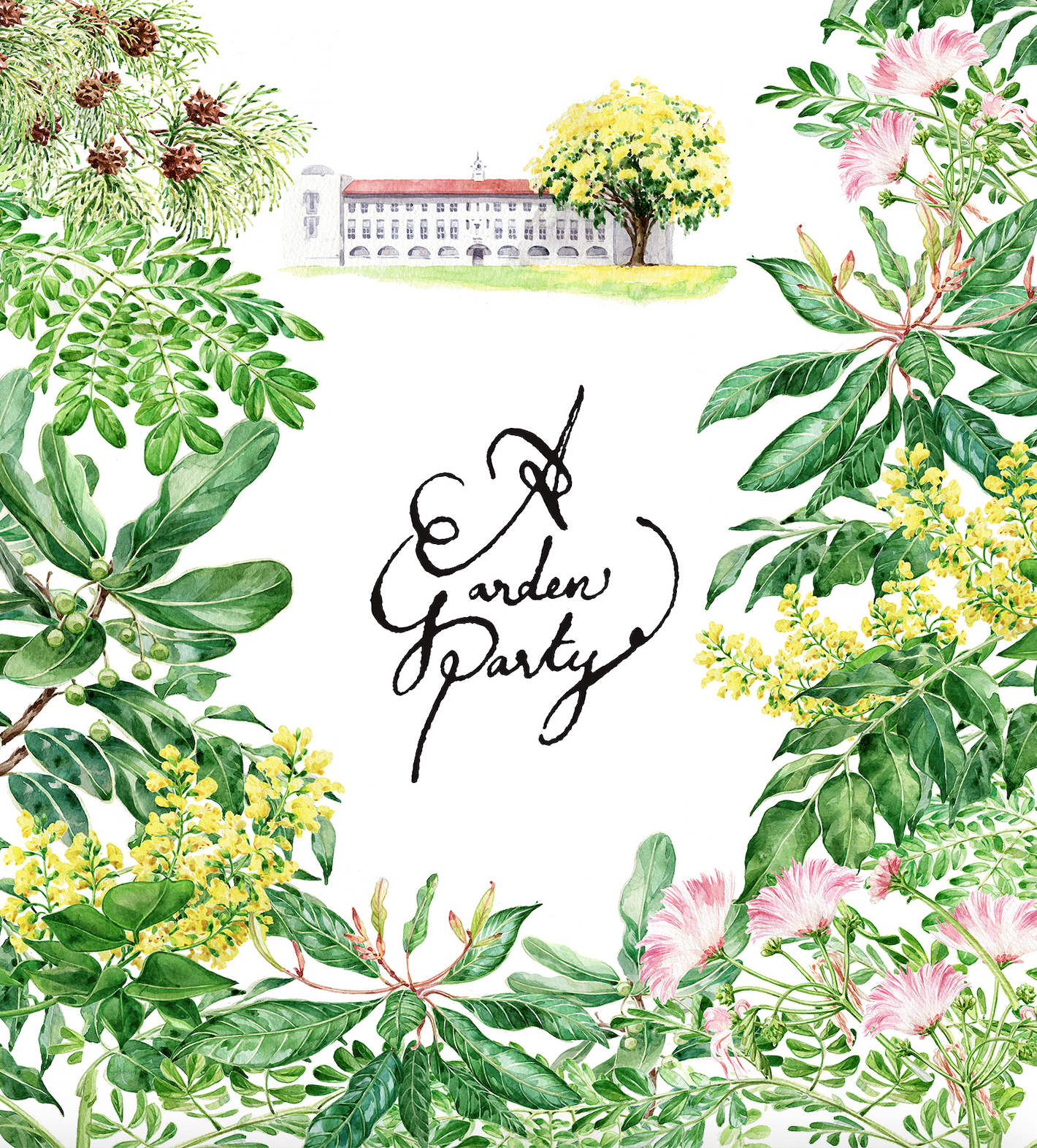 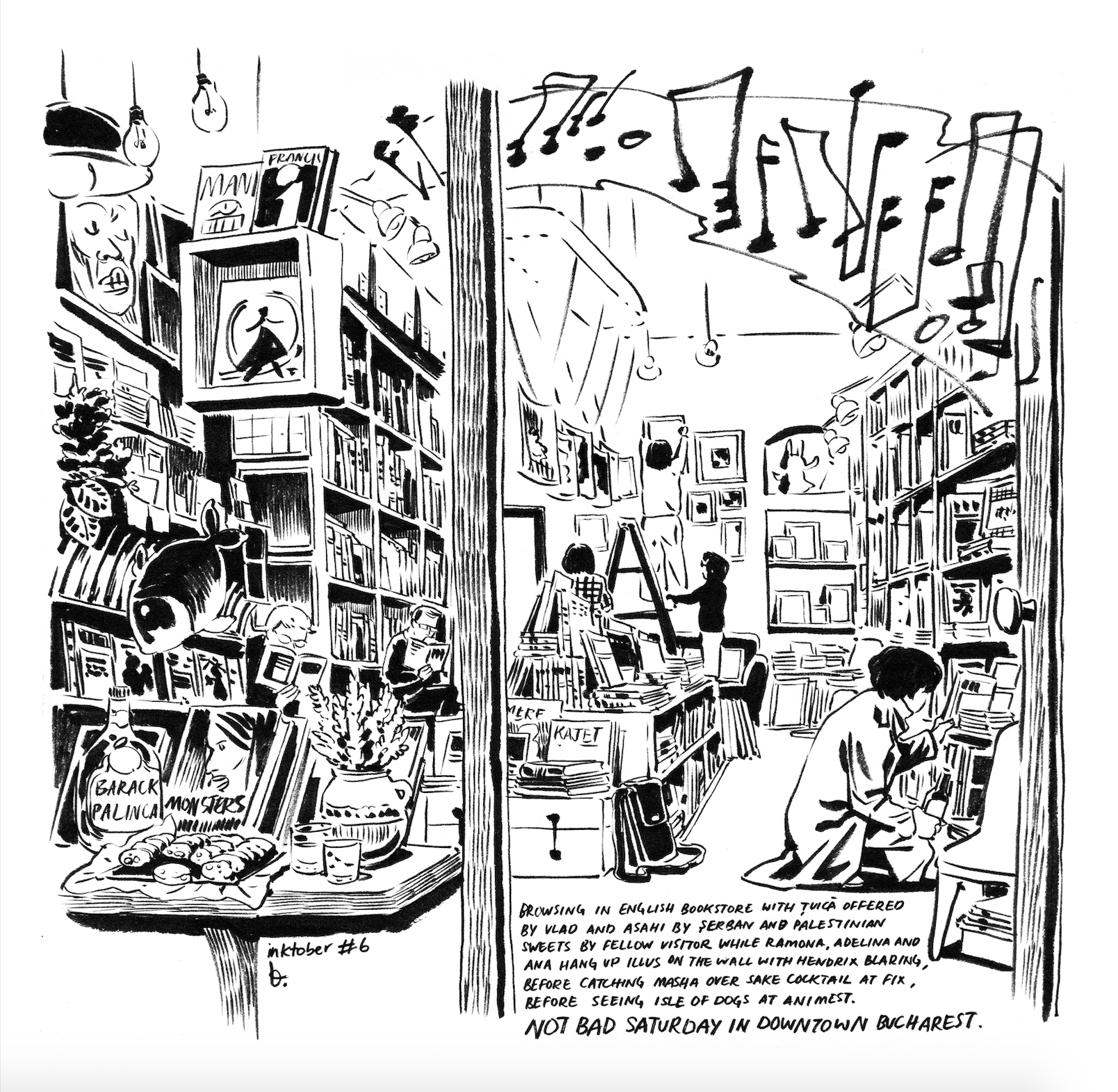 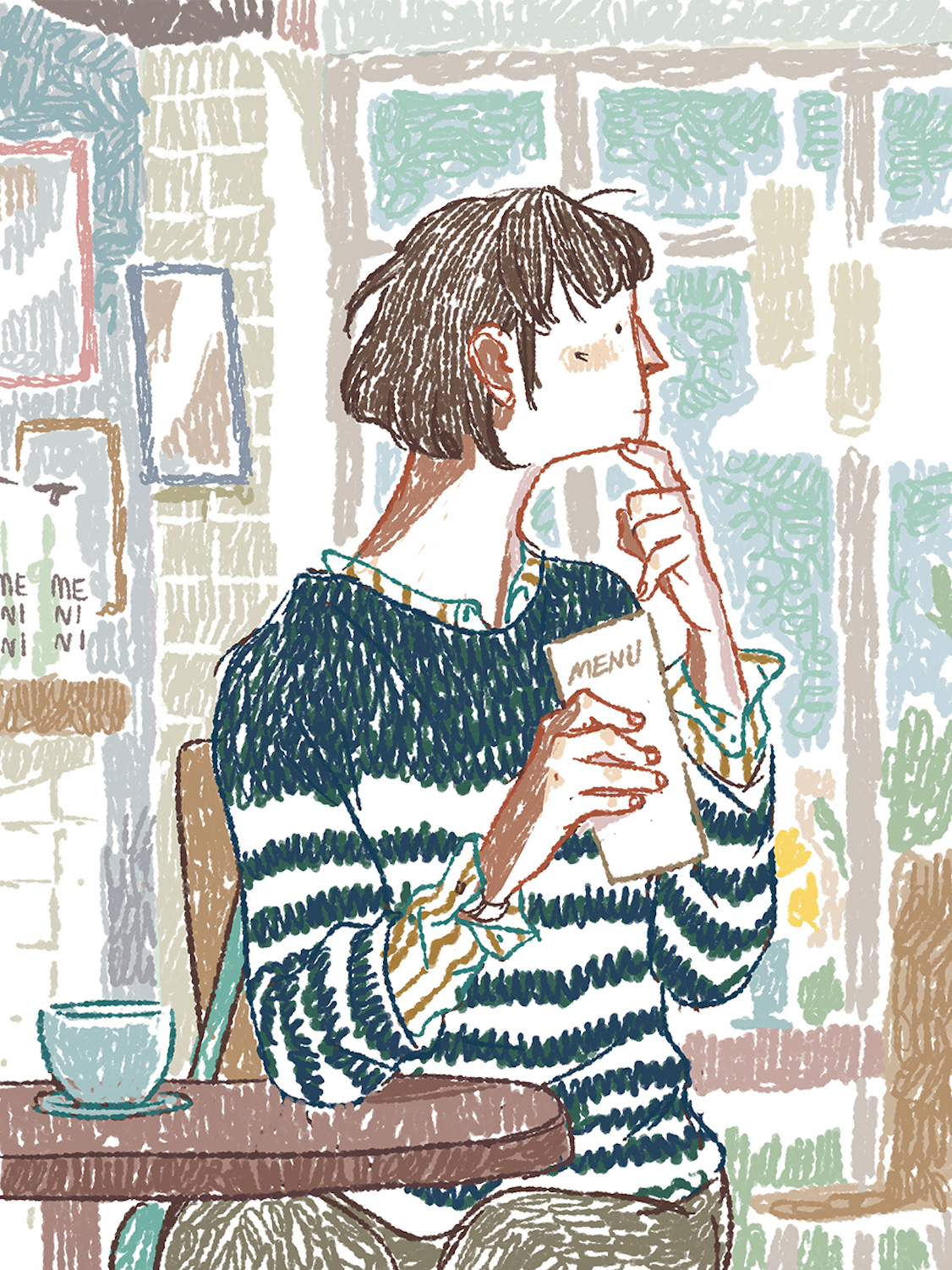 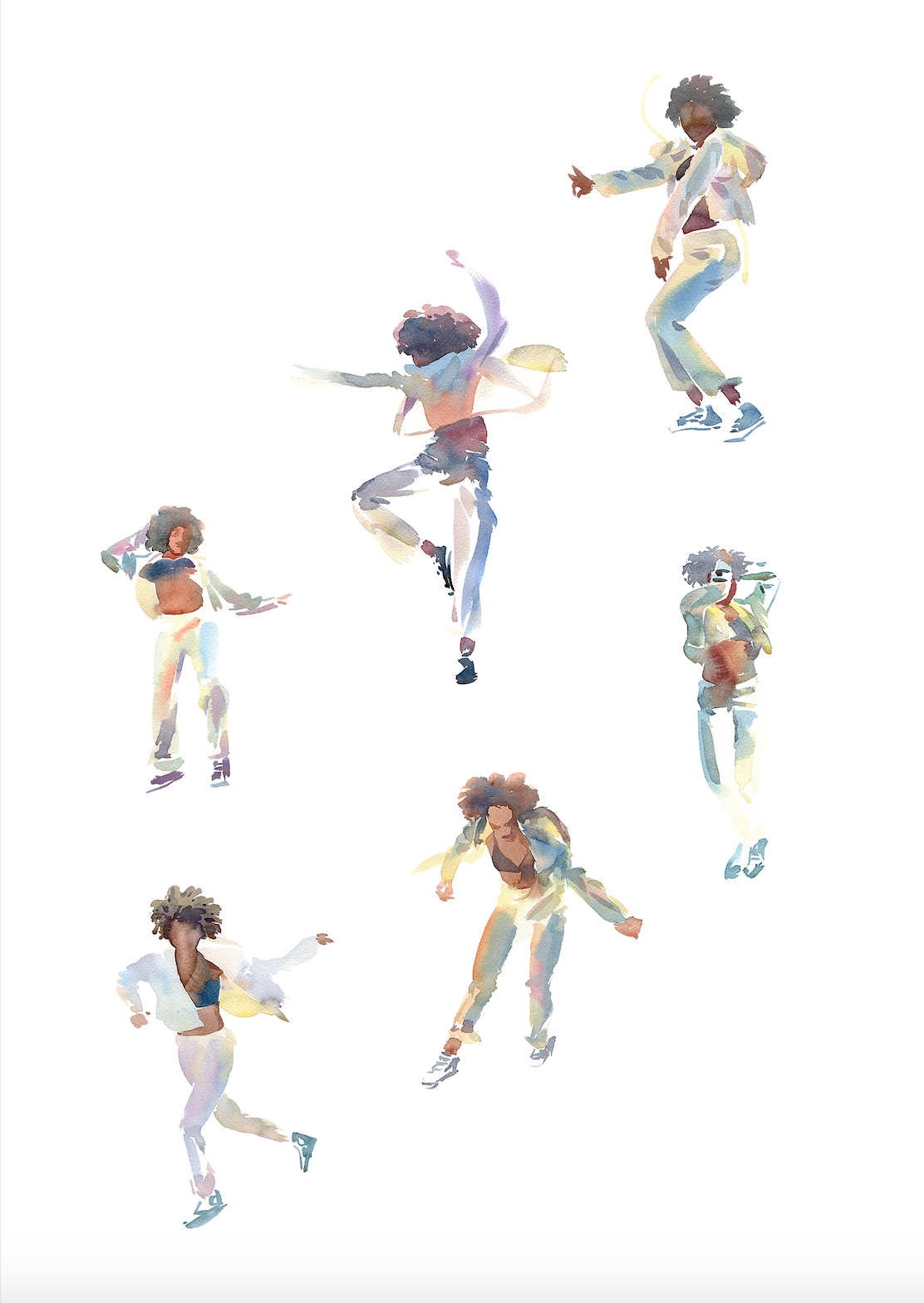 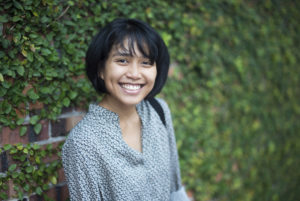 I am from Kuala Lumpur, I left to Bucharest in 2006 to study painting and I’ve mostly lived here ever since. I started working as a freelance illustrator almost immediately after graduating. I speak Malay, English, Romanian and am currently studying Japanese. In my spare time, I love reading about languages and food, and it’s been a bit of break but I enjoy contact improvisation and contemporary dance.

The first thing you need to know about Bucharest is that until 30 years ago Romania was a communist country, hence as a city, in a capitalistic sense, Bucharest is a relatively new settlement- as such, ways of working is being agreed upon on everyday- which can be tiring and liberating at the same time. On the other hand, there are many more creative related events and workshops today than there was 10 years ago, just last week I spent the week painting a 5 storey mural with Portuguese artist Akacorleone who was invited under an illustration workshop Visual Playground that grows bigger and bigger each year (Among the invited teachers this year was Emiliano Ponzi, Studio Muti, and Magoz; the previous edition; Malika Favre and Yukai Du were among them); there is a tangible buzz in Bucharest these days, and everyone is being inspired by each other. As a city Bucharest is a place of dizzying contradictions; very lush; green parks against a backdrop of monotone grey communist blocks; eclectic interbelic architecture peppered around unassuming back streets; the large gap between the rich and the poor; though I feel that there is a growing middle class.

There is a tangible buzz in Bucharest these days, and everyone is being inspired by each other.

In my own personal context, the best thing is that people are very open and inclusive to foreigners, people are quite eager to assimilate within the community, and this is a feeling I get across all the demographics I’ve encountered- young and old, higher or lower in income status. The worst thing would be corruption in both public and private sectors, it trickles down (and/or up?) into the national psyche of people having a tough time trusting one another.

Give us 3 words that describe what it’s like to be creative in your city.

I grew up drawing a lot and I knew for sure I wanted to draw for a living, though an illustrator as a job was never obvious to me even after high school. Thinking one could only either go into fine arts (meaning into the gallery world) or work in animation studios, I chose fine arts. It was only after graduating I was told by someone that I could try work as an illustrator, which means the work I make is not limited to a certain “space” but can be useful in anything that required visualization, and after attending many dull vernisages from the “art world”, the idea of being concretely useful was much more attractive to me.

I grew up drawing a lot and I knew for sure I wanted to draw for a living, though an illustrator as a job was never obvious to me even after high school.

My parents initially tried to sway me into other more money-making things “you like to draw? architecture’s for you!” but I was pretty hard-headed so they gave in eventually. They supported me in the way that they could, which was financially for my studies. I am very lucky that my siblings are also supportive emotionally.

After almost a decade of giving my all into client work, my goal is to rediscover making art for art’s sake, and hope that it would still be “useful” in some other way, even if indirectly. I still feel raison d’être is important in everything that I make, but my own definition of this has expanded.
I used to stress over not having “one style of my own”, but now I have decided that the fact that I enjoy very much working in many different visual languages is what makes me ME, so I am happy to unapologetically explore this further and see where this takes me.

I used to stress over not having “one style of my own”, but now I have decided that the fact that I enjoy very much working in many different visual languages is what makes me ME

It is tempting to answer this question with artists I completely adore, but precisely because of being starstruck I don’t see what I could bring to the table… So I will answer with the people I would love to work with on a writing capacity- I am very much interested in illustrating for people who shed light on food that might be forgotten yet important, or suggesting different ways to think about food and agriculture- Dan Barber being an important example.

Strong-willed and motivated to improve every day- or at least I try to surround myself with people with these traits, women or not. Incidentally, the illustration and design event I mentioned earlier “Visual Playground” is organized by an all-female group, all of whom work full time as illustrators and/or designers themselves.

This may come off as sounding a little arrogant but I never quite cared about the person, I only looked for the work that I like- also, growing up I was more interested in the comics art, and the works that I liked very much happened to be made by males. Otherwise, I spent a lot more attention to international artists, who at the time, also happened to be mostly men. I’m happy to say that in the meantime this has changed, there are many more female artists whose work I look up to, who also incidentally happen to be Asian, like Jillian Tamaki, Peihsiu Chen, and Lee Kyutae.

I tend not to assume that the challenges that I face are related to my gender- either it is not a problem in Bucharest or it’s not a topic in my mind- I don’t see myself as a “female illustrator”. Also in the case of Bucharest, female illustrators outnumber male illustrators by a lot, and I would say professional acknowledgment is not affected by gender here. On the other hand, it is mysterious how, in the slightly older age group, I know many more fathers who work as creatives than mothers, so maybe females and males are at a level playing field only until they decide to be a parent. But I don’t have concrete evidence to this; my point of view is one of a female without children, and illustration as an active commercial domain is relatively new in Romania. As there are many young female illustrators today it will be interesting to look at the scene in 10 years.

No woman nor man is an island, you are much more likely to have confidence when you are part of a community where everyone inspires each other (and confidence much more often leads to better work).

I don’t know how to give advice without knowing the context or particular struggles of a person, so at the risk of making the unfair assumption that young women might be more likely to feel insecure about their work: Be supportive of each other (other artists, and other people around you). No woman nor man is an island, you are much more likely to have confidence when you are part of a community where everyone inspires each other (and confidence much more often leads to better work). It is also easy to be tempted to copy trends, and it is often hard to tell if an image is an inspiration or is a crutch- the best way is to diversify your influences as broadly as possible, not just in art but anything in life. Also, don’t have a victim mentality- don’t blame others or the situation, just keep doing the best you can, and don’t be afraid to tell the world that you are doing this. Though I think this advice is for anyone in the creative field.