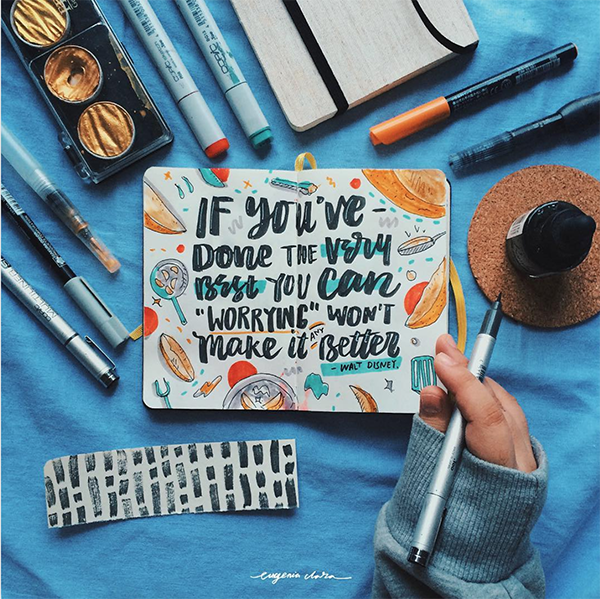 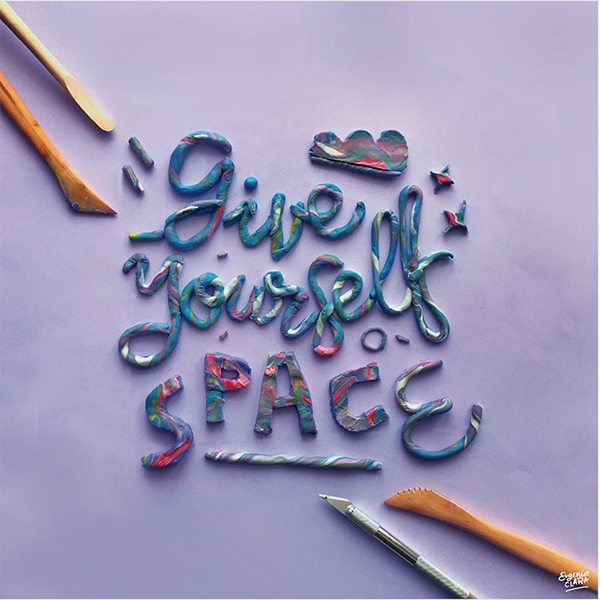 Hi, I’m Eugenia Clara— a creative, wears heart on my sleeve! On day to day I’m working as Art Director/ Creative in an advertising agency, and for the rest of the day I’m basically making creative-and-art-related projects to express and say things I wanted to say— and for that, the internet is my home since 2007 (started posted art stuff around that time).

Ahh, I was born and raised in a super tiny and quite remote town in Duri, Riau Province in Sumatra Island, Indonesia. It was… a small town. There’s not much I could do but be self-sufficient by reading books, making things, drawing things, wonder what it’s like to be on the big city and wonder if I can pursue more art-related stuff if I was somewhere else. I moved to Jakarta for university and worked in advertising for a few years— Jakarta was/is bittersweetly wholesome to me, apart for the infamous traffic, there’s this fast pace dynamic that I like. And since August 2017, I moved to Singapore to pursue, broaden, and expand my career in creativity both professionally and personally. Living in Singapore— I love it here so far! It’s a roller coaster of ups and downs but yet I root for this place. It’s equally the city and the people I met in my formative walks of life that makes it.

It’s equally the city and the people I met in my formative walks of life that makes it.

The best things about the current place I’m at (Singapore) is: Connectivity, literally and figuratively. The worst thing perhaps the high cost of living, haha.

I’ve been doing any form of art since I was a little kid, and I never stop. It could be scribbling on a wall, a screaming chant, a poem, a clip, a so-called-short-film, a song, a sculpture, anything! So it’s like my conscious-calling. I couldn’t see myself doing anything if it’s not something art-ish. Fast forward now I work as creative in advertising, while still continue making art-ish projects along the way.

I’ve been doing any form of art since I was a little kid, and I never stop.

Yes and no! My parents were quite supportive whenever I experimented with creativity as long as it didn’t interfere with my studies so much— but it’s different when I ditched my Bachelor of Engineering away and started a career in the creative industry years back. You know, my parents are Asian AF and they looked at art as a hobby and not a sustainable career choice. I mean, I understand where they are coming from. My parents and grandparents have appreciation towards arts but unfortunately to survive the life back then (lower-middle-class in the old struggling time) they had to give up on that artsy dream. Living the safe option where they can actually get money and afford for the family means putting the art dream away or just doing art as a last-layer hobby.

And I am lucky cause times are a little bit different and a little bit better. I’m blessed with a stubborn heart and clutch my motto to always go forth with what I believe in. Because whether I do something I hate or love, the chance of failure will always exist just the same; it just hurts a little less if I do what I love/believe in and fail at it— at least my conscience and my heart are not conflicted. Over time, my parents can see despite the stress and the uncertainty working as a creative, I still resiliently go forward and commit to my choice. My brother is a big supporter despite not entirely understanding what I do. And it’s a whole another wholesome feeling when my parents slowly became open to being supportive despite not understanding it entirely. I’d like to think, I’m really lucky, that way.

To be honest I’m recovering from major burn out as for now; I want to continue creating something I believe in, experiment with different mediums to make ‘it’ happen, and do lots of personal projects (when you work as a commercial creative, it’s a tough job to keep the energy a-flow). I know the internet is my second home and whatnot but I took a long break from most of my social media— rebuilding and restructuring who I am as a person behind the scenes. So you know, rebuilding Eugenia Clara version 28.0 haha!

I want to continue creating something I believe in, experiment with different mediums to make ‘it’ happen, and do lots of personal projects

There’re too many people I’d love to work with!

I’m at that point in life where I have chosen to be around women who are confident, go forth with what they believe in, acknowledge emotions as emotions, and unapologetically stand on their growth. Yeah!

I’m at that point in life where I have chosen to be around women who are confident, go forth with what they believe in, acknowledge emotions as emotions, and unapologetically stand on their growth.

When I grew up? Unfortunately not. Perhaps because I grew up in a remote small town where not much people did art or creative stuffs. Things changed when I’m older and exposed to internet, so many cool females in this whole world doing cool things! I’m happy that the current and future generation have this access, wherever they are geographically.

No and yes! In personal creative pursuit— the challenging aspect is mostly internal (like me vs the world?). But in the advertising industry where I’m at specifically— it still feels a bit like things are run by the boys’ club, and you gotta be up to a certain cool level to be under consideration. And unfortunately, some of the women in the industry I’m at had to turn their backs to other fellow women by design. If you know, you know. But from time to time I’m fortunate enough to build networks and friendships with other women that share the same wavelength and go forth in this cutthroat industry side by side. Like, yeah, things are not rainbows and giggles— it’s shits and blue sky and we’re in this together.

What’s important is to pursue something that you know your little heart would be proud of because you want to, because you have the urge to, and most importantly: because you believe in what you do.

Yes, what a time to be alive and pursue things that move you— the options are endless. Whatever niche and unique your skillset and your voice is, there will be always a place for you, even if it doesn’t seem like it for now. It could be way over there, it could be right by here. There will be always ears to hear you, a place that celebrates you, or better, you could be the one that creates it for you. So what’s important is to pursue something that you know your little heart would be proud of because you want to, because you have the urge to, and most importantly: because you believe in what you do. Have that core. The rest are still challenging and hard but manageable if you have that core with you.